We took a short break over the weekend and had an overnight stay in Liverpool.  Liverpool is a great example of a city that has faced it's changing fortunes throughout the ages.  Evidence of it's extreme past wealth can be seen - its grand buildings even grander than most other northerm cities and towns. 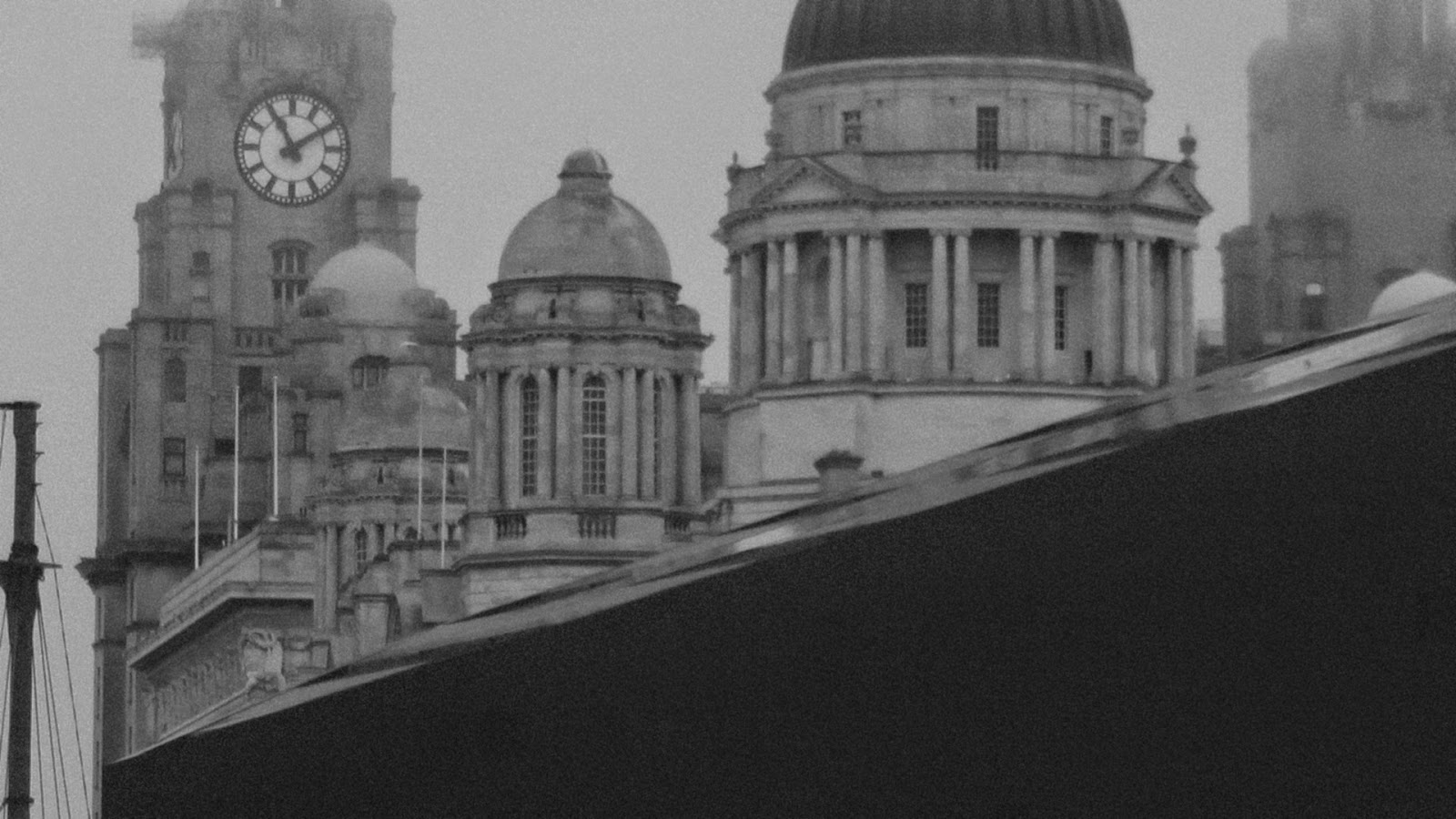 The Liverpool Port Authority building rivals any building in London. 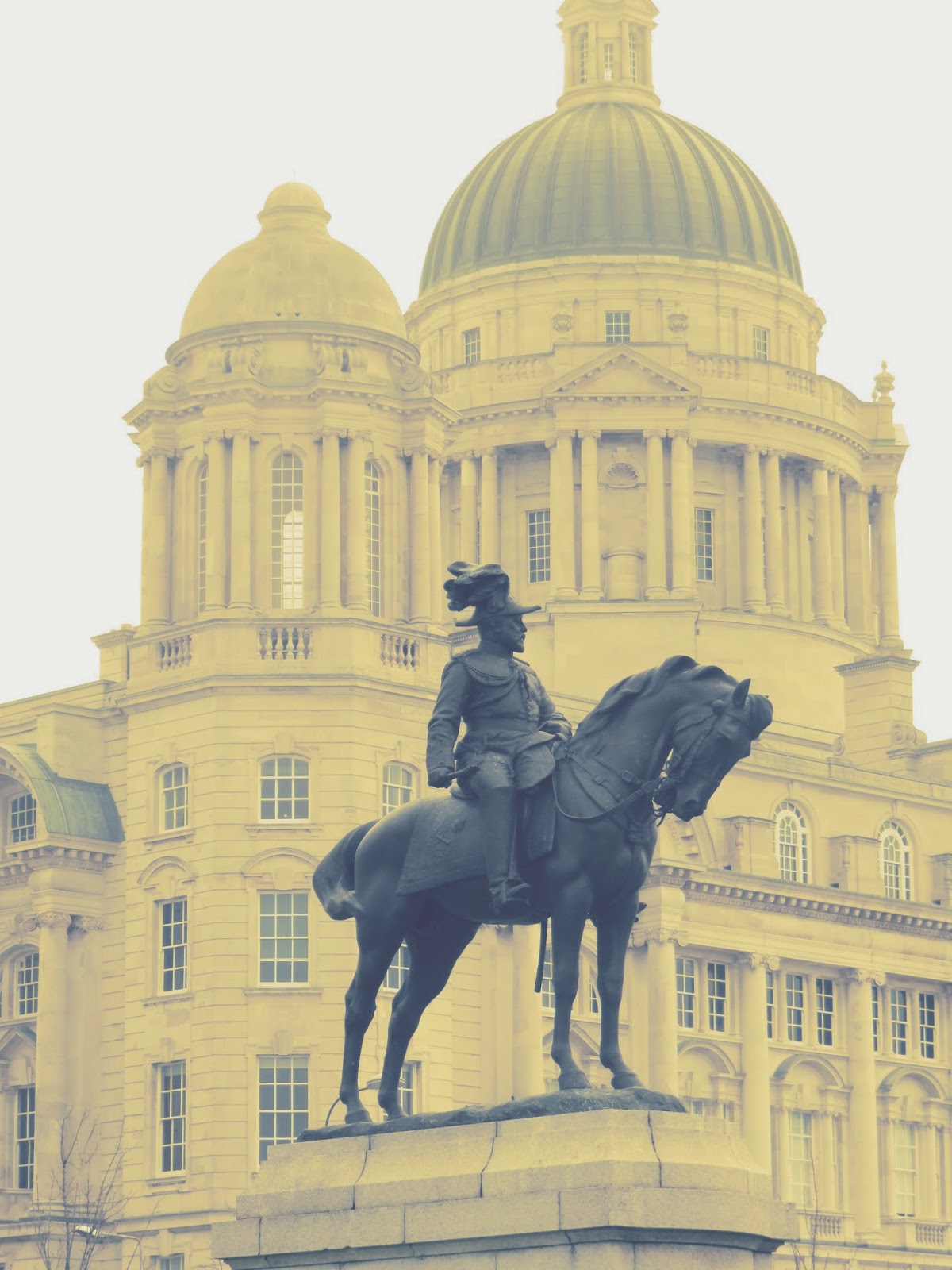 And the Liver Building, one of the "Three Graces" that stand on the Pier Head has clocks that are larger than Big Ben's. 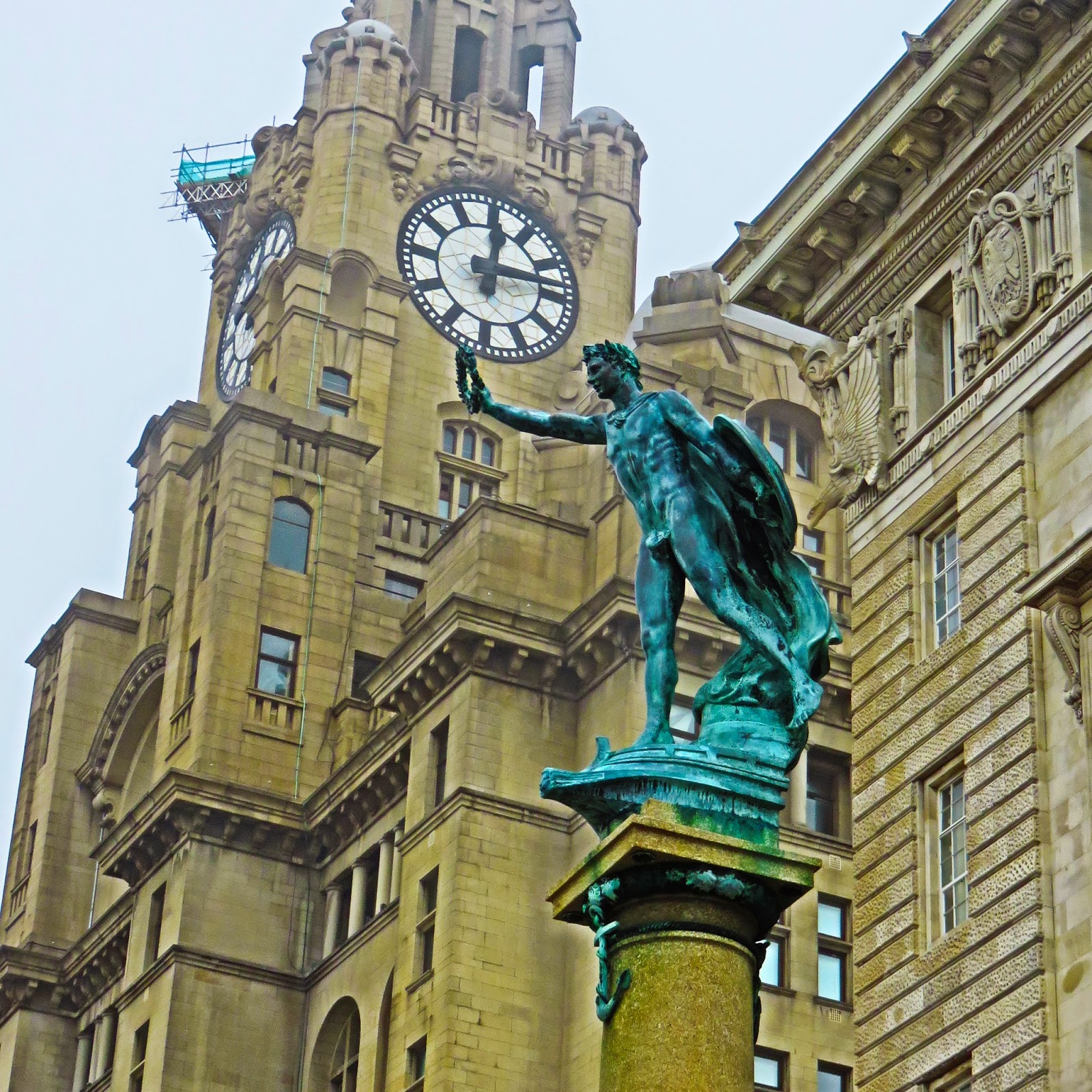 Our hotel was in the restored Albert Dock, one of the many of the huge docks complex that lined the river front in the city for many years.  Many of the other docks have been filled in and the large warehouses pulled down now, but the Albert Dock has been restored and has many uses now. 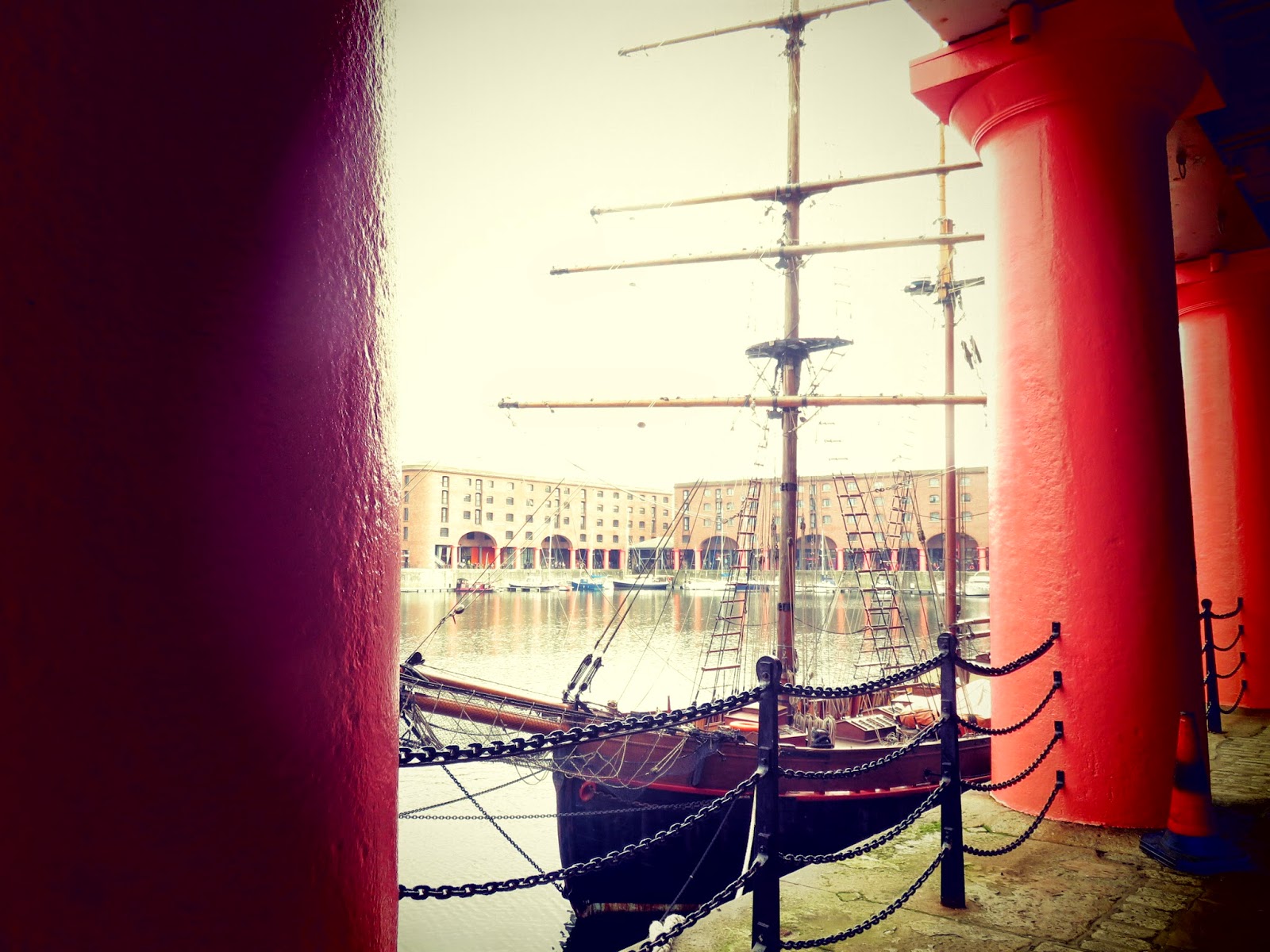 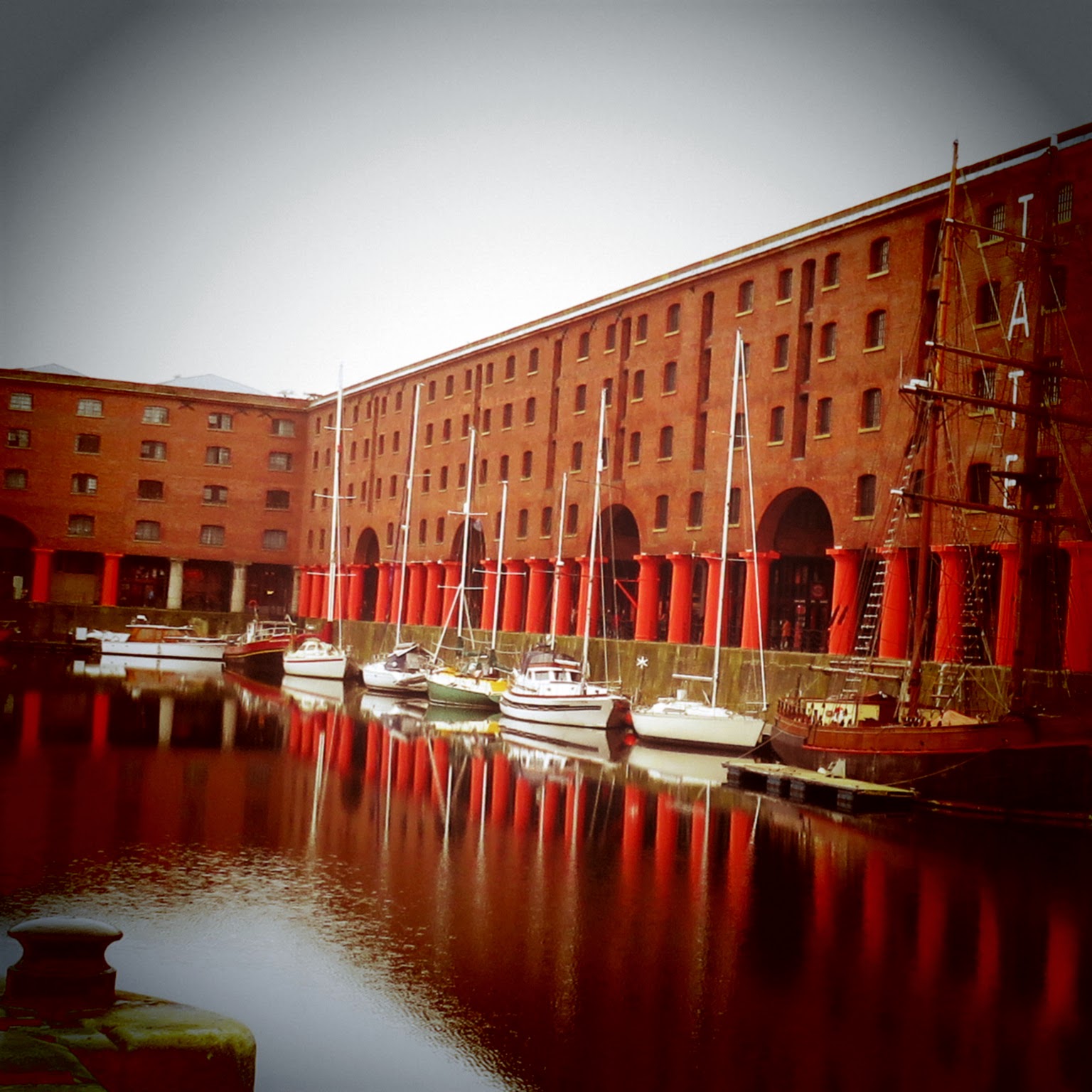 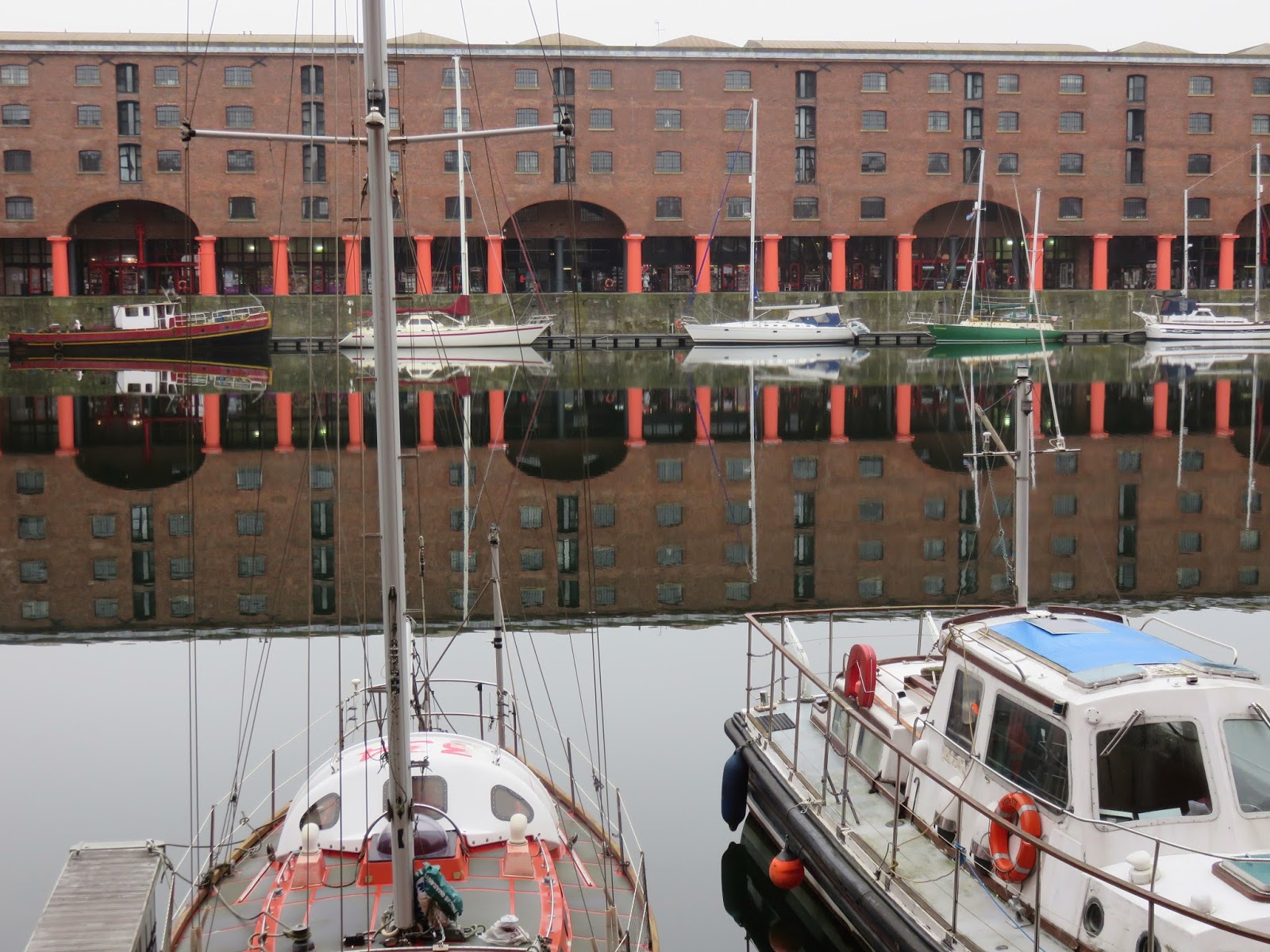 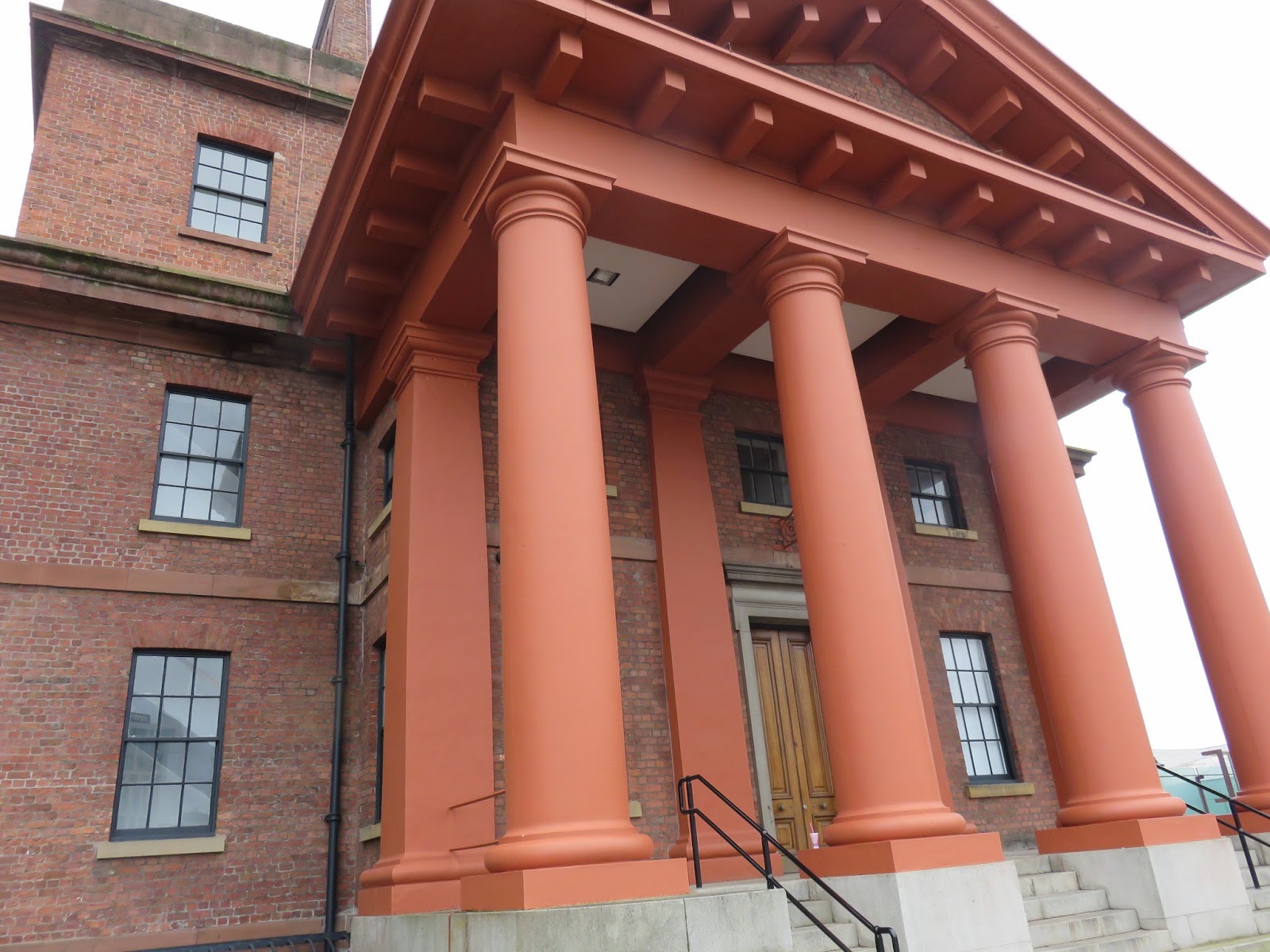 The hotel was handy for the many museums and places of interest along the river front (the River Mersey).  I love this statue of a family waiting to emigrate to America.  The city saw many families leave from here for a chance of a better life, but it also saw many immigrants arrive from the Carribean and China and also from just across the sea in Ireland. 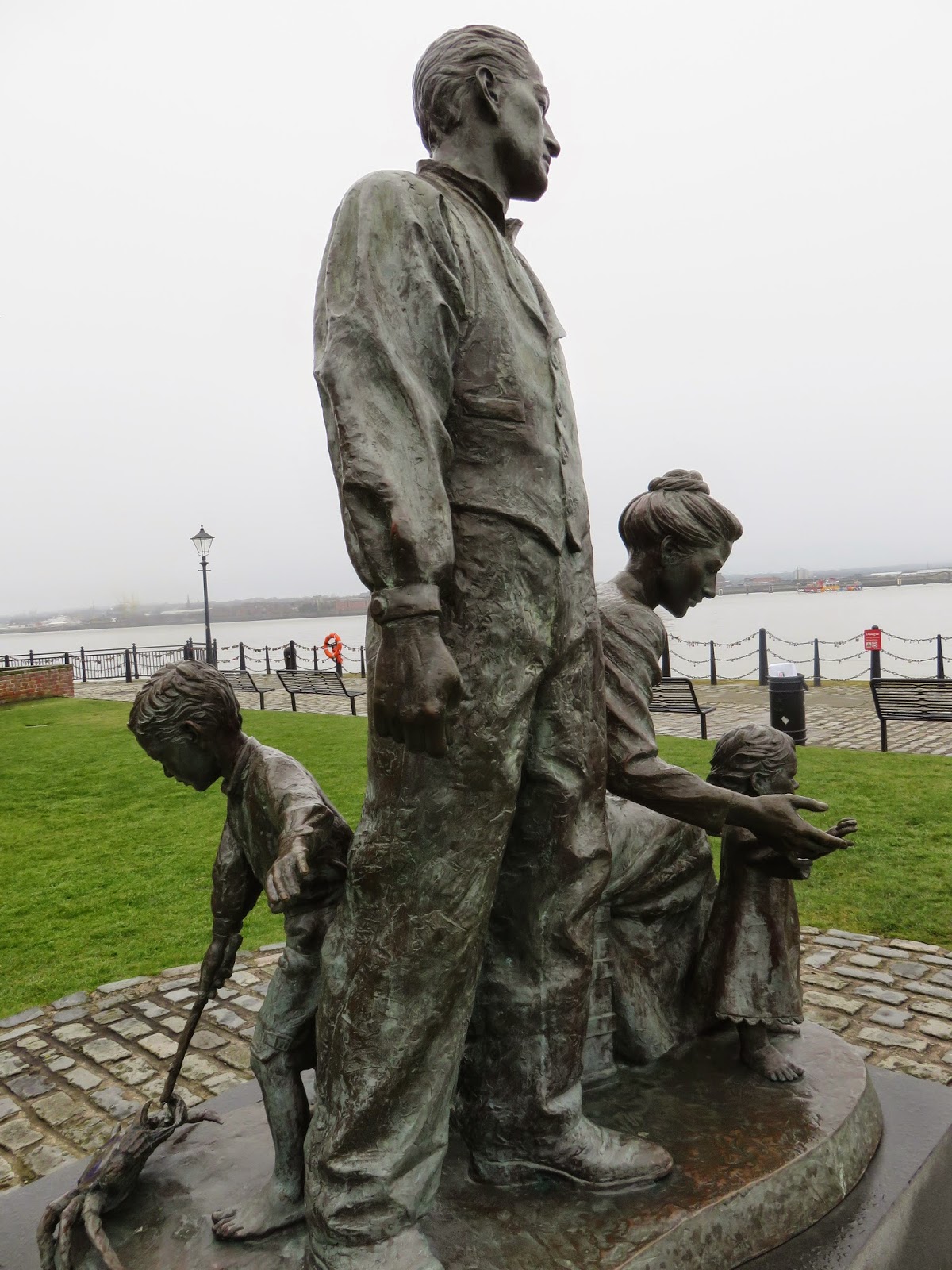 The newish museum of the city history on the river front told us lots of stories about the occupants over the years. 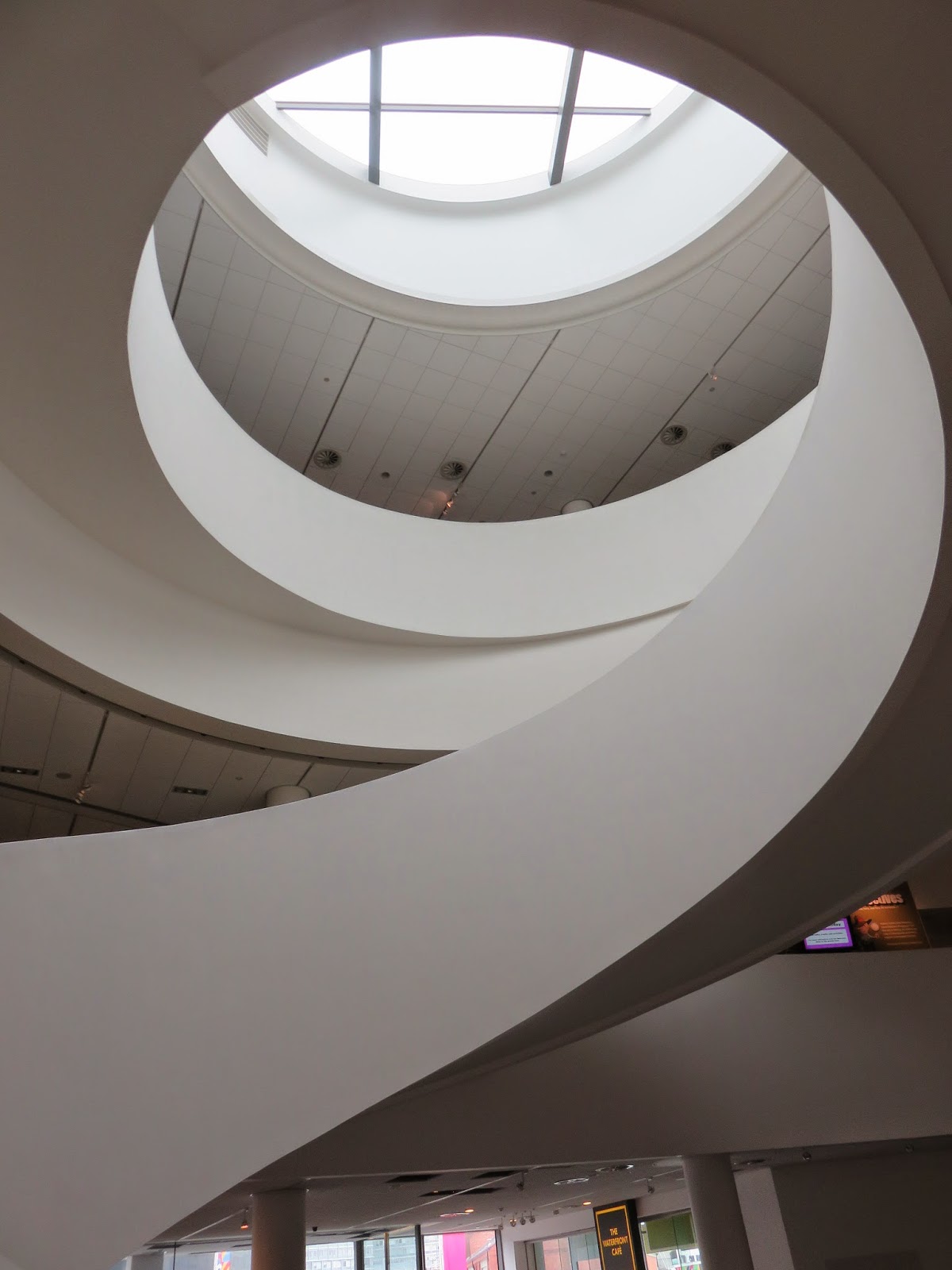 The middle building is the Cunard building. 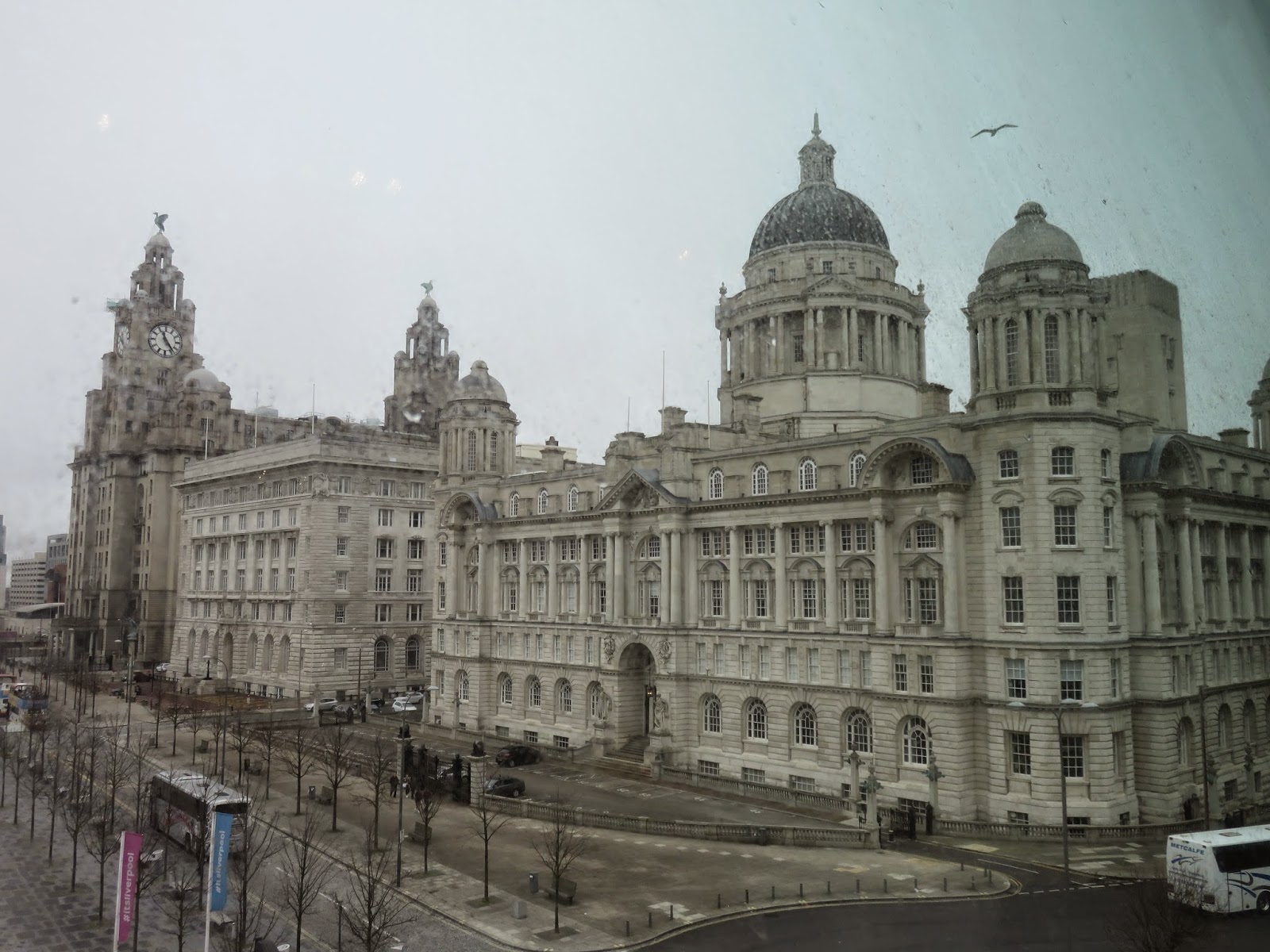 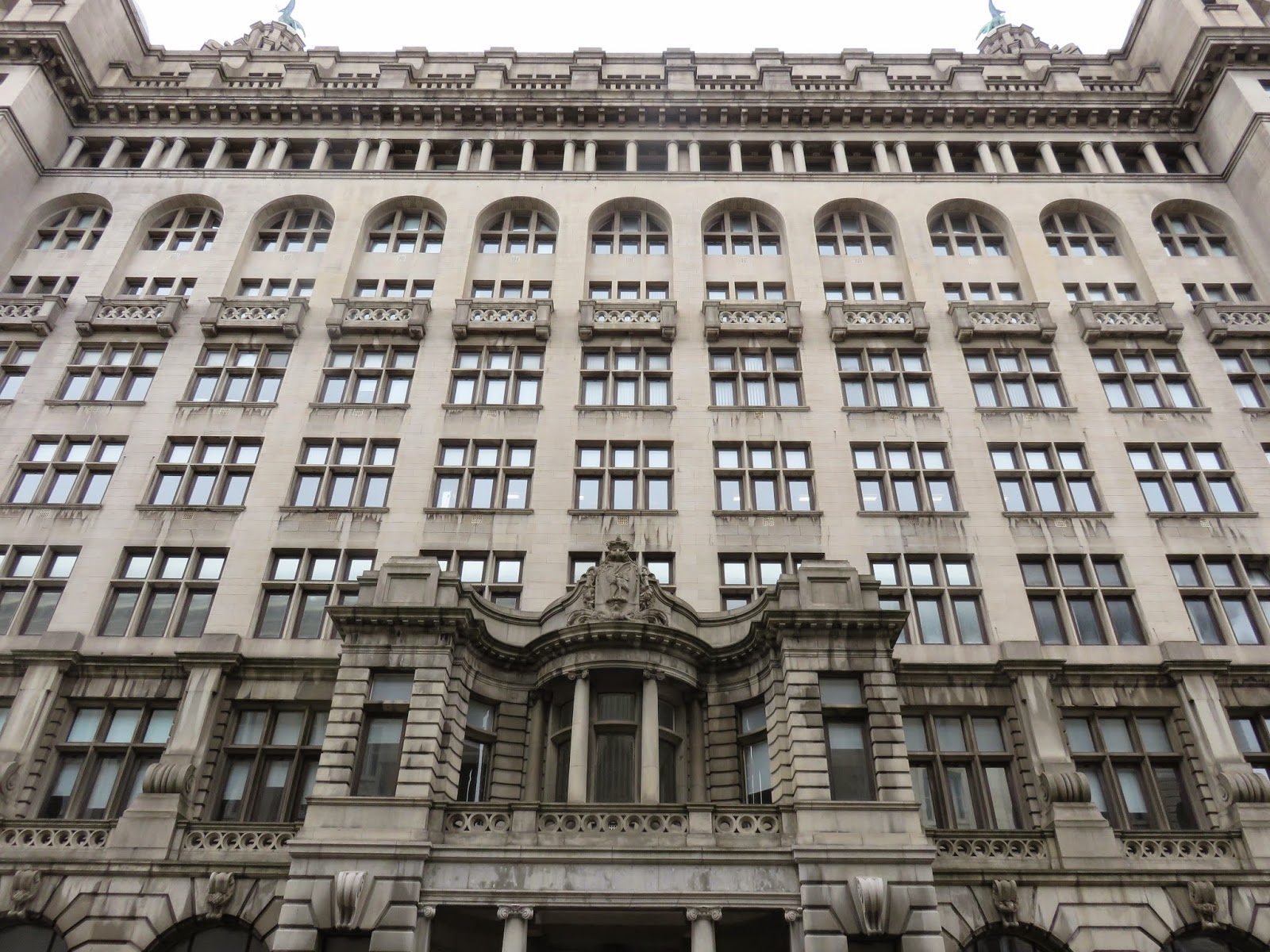 Liverpool was only made a city in 1880 and so the Cathedral is relatively modern, and the interior took us completely by surprise. 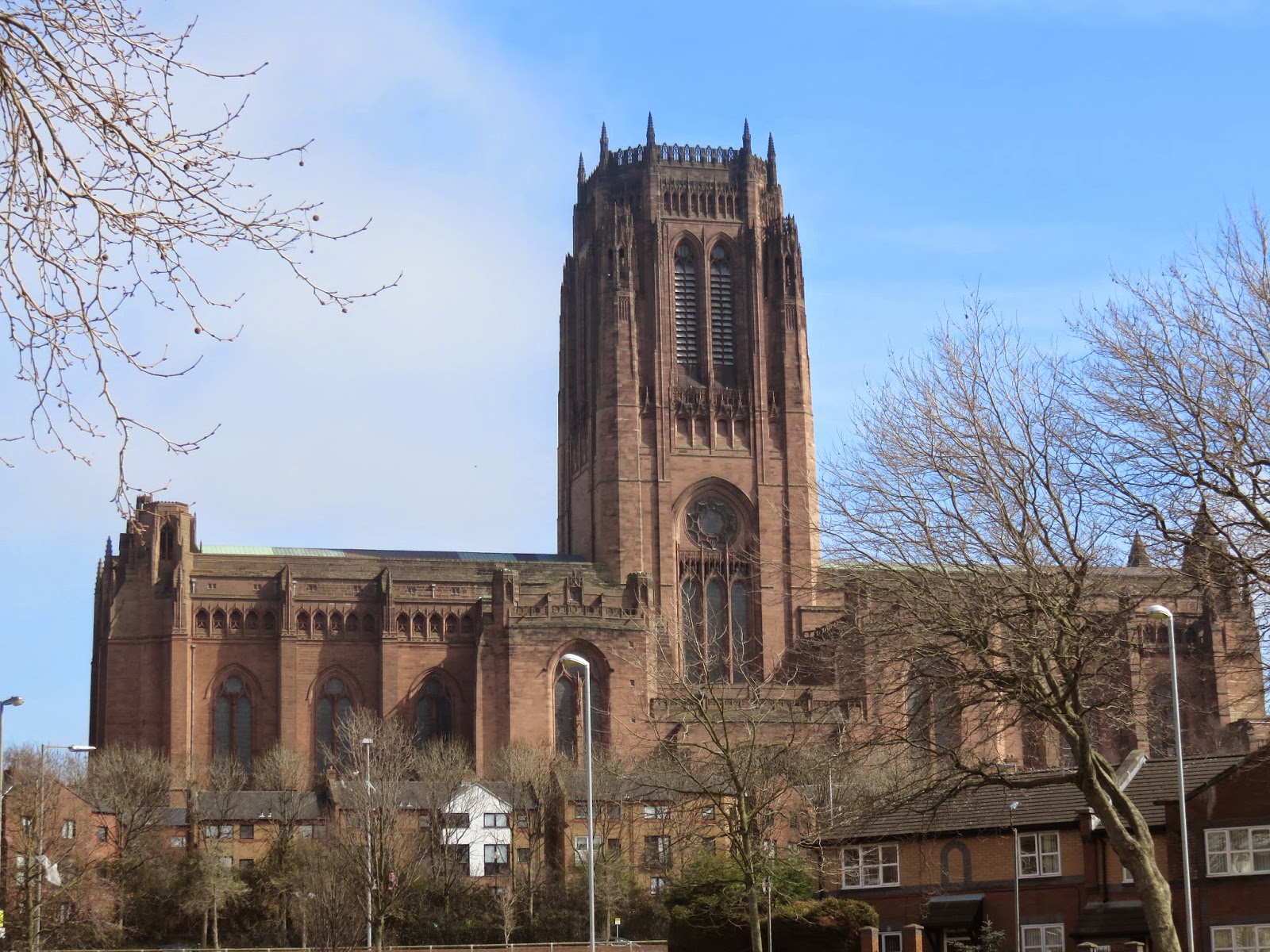 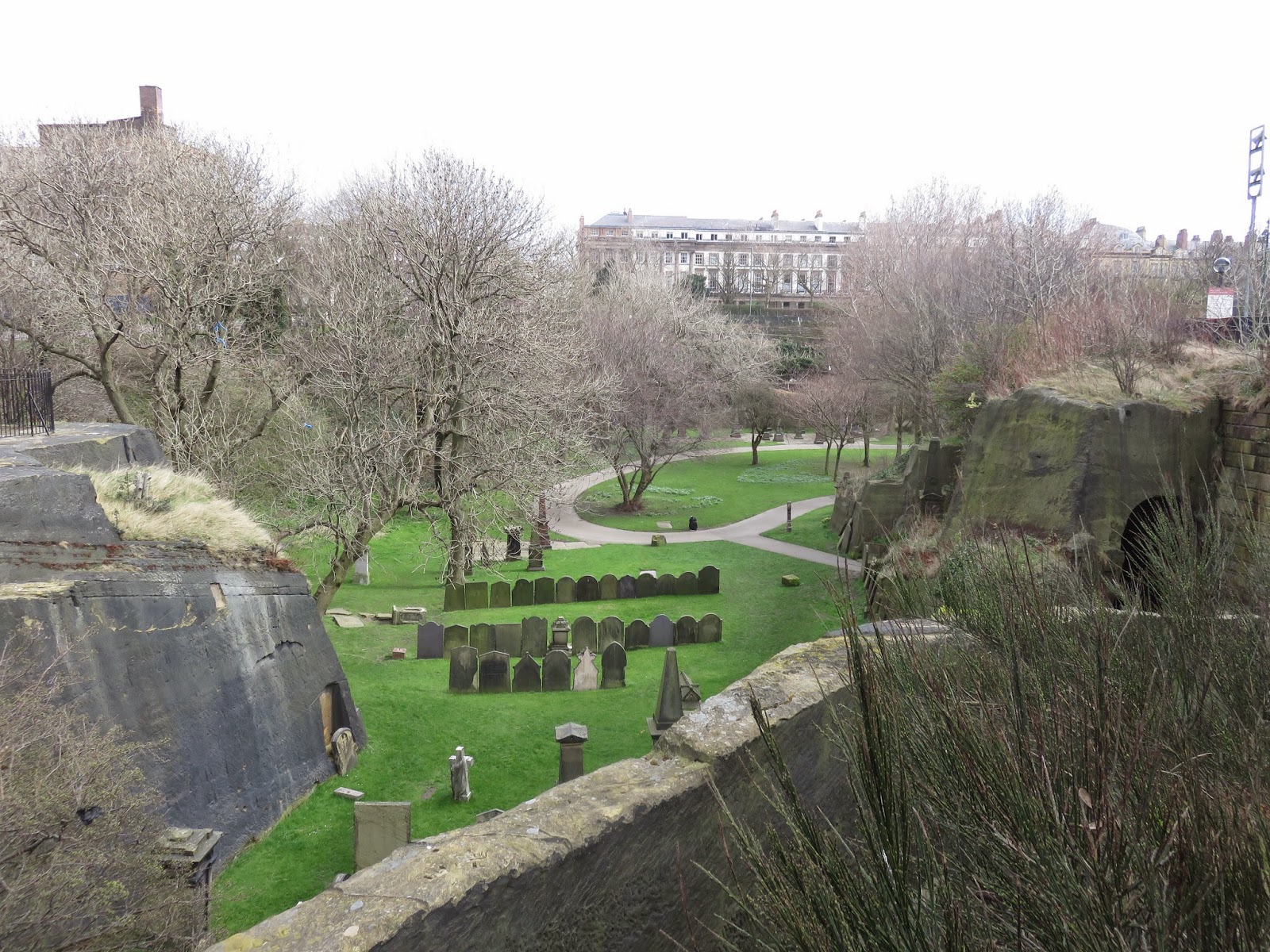 I loved the modern stained glass windows celebrating the ordinary working people of the city. 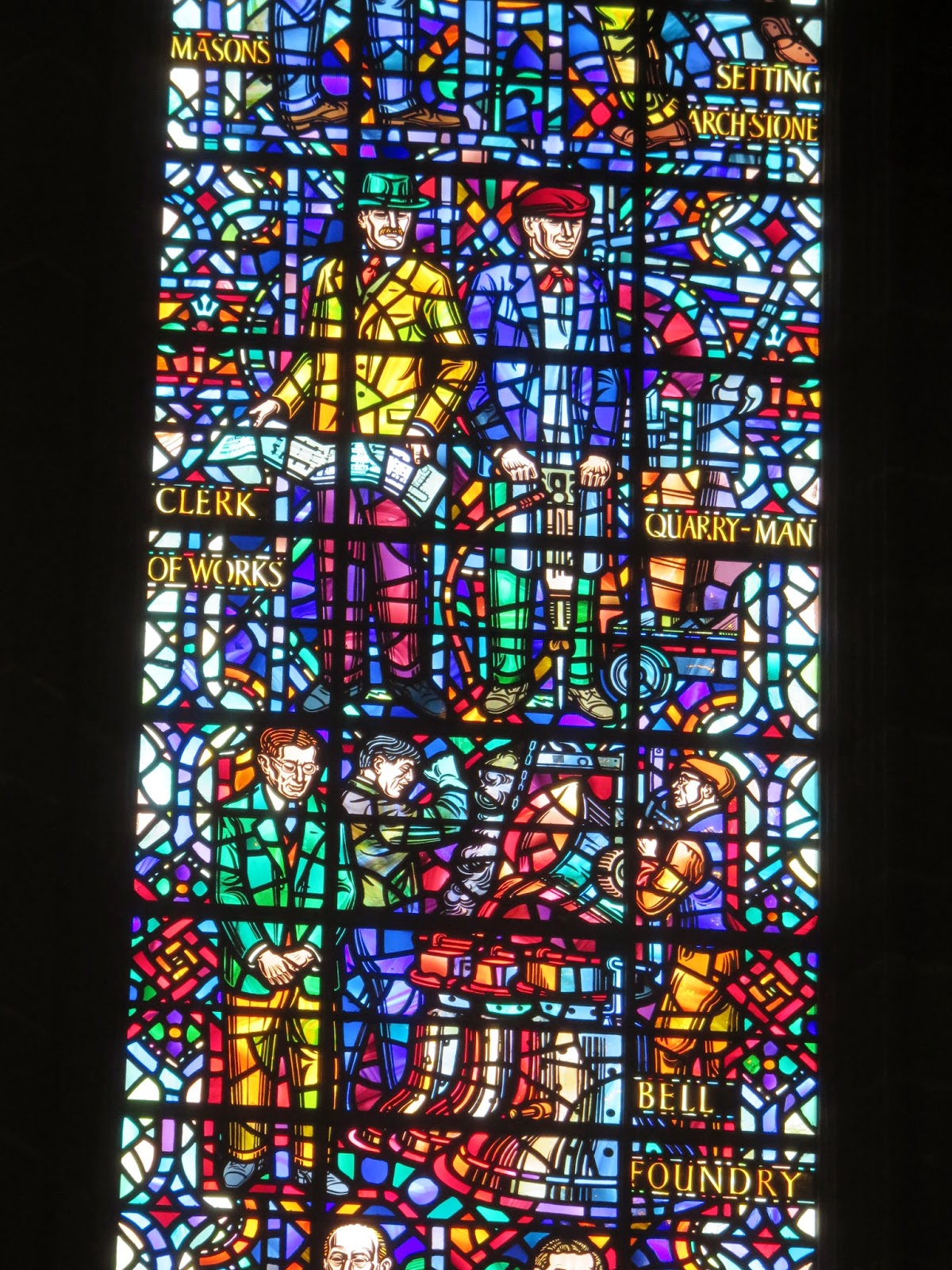 And this modern window of Jesus was striking. 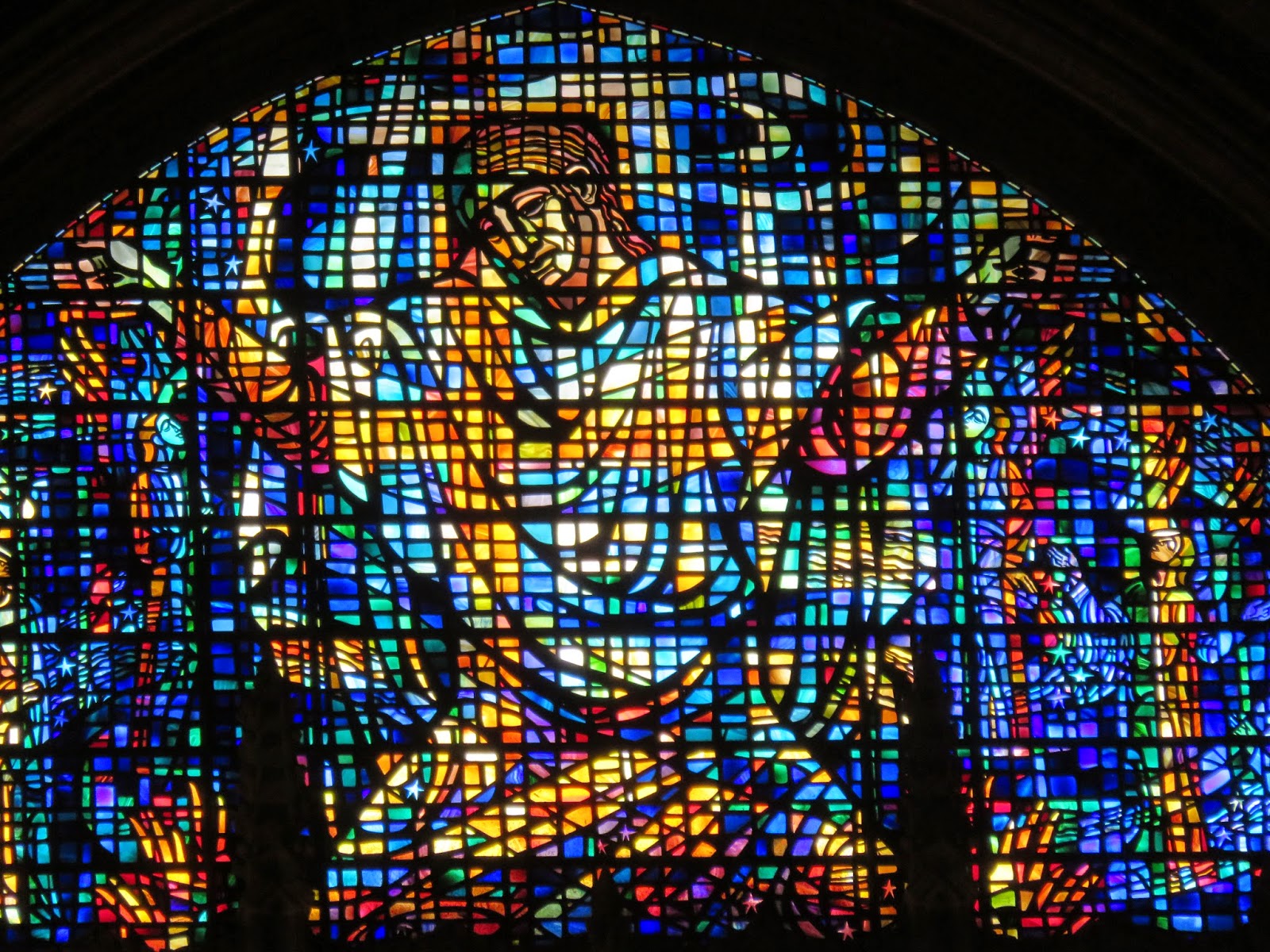 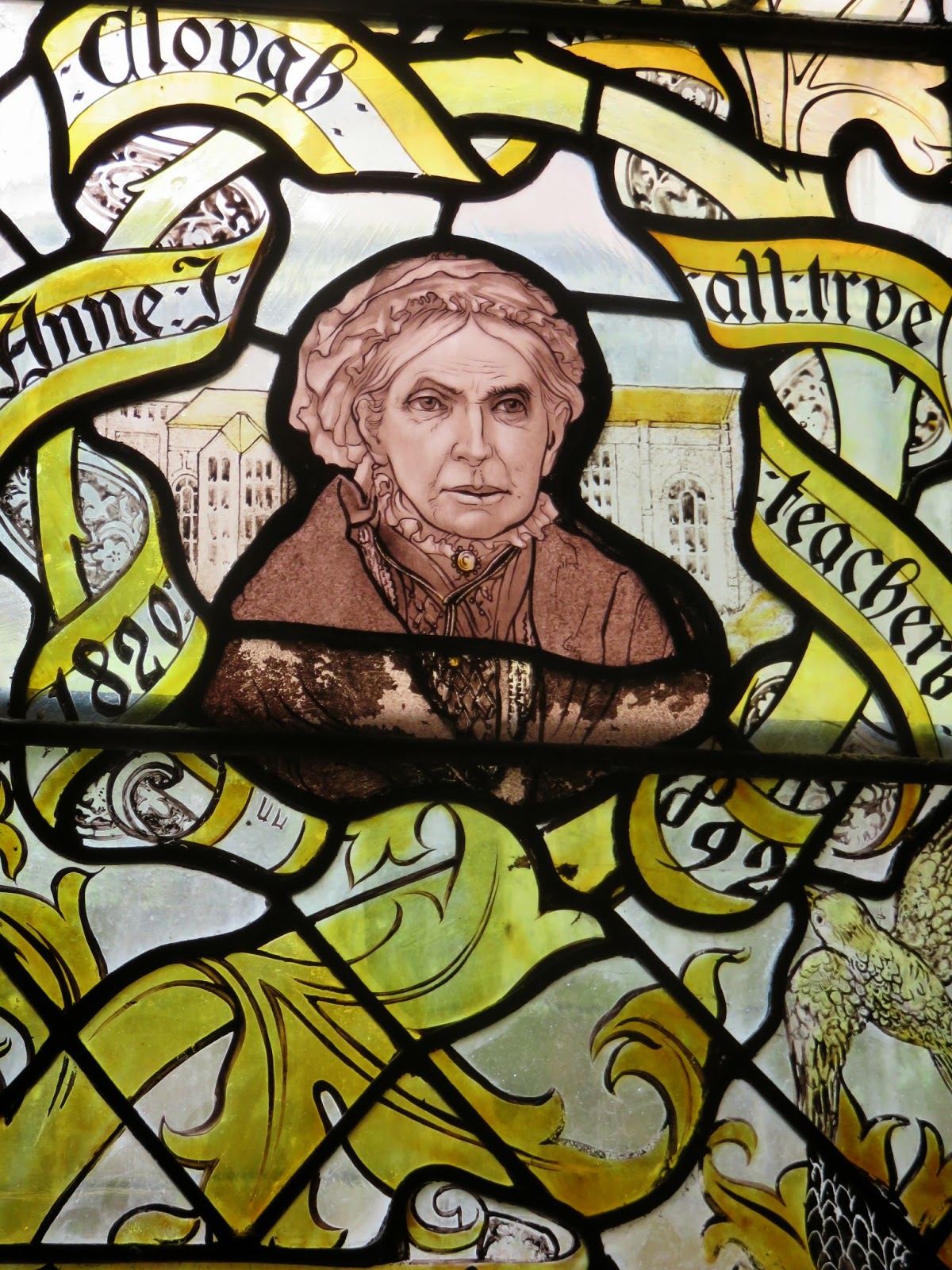 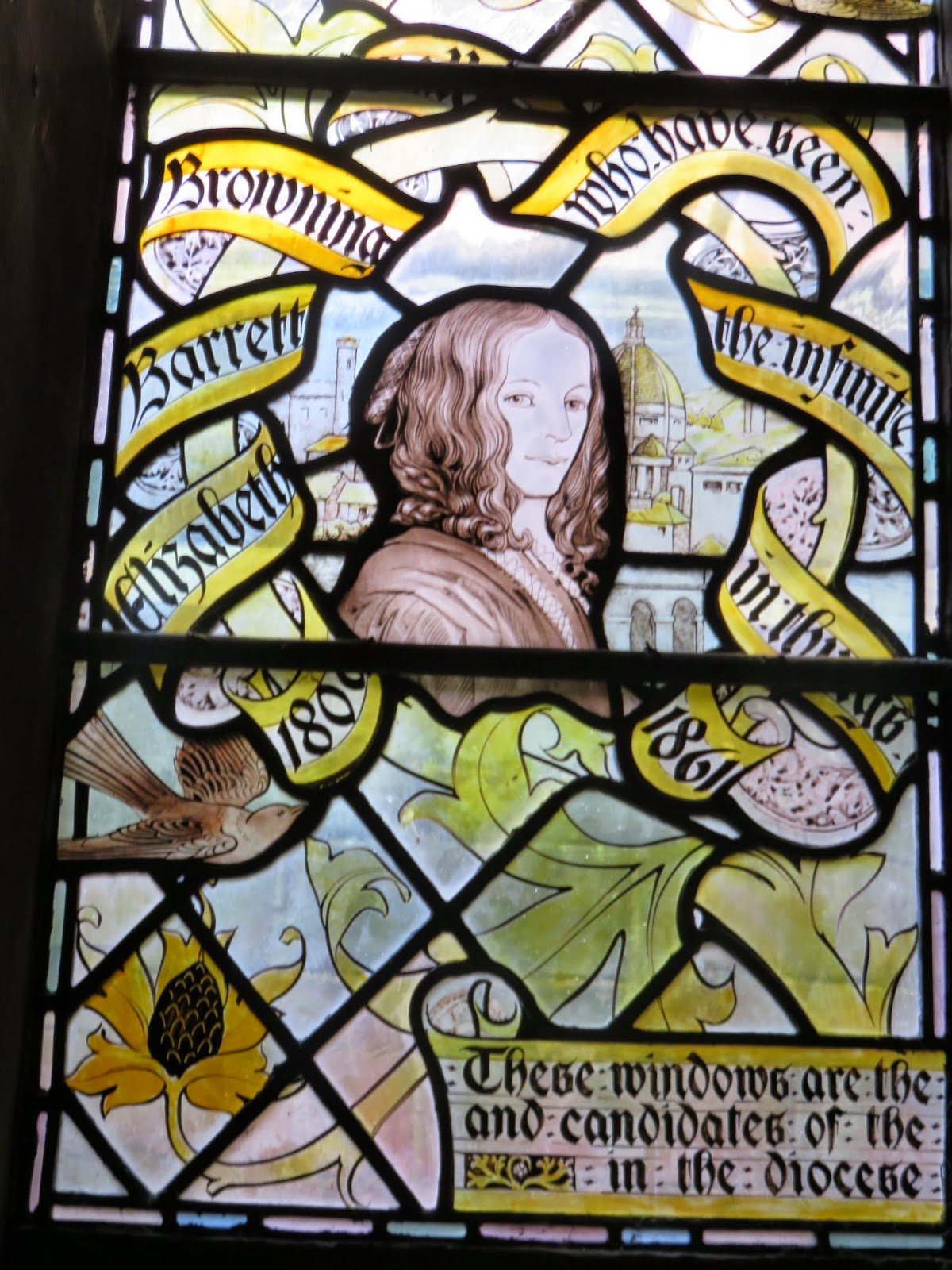 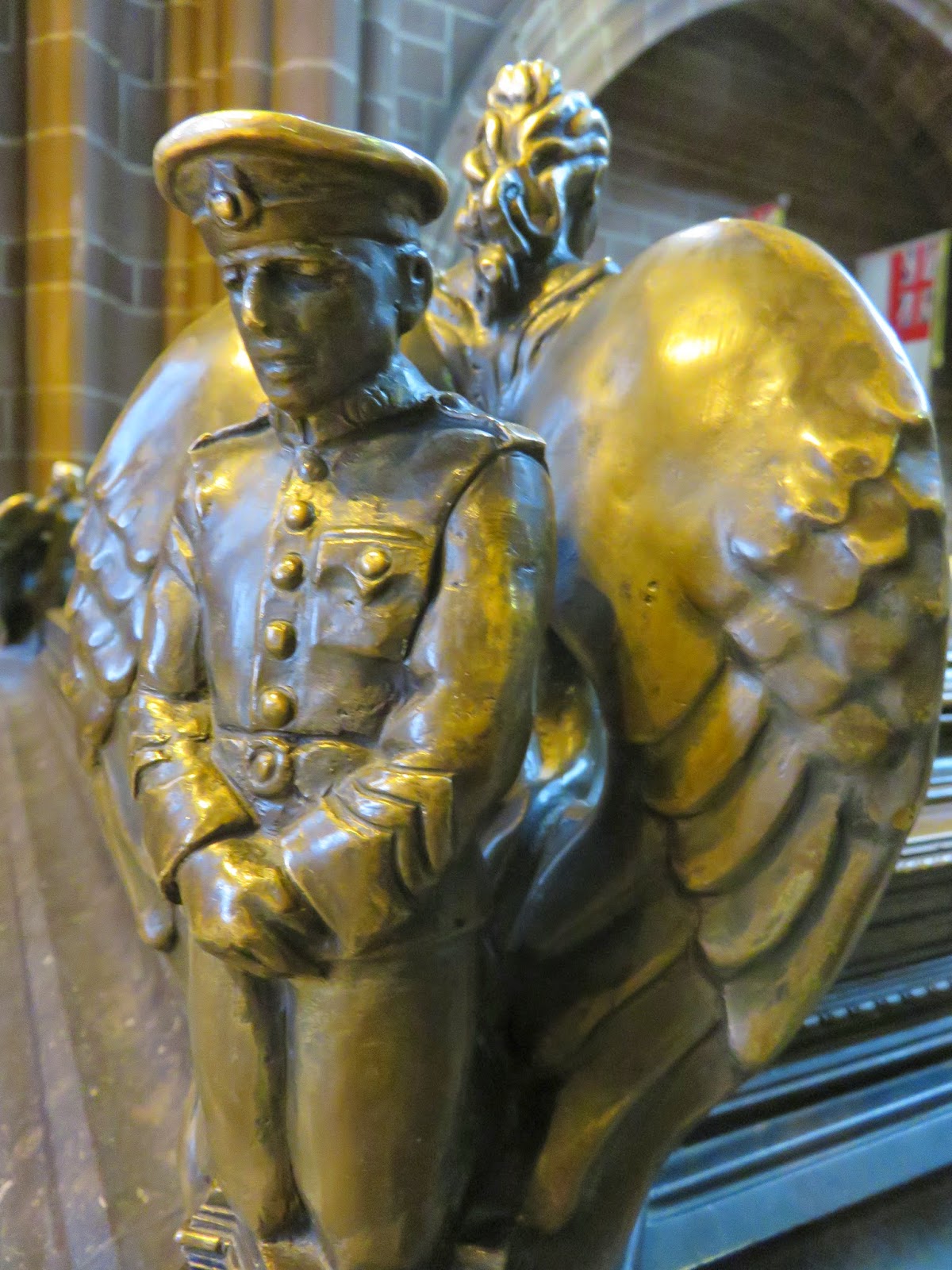 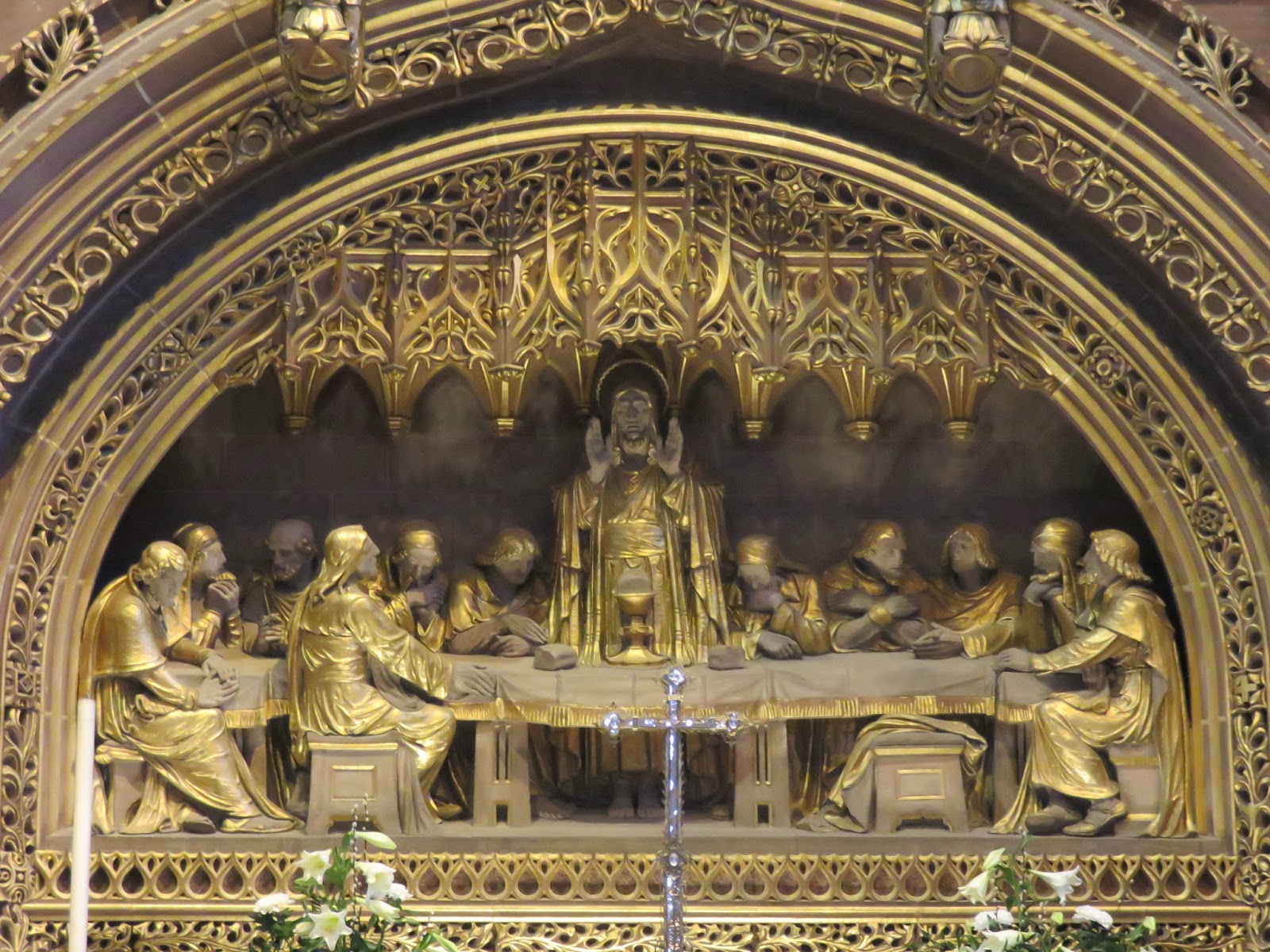 The interior is vast - we didn't expect it to feel so huge. 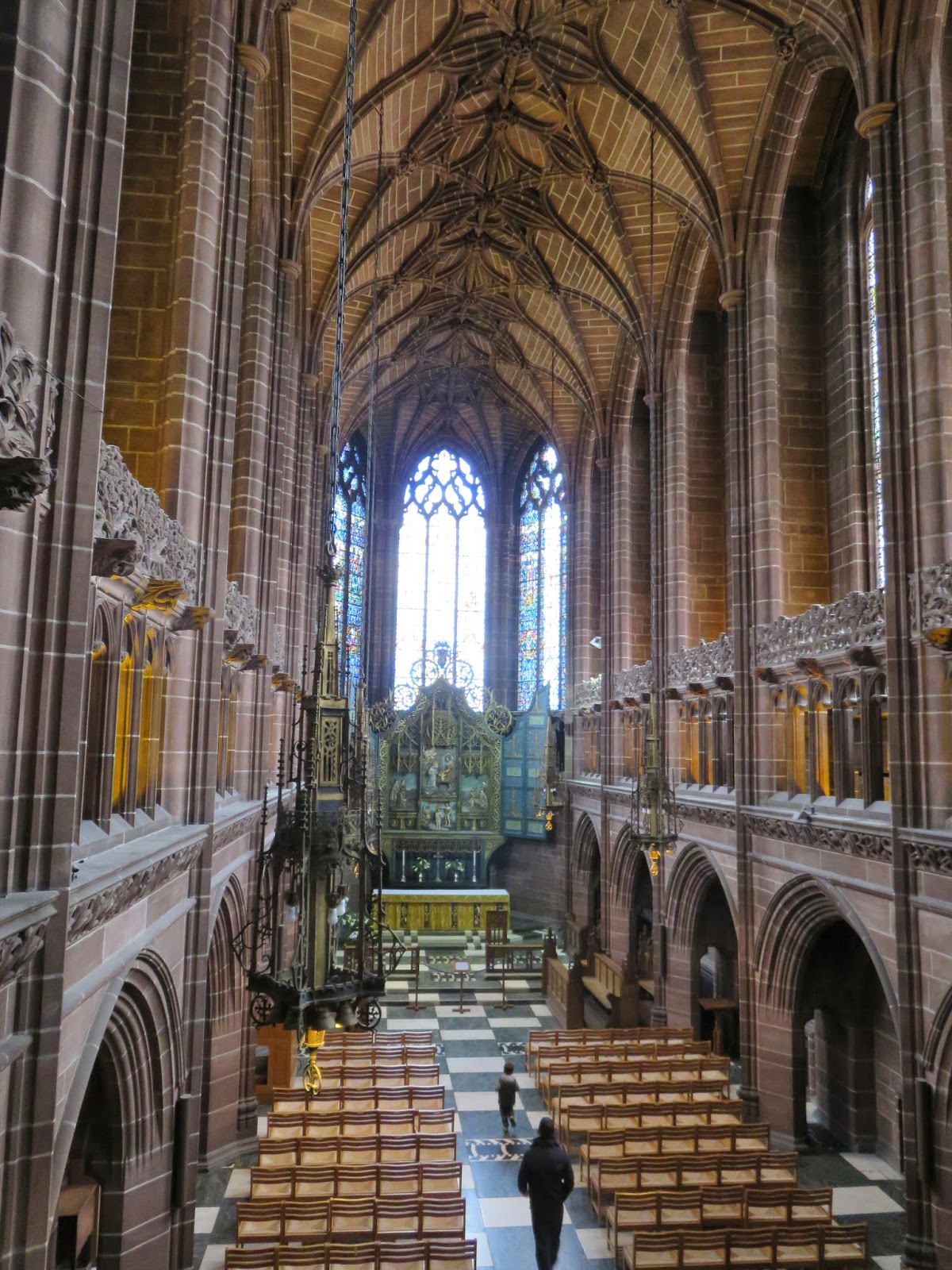 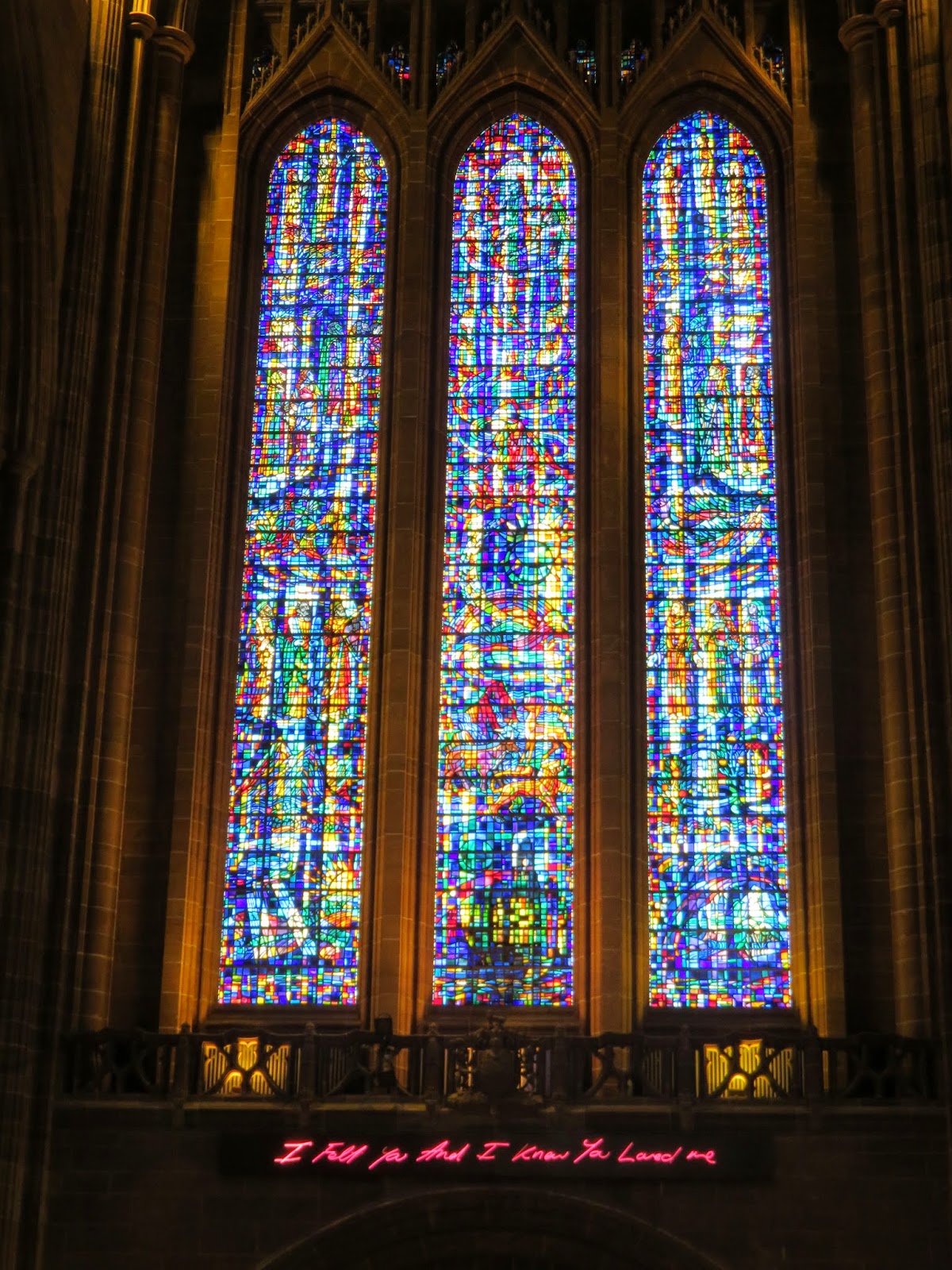 I loved our brief visit to this northern city that is often out on a limb.  It has reinvented itself as a very busy tourist destination now and I'm glad to see it bustling and alive once more.
Posted by Diane at Wednesday, April 08, 2015

Fantastic city - fantastic post. We have just come back from a flying visit there and I feel so much at home that I have even blogged about it!!!!

Have never been but it looks fabulous!!x

I adore Liverpool. Not only is there lots to explore historically but the shops are good (!) and there are some fabulous art galleries. I gather that towards the end of May three great ocean liners are going to be moored in the port - the Queens. I'd love to see them but I'll bet the city will be heaving with visitors.

It all looks beautiful. What a great venue for your weekend away. I just think of This Morning when I see those red pillars!
Lisa x

A link that I think you'll appreciate;
http://www.buzzfeed.com/jackmurray/reasons-why-liverpool-is-the-worst-place-on-earth?utm_term=.ccpo87kXz#.lsZGW2Dz6

And I love Liverpool; it's a cracking city, full of lovely people! (and me, as well!)

We are hoping to visit soon as Paul wants to photograph the Pterosaur in the World Museum. The cathedral looks stunning inside ans I've enver visited the new Museum on the docks - looks like more than one day is needed. Glad you had a great time:)

It is on my list of cities to visit. Thanks for the taster.

I found your blog through a link over at Gentlework, and I've been browsing through your back posts. Your photography is STUNNING! I haven't been to the UK in several years but through your photos I feel like I'm right back there. I didn't get to visit nearly as many places as I would have liked, but until I can visit again I shall enjoy these lovely places through your blog.

YOU WENT TO LIVERPOOL WITHOUT ME!!!!
glad you had an enjoyable visit and lucky you staying over. The photos are wonderful.
xxxx