The railway station in Sheffield was given a huge makeover a few years back. Its now a pretty station where the "old" has been preserved and mixed very well with the "new". 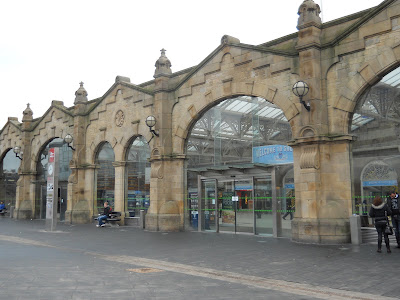 The Edwardian refreshments room - The Sheffield Tap - has also been restored to its former glory and sells Thornbridge Ales from a local micro brewery. It had previously been derelict so someone did an amazing job here. Hubby recently did a train pub crawl, calling at stations along the line that had station pubs serving local Ales. Oz Clark and James May did it on their "drinking" programme once. 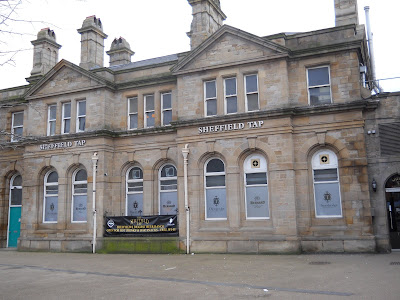 When the station was getting a facelift, the construction of the spectacular water features outside caused much traffic chaos, but I think they were worth it. The HUGE stainless steel water feature lights up in the evening too making it look even more spectacular. This area is known as Sheaf Square .
The rivers Sheaf and Porter Brook now run under here before they join the Don further down past Ponds Forge. I was amazed to read that in the 1700's there had been dams here that were filled in to make the railway station. 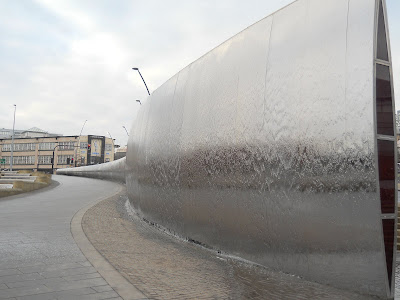 The stone fountains too have lovely detail. If you ever arrive at Sheffield Station, dont hurry past, take a moment to appreciate them. 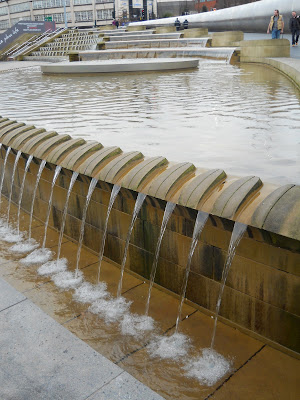 Once you have appreciated the water features, cast your eyes up towards Sheffield Hallam University. We like to Welcome you to the city with poetry. We are far more cultured than we appear! 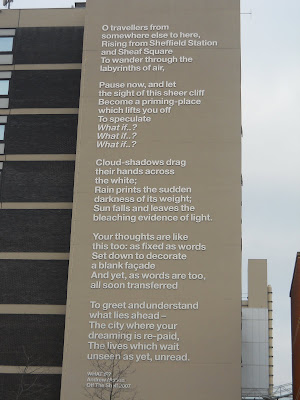 You can wander up the hill to the cultural quarter which features the galleries, museums, theatres etc. On the way up another lovely water feature trickles down to meet you. 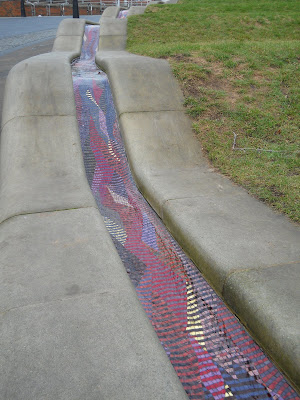 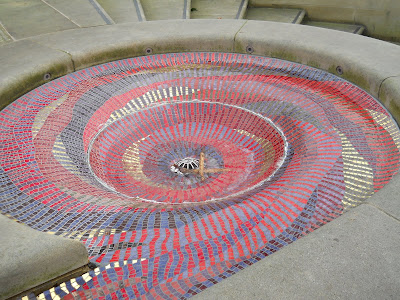 To the left of the hill is where a lot of the cutlery manufacturers were and as well as having some lovely old brick buildings around here which have been converted and used in all manner of interesting ways - homes, university buildings, workplaces, restaurants, art spaces - there are also lots of original traditional style old pubs. We are losing so many pubs in the UK at the moment, its good to see these thriving (thanks mainly to the student population I think!) 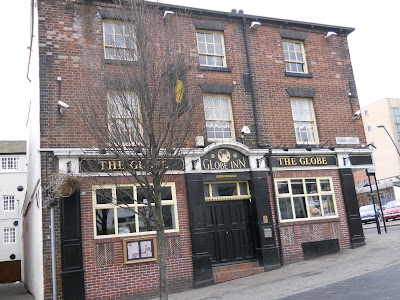 I like Sheffield but Dave and I haven't been for over a year... next time we are going I think I will look into getting the train instead of driving and have a nosy around the station. I must be sure to see that water feature too i it looks impressive!

I'm not sure who you really work for but I think you would make a very good tour guide.
Don't stop pubishing.

Oh sorry Diane, if it is the same be prepared for the long haul!!

Totally know what you mean about tena lady!! I made a similar remark on facebook!!

Stunning water feature, what a brilliant first sight of the city travllers get by train.
Lisa x

Those water features are amaaaaazing, I would love to see them at night. It is good that they preserved a lot of the old features of the station. It seems to combine quite well with the more modern part. Diane

Grand photos and I'm especially intrigued by the colorful mosaic fountain path ( for lack of a better description!). We tore our lovely old train station down years ago. Folks here in Birmingham are still mad!
V

Betty is at uni in Sheffield and often frequents this hostilery. K is partial to the Sheffield Tap I once went with him but it was so busy we couldn't get in.

We must visit Sheffield again soon and look at all the sculptures and water features near the station. I remember when I was younger and still living at home every December we would catch the early bus from the village to Chesterfield then the train from there to Sheffield and then rush across to another platform to catch the train to York for christmas shopping. So glad they have preserved parts of it as it was:)

Oh the steel water feature is so beautiful - I'd certainly stay and watch the water flow for a while!
Thank you for sharing your town with us :-)
Denise x

Fabulous photos yet again Diane. Blimey the station has changed a lot since those days (too long ago now) when I used to pitch up there).

There are some really beautiful parts in Sheffield, and they certainly know how to do water features!

I have a lovely memory of carrying a little one through 'Coles', wet through to her britches after a spontaneous splash in the water fountains in the peace garden square....

I am so enjoying thease posts!

Great photos, Diane - and wonderful info - Sheffield should employ you as its ambassador! I've never been there, but you're really tempting me! Abby x

Who'd want to drive to Sheffield?!!

Hi Diane...this is about the white hair post...It is going well. I have almost all of the old coloring cut out at this point and got a new haircut which made my naturally curly hair come out to play. It really covers the whities quite well and now, alas, I do look my age :).

the station is lovely! isnt it!

right the next time I do sheffield I will let u know!
u can meet me in ALL BAR ONE for a wine!