On Easter Sunday, we wanted a place to visit that would suit the hubby, the young man and me.  I thought Spurn Point would do nicely.  Lots of interesting rocks for the Geologist to analyse, Lots of Militaria relics for the hubby to get giddy about, and plenty of beach combing and photo opportunities for the blogger.  We came here last year and the changes environmentally after this years winter storms is immense.  For years, man has tried to preserve the very long spit of land that protects the Humber Estuary, but the current thinking is that they now need to allow the spit to move.  The young man also told us that Groynes built to protect the seaside resorts further north have had a detrimental effect on the movement of the sand here on Spurn Point. 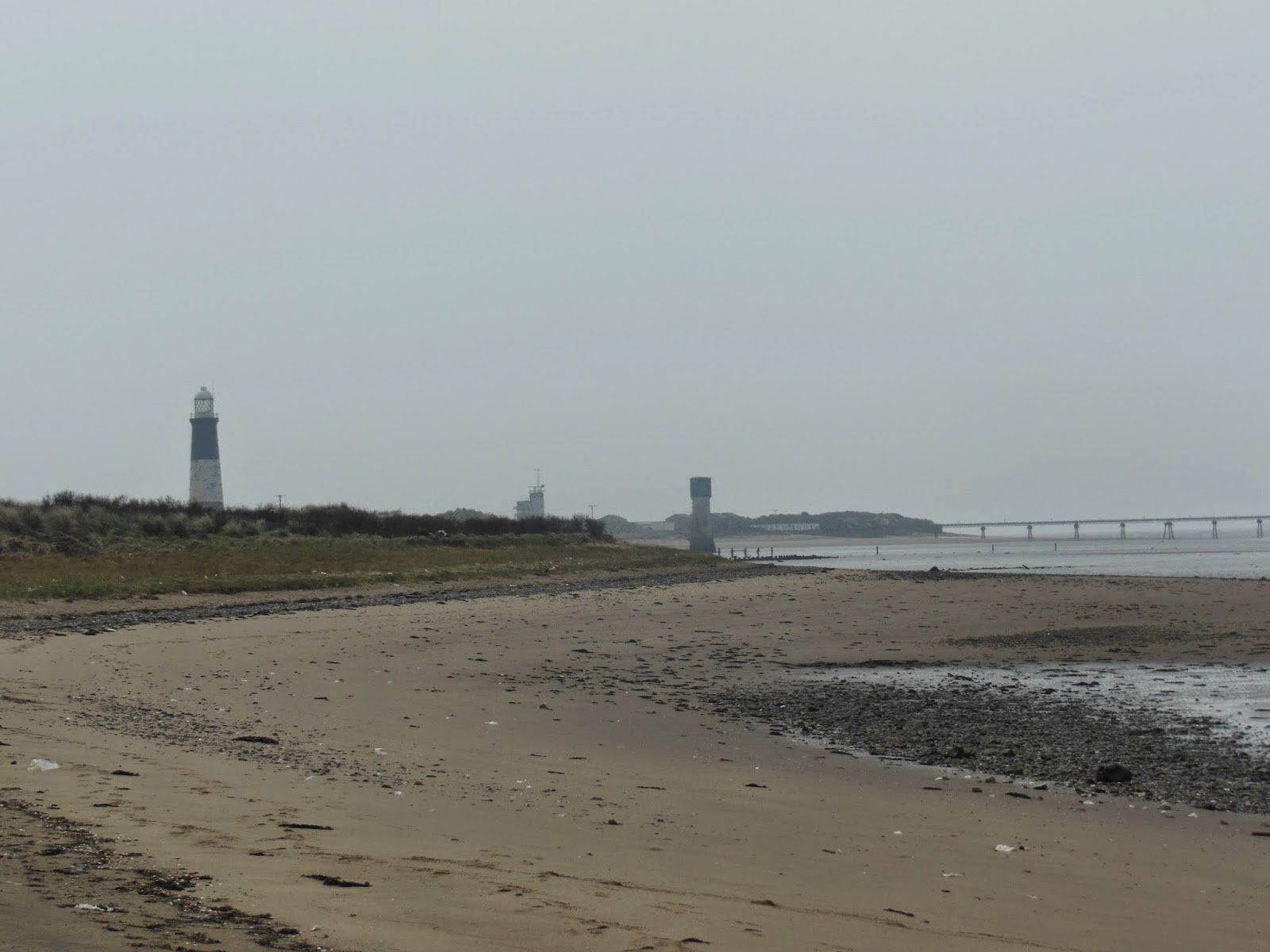 Yorkshire Wildlife Trust look after the area and they have some really interesting artifacts and information in their very small shed - well worth a look inside. 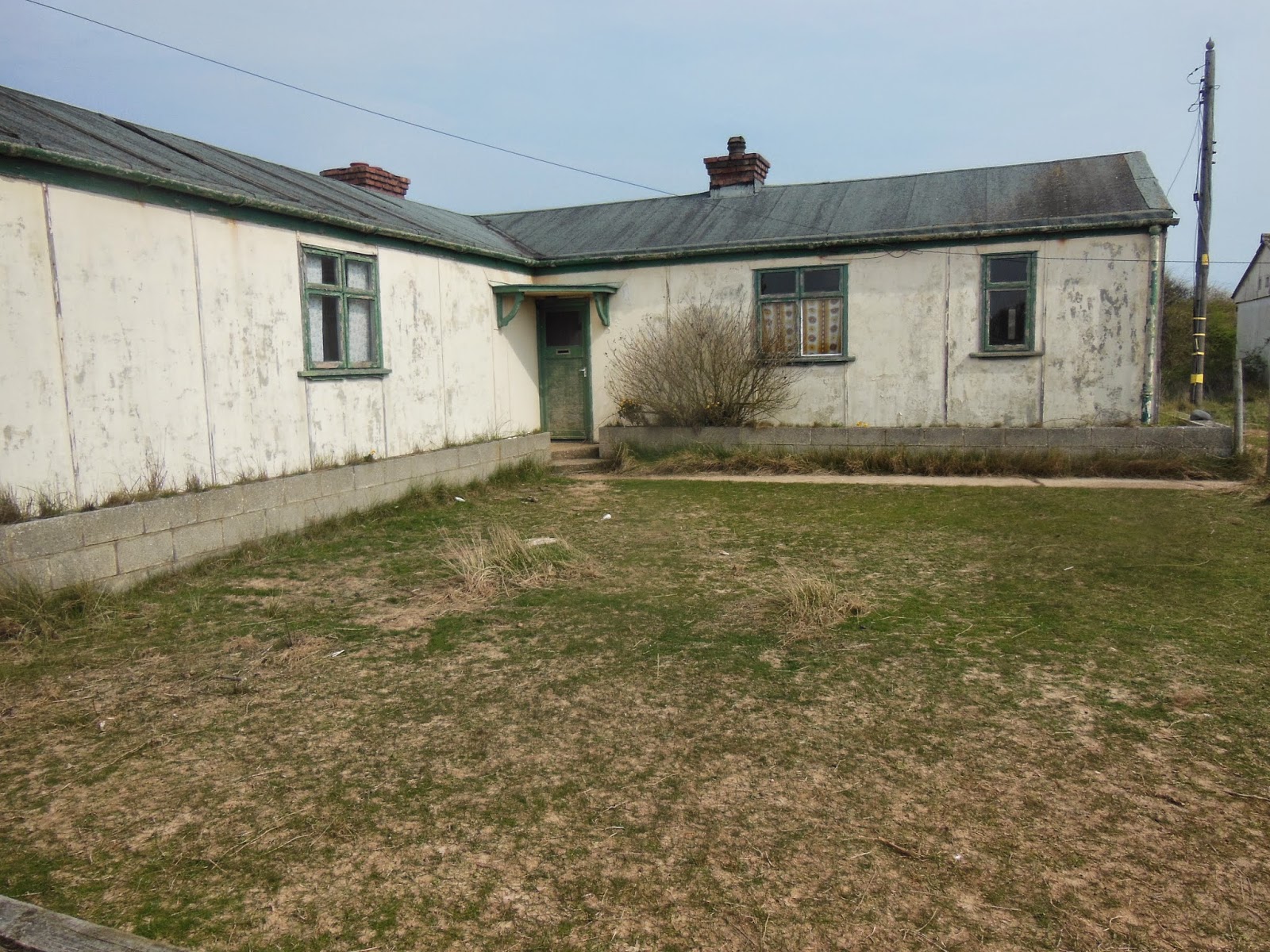 The Mammoth tusk on display was washed up about 7 years ago.  I found this truly amazing. 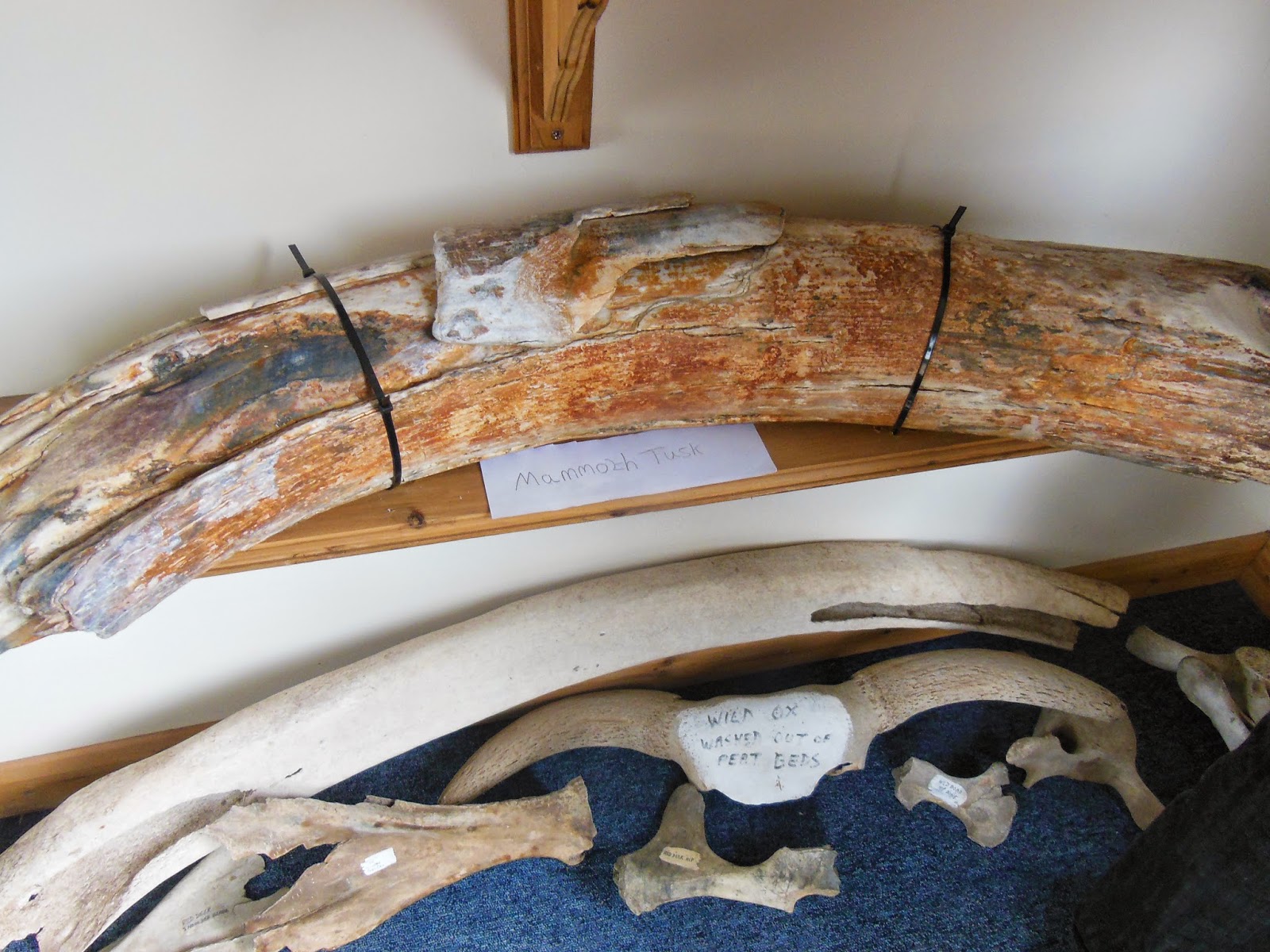 Lots of items are washed up on this 3 mile spit of land.  The driftwood that washes up is spectacular. 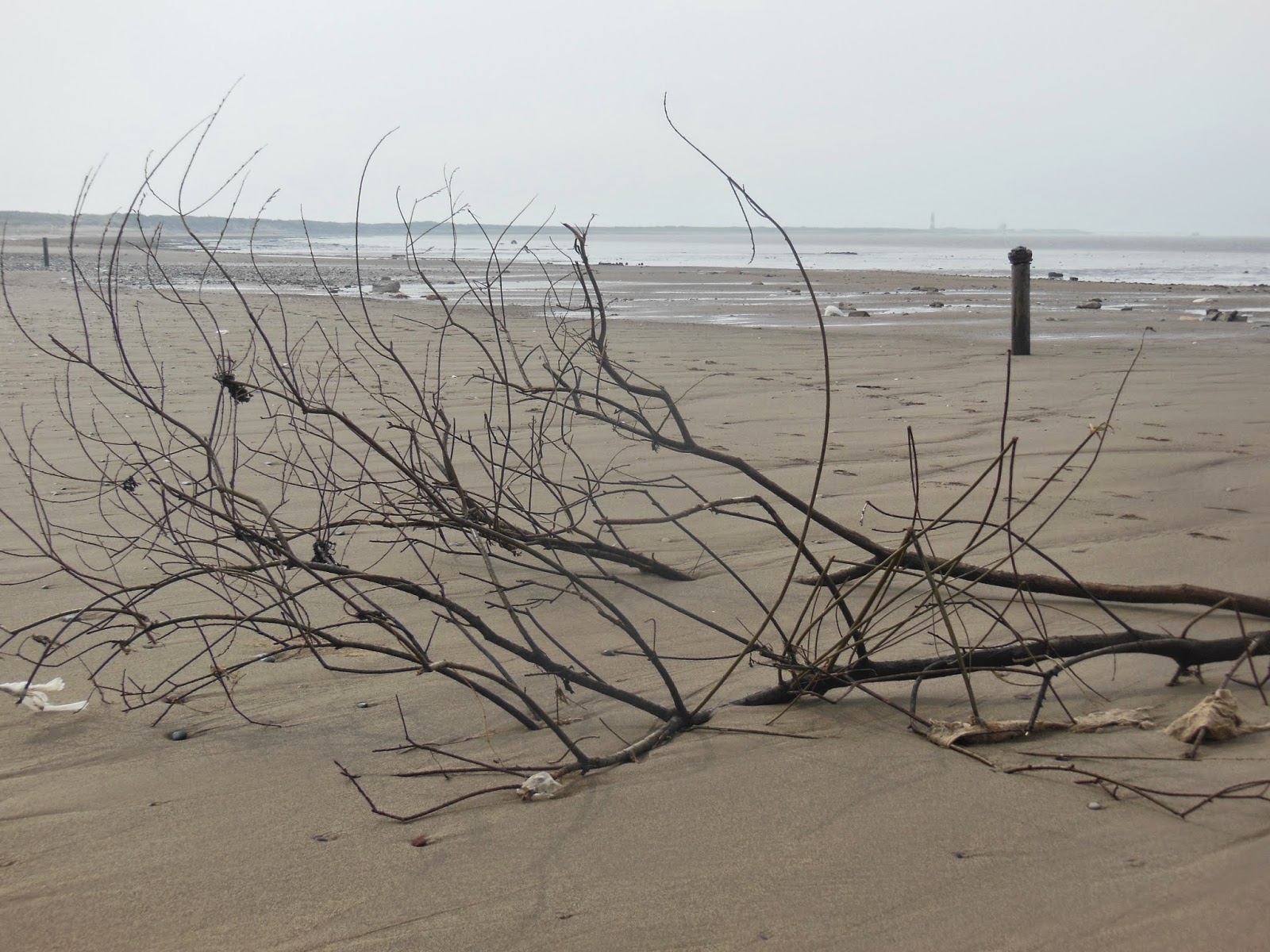 When we visited last year, the old road that had crumbled away was still visible.  This year it is buried under tons of sand.  Up until last year, 12 Lifeboat families had lived at the end of the spit.  The families have all had to move out now as they cannot use the road anymore.  I believe the lifeboat men live in the houses for a few shifts at a time now. 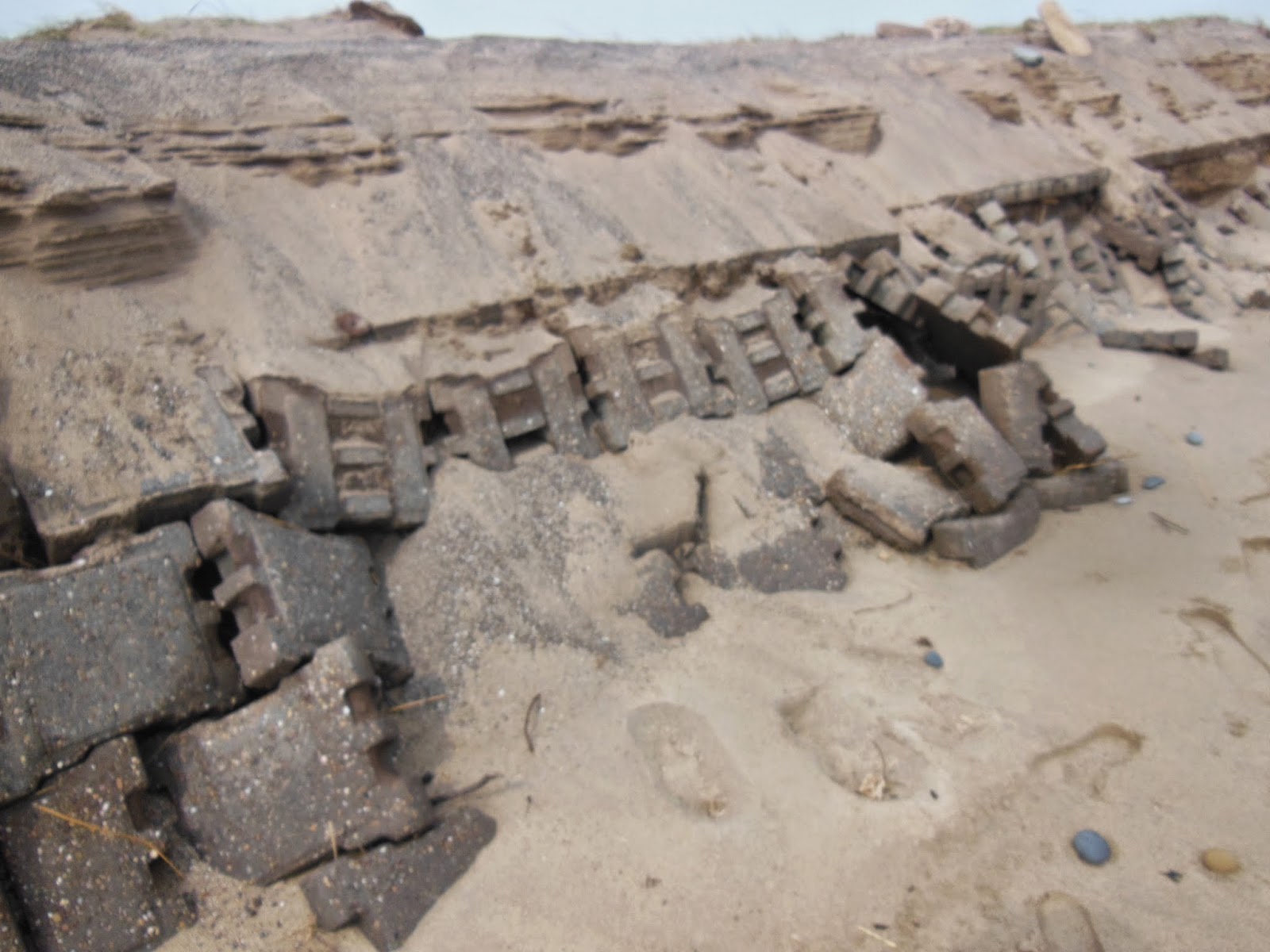 The sea side of the spit is littered with anti tank blocks which remain from World War 2.  I think hubby inspected every one of them! 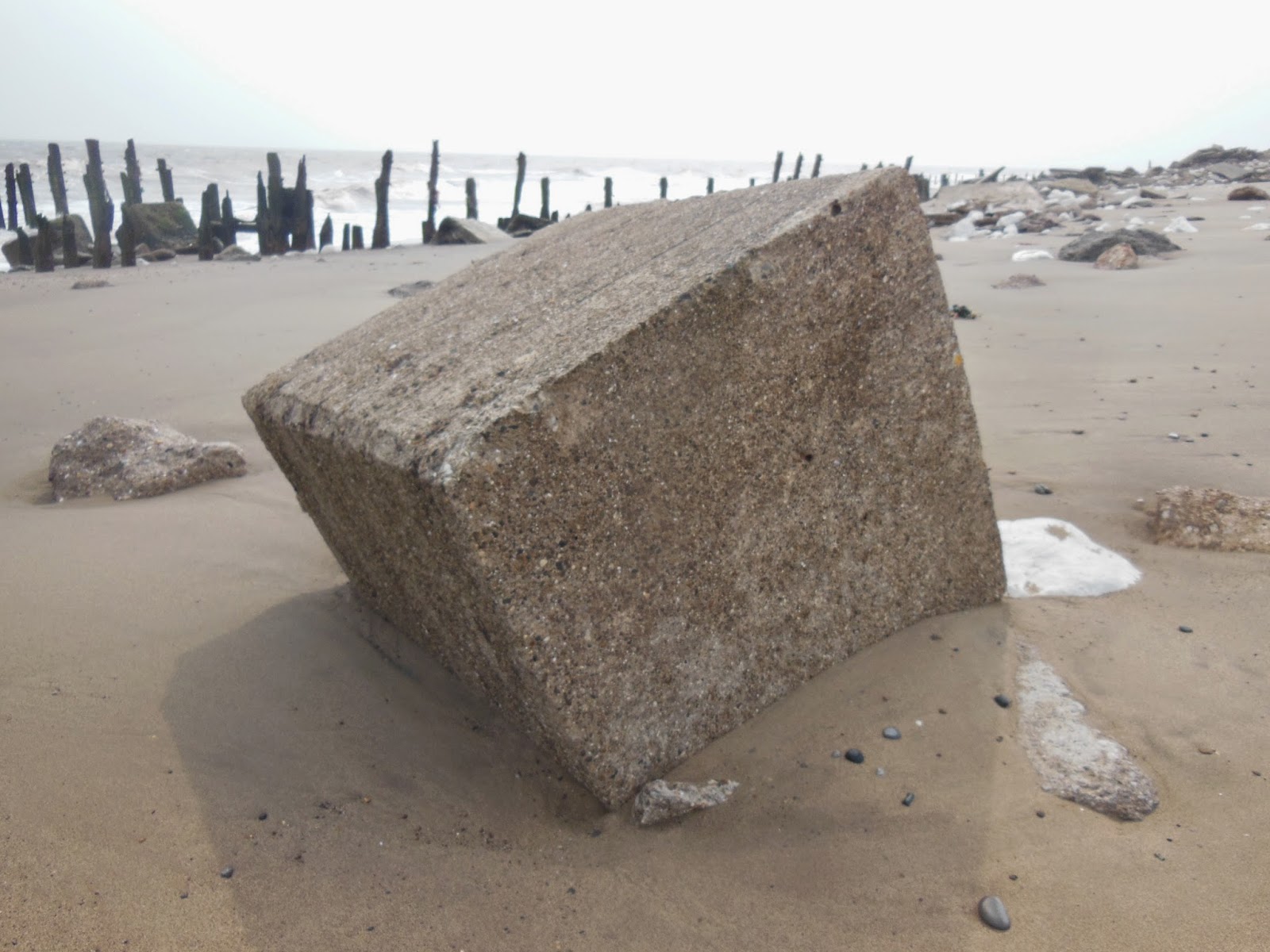 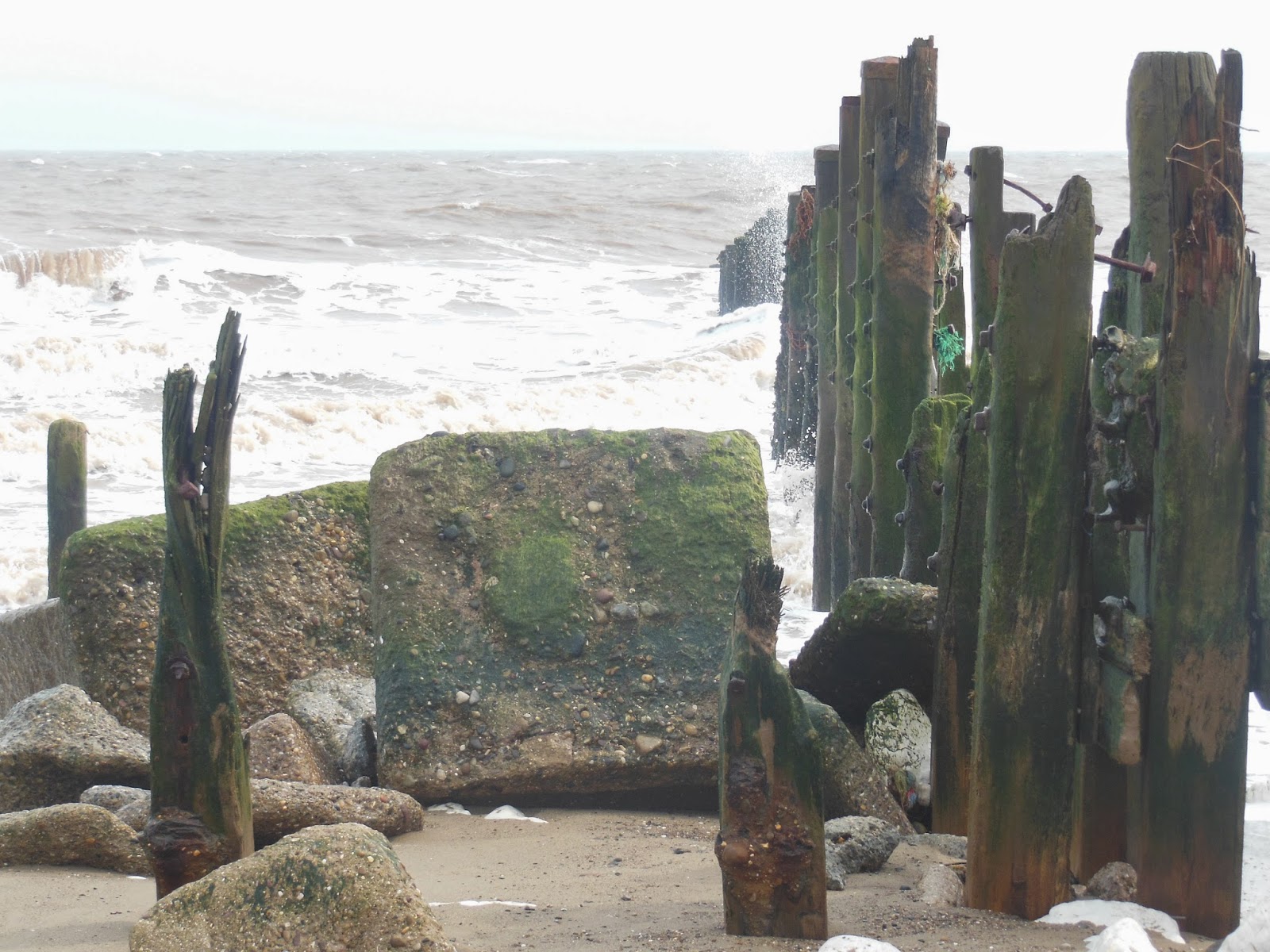 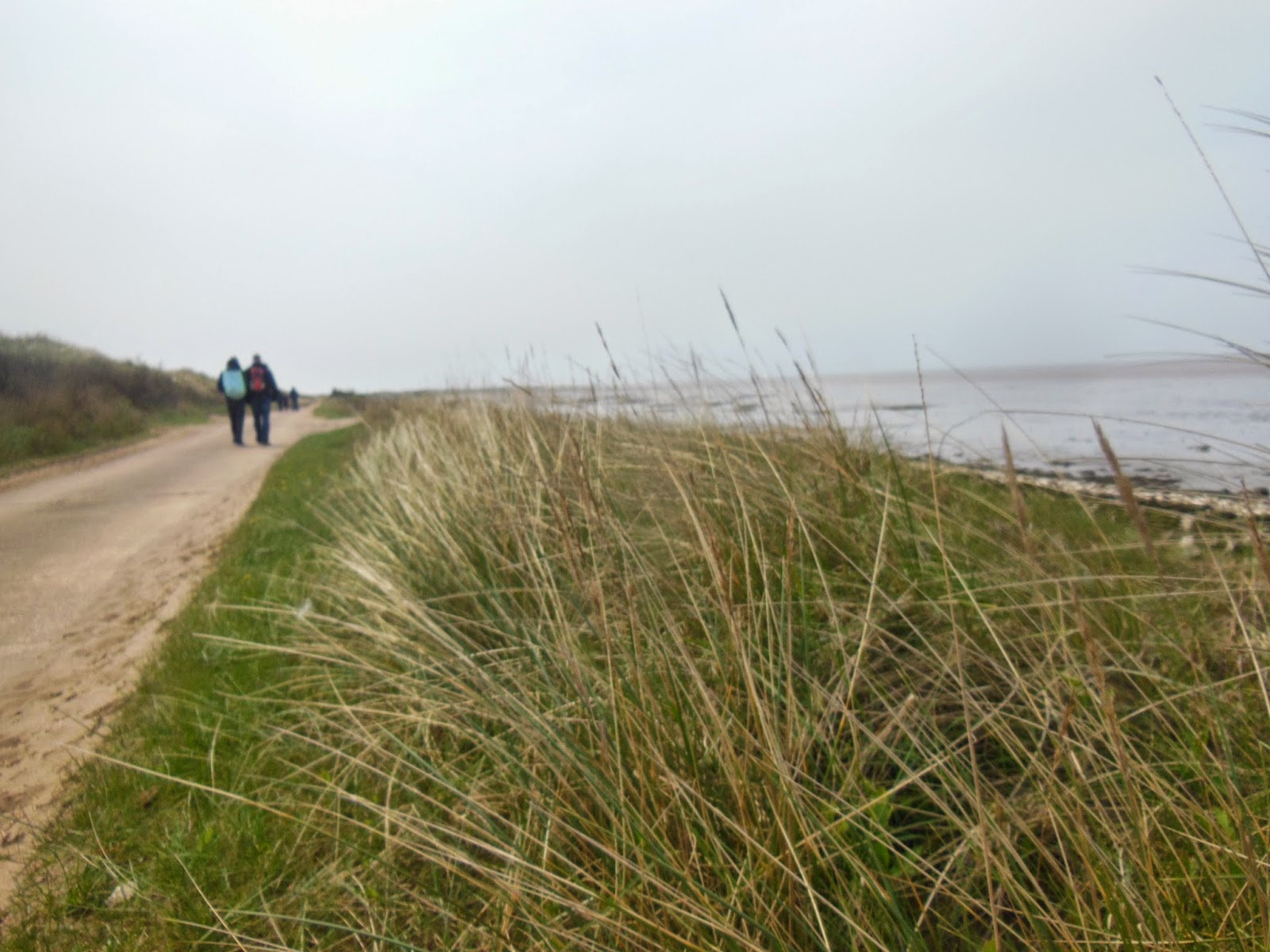 I've never been to Spurn Point when it hasn't been blowing a gale, so if ever you visit, wrap up warm!!  The walk to the end is hard going in some places where the road has gone, but there really is so much to look at.  We didn't quite make it to the end this time (as I was worried the cafe would be shut if we left it too late!!) 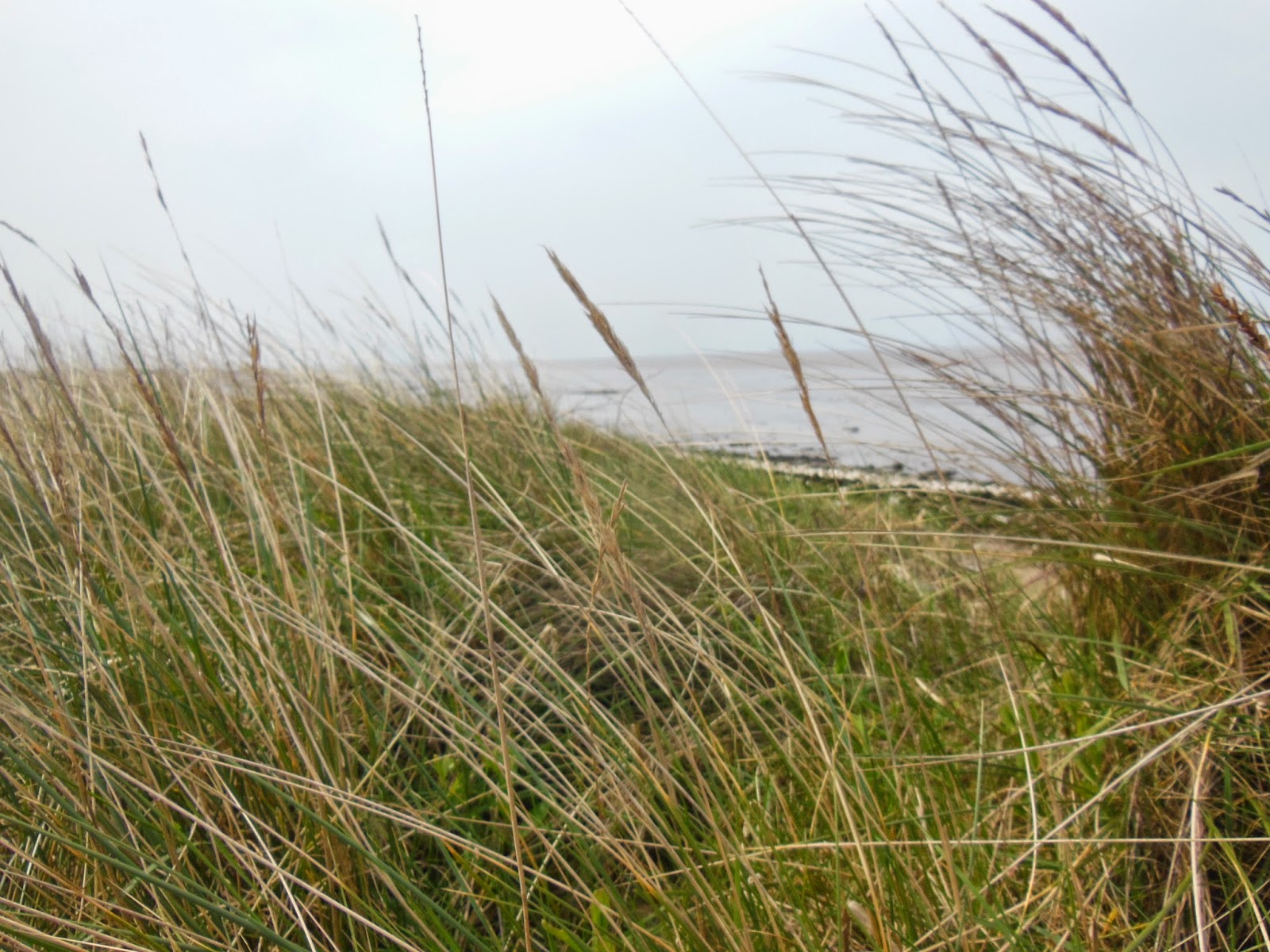 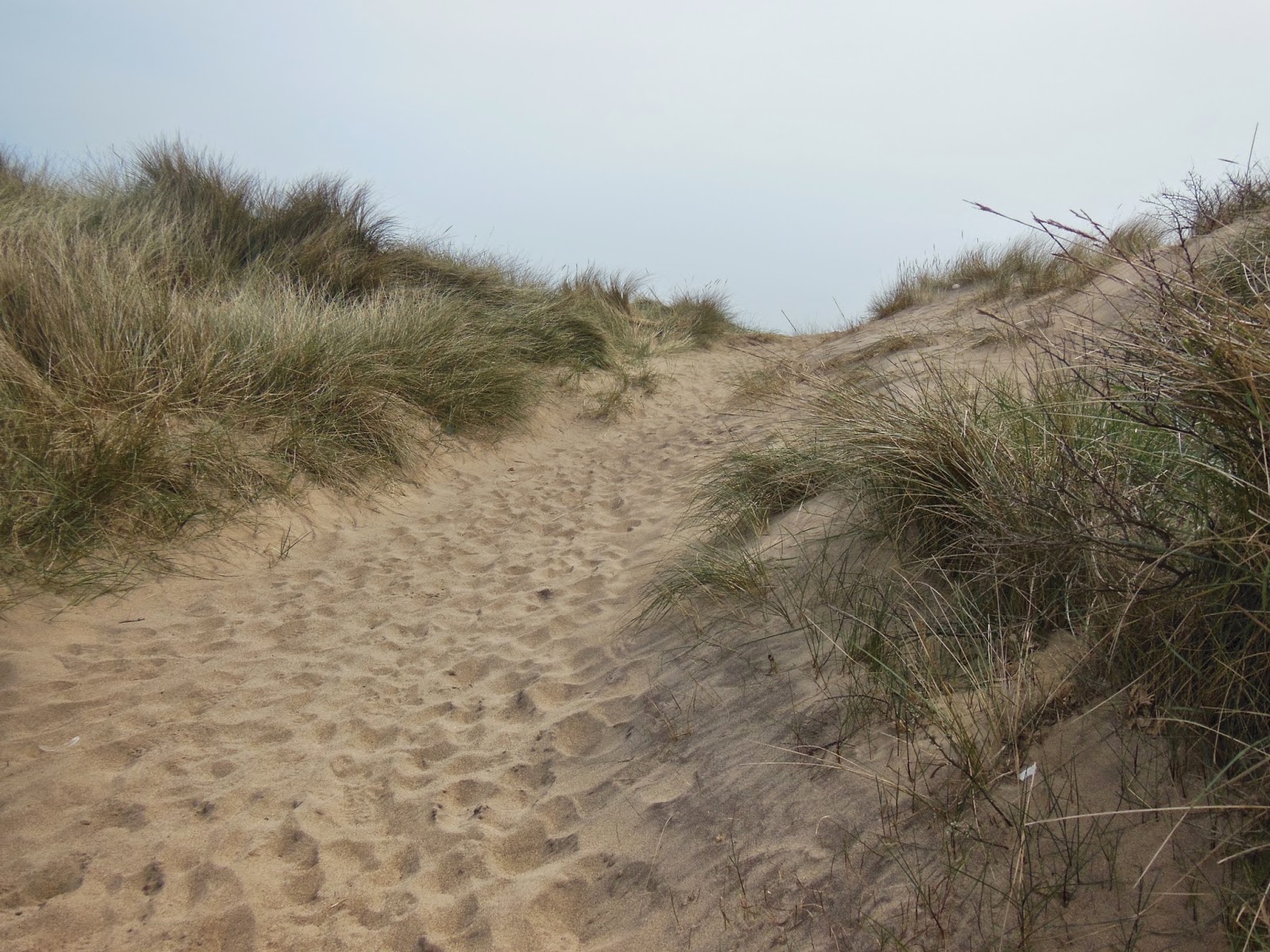 They have had a recent invasion of Brown Tail Moths on the point.  Whilst there are still a fair few of these "tents" on the tree's, there are not as many as there were last year.  I think that they are trying to eradicate them. 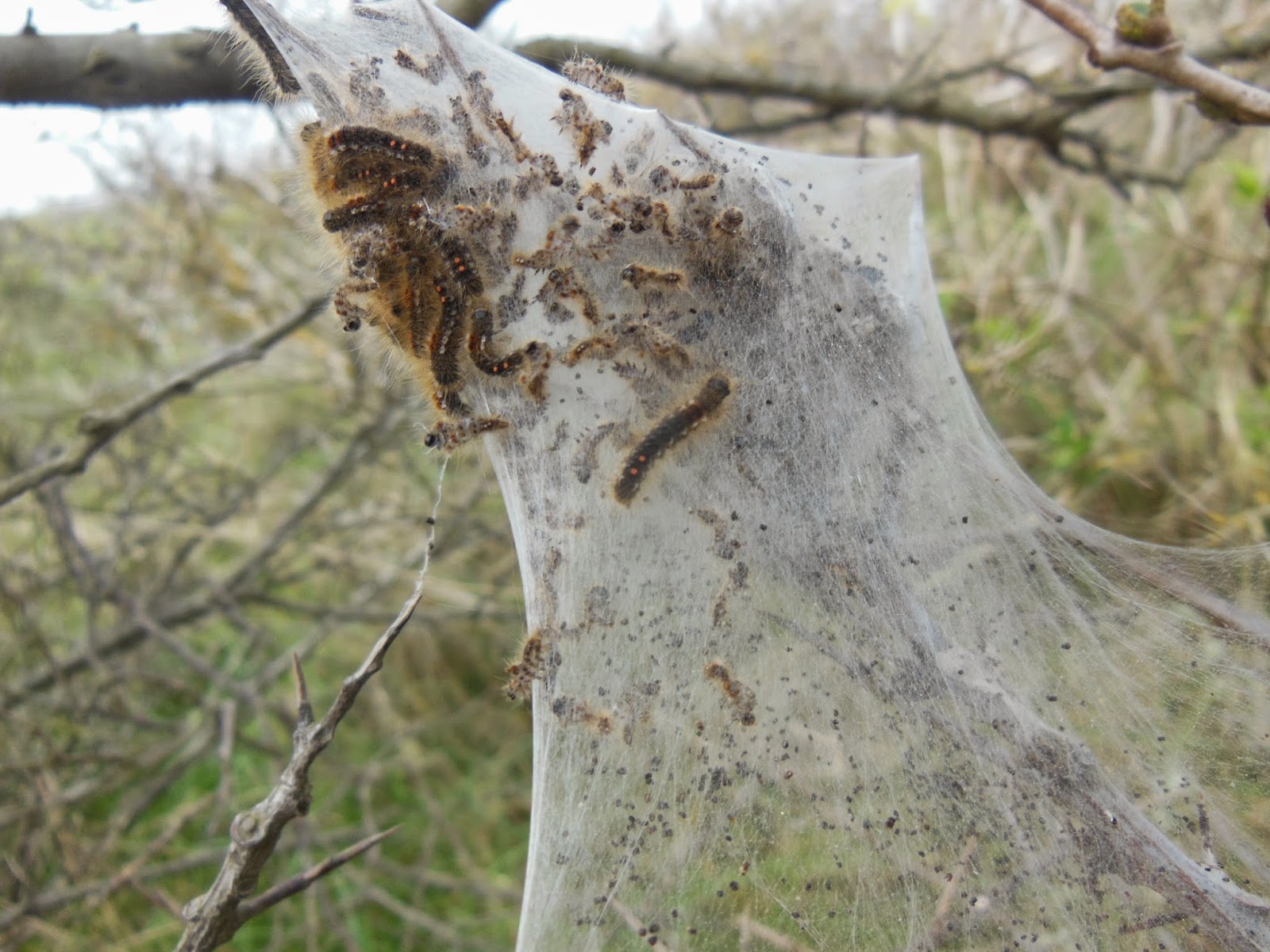 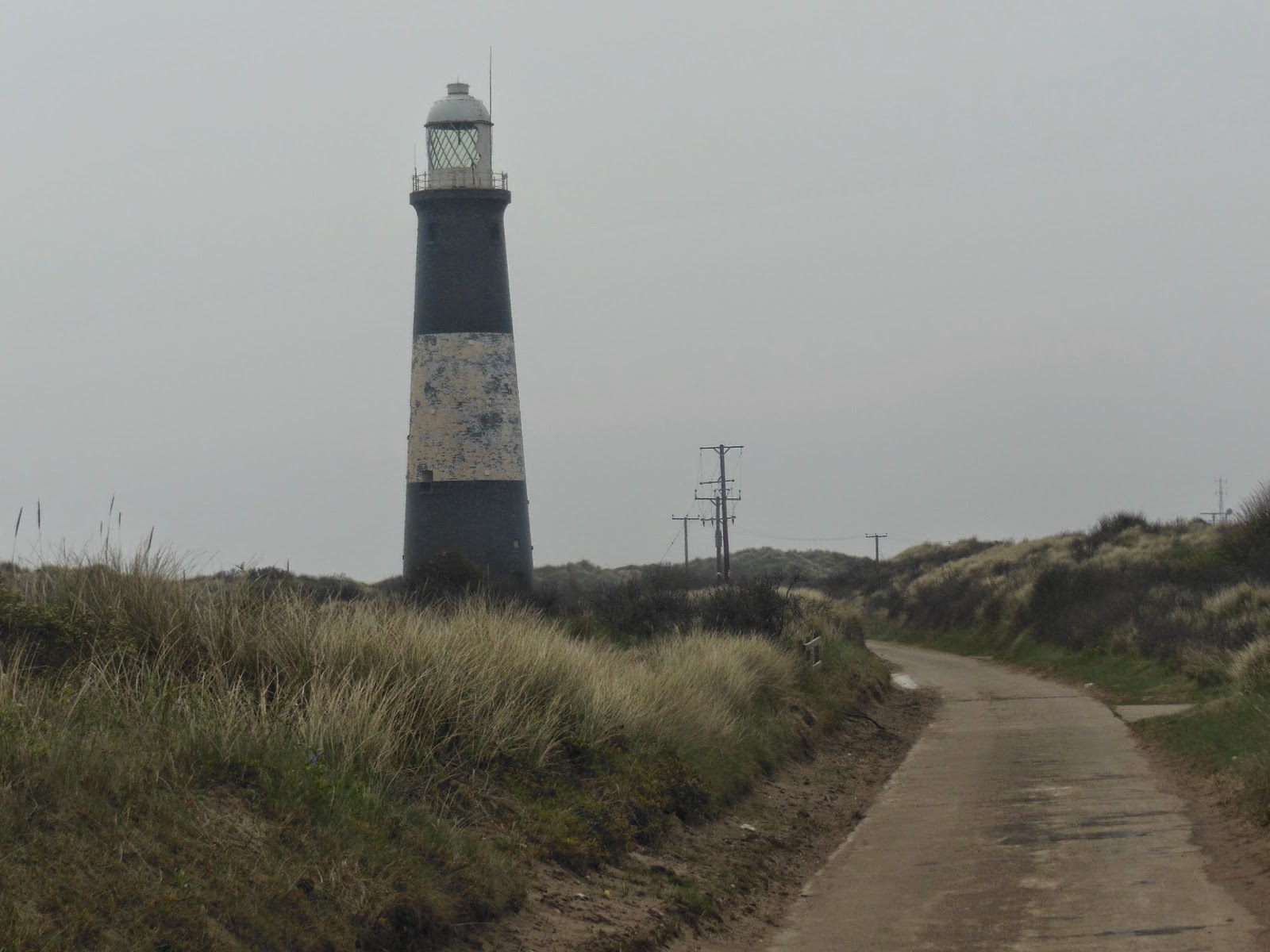 I love the place.  It is weird, and wonderful and it has a truly magical feel about it. 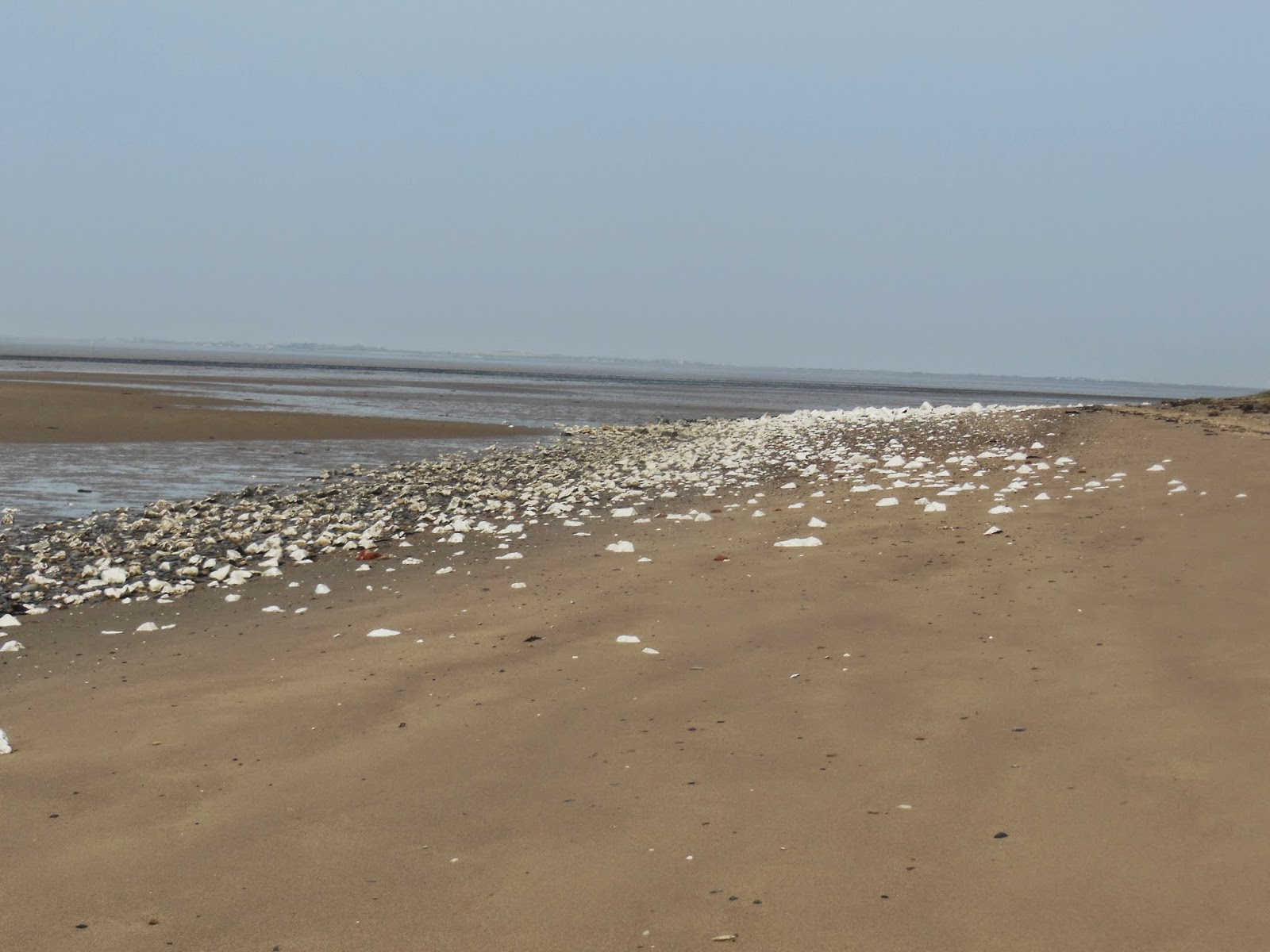 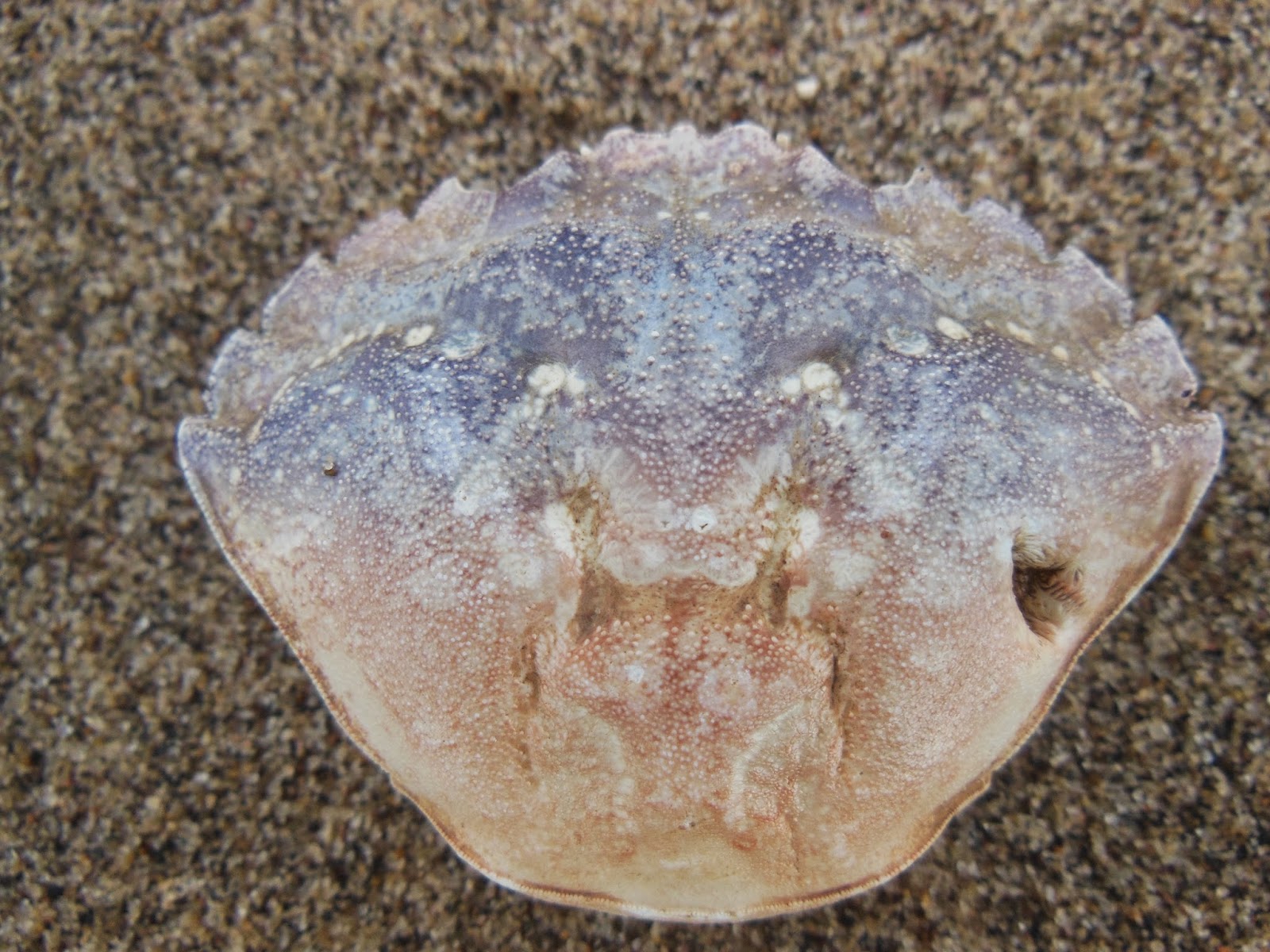 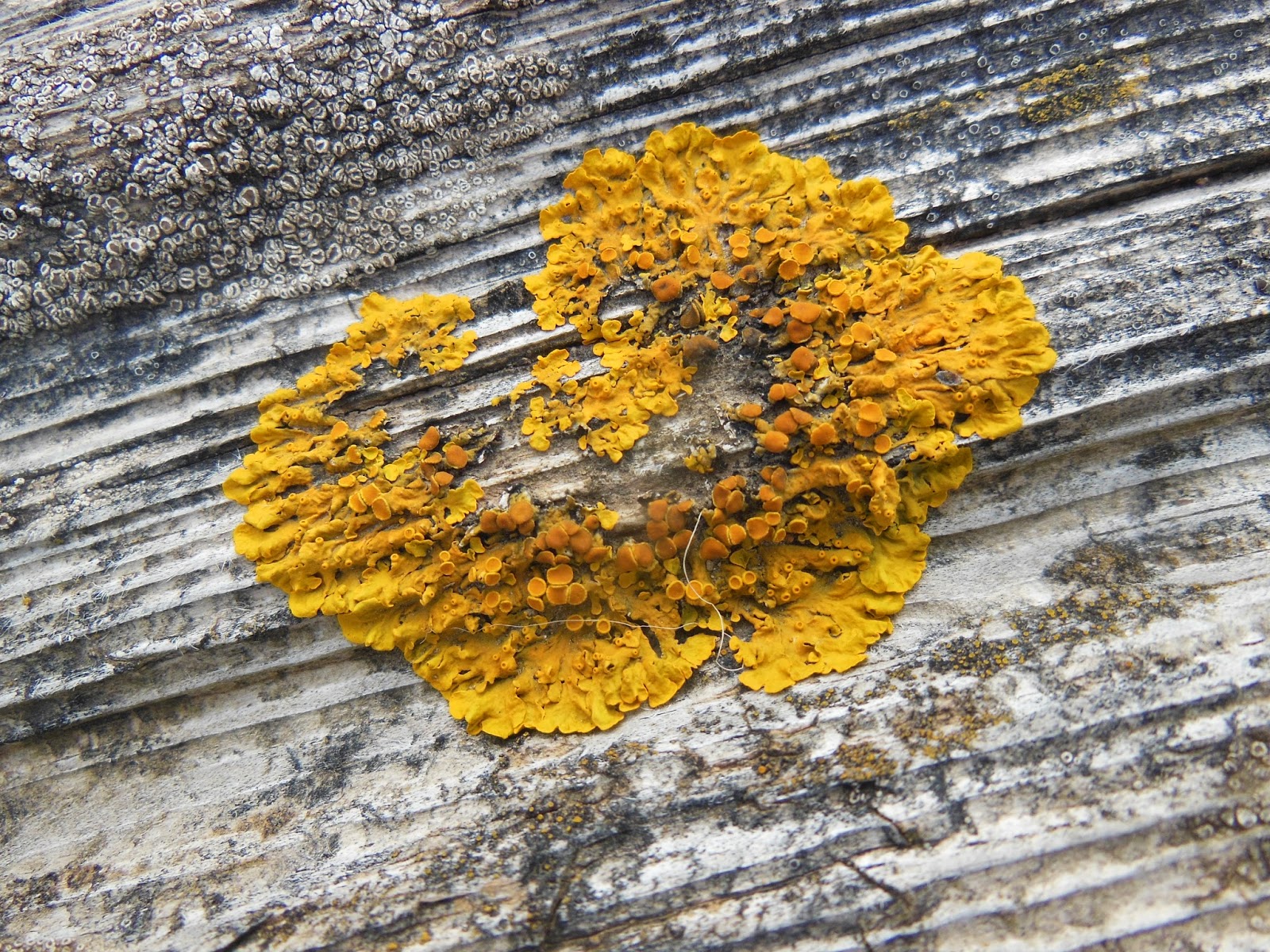 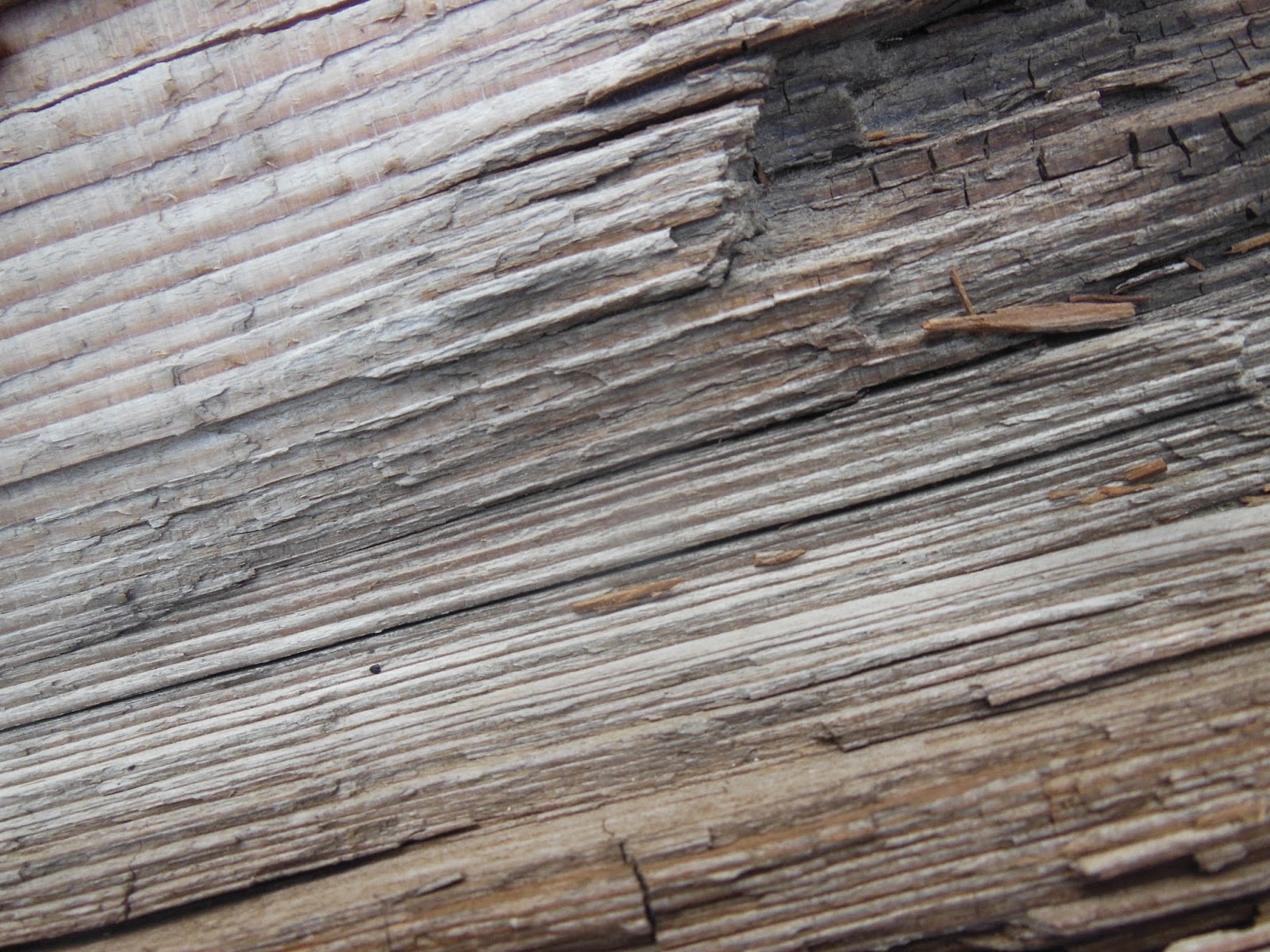 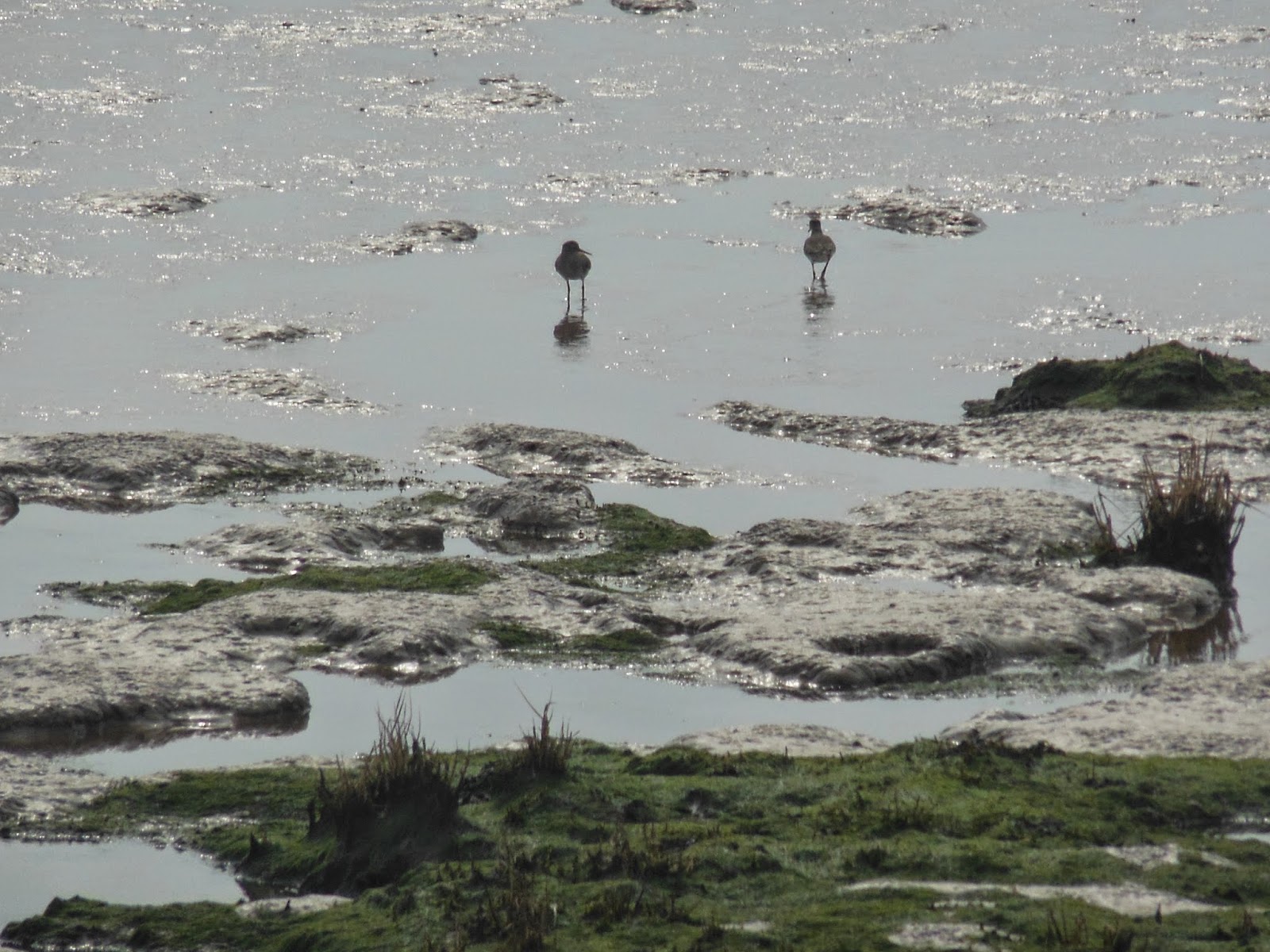 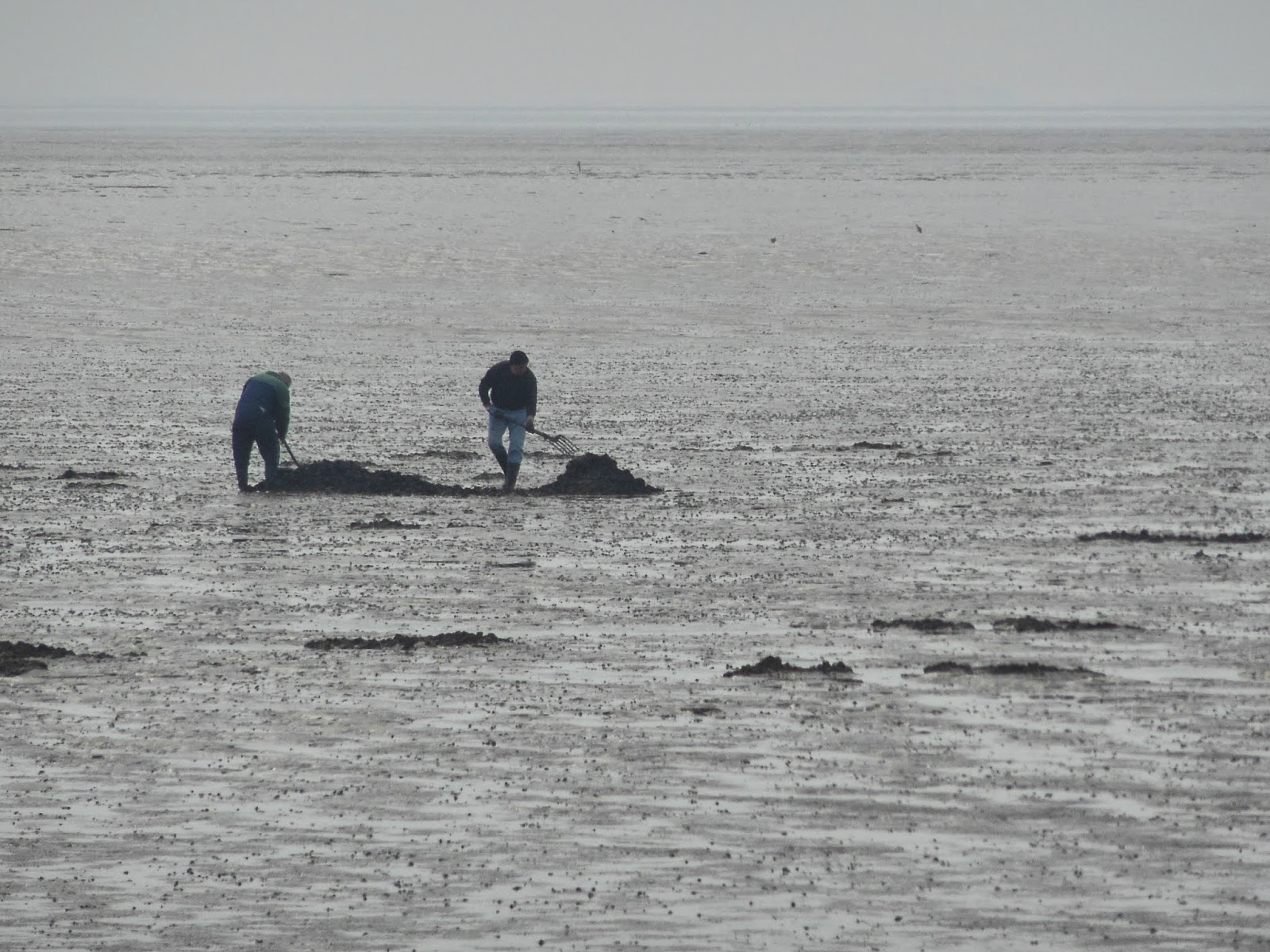 I was really interested in this fact on the notice board in the visitor centre/cafe.    The area known as Holderness on the East Yorkshire coast has only been there since the end of the last ice age and is all made up of Boulder Clay - which is why it crumbles into the sea at such an alarming rate.  Above 65 villages have been lost so far. 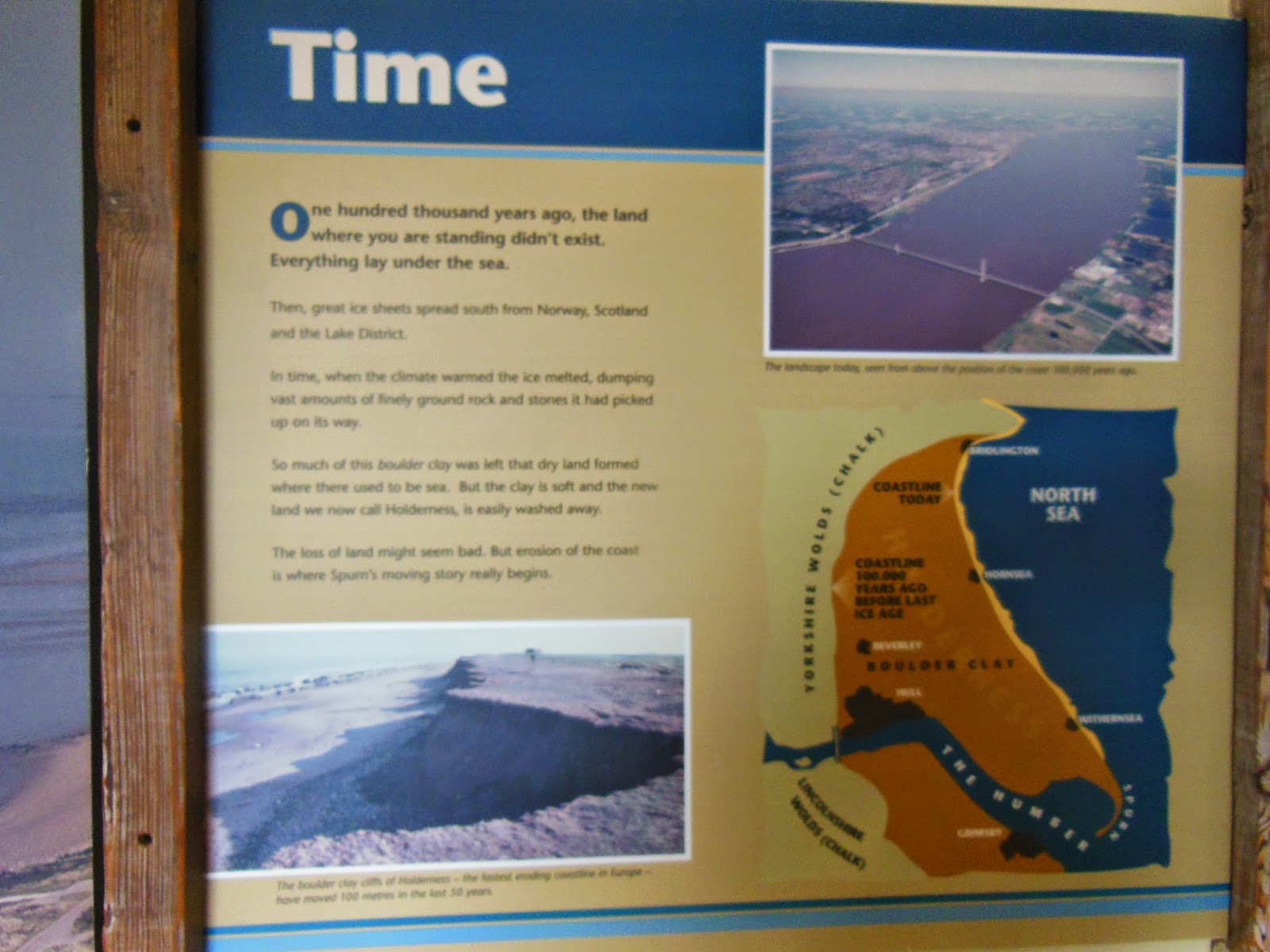 The first time we visited Godwin Battery (about 10 years ago) most of it was still buried underground at the edge of the cliffs.  Nowadays, most of it is spread across the beach. 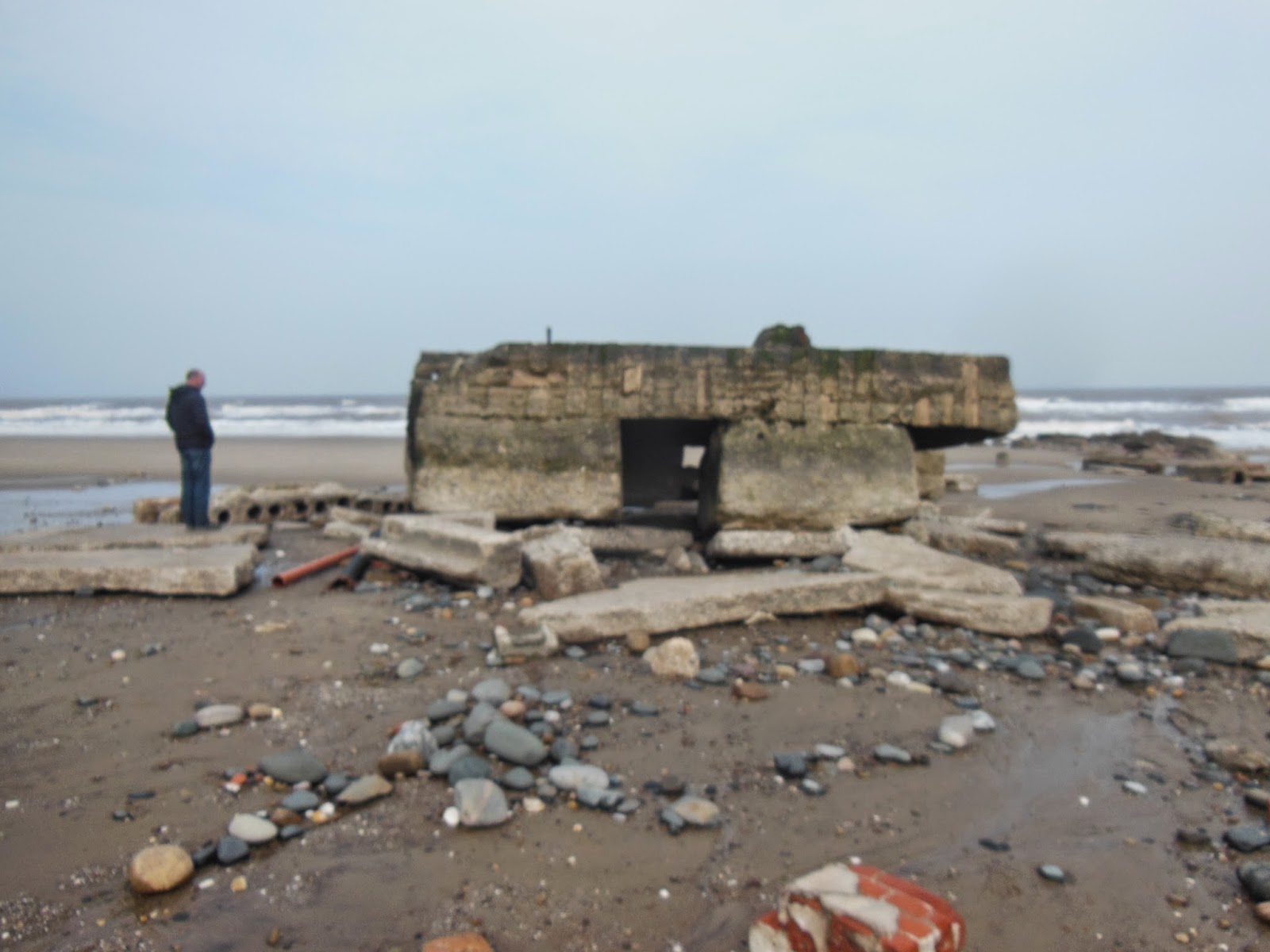 Hubby and the young man were in their element exploring the anti aircraft turrets.  The whole structure is massive and quite a sight when you see it spread out all over the beach. 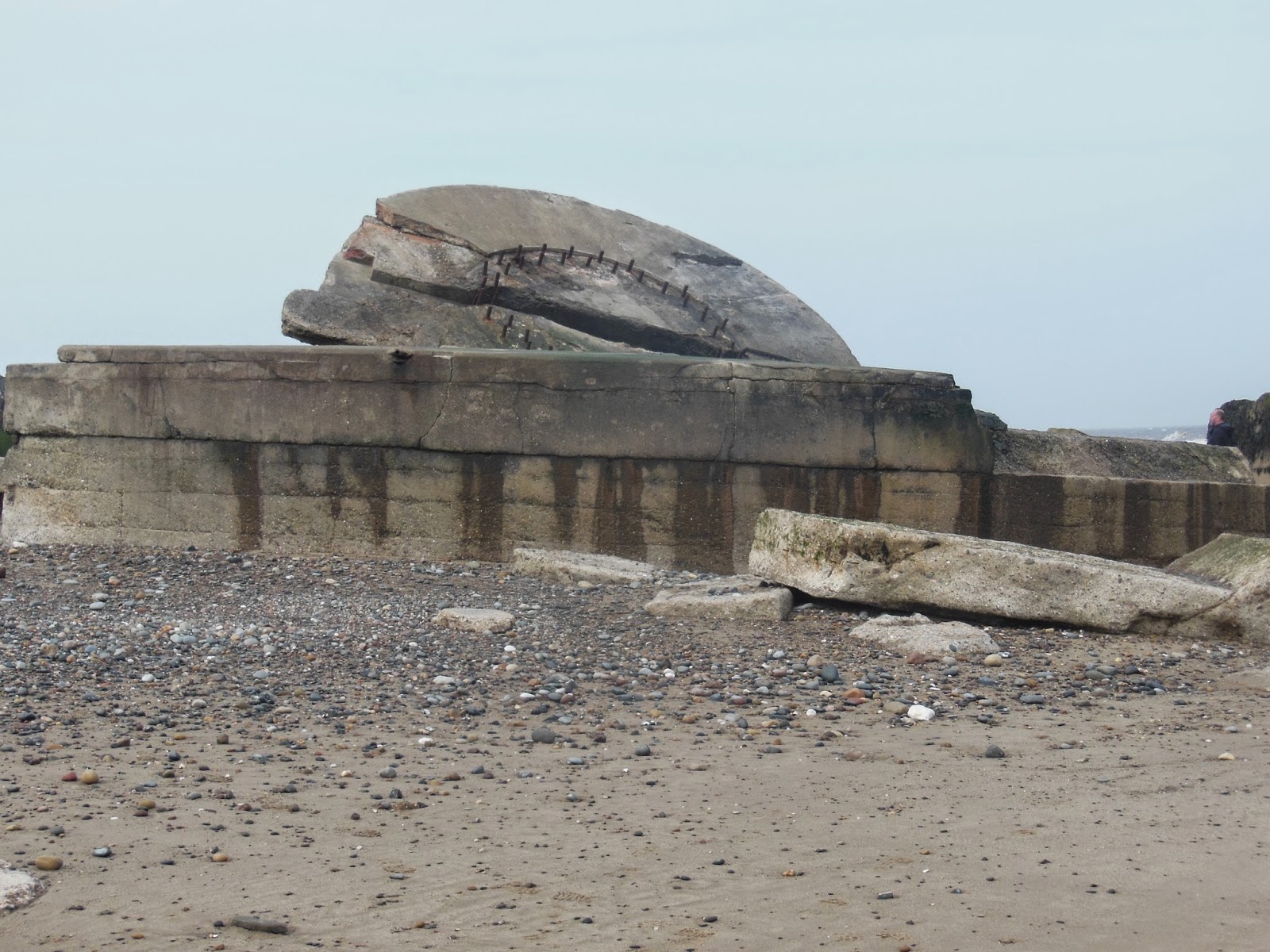 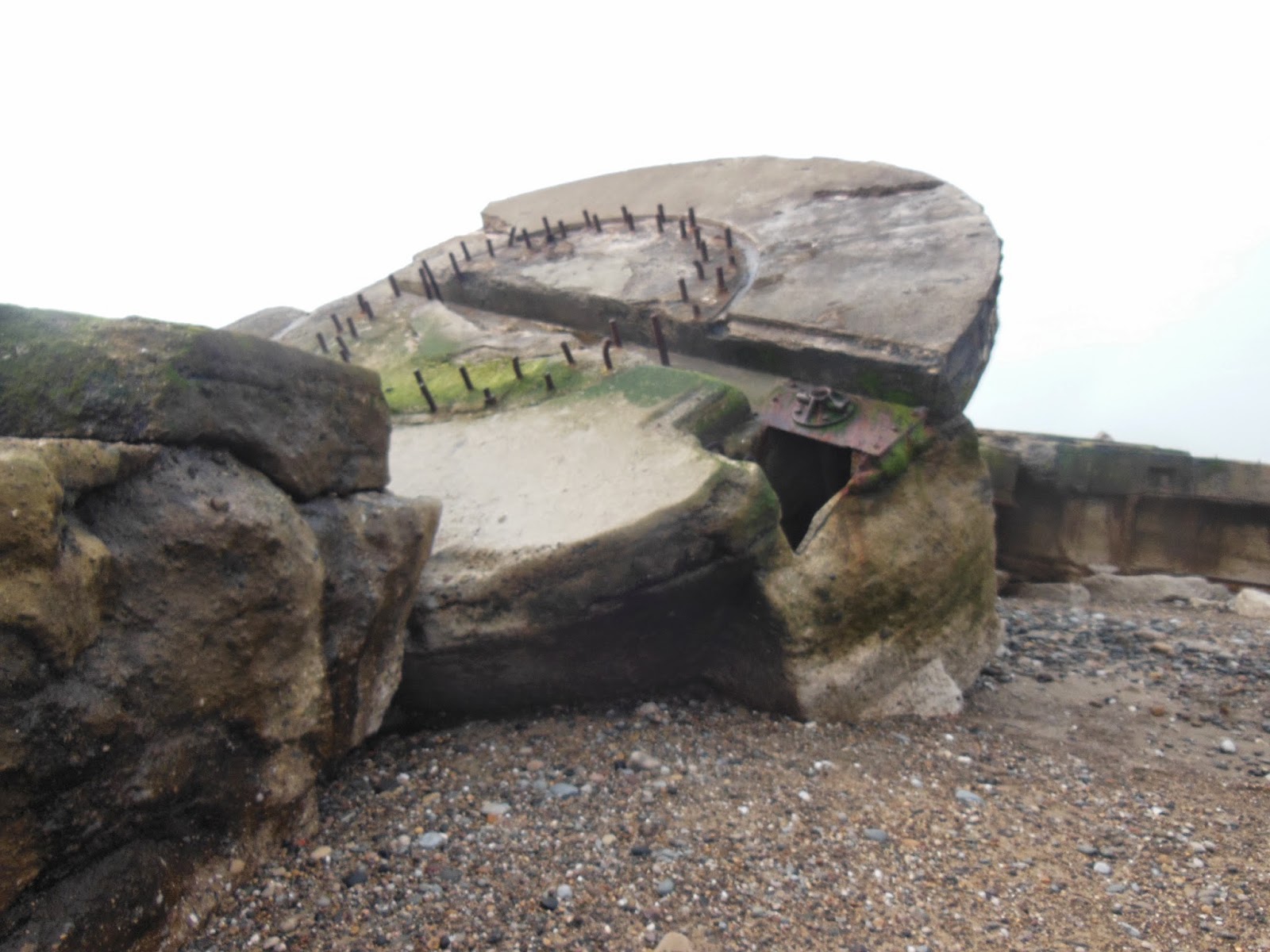 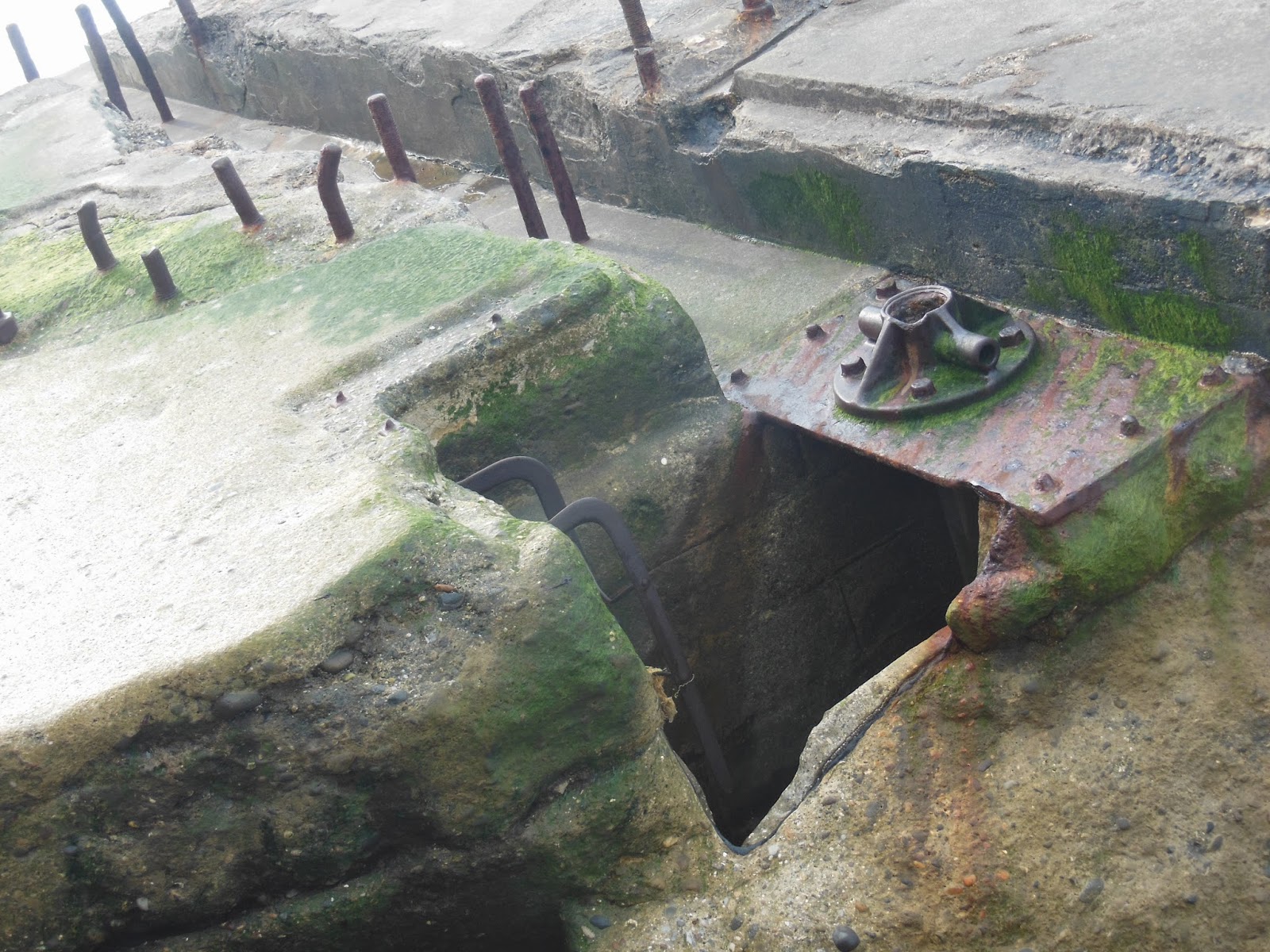 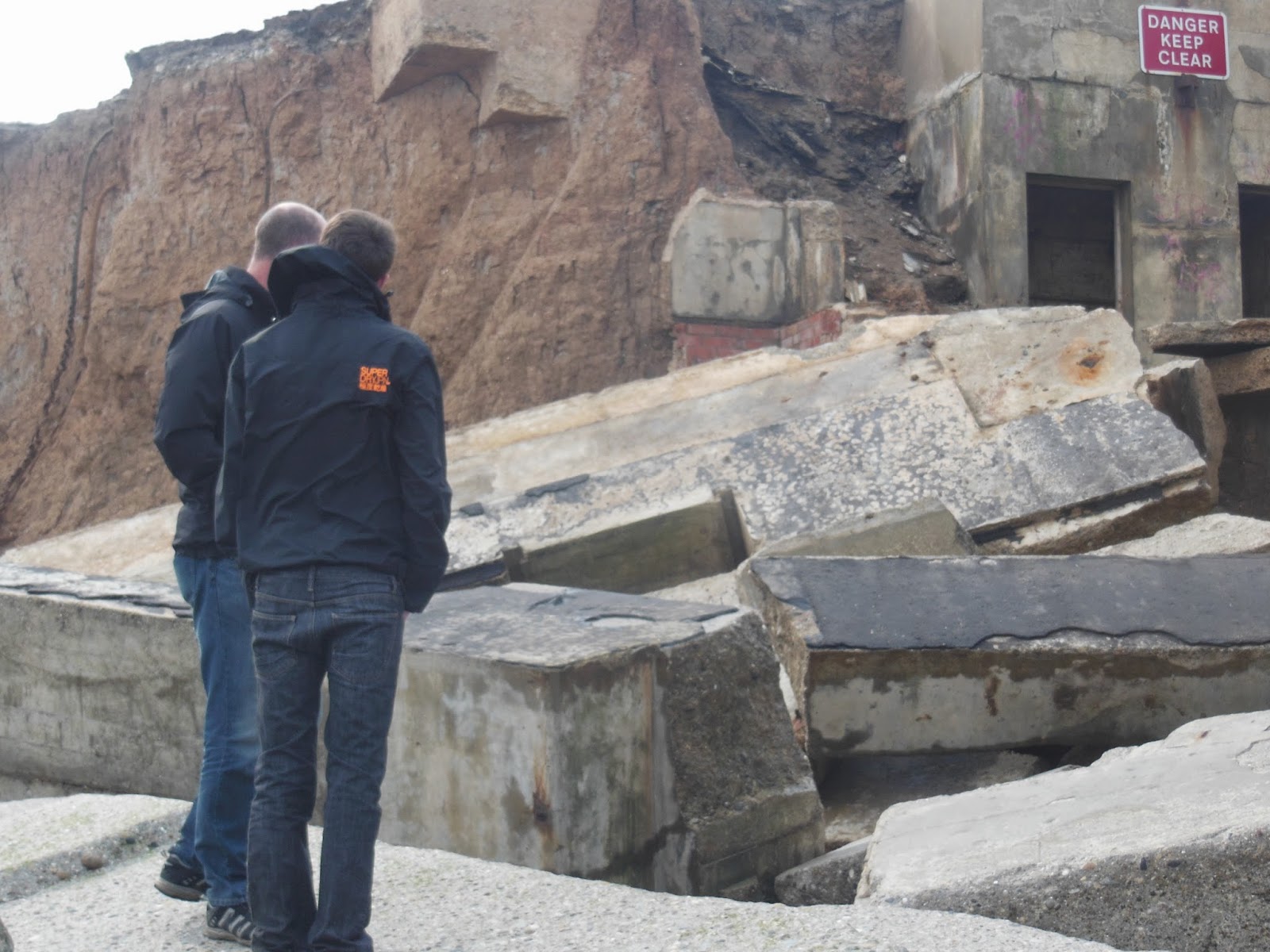 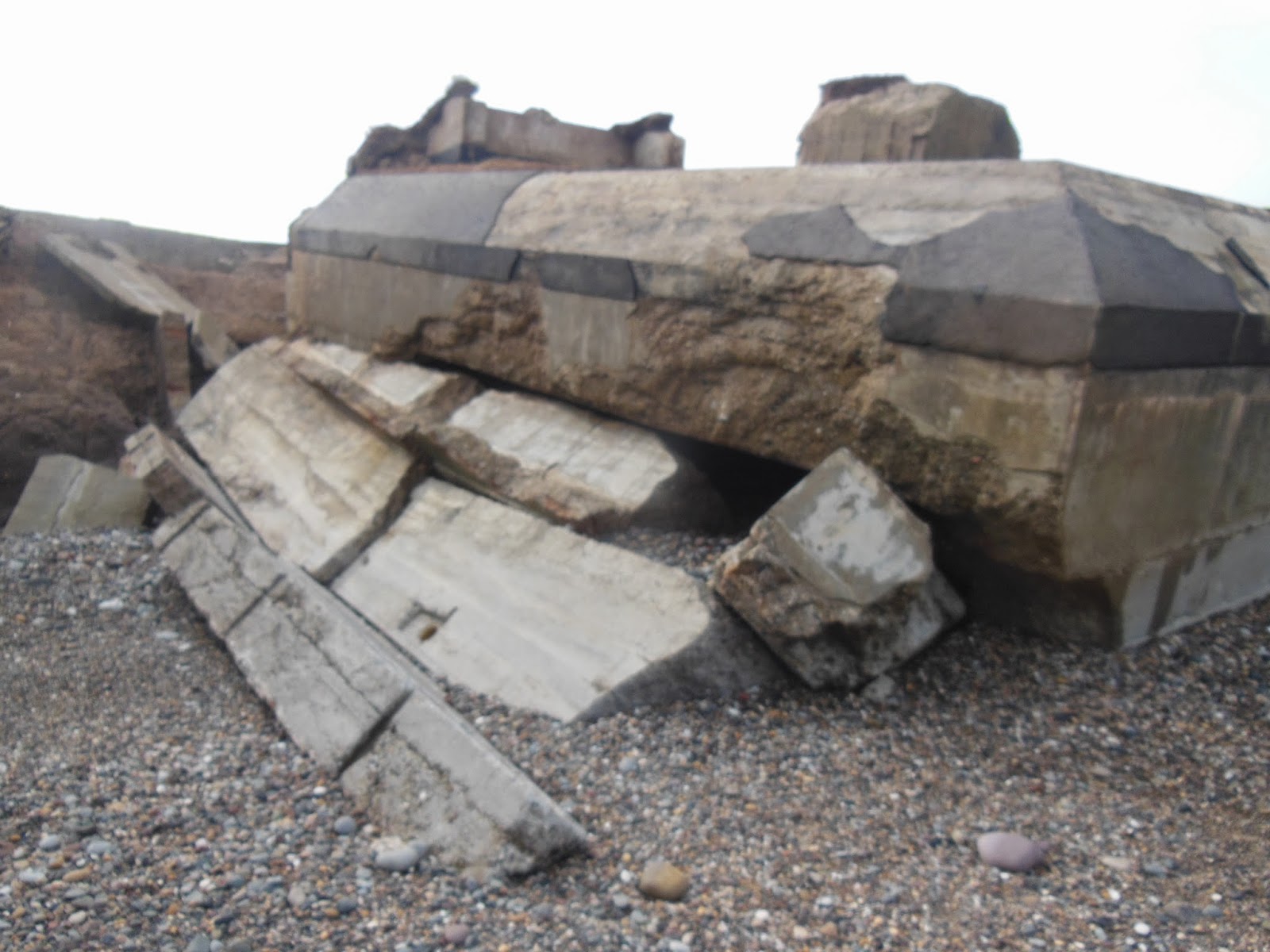 We had an amazing day out - but Spurn Point always leaves me wanting to explore more.
Posted by Diane at Wednesday, April 23, 2014

I can imagine there is plenty more to explore there. It does look wild and almost unloved. How sad that the houses are no longer habitable.

There are some great photos here, it's very interesting that 65 villages have been lost to the sea - that's a lot more than I'd have thought. I've never been to Spurn Point, it looks rather beautiful in a stark sort of way. Don't fancy the wind though!

It looks a rather unique and atmospheric place - a place I'd like to visit one day. You have taken some wonderful photos:)

Love your photos. Any place with a lighthouse is worth a visit, I have quite a thing about them. My husband would have been all over the WWII stuff.

So that's why the coast there is so brittle... I suppose it's sedimentary and not igneous or metamorphic?
Thanks for showing the photos. I want to go to the sea soon!!!

Love your photos, as usual! I didn't know there was so much old rubbish from the WWII defences. I've been to Gibraltar Point in Lincs, similar sort of place, moving slowly, like all these sandy points/spits do. Its interesting looking at old maps and seeing how they used to be. Your photos really capture the feeling of the place. Thanks, Diane!

My husband can't resist a WW2 bunker either! It's clear that last winters storms have really battered the area. I loved the some of your photos that really captured the light and space. Jx

I think that could be called a bracing walk Diane! Love the photos and all the interesting information as usual. Thanks for sharing. X

Hello there, just catching up. Such beautiful views in your previous post and such interesting sights in this one! You really do go on some interesting walks, thanks for taking us along! Hope that you are having a good weekend. xx

Just the place to blow away those fuzzy head cobwebs!
I think this was on Countryfile earlier in the year showing the damage the weather had done and I thought of you as you had shown us this place before.
Lisa x

Lovely photos Diane - we spent many hot summers days at Spurn point when we were children, picnicking and playing in the bunkers. We will have to a drive down this summer :)

Another for my list. We don't 'do' East Yorkshire much and must try harder!
Loving all your photos Diane. xxxx