When I was little, I spent an enormous amount of time with my grandparents who only lived a couple of streets away.  They were more fun and far more interesting than my parents! And  I didn't have to pester much with my Mama's before she gave in!  Their sideboard (which now has pride of place in my home)  was filled with the most fascinating items, most of which I ended up with over time - due to my pestering skills.  One of the items I loved was this very old parish magazine which I didn't realise at the time was from the middle of the first world war.  It survives in a fairly decent state, however the front page came back ripped of when I loaned it to the church to display 30 years ago. 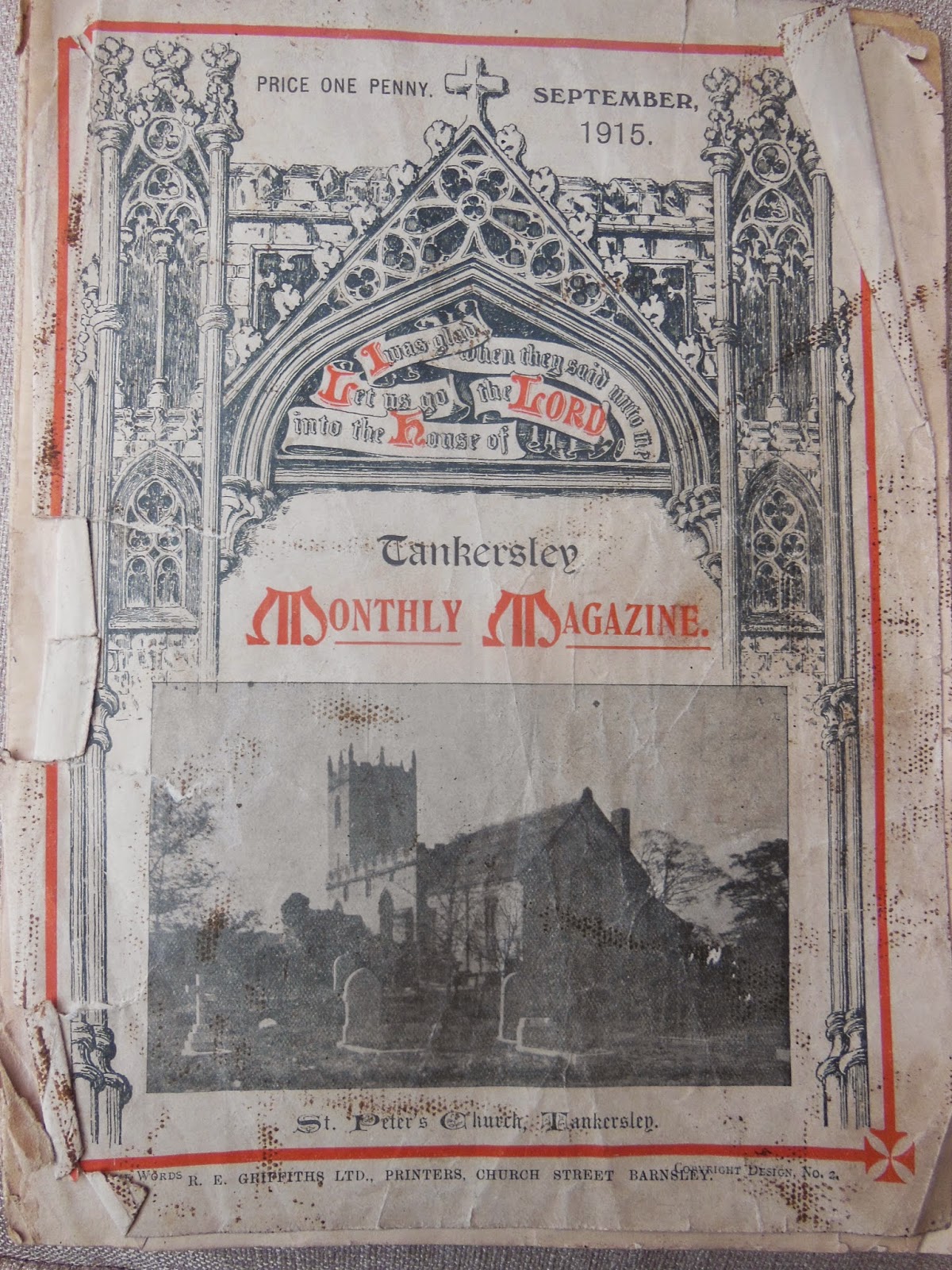 It is very different to the type of parish magazines that I see these days that are full of adverts for local business.  There isn't one advertisement in here. 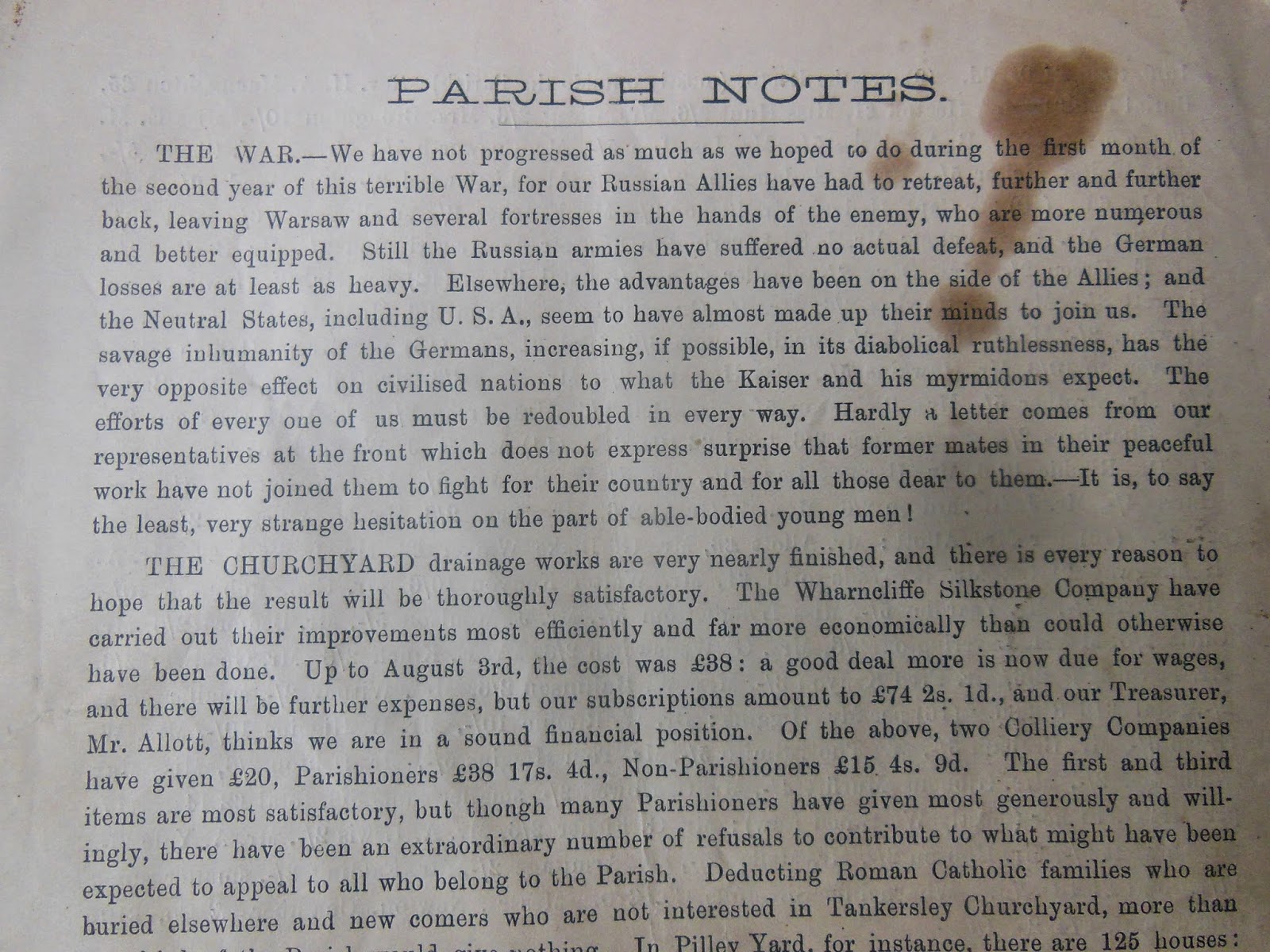 I realised that Mama's had saved this magazine as her brother is featured in the burials section.  Albert was much older than her and she spoke about him often to me.  She seemed to remember the many times he got into bother!  They were a poor mining family, and Albert once went to prison for stealing a pair of boots as he had none to go to work in. 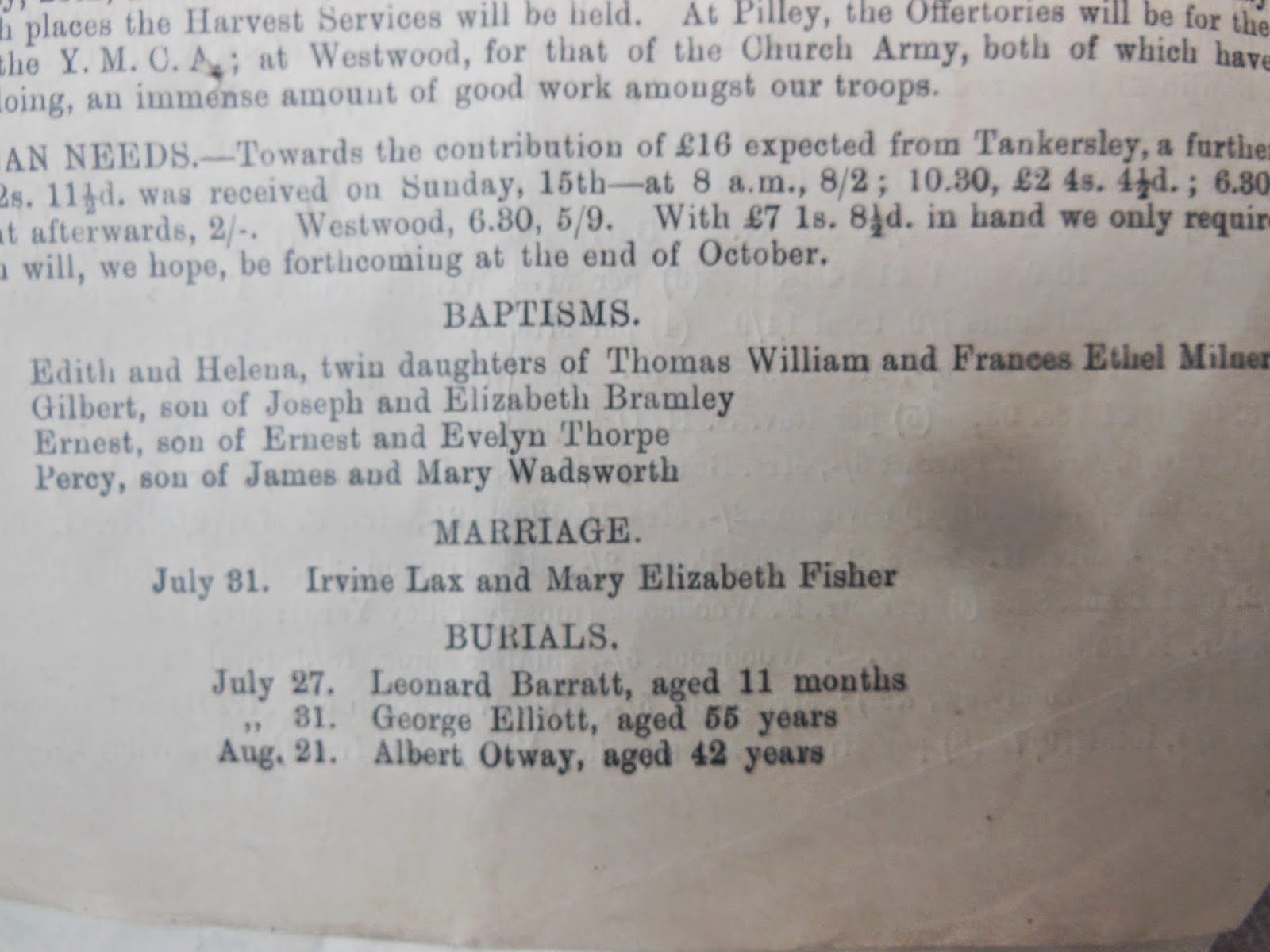 The magazine shows how every one is pulling together in the war - the boy scouts are helping to get the crops in for Autumn.  In this day and age, I don't think they would be let near that contraption - for health and safety reasons! 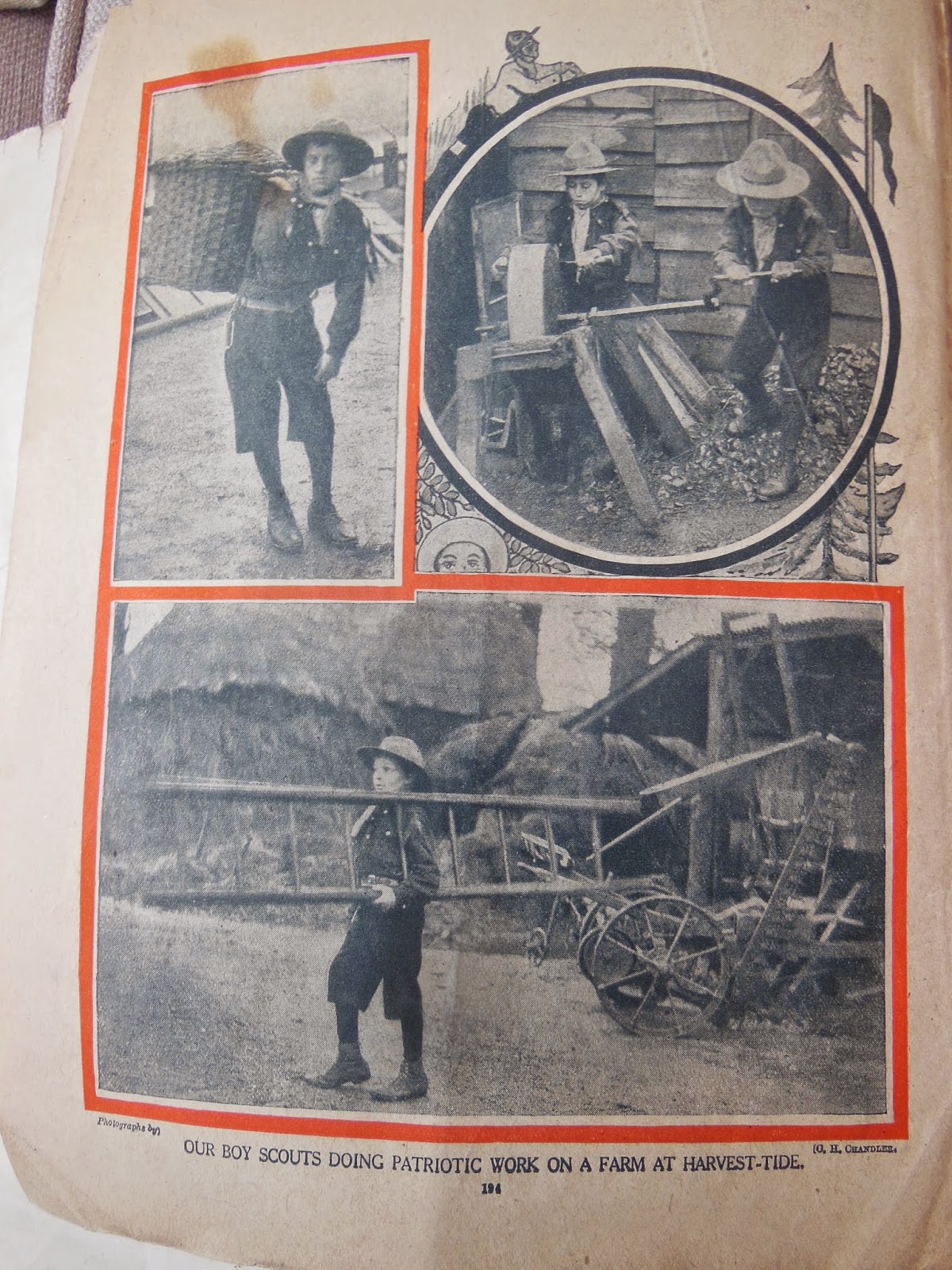 There are lots of stories in it.... 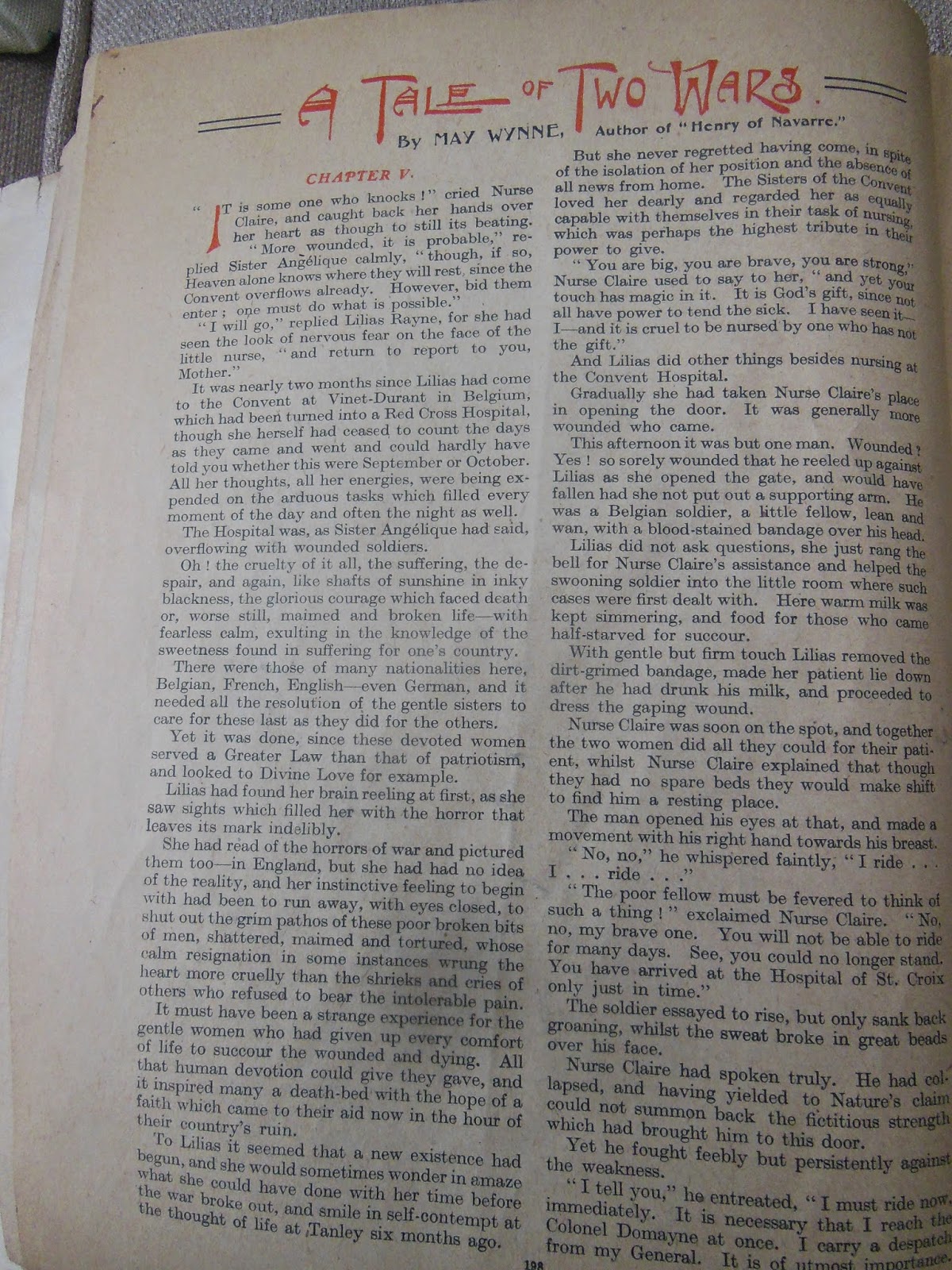 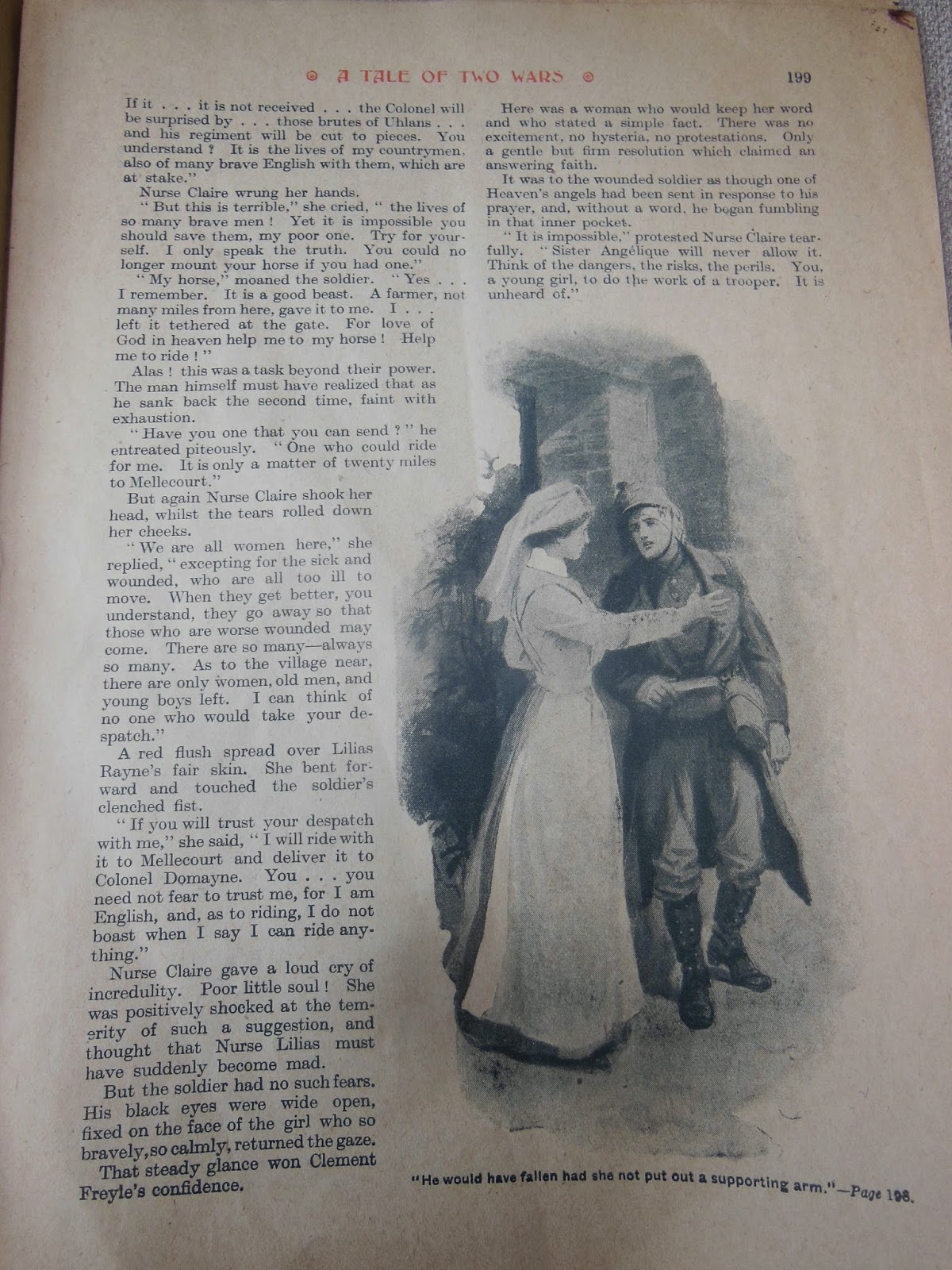 .. and a good section of how communities are springing up and building their own modern churches where there are none. 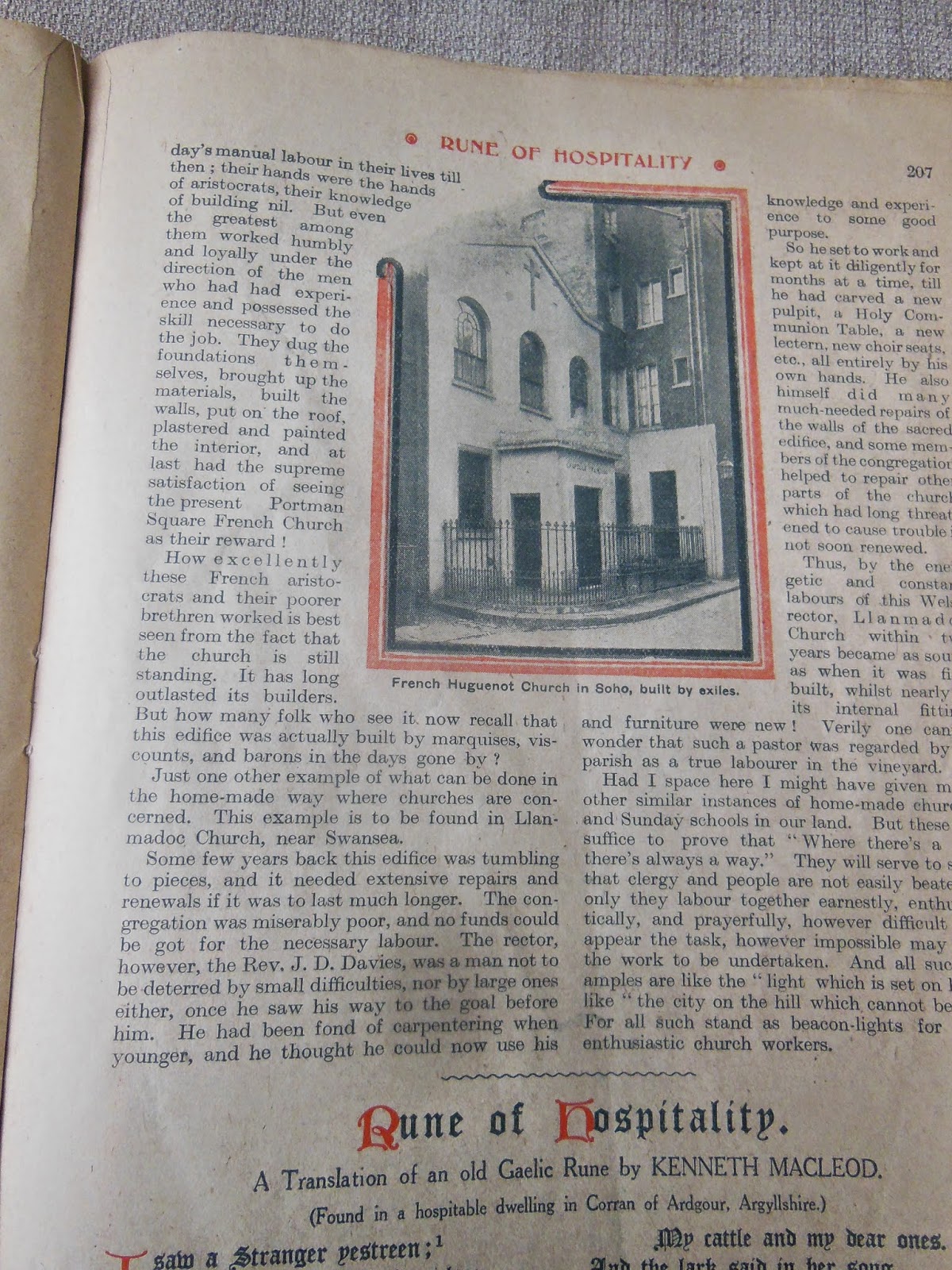 I like the section that shows how to make clothing.  I may be wrong, but I don't think food and clothing were rationed in the first world war like it was in the 2nd world war. 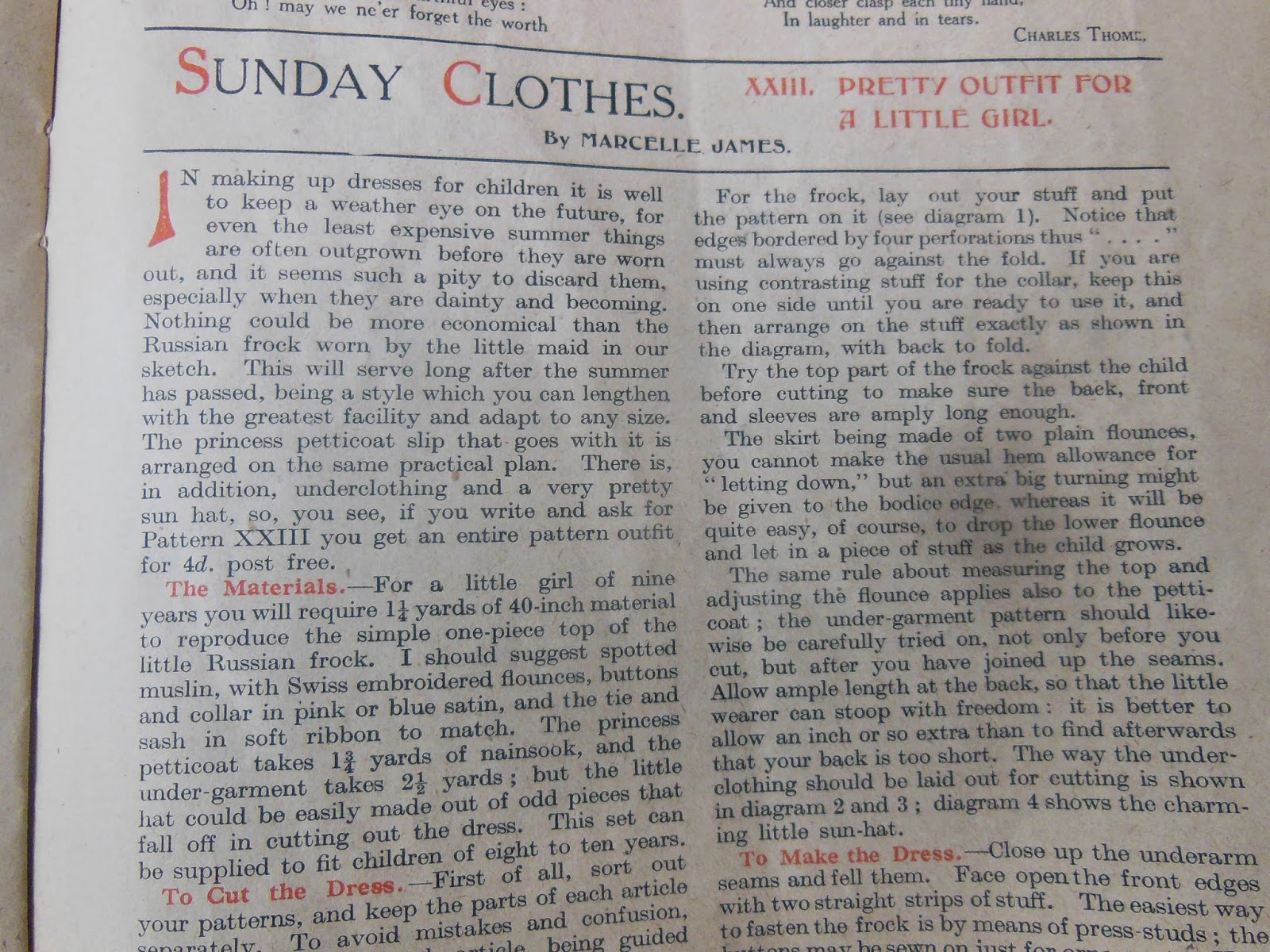 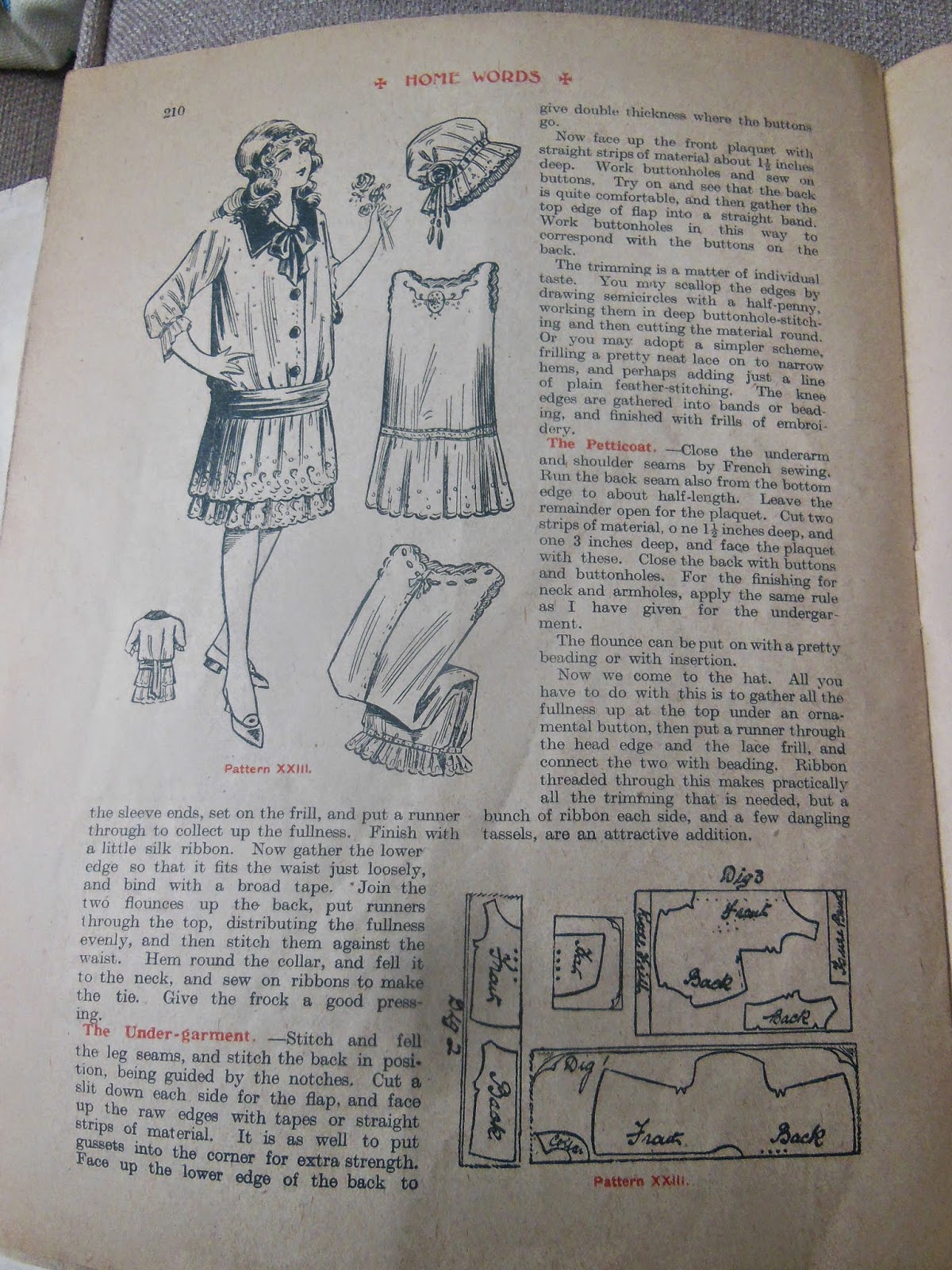 There are also stories with a moral in the tale! 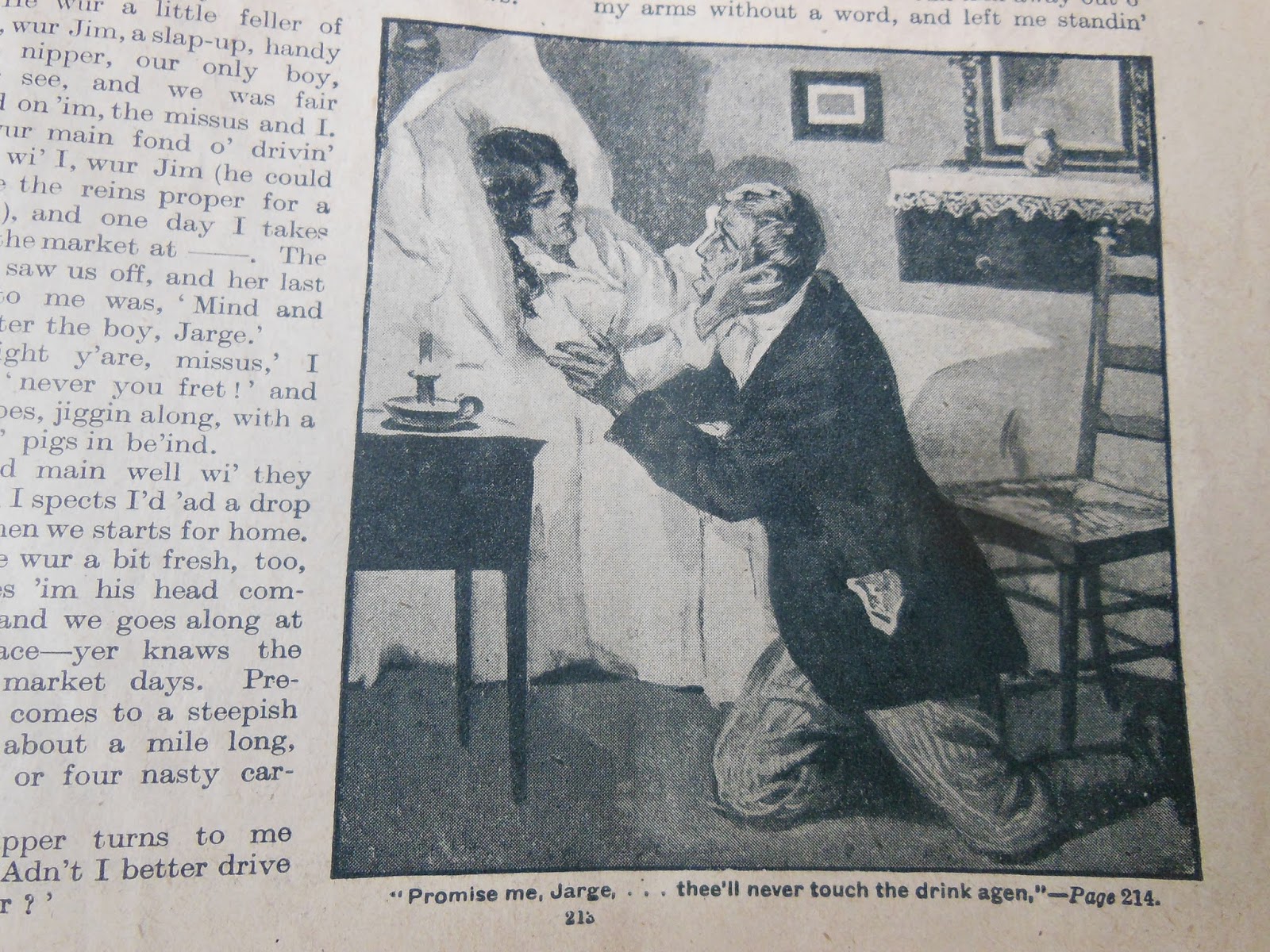 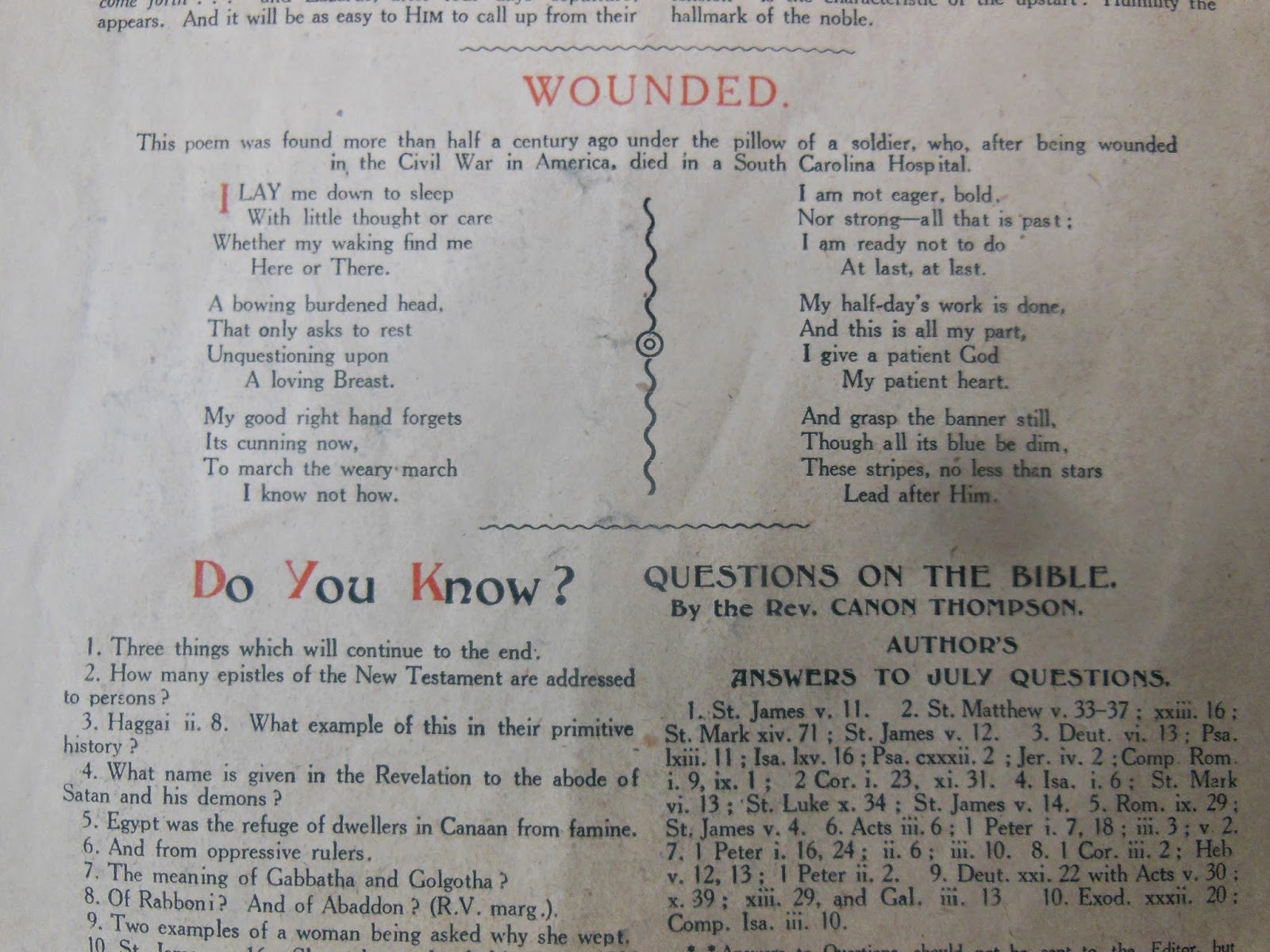 It makes a fascinating read and I'm glad I have hung on to it all these years. 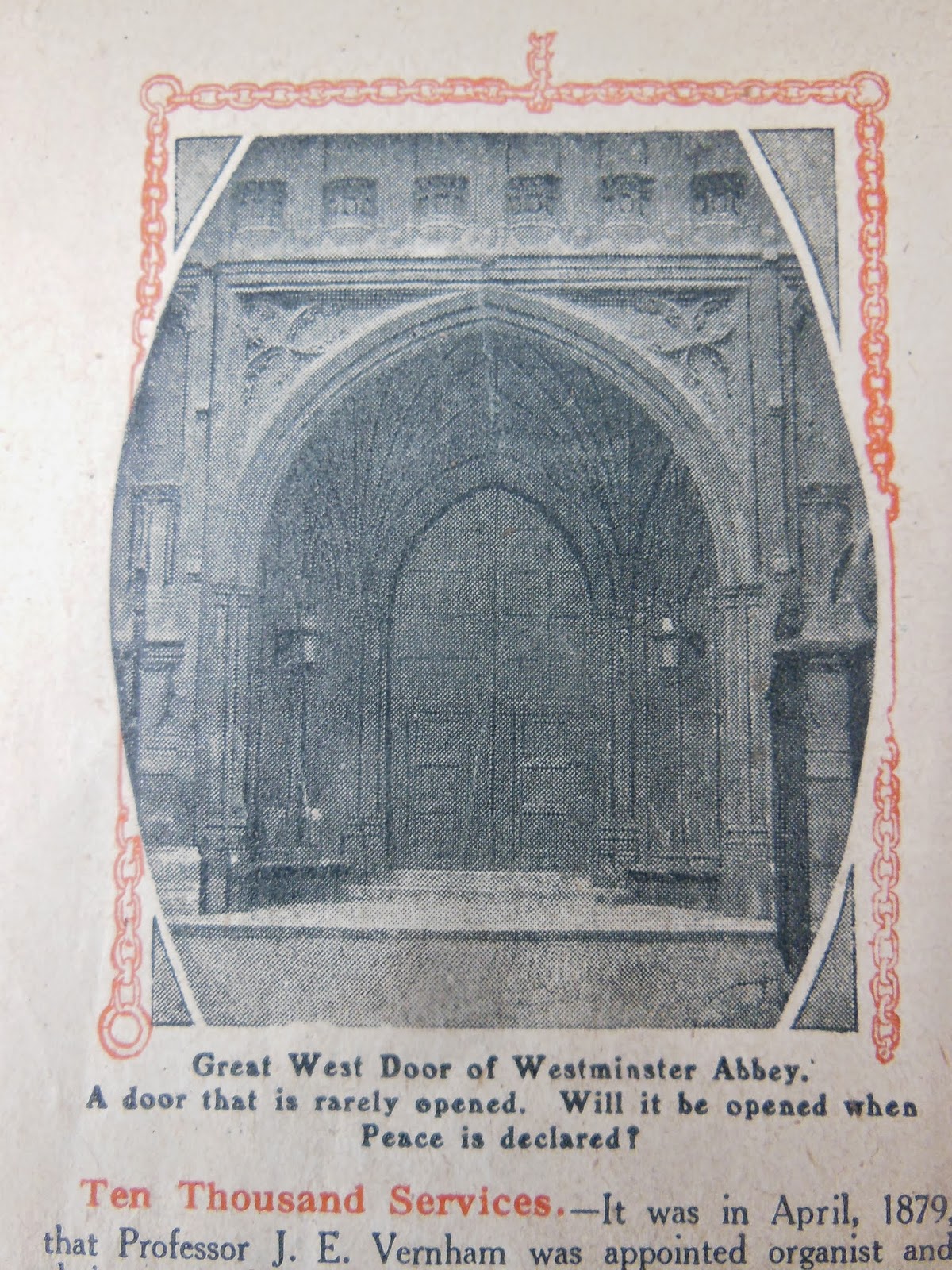 This post is dedicated to the memory of Albert Otway who I felt I knew through the stories that my Mama's told about him.
Posted by Diane at Saturday, April 12, 2014

How fascinating. I love the little Russian dress, made to last!
How sad that the magazine came back damaged when you kindly lent it out.

How wonderful to have this, I'm sure not all parish magazines were as well produced as this one!
There was food rationing during WWI, but only towards the end I think.

What a fascinating magazine! I love things like that. It must have taken ages to make that girl's dress - all those frills and flounces! I notice they charged 1d. for it (an old penny). I rather think most church magazines are distributed free now - and congregations are for ever being urged to read them, for goodness sake! (only more politely!)

Maybe our church magazines should have moral stories, tips for the home, and recipes!

What a great parish magazine so much more to read in there than the ones you see today. I love all these old 'paper ephemera' bits I have several that my Mum saved especially from the war. Poor Albert having to steal boots so he could go to work, I daresay he wouldn't have been allowed down t'pit without any:)

It is wonderful that you have this piece of history of your own family and the church. It is so sad that Albert died young, but good that his life was passed on to you through the tales that you were told about him so that he can live on with you. I find these sorts of things just fascinating and although times have moved on, some of the rural parish magazines are still not that different from this one! xx

How sad he went to prison for stealing some boots! No hand outs from the government in those days.