Get us!! Out again!! Actually I was there by default as I will explain. However hubby and I found ourselves with half an hour to spare before the event, so we had a quick drink at The Crucible Corner. It wasn't without incident though. The patio heater that we sat under actually caught fire and had to be put out by several pitchers of water. Then, a Johnny Depp lookalikie in full Jack Sparrow regalia swaggered through the square and into the bar. I would have taken his photo, but I was terrified that his sword might be real and he might be a nutcase! Any how, on to the event. 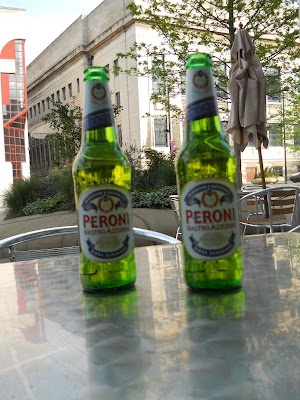 Hubby had booked a couple of tickets to hear the World Cup referee Howard Webb speak at the Millenium Galleries. He thought it might be nice for him and the young man to have a manly bonding session, but the young man had decided he would rather spend the evening with his (lovely) new girlfriend, so I ended up going.
I really enjoyed it. Howard Webb is a lovely chap with his feet still firmly on the ground. He can talk for England!! Tanya Arnold has the tiniest waist it is possible to have without snapping in two!! 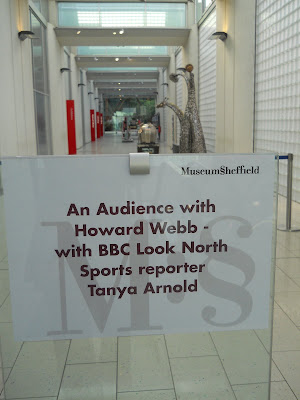 I'm still giggling over the patio heater and the Captain Jack Sparrow look-a-like! Glad you had a good evening.

Glad you had a good evening! I wasn't working last night but would have said hi if I had seen you! xx

Gosh Diane, Italian beer??? I thought you were a serious lady and had proper lager
xxxxx

Sounds like an interesting night under the heater with Johnny Depp!!
Oh to have a waist like Tanya!

Wouldn't have thought of a football referee giving a talk at the Millenium Galleries. Bet he was had some interesting tales to tell! Did you ever discover what 'Jack Sparrow'was up to?

You are a veritable gad about Diane - glad you had a good night. Are you by any chance going to Cornwall for your hols at half term - I am and I am soooooo excited. Keep meaning to do a post as I have made a new holiday handbag - whoo hoo!!!