Through Facebook, I had discovered that a chap from Elsecar Heritage Centre had organised an 8 mile stroll on Sunday talking about the Fitzwilliam family and mining in the area along the way.  As it was free, and very close to home, I thought it was worth joining to see if we could learn something about our local history.  So with a picnic lunch packed, and a beef casserole prepared in the slow cooker, we set off. 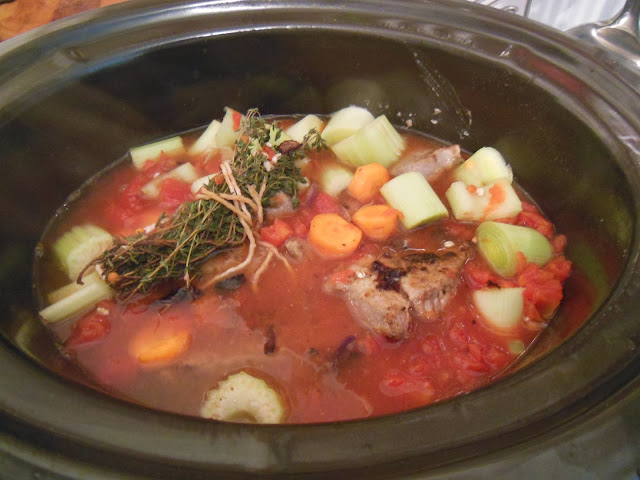 The walk was very poorly attended (which always amazes me! ) Only one other couple - Anne and Geoff had signed up for the walk, so with our guide Dave, and Nigel a student at Sheffield Uni studying mining in Elsecar, we set off.  We became firm friends along the route! 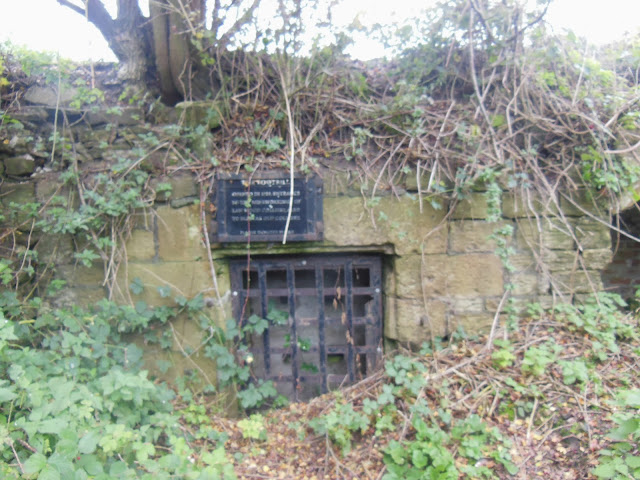 We hadn't gone more than 50 paces when we were shown a very early drift mine that we had never seen before, and we walk past this loads! 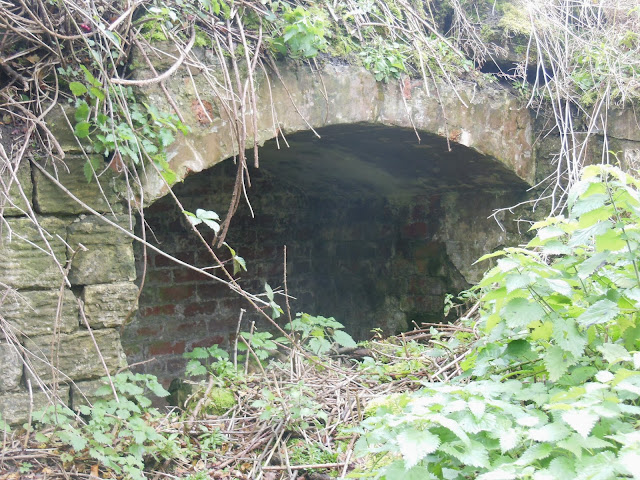 It just goes to show what is under your nose that you don't see. 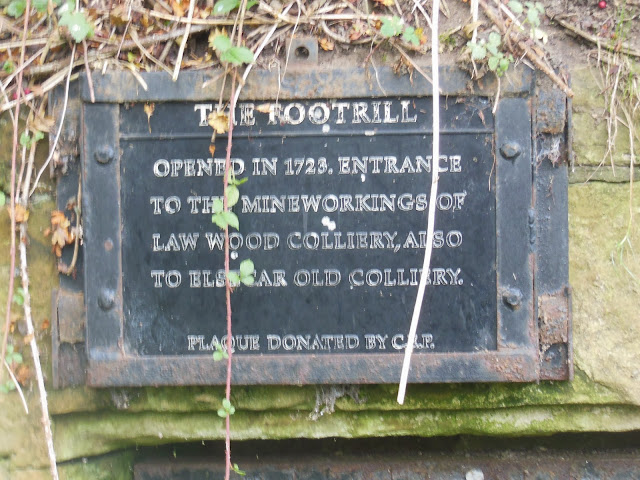 Our guide also told us about the importance of these very early ironworks and the plans to preserve them. 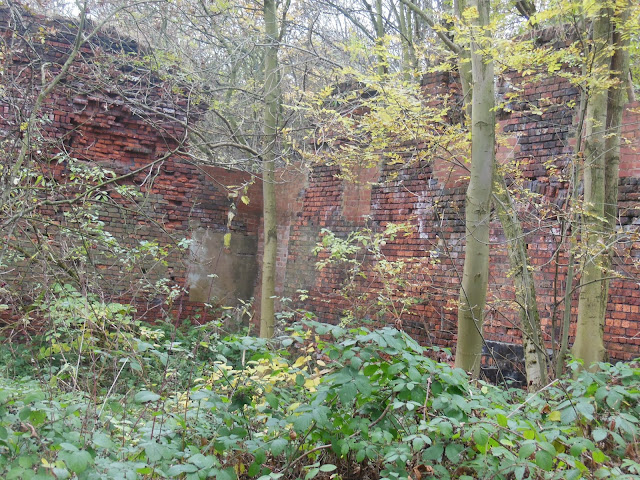 We have also walked past here many times without realising the importance of this wall of very old locally made bricks. 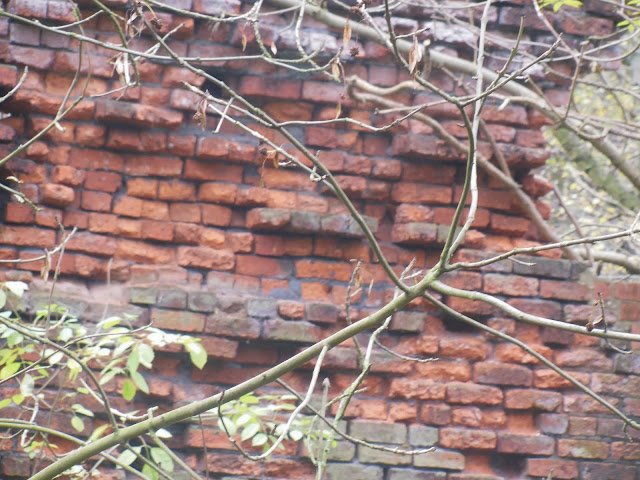 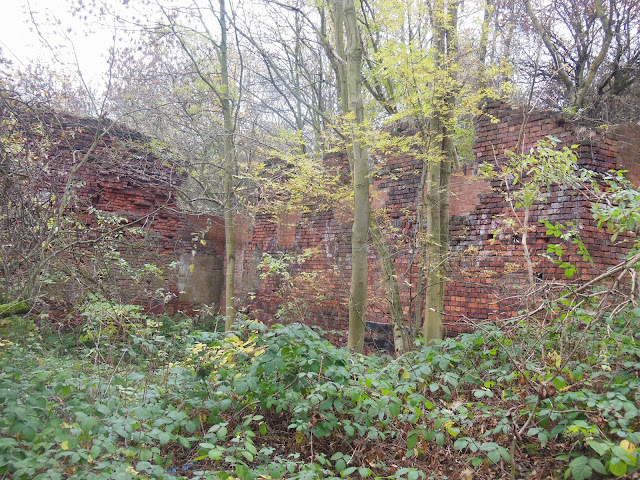 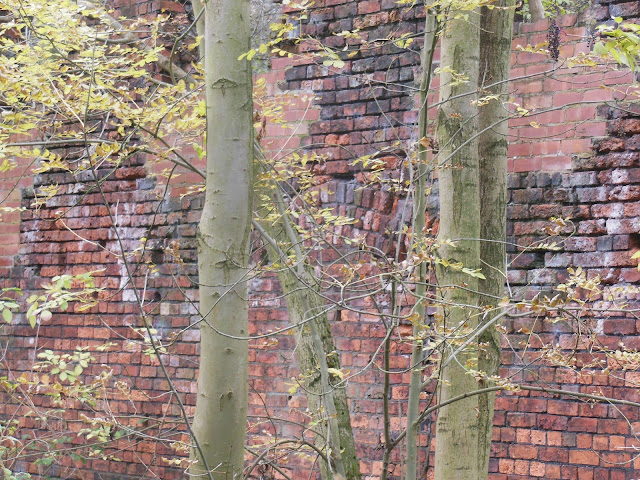 Fortunately there was only one very steep climb - and it was at the start of the walk, so that was well planned.  I craftily made them stop several times to admire the view and get them to visualise Elsecar before the colliery was built - when it consisted of only 3 farms (and catch my breath!!). 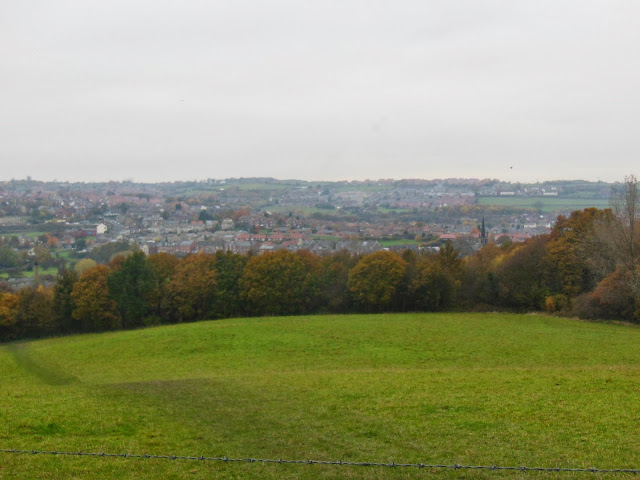 It was a very dull day, and not great for photographs, but I managed a few.  Our next stop was "The Needles Eye" - one of the Wentworth follies. 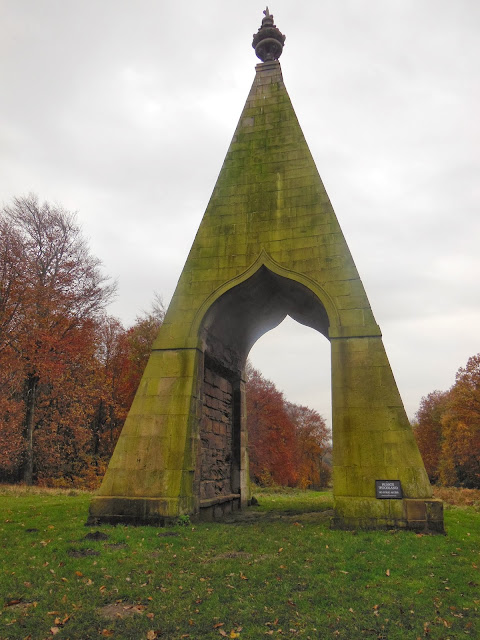 No one is sure why this was built, but local rumour has it that one of the earls made a bet that he could drive a horse and carriage through the eye of a needle. 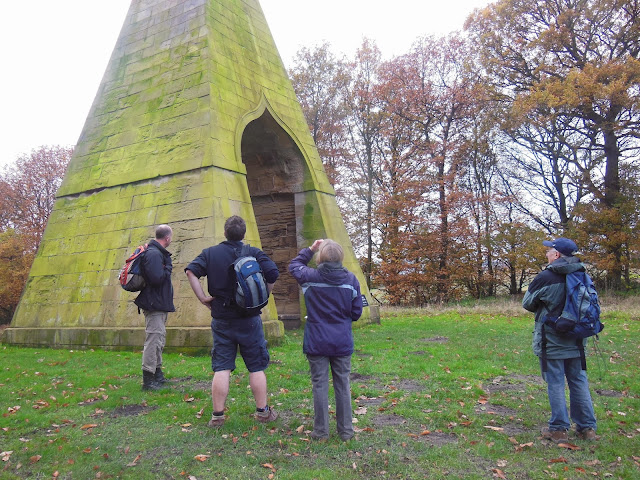 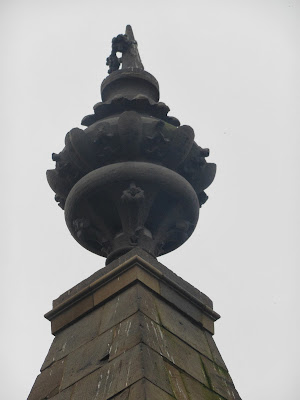 We had a big discussion about what these could be.  If you study the photograph with our party on it, you'll see that these marks are all at chest/head height.  They look like musket ball marks, and we wondered whether some sort of firing squad had happened here! 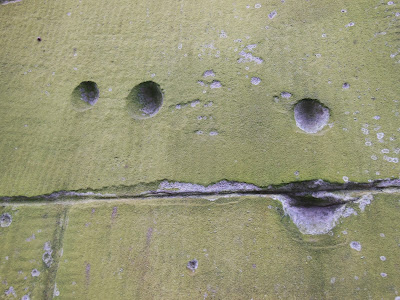 From there, we walked up to Hoober Stand, another folly. 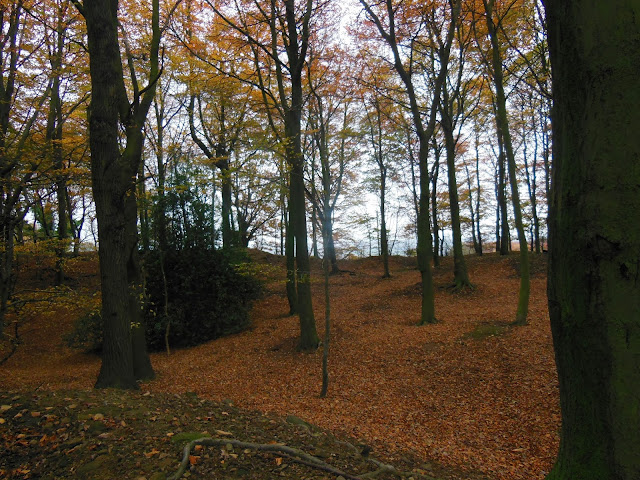 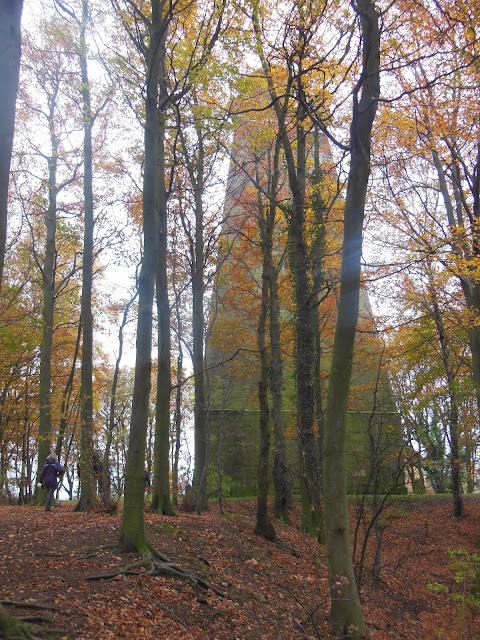 This folly is open during the summer and worth a trip to the top - if you have good legs! 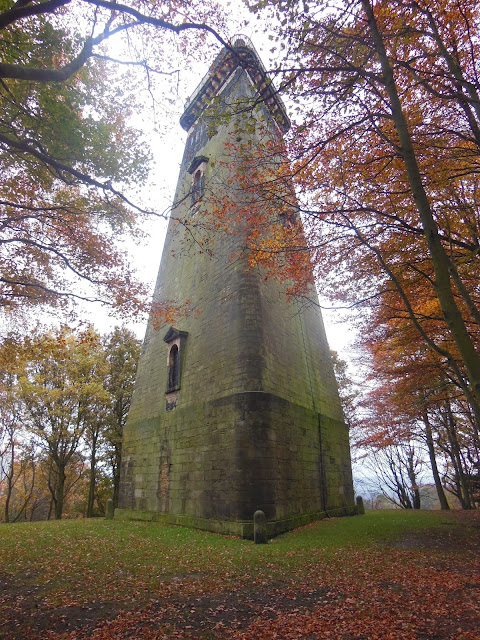 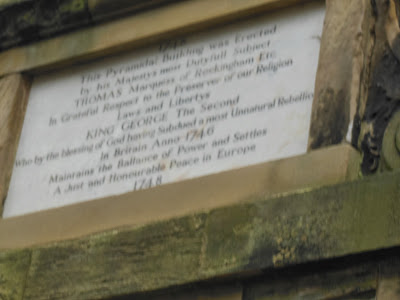 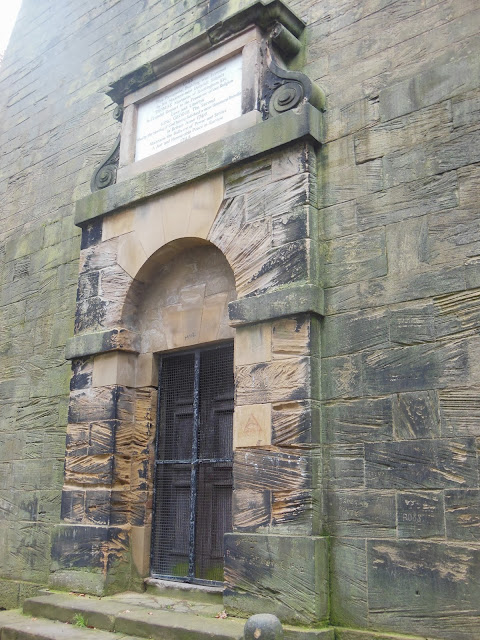 After a stop for our butties, we walked past the Mausoleum (another folly), through the park, and past Wentworth Woodhouse.  Anne and Geoff were not from this are and had never seen the big house before, so were suitably impressed.  I think they are planning a return trip for a visit to the house. 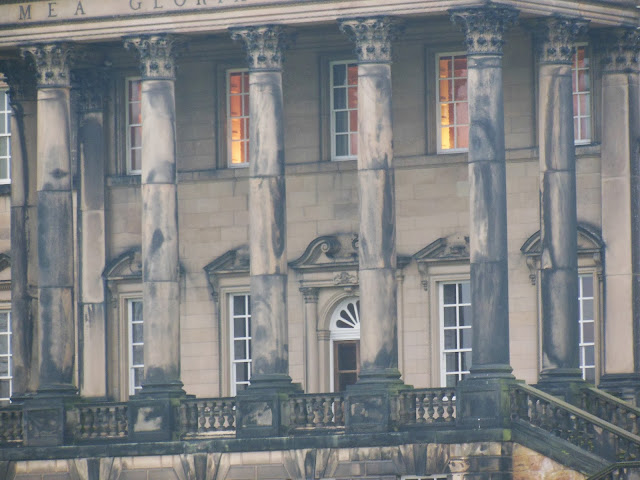 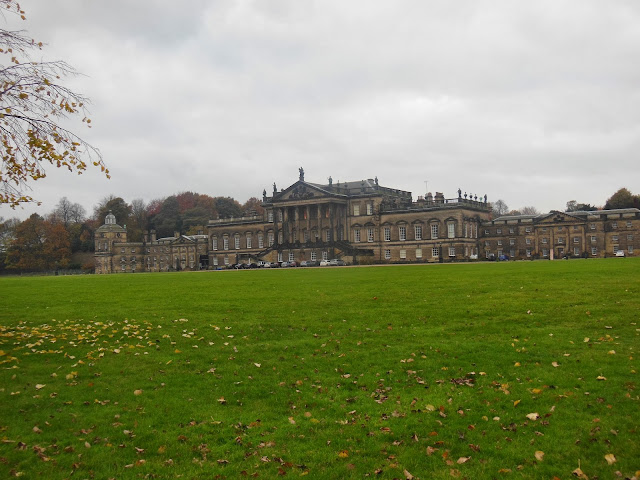 We thoroughly enjoyed discovering a few new footpaths that we had not been on, and a bit more of the history on our doorstep and I would love to go on another walk this this group of very interesting people.  It certainly added an extra slant to a walk we tread often. 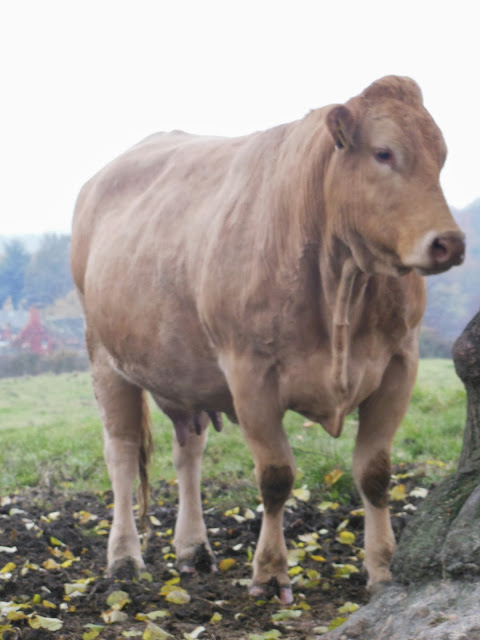 According to our guide from the Heritage Centre, they have a bit of money to spend on the place, so I cannot wait to see what they have planned.  It's my favourite place locally so I shall keep my eyes open.  I did have a senior moment half way around when I couldn't remember if I had switched the slow cooker on or not! But I was thrilled to smell it bubbling away when we got home.  A perfect Sunday.
Posted by Diane at Saturday, November 23, 2013

Looks like there were some amazing things to see on the walk. Its great to learn more about local history, especially when experts are explaining it. Your stew looks yummy!
Liz

What a lovely fay you had learning more about the local area. Lucky Ann and Geoff to have you with them as they got you for company and all your local knowledge too.
Lisa xx