We are not regular church goers, but when I had kids, I wanted them to know what Christmas was all about, and so we have always attended the Christingle service at church on Christmas Eve. I was delighted that when I gave them a choice this year, they still wanted to go. It was a lovely service - the vicar always gets stressed though about the fact that there are 200 kids aged 0-11 with lighted candles! 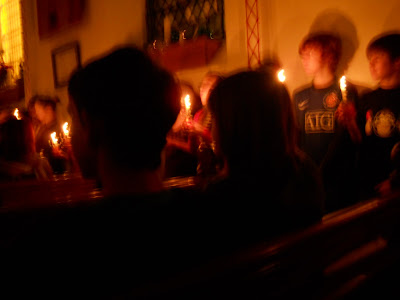 We also get a visit on Christmas Eve at the end of our road from this chap. Again, the kids insisted on going and where more than happy to get mistaken for "children" and come away with a bar of chocolate! 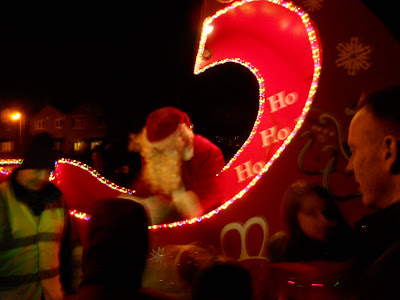 At around the same time, I realised that I was coming down with describe as "Man Flu". I thought that I would struggle to cook lunch, and planned to lounge on the settee shouting orders to enable others to do the cooking, but then, just after the present opening, the DQ was struck down with a nasty vomiting disorder. Not only is she a Dancing Queen, but when she is ill, she is also a Drama Queen and very demanding of a lot of attention. And so it became a joint effort to get food on the table, as well as nurse the sick DQ who could only manage a small portion of mashed potato. My poor mum arrived and was horrified to find a house full of germs. If she could have worn a mask,I'm sure she would have! She ate lunch (which miraculously turned out very well) and got out at lightening speed!
Today, DQ felt a lot better and has had to go to work, (but she has text me to be prepared as she's feeling queasy again!) and I'm still streaming, coughing and sneezing and thanking the lord for Lemsip Max strength and Tena Lady! Hubby has also to go to work till 11pm, so I feel Christmas has been a bit of a wash out! So, I'm planning on a re-run at the end of the week when we are hopefully a lot better and no one has to work!
Hubby, the young man and I managed a short stroll around Wentworth this morning - its a bit of a tradition around these parts, and you tend to bump into folk that you haven't since since last year! 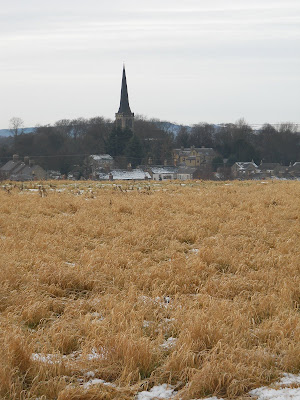 It was just far enough and great to get a bit of fresh air. 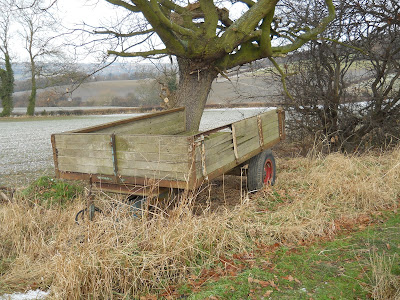 And I don't know if it was my imagination, but it didn't seem as cold as it has been, although the earth was still solid and the ponds frozen. Perhaps its only -5 now! 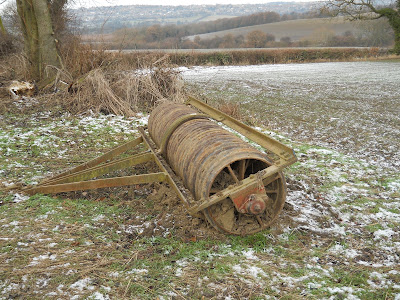 And these chaps were causing traffic chaos as they danced through the village. 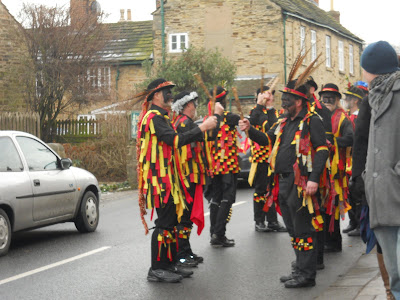 Hope yours was a lot more successful!
Posted by Diane at Sunday, December 26, 2010

I love reading your posts about your Christmas (uhhh, not the sick part, of course!). Hope you are feeling better; I've done the "sick at Christmas" thing, and know it is just the worst!

The photo of the landscape with the buildings (and steeple) far in the back ground is wonderful!

Oh no, it's awful being sick at Christmas . I hope you are all feeling well again soon and " take 2" goes much better x

I hope you are feeling better soon.
Ours was a very quiet Christmas Day and an even quieter boxing day
Sue

Oh I'm sorry it turned out like that :-( My Christmas was very quiet and I am enjoying the Sunday because we don't have Boxing Day here. Strange for such a Catholic country. Hope everything gets back to normal (still snow lying around here with -7 at night and hovering around 0 during the day...)

Oh, sorry to hear that your Christmas was 'a bit of a wash out'. I'm sure there were lots of good bits. The Christiungle service looked good. Ours used to go when they were little and often go and take their own little ones now. There's a church in a nearby village that usually has a donkey in on the Service! Sadlyt cancelled this year - too snowy / icy. Hope you're all feeling better by now! Abby

Hope you all feel better soon :o(
in time to make a new start :o)

What rotten luck to be ill at Christmas ... (I had pleuresy last year) ... all that work for nothing! Hope you all feel better soon. We've had a lovely Christmas Day but an awful Boxing Day. Mr B. has pulled his back this morning and is in agony, and my mum has the same bug as your daughter. We should have been going there this afternoon. All cancelled!
We went to the Midnight service at our church on Christmas Eve. We're not regular church goers either, but after the year we've had I just felt a need to go. I'm so glad we did ... it was very calming and peaceful.
Lots of love Kathy xxx

Oh what a shame! Hope the re-run goes well.

Oh dear so aorry that you and DQ have been ill. Hope you feel better soon and that you enjoy your re-run later this week. Take care:)xxx

Aw, hope you & DQ both feel better soon. My mum had a cold too. Take it easy til you're on the mend.

Hope you feel better soon. Nigel has now been off work for 16 days, bronchitis, antibiotics the lot and he sounds and looks lousy! I have been on lemsip for 3 days now as well!! We did take Nigel's father out for Lunch yesterday as it was booked and paid for but it was not an easy day :( Diane

Oh no. I am sure it is the build up to Christmas that makes us all at a bit of a low ebb so we pick up colds and bugs so easily. Hope you are feeling better soon.

Oh no I'm sorry to hear you and DQ were feeling so awful.I reckon your vit C idea is a goer. As of 1st Septnext year I reckon we should start taking supplements to boost us!
S was poorly all voer Christmas too. And I'm not sure when we're going to ahve our Boxing day as it was supposed to be with G'sfamily in Salisbury and they are poorly too!
Lisa xx

why do these blasted bugs ALWAYS strike at Christmas?? Never an opportune time but the most festive of the festiveness is particularly cruel! Hope you are all feeling better and brighter. (Tip - have a wee dram (or two) instead of lemsip...may not cure it but you certainly wont care!!)
Hope you and yours have a FAB 2011!
Best wishes BH x

Oh no hope you are all stocking up on chocolate and cheese, I've heard this helps, especially with manflu, maybe not with the other!

Just having a day in today, ps3 games for Nick to play!!