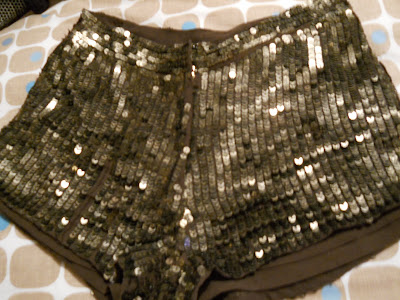 ...and if you give her a chance, she'll just dance dance dance!!!
Anyway, on Friday night, the roads were still like an ice rink and as we braved them to fetch the Dancing Queen from the railway station, hubby commented that it would be great for us to get home and know we were all safe in the warmth. However, once in the car she announced that she was actually going out with some old school friends and wouldn't be home until after 3am!!!! She donned her gold spangly shorts!!! but on top of several layers of tights, and she did wear her wellies and big coat which she left in a cloakroom at the night club (she knew she was not getting out of the house without them!). So at 10pm, her friend called for her and off they went. At times she makes me feel so old, and then I remember what it was like being 18years old.
And if you want to take yourself back to 1975 and join Kenny singing Fancy Pants - CLICK HERE
Posted by Diane at Sunday, December 05, 2010

Oh, yes I remember this scenario well when our 3 girls were younger!! They live life, don't they? Love the hotpants! I had some a bit like that (cringing now!) many, many moons ago at Uni!!

I remember those days well. It's a different matter nowadays though, I'm usually in bed at 10pm, not on my way out. I found your blog a little while ago and the first few posts I read caught my eye, so much so, that I've been right back to the beginning and read all your posts, which I've really enjoyed. I live in Leeds so I recognise some of the places you write about. My son is 15 too, and a cricketer. This year's a bit of a stressful year for them at school. I'm looking forward to reading more of your posts.

Brilliant! sometimes I actually think I'm turning into my mother!

Old as I am I do recall the days of going out about the same time as my parents were going to bed. Wouldn't have missed that for the world, so glad it's over. Keep cosy.

I never thought it would happen, but yes I’m now an old fart that would rather stay in at night time. :0)

From another old fart- gorgeous pants ohh to be young and skinny again !

...as victoria wood once said

"I remember when PANTS were pants.........every gussett a memory"

When I think of some of the clothes I used to wear........ At least i had reasonable legs for hot pants!! Diane

Yes, I know what you mean about feeling old, I feel quite young until all of my children and grandchildren are around my and then I feel like methuselah. lol

hot pants I love them because 6 months out of the year thats all I wear ( only NOT that short) & yes they make you feel young so go on wear them with pride no matter how old you are (I,m 60 next)

Oh, I so remember these days - when I was young and when my daughter was young(er). To be honest I'm glad I'm old(!) - it was all such hard work!

Oh my! Are you sure they are not the pants that Kylie wore?? I have all this to come in the future!

Thankyou for the welcome back, and your lovely wise comment.

those hotpants remind me of Kylie and her spinning around video, oh to be 18 again x

Yes, they are the fanciest of fancy pants! What a hoot...I don't think I ever had anything quite that sparkly...EVER!!!! :0)

Bet your DQ look fab in her glittery hot pants! I've just been catching up with all your festive and snowy posts - I've only been away a week but have missed so many - you have been busy:)

I'm jealous, that a) I'm not 18, and b) that I wouldn't be able to fit into these little sparkly shorts anymore :0(

Hope she had a good time.

Teenagers! I'm glad mine are past that stage.