We spent a lovely day in Cromer. We ate Cromer Crab - which was delicious. I have a fondness for Victorian piers. 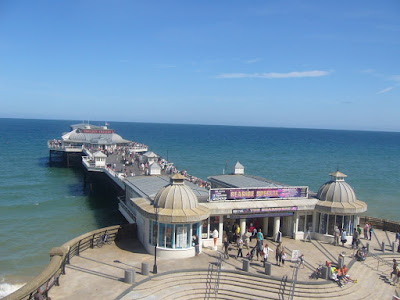 We all commented that a lot of Norfolk reminded us of parts of France - especially the Ile de Re where we visited last year as that too was very flat. Although this photo was taken in Cromer, I felt it
looked as if it could have been taken in France. 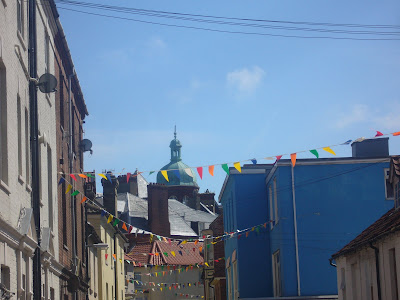 I hope you appreciate how far I had to walk to take this photo for you!! 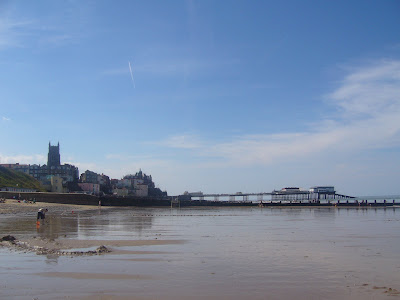 My favorite beach was at Sea Palling - however on our first visit, they had suffered a plague of Ladybirds - literally millions of them and it was very uncomfortable. They had all gone by our 2nd visit though. 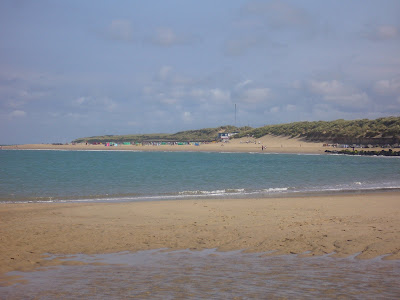 We spent a lovely day in a motor boat on the broads. The houses were very spectacular along our route. I thought that this would make a great "Gin Palace" What do you think Blueberry Heart? Might be a bit risky near the waters edge!!! 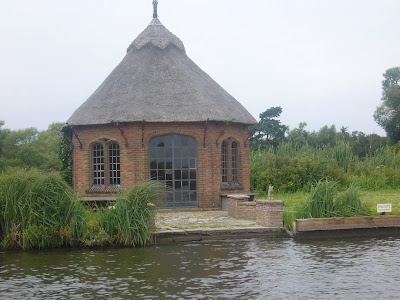 This was our trusty vessel. Hubby and I had an easy day as the kids drove it most of the time. 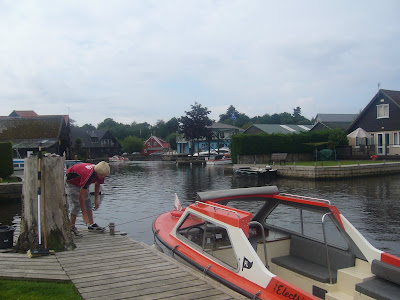 My favorite day out was a canoe trail but I have no photo's of this yet as I took a disposable camera - ever the "Realist" I thought I might fall in!!! As luck would have it, the other 3 got a canoe to paddle in together, and I got lumped in with the instructor!! Very young, very fit, very tanned nice young man - he could paddle and steer it all by himself!! so I ended up with not much work to do. I glided along in very serene style, feeling slightly like Mini haha!! They took us on the Trinity Broads which don't allow boats with motors. The wildlife was stunning.
We had spectacular sunsets every night. 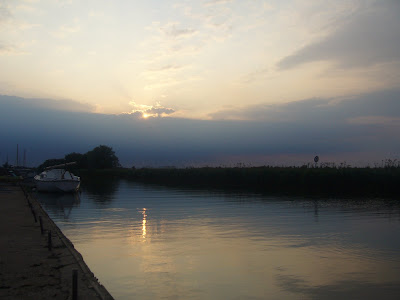 We visited Great Yarmouth one evening as we had never been. We didn't stay too long. The only positive thing I can say about it is that it has a great beach and it was sunny. They were holding some volleyball championship that the young man found interesting. 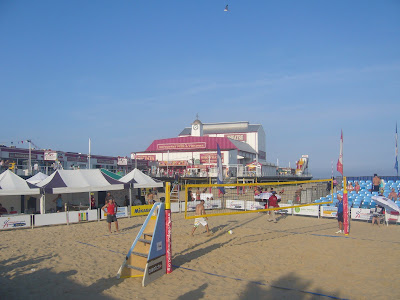 We also had an evening stroll around Norwich which had some lovely old streets. It seemed to have some great shops too. I'm not much of a shopper (perhaps I would be with more cash!!) and hubby always manages to get me to the shops seconds after they close too - a skill he has perfected over the years!! 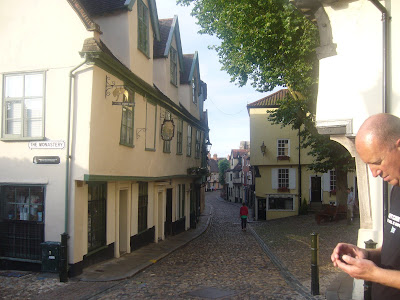 We hired cycles one day and went to How Hill - about a 14 mile trip in total, but all very very flat - my sort of cycling!! The "Hill" bit is a total misnomer. It is apparently the highest hill on the Broads, and stands at just 12 metres above sea level. I thought you might like to see the patchwork in the bedrooms in the Marshmans cottage that is there. 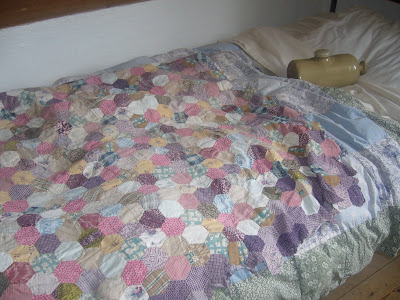 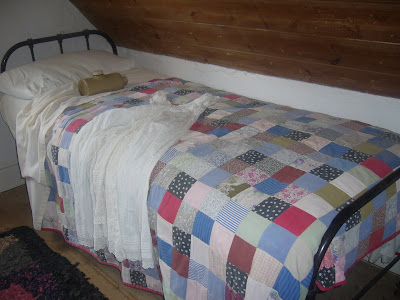 How Hill is very tranquil. We had a great day out (but I couldn't get back on the bike the next day - not even with all my padding!!!).
Horsey Mere (National Trust) was lovely too. There are lots of these old windmills dotted around. 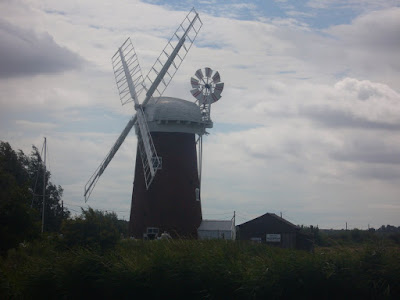 We walked to the beach at Horsey. When we go to St Ives, I get very giddy if I see a seal in the water. Imagine my utter delight at the sight of these little beauties on the beach!! 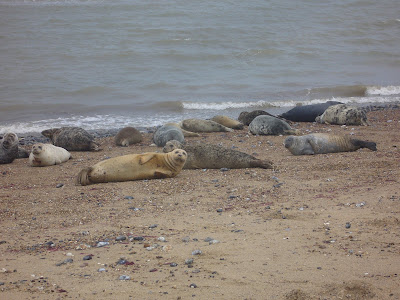 I stopped counting at 100!!!! They were gorgeous and not at all bothered about us being there. PS congratulations on your 100th post -I missed that grand event on mine a little while back unfortunately...

Very much enjoying seeing all your holiday photos, you did so many different things, what a great time to have together.
Congrats on the 100th post!
Lisa x

How lovely to see Norwich and the Broads again!
You're a veteran..congratulations on your 100th post! ;-)

How amazing to see seals! They're beautiful!

I agree about the gin palace, I'm in!

I've been reading your blog for a while, and am going to de-lurk myself and say hello. I love your holiday photos, looks like you had great weather and lots of experiences to remember. Norfolk looks very beautiful, somewhere I would love to visit, especially that gin palace!

I love walking on the Cromer pier in the winter when the wind is blowing and the waves are crashing. Did you visit the lifeboat?
Congrats on your 100th post.

What a great adventure you have all had - I've loved looking at your photos and reading about the places you have visited - I love the Norfolk beaches and sunsets -wonderful aren't they? I've never seen seals that close - how amazing:)

What stunning and atmostpheric pictures! I was lucky enough to work in Norfolk a few years back and I love the area - I was really transported back by your sunset pic on the broads, reminding me how tranquil it is there...note to self: next years holiday perhaps...?!

Ah! Cromer! We spent nearly all our holidays there when I was a child and later a teenager! We used to play French cricket on the sand when the tide was out and shelter in our beach hut when it rained!!

Your pictures of Cromer bring back so many holidaying memories of Easter two (I think!!) years ago and 'Oh my' how gorgeous are those patchworks??

I've spent many a happy holiday in Norfolk....years ago! I love Norwich too. As a student we had a history trip there and I had to study the city walls!!
(Although I think we were happier studying
the pubs!) ;-)

Congratulations Diane on your 100th post!!
I don't think you could have picked a better spot on the landscape than Norfolk, we had a boat there for 7 years & I feel like I've gone back in time...have to show Baz this, thanks for taking us :0)

What beautiful beach pictures! I particularly love the one of the pier. Welcome back, and glad you had a lovely time! x

Well done for 100 posts! Such a lovely sight, those seals. I would have been in raptures if I had seen them. I'm reading through your travels and so far you have been to all the places I haven't! I think your second photo has a touch of the Neopolitan about it. x