I don't think anyone would disagree that Mrs Thatcher started the decline of the large industries in South Yorkshire - firstly she closed the steel works and then the coal mines. Mr Blair continued the trend, sending our large manufacturing companies to the far east. Apart from the jobs, what the area lost was funding for a very many of its leisure activities. People in the area used to live near to where they worked, and also play there too. The miners welfare scheme and company organised social clubs funded almost all of the sporting activities, operatic and drama groups, music societies, parks and gardens etc here abouts. In the late 80's and early 90's, many of these facilities went into serious decay and decline.

The Lottery fund has picked up some of the slack, and local councils have had to dip into their pockets to get many of these facilities back into shape, but the sense of community is lost - possibly forever. However, something amazing has sprung up around some of the projects that exist - "Friends of..... " 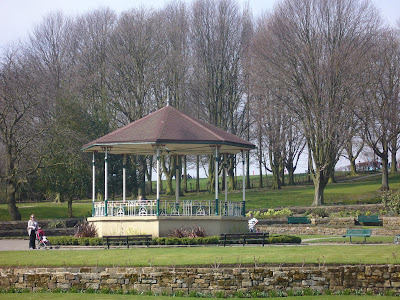 Elsecar park had become a victim of the decline. When I was little, Elsecar Park was beautiful and a great day out. I have some wonderful memories of the park (apart from the time when I fell in the paddling pool fully clothed and my mum made me strip off all my wet clothing and wear my dads jumper instead. I was 13 years old and the park was full of other teenagers from my school who knew me!). 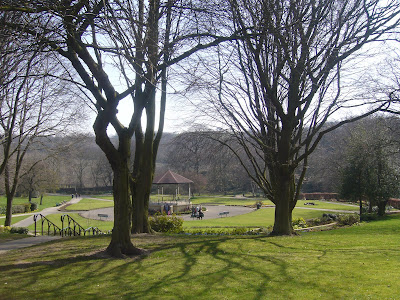 A few years ago, the park had become a "no go" area - full of yobs and druggies and not a nice place to be. However the local council, assisted greatly by "The Friends of Elsecar Park" have completely turned this back around, and once again the park is a lovely and safe place for families and kids to be. The "Friends" organise fund raising events, nature events, music in the newly restored bandstand - for both old and young alike, built great new play area's and much more. The "Friends" consist of - like most groups of this type - busy people, mums, single, females, males, young, old from all walks of life who have a desire to halt the decline and improve the area in which they live. Thank goodness for the "Friends" - perhaps we should do away with politicians and get a group of "Friends" running the country instead. I'd vote for them.
. 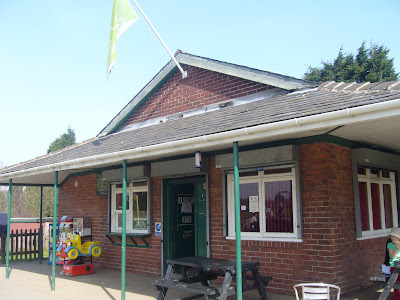 They have reopened the cafe - and were doing a roaring trade on Saturday when the young man and I decided we needed to get some exercise, so we took advantage of the 9 hole pitch and put. 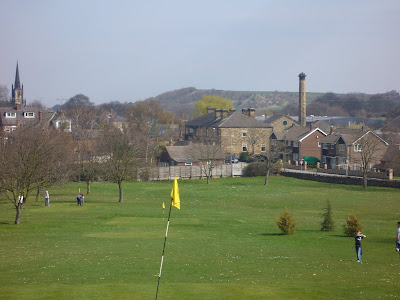 The only problem we encountered was the amount of daisies on the course made it difficult to spot where my ball was - not that it ever went very far!! 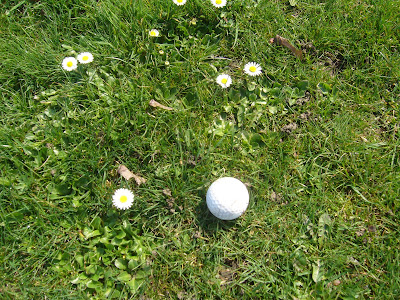 Here endeth the party political broadcast for the "Normal Folk who make better that which politicians ruin" party.
Posted by Diane at Monday, April 12, 2010

They are doing it here, too. Also our new "County" - Cheshire East (what on earth is wrong with East Cheshire??) is spending money and made a wonderful job of revitalising the children's playground, which is now called a "Community Space"!

Hello Diane,
The north has definately suffered worst at the hands of our polititions! You'll like this: a few weeks ago my nephew (16)& his class were asked by the Headmaster to get some questions ready for a local politition who was visiting their school.

He came into the main hall & was greeted politely by the children...1st question? Could you tell us what you've spent your expenses on & can you justify it?
It wiped the smile right off his face!

I had to smile though!
Well done on this blog, good to see people power back in play!

(to coment at the Madhouse you click on her title at the top of her post which will feed you to comments. I don't twitter either - just chat A LOT ! )

Fabulous - I an so heartened to see things like this . ( don't get my hubby on the Mrs T subject ! )

Yep, given the demise of industry and communities here in the north east, you can count on my vote.

..erm..social clubs..I've always wanted to ask you if they really exist in the UK, as my neighbour always tells about them..she's the mother of the greatest English snooker of the 80s, a certain Tony Meo..ever heard about him? Is it true? You know sometimes I just think she's a mad old lady ;-)
xxxxx

Coal and steel industries gone from round here - much of the pottery made in the far east - tis happening here too! Both of the Museums I've worked at over the years have had a'friends' group and they were always good at getting things organised. It always seems to be things like parks, museums and libraries that suffer the first cuts and get closed or left to stagnate.

I like a good story like this! I always feel sad if I see somewhere that was once beautiful that has been left to rack and ruin, its wonderful to read how caring folks want to spend their own time making things better again.

I think your idea for 'Friends' who could run the country is spot on!

have left a message on st. ives shop lower down :o)