Ive had a few great nights out recently. On Saturday night, we went to see Sheffields own "Everly Pregnant Brothers". These are a great Ukelele band with a great lead singer that sing tunes you all know, but amend the words to make them very significant to Sheffield - and hilarious at the same time. They were playing their first BIG gig at the Lyceum Theatre and it went very very well for them. My favourite songs were about the "Hole in the Road" (or "Oil in ruard")a Sheffield landmark that we no longer have, and one about "Hendersons Relish" our local sauce!
If you are local, try and catch these at some point - If you're not, you probably wouldn't have a clue what they were singing about!
(Photo from their website) 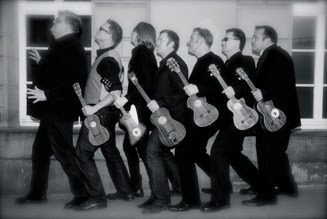 Earlier in the week, we went with our WI group to a local small theatre to see the musical version of "The Full Monty". It was highly entertaining as you can imagine and we all had a great laugh. However, I did notice that one of the strippers was a guy who delivers stationery to us at work. I shan't know where to look when he calls next time! 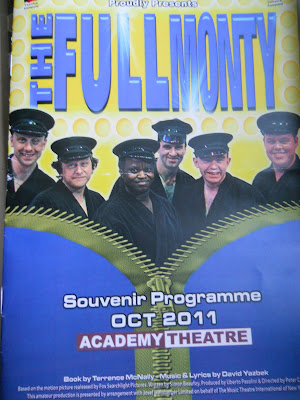 You all know that I like a freebie night out, and so I signed up for "An Inspirational talk" to coincide with Fashion week in Sheffield - something organised by our local Business Link. In the past, these events have been accompanied by a great buffet and a couple of glasses of wine, but on this occasion it was disappointingly only nibbles and fruit juice. Business Link is being disbanded next month though, so I think they maybe saving the budget for a farewell party! Any way, the night out was great. It was held at the newish swanky St Pauls Hotel in the middle of the city. 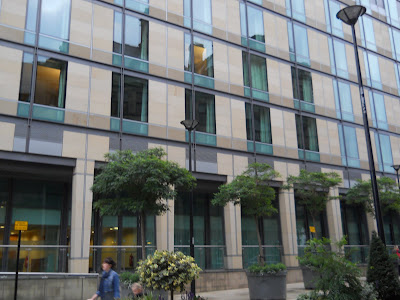 The first speaker was Eric Musgrave who has been a fashion editor for some time. He talked about the decline of manufacturing fashion in the UK - something that hit hard in this area, and also how most of what is still manufactured is very high end fabrics and garments which are exported abroad.
Then we had a talk and fashion show by one of the directors of a company that manufactures clothing for many of the high street stores - Phase Eight, Hobbs, Laura Ashley etc. They have launched their own brand which can be currently bought at some John Lewis stores and also on line. The brand is called Damsel in a Dress. The brand is aimed at the professional woman who wants more than the high street, but can't afford designer. Way out of my price range - but I was impressed by the fabulous fabrics they used, and treated myself to something from their sale range (which I have to say I am highly delighted with!). The whole evening made me realise that slip into "Waynetta Slob" mode far too easily, and I need to rethink my entire wardrobe!
Posted by Diane at Sunday, October 16, 2011

Ole int road
oh I do miss that grotty underpass......I even miss the fish tank

You have been bsuy. My Mother in Law saw a local production of the Full Monty about a yera ago. She said it was highly entertaining as not all managed to get their hats in place at the right time!
Lisa x

I remember the 'Oil in ruard' and the fish tank - happy days!

I really must visit the city centre but I think I will need my friend to show me round, I'll get lost.

Sounds like you have had fun getting out and about.

Sounds like the Sheffield group was hilarious and I might still remember some of their inside jokes.

I remember the 'oil in ruard' - we always had to pass through it from the bus station to the shopping area. The band sound hilarious. Sounds like you've been having a great time out and about. Will you tell the stationery delivery man that you've seen rather more of him than usual, I wonder?:)

Sounds like you are having a lot of fun Diane !
Thank you for your sweet comment x

loving the sound of the ukelele band........what a grand week....my son recently spent 3 weeks in Sheffield doing sound stuff with an NYT project....a huge show they put on in a giant housing estate..........he absolutely loved it. For all his foreign travel he hasn't seen much of England so it was very exotic....that and being billeted in halls of residence with ensuite bathrooms and what sounded like a 24 hour party service!!!

I have seen their few articles on John Lewis stores they have done a great job.