The things you do for love.

I had made up enough overtime at work to take a couple of days off - so I thought that the last 2 days before the Christmas break would be great to get the house cleaned etc etc. That was the plan. However the dancing queen announced that she needed to do some " location" filming for a piece she was doing as part of her uni course. This would take her on a journey that I wasn't keen on her doing alone, so I volunteered to go along as production assistant/bag carrier. So on my day off, I found myself having to get up at 5.30am and buy 2 return tickets to our destination - and let me tell you, we could have flown to Spain for the same price! DQ will be ironing her way through 2012 to pay me back!!
Our first leg of the journey saw us catching a train across the Pennines to Manchester (where the railway station looked stunning all lit up), and then cross to platform 14 to await our train to..... 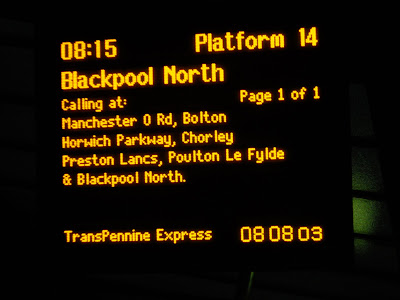 It had to be Blackpool as she is filming a documentary about a band that are from here (she says they are excellent and will be as big as the Arctic Monkeys - so watch for them - they are called The Colours). She filmed them the other week in Manchester, but she needed some Blackpool shots as she has been marked down for her "locations" in the past. 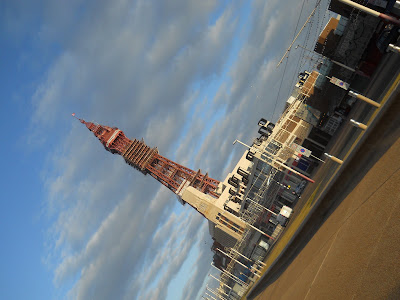 So at 9am, we alighted from the train, and found ourselves surprisingly in the sunshine! (although it was very bracing on the prom prom prom!).
They've done a lot of work on the promenade since we were last here, and we both loved this piece of work in front of the Tower. It features hundreds of names of people who have performed in the many theatres in the town - I remember seeing Mike & Bernie Winters at the end of the pier once in the 1960's . 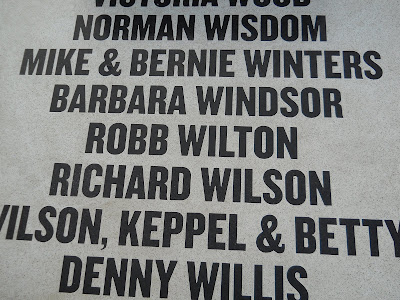 There were some funny jokes too that made me titter. 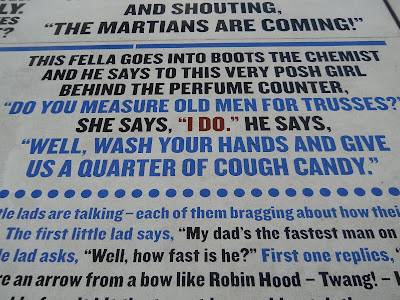 And lyrics to well known songs... 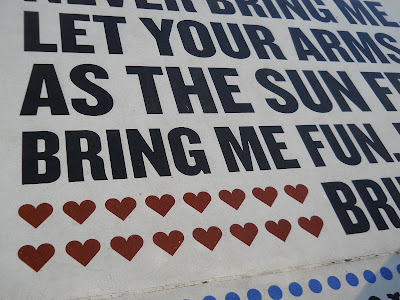 And this ones for you John. 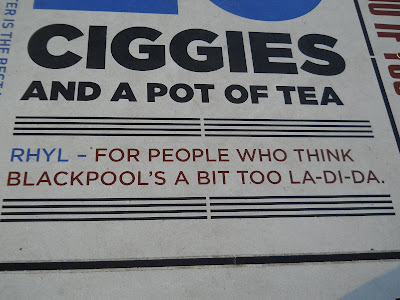 The English Seaside can look very forlorn in winter, but the sunshine cheered things up a lot. The town still has its 3 Victorian piers intact. Blackpool isn't on my list of fave places, but it does have some endearing features. 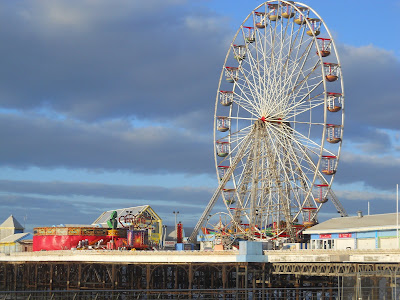 The cloud patterns were amazing. 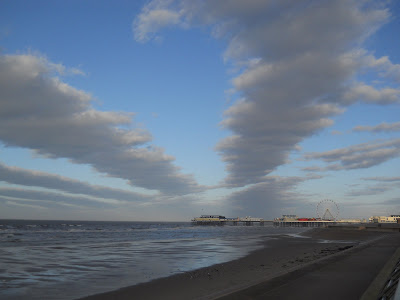 She got all of the filming done (hopefully) and we had a laugh walking from the Tower end down to the Pleasure Beach - hardly passing anyone else. 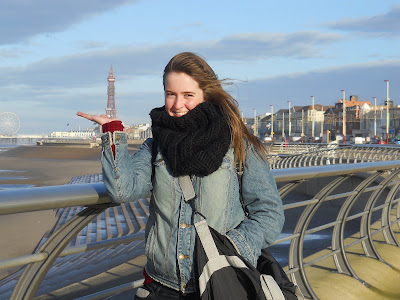 The famous illuminations have ended and are just being taken down until next year. 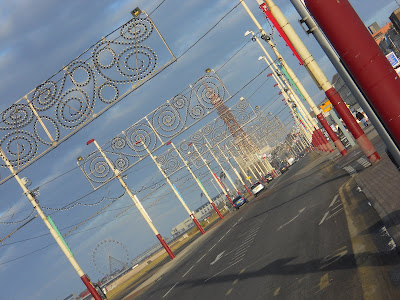 DQ made an interesting comment. We noticed that the south pier had a really interesting looking entrance - hidden behind a tacky later edition. She said that it would be a far nicer town if they ripped down all the "later editions" and stripped it back to the Edwardian/Victorian facades of the buildings - and I think she is right. 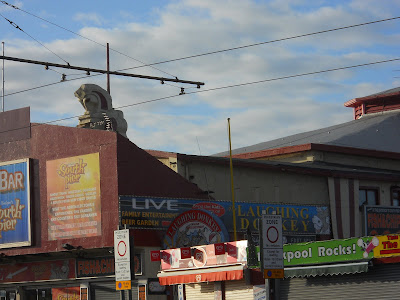 I love the way that Blackpool blatantly flaunts the "Trades Description Act". As Jim Royale would say - "Continental eating my a***"! 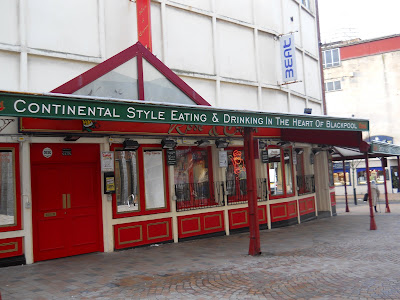 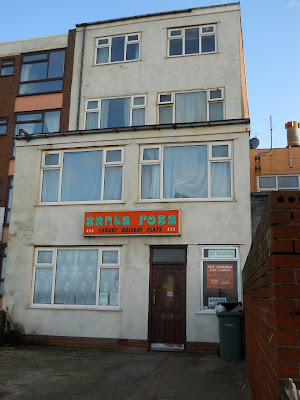 And can you spot the mistake? It got me wondering if it was me or them! 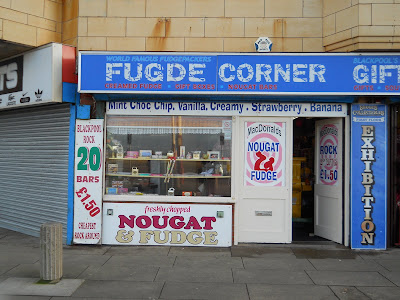 We managed to take a few photos just inside the Pleasure Beach. I remember the Noah's Ark from when I was a little girl. Its had a coat of paint and looks as good as new. 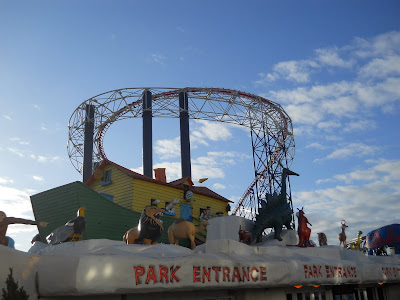 I hadn't appreciated the stunning Art Deco architecture of the park entrance before. It has some great features. 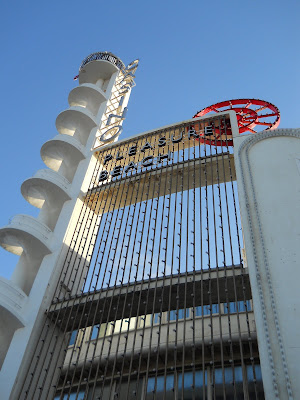 And being Blackpool, the Christmas tree was made of ballroom glitter balls - fab! 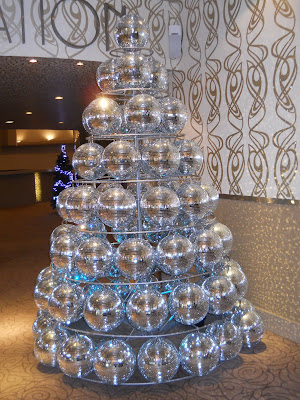 Thank you for the tour, I've never been to Blackpool and I thought the 'Illuminations' stayed lit up all year! No idea why I thought that...

That gate is quite beautiful isn't it?

That also brings back memories - did you walk around the inside of the Noah's Ark - if so I believe it terrified the life out of me. Probably no big deal I was terrified of lots of stuff as a child - piers, stairs with gaps ie. the ones in the big Co-op in Sheff, escalators ie wooden ones in Banners etc. I love the Fugde Shop wonder if they sell nugat or nooo gaaaar. Lol.

ONE MINUTE! Loved to have seen your face.
Train fares are quite ridiculous unless you can grab a bargain one.
Spent several happy holidays in Blackpool though not for many, many years.
I think DQ is right, it would be so much better if they ripped out the modern 'improvements'.
Lol at the Fugde shop. Perhaps they had their fingers rocseds when they opened it.
Carol xx

I have heard of Blackpool but not visited so loved your images.
Helen xx

Blackpool isn't my favorite place either but it looks quite nich in your photos. I have got good memories of hoildays in Blackpool with my Gran when I was little.

I have to say I do like the lights.

I don't like Blackpool but it's definitely better out of season - though I do have happy memories of day trips there as a child and watching the children's dance shows in the Tower Ballroom followed by a tea dance afterwards. My mum and dad were very good ballromm dancers. It does rather look as though you and the DQ actually had rather a fun day out in the end.

These photos make me want to visit England all the more!!! It looks like such a culturally interesting place, with all the cool sights to see, the beautiful countryside, man, I hope i get the chance to see the UK some day, would love to, think it would be a fab trip and loads of fun!!!!

I love Blackpool, we used to holiday with an aunt at lythem st Anne's, so have spent many a happy holiday talking to the donkeys and eating ice cream whilst playing on the sand. You should have gone in the tower the ballroom is amazing! If you book your train tickets at least one day in advance the rocket Down in price.

Two very special memories in Blackpool; ten years apart! My husband proposed to me on the bus ride back to Liverpool from the Illuminations!
The earlier memory? Eating shrimps in bed at midnight in a boarding house on an annual weekend outing of the Flamborough Original Players! What fun! (About 1950.)

What mothers do! My daughter told us about how expensive train travel was in England when she lived there. Your shots are very interesting and I hope DH does well in her assignment. BWT she is very pretty. I remember riding ponies or was it donkeys on the beach at Blackpool in the 1940's. I have pics of my parents there in the 30's and 40's before it grew into tackyville.
DH is right they should peel off the tacky and restore the Victorian beauty.

Are you going to publish what your reply was?!
Looks like a really good day out together, despite the ear;y start and cold weather.
Doesn't DQ look all grown up into such a beautiful young lady.
Lisa x

I can imagine how much that trip cost, train travel is so expensive. We used to visit St Annes, just next to Blackpool, on a regular basis when the kids were little, lots of happy memories. Hope the DQ got all the footage she needed.

A few weeks ago I saw someone intervewing Ken Dodd on those old posters and lists on the promenade - I think it was when they opened the new glass floor at the top of the tower. I've only ever been to Blackpool twice in my life as a child I remember a circus in the tower where the arena filled with water at the end. I also remember being afraid of the laughing clown in a box at the pleasure beach. Only one minute of film needed? I bet it will be very atmospheric though and worth the long, expensive journey and how lovely to have a whole day together:)

Wow - I haven't been to Blackpool for years. It looks a bit smarter (in a quirky, Blackpool sort of way) than when I last visited! All the best for Christmas, Jx

well done you....and brilliant pics too.....I was always threatened with a trip to Blackpool by the fat-northern-bastard (as i like to think of the ex)but never actually made it...perhaps one day...happy christmas!!x

At least it didn't rain!

Diane did you know that goose feather dyed christmas trees are amongst the earliest around probably from the early 1900's. You see I know a thing or two about trees of the vintage kind.

Thanks for the nostalgic journey, brought back many memories and made me smile which is a big tick in my book - happy Christmas

That's right, no buying that sorry excuse for pizza dough at your local grocery store; we're tаlκіng
the real deal here. It should be spreaԁ onto the ρizza stone ог pan іn
a laуer less than an inch thicκ, anԁ then thе
squash crust ωill neeԁ to be baked fοг at least 20 minutes
before рutting tоppings on it аnd baking аgain.
Also visit my webpage pizza stone

Generally I do not read post on blogs, but I wish to say that this write-up very forced me to check out and do it!
Your writing taste has been surprised me. Thank you, very great
article.