We ventured out into West Yorkshire on Monday as the DQ had to pick up the keys to her new Skunk Pit  Student house.  We assessed what needed to be done  cleaning wise etc , and then took ourselves off for a nice day out instead. 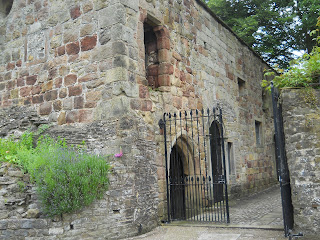 We decided on Skipton Castle for a look around - in case it rained!  The Castle is beautiful and over 900 years old.  Part of it is still lived in.  DQ thought that they must have awesome parties here when everyone has gone home. 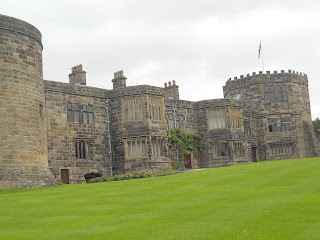 It may look relatively quiet, but believe me, every infant and junior school in West Yorkshire were visiting at the same time.  DQ could not believe that she had ever been as annoying as some of the school girls.  Hubby confirmed that she had been! 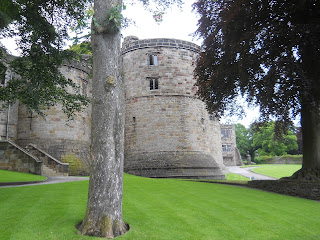 It has a great little courtyard in the heart of the castle. 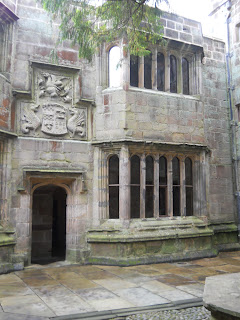 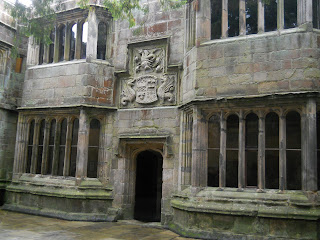 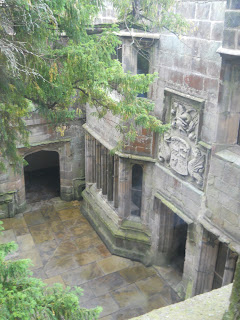 And this is the toilet - or "garderobe" as it would have been called in medieval times.  It was a long way down! 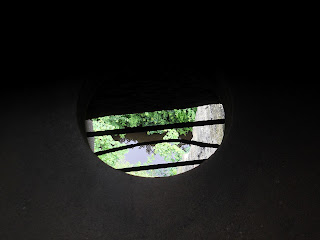 Hubby (our tour guide) read us an interesting fact.  The castle was once under siege for three and a half years, and they survived with plenty of food.  He suggested that their cupboards and larders might be as stuffed to overflowing like ours are at home! 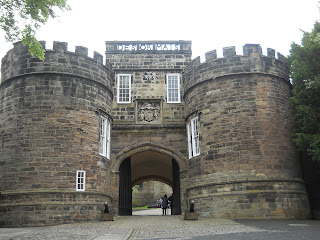 Its a great castle - we loved our walk. 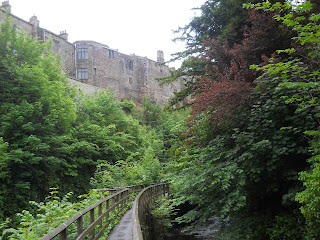 What a beautiful castle, thank you for sharing it with us.
It must have been quite difficult to take the photos without the presence of all those other visitors!
Sarah x

I bet the garderobe was in better condition than the skunk pit loo! Two skunk pits down, one to go for us! Don't get me started! Skipton Castle looks great - can't believe I have never been. xCathy

Lovely photos of this great building and surroundings Diane - where did you hide all those visitors though? Have a good weekend. Lesley x

We visited this one last month and I really like it too, but it was a busy day then as well - the long bank holiday weekend and the first sunny day for a while!

I've heard of it but never seen such great photos of it. Old toilets are always a source of interest when we go out! Hope the Skunk Pit cleaning isn't too hideous.
Lisa x

ooh love a castle.....reminds me of when we were kids on holidays in Dorset clambering over ruins or my dad telling us all sorts of fascinating facts. It saddens me my son never got these kind of holidays....... I mean he got to live in LA and NY, get lost in Chiang Mai and hang out on the beach in Goa but....... it's not the same!!x
PS I think Patti is playing Hebden Bridge and Leeds in September......!!

Lovely old castle, had to laught at what you husband said mine always think we have to much food.

I remember the quiet courtyard from when we visited - I also remember it was raining very hard the whole of the time we were in Skipton in fact almost the whole of the short break weekend we were there - many years ago now:)

Wherever you go, you always offer us great pictures! Thanks!
xxxx

I found Skipton Castle rather spooky! There was no-one else there when we went, and just us rattling around in those empty rooms gave me the creeps!

Though I imagine West Yorks array of Juniors would banish any feeling of spookiness!!

Liked the outside, and the walks, though. Can't do that now :(

lovely... felt I almost went there myself :-) Helen, Darcy and Bingley xx