A heavy fall of snow has thwarted my plans for today, so its going to have to be Plan B - and I don't have a plan b at this stage!
Last Saturday, hubby and I took a little trip into Sheffield to photograph Castle Market before it closes down and moves to its new home on The Moor.  Castle Market resides in a part of the city that is now very down at heel, and I believe the plans are to knock everything down around here and basically start again.  The market has the foundations of a real castle in its basement, and I think that they are going to excavate this at some point which will be interesting.  They are also planning to make it enticing to walk down to the Quayside - which is an area that would be lovely with a bit more going on around it - so we shall see. 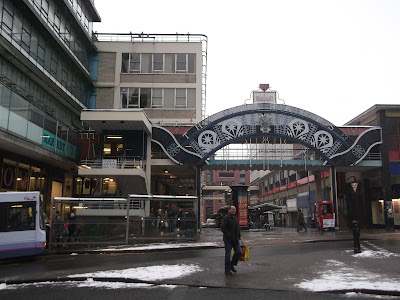 I blame people like me for the decline of markets.  My working week dictates that I am not around when markets are open, and I don't want to waste precious weekends shopping.  But I really hate supermarkets and their bully boy tactics.  A suburb near me is currently in decline because Asda owns a lot of the buildings housing smaller shops around it and has increased the rents to an extent that the current tennants cannot afford to stay.  When they become empty, Asda is opening them up as their own opticians and pharmacy etc - killing off the competition and selling us what they want to sell us, and not what we want to buy. 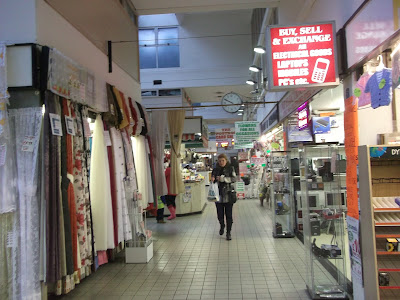 Castle Market has a fabulous atmosphere.  From the outside, it looks very scary, but inside it is spotlessly clean and full of fantastic fresh looking produce - unlike Asda whose fruit and veg looks like it has travelled the world several times and is well past its best.  The market is full of older people who can by their food in the portions that they require.  My pal at the WI who is on her own and in her 80's alerted me to the fact that around Christmas, you can't even buy meals and portions for one in Marks and Spencers.  They seem to only cater for people who are catering for many.  We also spotted lots of older gentlemen meeting up over  bacon butties and big pot of tea.  I reckon that they had all worked together in the steelworks, and this was possibly one of the highlights of their week. They were chatting and laughing and I had a tear in my eye. 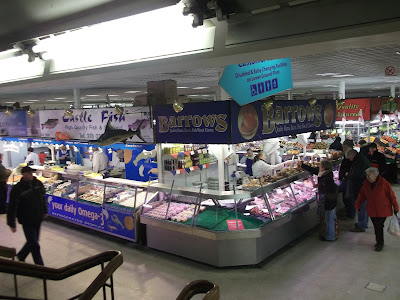 I did plan on taking lots of photographs, but I got a lot of odd looks, and I did feel slightly like a Vulture at a funeral!  I'm glad I visited, and I plan to return shortly as one of the stalls had some really interesting ingredients that I'd like to try (no, not the salmon heads!).  I really hope that the new market on the Moor is a success, and I will endeavour to use it every time I am in the city. 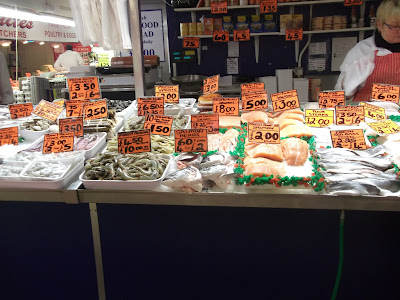 I couldn't resist a photo of old King Edward V11 in Fitzalan Square, 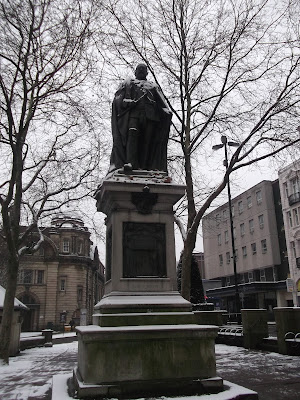 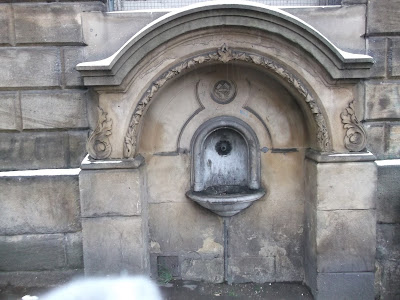 I'm sure you'll keep us updated as any new and interesting developments happen around the market area, would be very interesting if the excavation did take place.
Hope plan B works out for you.
Been thinking of you this week.
Lisa x

My Mother-in-Law used to shop in the market every week.

I used to visit the market with my Gran but as a grown up I never shopped there as it was the wrong end of the city for me.

I wish the new market well too!

I visit the market every week and love the diversity of it.I am looking forward to using the new market but I hope original traders will follow it.Love your blogg
you write about places I know and visit my self.

What a shame that this market is closing down, I hope it will be a success in its new premises and those men will continue to meet for a bacon butty and pot of tea. It reminds me of the market we used to visit weekly when we lived in Shrewsbury.
Sarah x

I love markets of any description - here and abroad. We have a small indoor market in Hereford - The Butter Market - but it too seems threatened either with closure or - possibly worse! - "re-vamping" (one of the stall holders says this means a lick of paint + putting the rents up, so that current stallholders can't afford them)

Nic B Vintage Be Beau said...

I love market shopping when I'm on holiday. Sadly there's no market in my nearest town but there's a thriving one about 7 miles away - with a great butchers. Jx

great photos!
I love popping down to the haberdashery stall in the market but it's nearly always deserted which is such a shame.
The fish market evokes fantastic childhood memories for me (even though I used to cry every time I went in apparantly!!!) my grandma used to get us a crab for our Saturday evening treat and if she really felt like pushing the boat out a bag of whelks!
Such a shame it's going as it will be the end of an era
x

I love markets like that, full ofcharacter and individual stalls and shops. We have the Grainger market in Newcastle wich is similar, but I am exactly the same and hardly go on a weekend when I have time, but I am not one of lifes great shoppers either - missed out on that gene somehow!!
BH xx

I knew that Castle Market is closing but didn't realise it was re-opening on the Moor. I'm actually much more likely to use it when it's there as it's the right end of town for me. I have shopped at the Market years ago and there were excellent fish and veg stalls but it was just too far to go. I imagine the people who currently use it and live that side of the city will feel the same way once it's on the Moor. There's a new group just formed called Friends of Sheffield Castle who are trying to get a proper excavation done on the Castle and surrounding area. It would be fascinating if it happens, there must be tons of archaeology under the Markets area. Hope you found a satisfactory Plan B:)

Love this post. I put back the veg when we did the Sainsburys shop this week and went to the market up the road the next day. Great produce and great banter from the stallholders.

Wow, cool. I'm taking notes so that way if I ever get the chance to see England, I'll know where to go :D And don't worry about the snow. I'm getting snow here too. And yesterday it was only 20 degrees outside!! Thank God for good books and blankets for snuggling!

An interesting post. We walked through that market area several time when we stayed nearby in November and I though how awful the area was! I didn't realise there was an indoor market, there were a few stalls outside which I found very off putting as there were groups of young men hanging around them, smoking and making every where stink!

We both said it needed knocking down and modernising but I hope they will rebuild the market now I've seen the indoor one and make a good job of any improvements.

I never saw the markets at their best.... That part of town was always a bit seedy, rough and a no no.....
I only ever went near walking back from Victoria quays

It's not like you not to have a plan B, Diane!:) We have a thriving little indoor market in our nearest town. It only opens three days a week but I notice the town is always busier on those days and the cafes nearby full of people chatting over coffee clutching their shopping bags - I think markets offer far more to their communities than just the shoppingxxx

Here it's snowing/raining this morning, I hope your week has started with some sunshine :)
xxxx