Hubby and I only had a very short window of opportunity to enjoy each others company today, as he arose very late from a night shift, and had to be back at work for 5pm. It was also lashing it down with rain. What to do? As you know, a bit(or a lot) of rain doesnt put us off enjoying the great outdoors, so we decided to go for a romantic amble in the rain. We live in what used to be affectionately know as the "Socialist Republic of South Yorkshire" (stomping ground of Arthur Scargill!!) We have our very own "Workers Stately Hall" - its a couple of miles from where we live and lies in the pretty village of Wortley which nestles in the foothills of the Pennines (the right side of the Pennines Gilly!). Wortley Hall was up until 1951 the home of The Earls of Wharncliffe, but like so very many sons and heirs of that time, the last Earl lost most of the family fortune gambling and drinking. The Hall was bought by the Trade Union Movement, and I think it is owned to this day by some sort of Co-operative movement, but as Unions lost power (and fee paying members) in the 1980's, they started to use it also as a hotel. Initially, it was a little bit shabby as they seemed to have moved in with the fixtures and fittings still in place. These days, its a splendid (but still in a shabby chic sort of way) place to visit or stay.

We parked our car at the top of the drive way and walked down passed the gardeners cottage and row of "laundray" cottages (now privately owned). We turned into the stables. 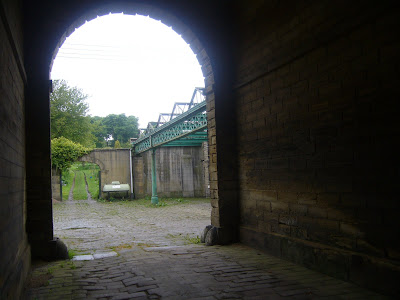 These are currently in a bit of a derelict state and awaiting repair, but they have enormous potential. 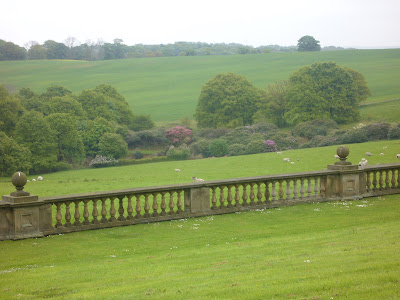 The view from the front of the hall, standing on the Ha-Ha is amazing. South Yorkshire isn't famous for being beautiful, but I hope that I am starting to change your mind. 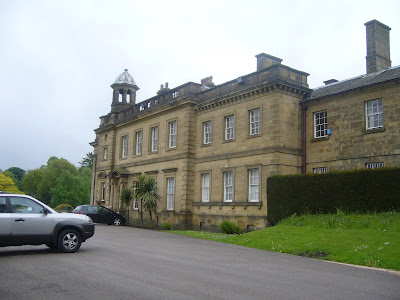 The Hotel entrance has the same view over the Ha-Ha. Look at the Palm trees Noelle - we could be in Cornwall!! 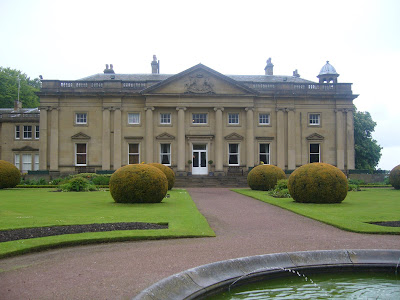 The side viwe of the hall overlooks the very well kept gardens. They employ about 4 gardeners and it shows. They do tours of the gardens some evenings and weekends, but you are allowed to wander around them for free at any time. 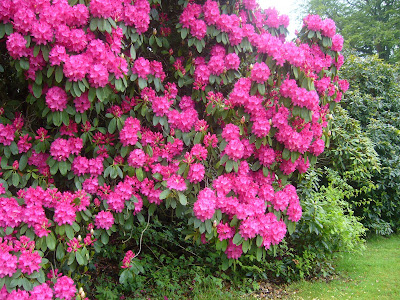 The Rhodedendrons are starting to bloom and look spectacular. 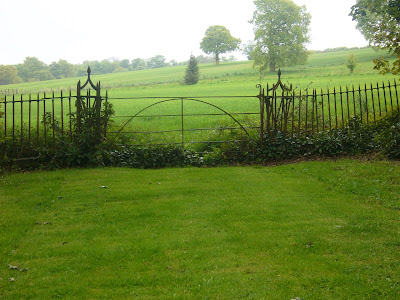 I love this little gate that overlooks the parkland. 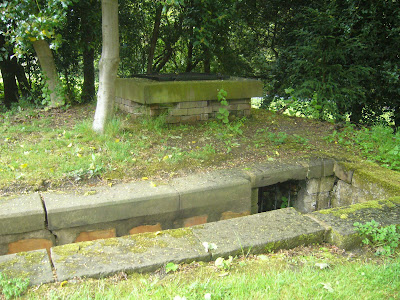 This is the entrance to the Ice House which used to get filled up in winter with ice from......... 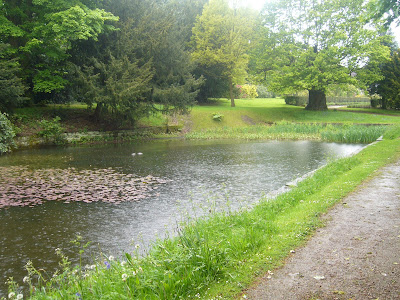 the pond - can you see the rain drops? It was bouncing it down and we were the only ones there. It was beautiful and the smell from the Azalea's was hanging very heavy in the air. 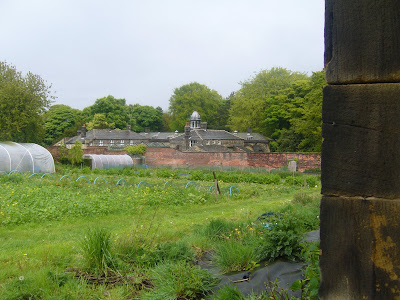 The kitchen garden is now being used by Heeley City Farm (Sheffield) Gardeners. They grow organic vegetables and herbs here to use in their cafe. I would LOVE to work here, but unfortunatley its only on a voluntary basis and with 2 kids wanting to go to university, I am still a wage slave. 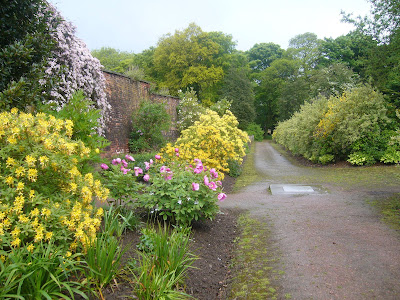 This is the "hot" border. When I went on the tour last year, the gardener said that they plant exotics in here. They never water it, so whatever they plant has to be able to survive a drought - not that they have had to put it to the test for a few years. 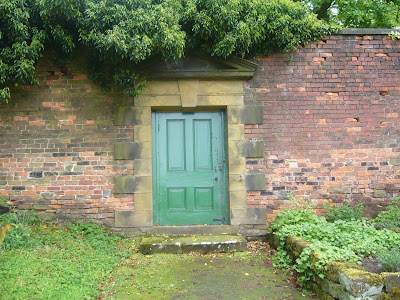 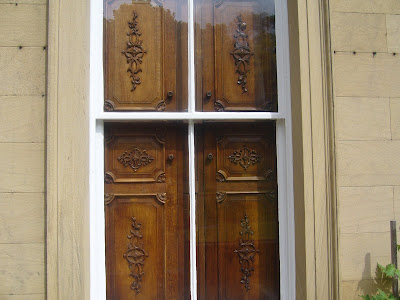 The Hall and its contents are so amazing and quirky - you won't find anywhere else in Britain like it. Its contents are so diverse. We peeped into the Breakfast Room - which they still use for guest breakfast. The room is almost exactly as it would have been when the Earls family lived in it - except it has a very exquisite vase with Trotsky's face on it on the mantlepiece!! Most of the old fittings remain - I love the shutters behind the window. 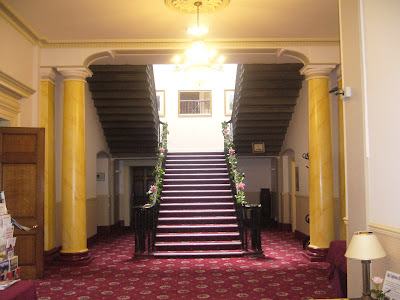 We went in for a coffee - just so that I could show you some of the interior. This is the staircase in the hall. They were hosting a wedding today and some Bridezilla has had the staircase festooned with flowers - totally unneccesary in my opinion. 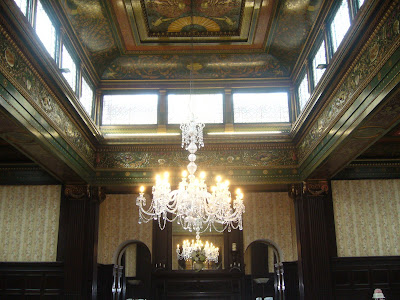 The wedding reception was going to be held in the grand dining room - it looked really pretty. The most amazing feature in this room is the ceiling which is really ornate. You can't really tell from this photograph, but if you double click to enlarge it, you can see more of the detail. 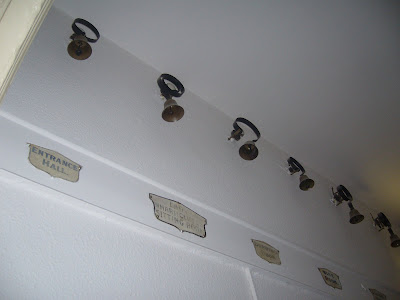 I told you that they had left most of the features in place - here are the bells that used to summons the servants. I am watching (and totally enjoying)the re runs of Upstairs Downstairs on saturday mornings, and I couldnt help thinking about the servants having to scurry up to the rooms when these bells rang.
If you find yourself having to/needing to/wanting to come and stay in South Yorkshire for any reason, I insist that you don't stay at a hotel owned by a chain, but stay here at Wortley Hall for a totally unique experience. They have some old fashioned chintsy bedrooms, some modern boutiquey ones and a couple of holiday cottages near the stables - all really nice (Ive done a tour of these too!!). They also do a belting Sunday Lunch. You don't have to be a resident to enjoy this, and you don't have to book - they just keep fitting folk in - all very Yorkshire hospitality and great value for money as you would expect.

I really enjoyed my rainy date with my fella under my umberella - and apart from the cuppa (which was purely for blogging purposes) it was totally free!!

Ooh lovely pictures, that door in the wall looks fascinating. They always remind me of The Secret Garden.

The estate agency I work at sold an old untouched house a couple of years ago and it was HUGE and still had the servants' bells, I soooo wanted to buy it myself but unfortunately didn't have half a mill to spare ;)

ooh, gotgeous! even looks good with nthe rain bouncing down - then again I am inside with a 'dry' GnT haha! Rain was awful today here, one minute sunny and out goes the washing, then lashing down and olympic sprint to the garden to get it all back again!
Better tomorrow though - fingers crossed!!
BH x

I read your hilarious comments on Maels' blog and had to stop by to read more of you. I'm glad I did. Lovely photos. I wish I didn't live on the other side of the world... a little harder to just pop by Wortley Hall.

Thanks for the visit!

Thank you for the 'grand' tour a truly wonderful place.

Enjoy the rest of your weekend,

ps. thank you for the earl grey and sparkling water tip - I will try that next time though hopefully there won't be one (she says) I doubt that is never going to happen - right!?!

Lovely walk! And a beautiful place. (Pity its the wrong side of the Pennines!) And I'd have added that door to my collection of "What is in there/through there/up there!)

And thanks for the slug tips. Sounds fairly humane to me!

Another cracker of a place to visit.
I agree that green door in the wall looks so inviting and I would love to have been part of the smart set and flounced down that staircase for cocktails in the drawing room.
What a lovely place to be with your loved one.
Lisa x

You do have some wonderful places nearby to walk in - another place with lots of interesting history to it. The hotel looks wonderful - love the green door and of course want to know what is behind it:)

What a lovely tour! thankyou! x

helloeee, great photos Diane. Have you ever seen the famous green door in St.Ives! It even has its own flickr group, go check it out...http://www.flickr.com/groups/98742414@N00/

You take the loveliest pictures! Who says South Yorkshire is not beautiful...
Loved the tour of Wortley Hall. Really love your little adventures.

In answer to your question on my blog, Dordrecht is not too far from here, nothing ever is in this country. It is probably about an hour away.

not sure whats behind the St Ives door even hubby doesnt know and he was born here. I think we need to go and knock on it ! Chris reckons that its someones house and its probably blocked off the other side. I always think its a bit spooky!! xx

hahaha! oh, erm sorry I do seem to have left a comment containing one or two errors!! Copy away - would love to see pics!
And thanks for the kind offer of the eggcups - will drop you an email!
BH x

Hi Diane, that looks like a wonderful way to spend an afternoon. The grand houses in the UK amaze me. We do not have many which could compare in Australia so I am always dragging the kids around them for a sticky-beak whenever I get a chance. They are now so indoctrinated by this they actually ask a lot of questions and enjoy the experience, most of the time.

I had to come back & look at the photo's again Diane...
you'll have to give Baz a few tips now he's got his new "toy" camera. what a lovely house! I have to put it on my list ;0)