This coming Sunday is being dubbed "Survival Sunday" by Radio Sheffield as Sheffield Wednesday (the boys team) have to play their hearts out to avoid relegation. Hubby and the young man paced around a bit last night as they listened to a match where if Crystal Palace (I think it was Crystal Palace, I am a bad wife and only half listen!!!!) had won, then Wednesday would have been out - they drew 1-1. So, it all rests with the team themselves as they play on Sunday. Its going to ne a nail biter! 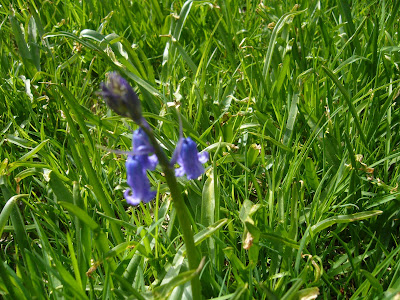 Talking of the blues - I spotted some of my favourite "blues" making their first appearence of the year - and I heard my first cuckoo too. 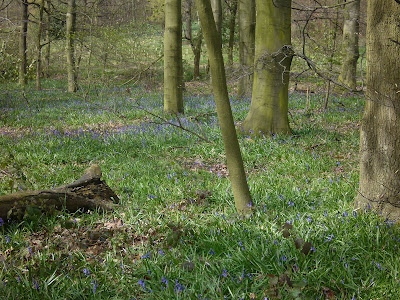 Wow! What fabulous freebies! ..I wonder why we have to plant them in our garden... xxxxx

Bluebells just beginning in Eccleshall Woods but no cuckoo yet! We were rooting for West Brom last night and hoping that Wednesday make it this weekend.

I love to see a Bluebell Wood.
The one at Rufford Abbey (Notts) is quite impressive too.

I love bluebells - something very special about them.

Such a pretty woodland photo. A lovely blog too. I'll pop back again soon! Ros

I love your Bluebells. I'll tell you a story about bluebells. Once upon a time MandyCharlie moved into a new to her house and noticed that Bluebells grew under the hedge. She carefully cultivated the Bluebells because she loved them so.Some years later and the Bluebells were just wonderful Mother who was only meant to be feeding the cats whilst MandyCharlie and her hubby and offspring were on holiday decided to CLEAR the rubbish under the hedge and dug up nearly every single bulb, it was a bucket full. She left them in the bucket, it rained the bulbs drowned, that was the end of the Bluebells. Did I tell you about the matching Budlea's either side of the drive. They were 12 inches high when I got home, I wept.

Ooh the pressure. I'd rather watch the bluebells though! Looking forward to getting out into the country this weekend, hopefully see a carpet of the blues myself.

I spotted some bluebells today too! sooo pretty they are, love them.
I am off to scour for a fire pit - Im sold on the idea of a warmer doofer already!

I love your bluebell photos! They are so pretty! I can't get in to football at all but the rest of my family love it.... they are united fans too so they want to see Wednesday go dowwwwn :p

The bluebells were just emerging at Doddington Hall Notts, last Sunday. You can't beat that amazing colour when they are fully out in their natural habitat can you. We think we heard the cuckoo too but not sure. They are not heard as much now as they used to be thats a fact!

I'm a bit worried about you if you think of me first thing in the morning! The chair is nearly finished.
We have had a tense couple of weeks wandering if Saints were going to make the play offs. Football is takne very seriously here too!
Lisa x

You heard a cuckoo? You were very lucky, they are endangered now! I don't know whether they are on the Red list (very bad) or the Amber list (bad) but they are not doing at all well over here.

Lovely bluebells - ours weren't quite out earlier in the week. Must get out and have a snoop round this weekend!

thank you for the St Ives link, me and Joshy have just looked and wished we were there, if I ever win the lottery I'll buy a great big house there and never leave! We can't go this year for various reasons so have withdrawal symptoms! fliss xx

Hi Diane, not at all a football fan, in fact anything to do with balls, well almost!!!! ooh how rude! Anyway, on cornwall cam on the third photo if you look closely, i'm standing in the shop, just inside the door on the left, nooooo just kiddin!!!! I was down there actually but in Fore Street. Great pictures we've had some fab weather, wish you were here!!!!!! x x x x

Lovely photos as always! It’s a great to back and be able to catch up with what you’ve been up to!! x

your post has inspired me to get out into my favourite spots in Oxfordshire and bluebell spot! Thanks. Lovely post. Helen

I love watching for the bluebells....such a magical carpet when they are all in bloom, xv.

you did make me giggle as I read your little message on your profile, ......you are an office clerk!
I love a bluebell wood and your picture is lovely, funny how an old stump just adds that extra thing!
Bluebells, I loved to pick them as a child but sadly they do droop a bit.
Cx

Aren't the bluebells cheering? We saw quite a few blooming on our travels - carpets of blue under the trees. It' a few years since I heard a cuckoo - I'd hear them when we visited Mum and Dad in their village - the only cuckoo I hear now is next door's clock on the hour if I'm in the garden and their window is open:)

I noticed a faint blue tinged covering in the woods by our house as we drove past the other day - its such a pretty sight isnt it?!

I'll keep my fingers crossed for sunday, was a while since I last went to the Wednesday games but even though I don't follow them now I still have to root for them when the going gets tough!