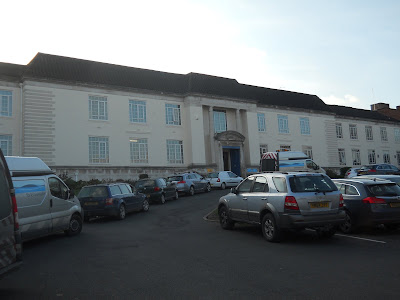 I told you a story recently about when I was very much younger and worked in a proper office. I drove past it recently and thought I would take a photo to show you how magnificent it was. It is known locally as "The White House" and is currently occupied by Yorkshire Water. It started out life as the offices for a great local company "Messrs Newton and Chambers". Newton Chambers were a steel producing and heavy engineering company. They made bridges, dams and other wonderful structures that ended up all over the world. The Thames Barrier was one of the last structures that they made, and they also made most of Tower Bridge too. One of the side products of heating coal up to make steel, produced a disinfectant that Newton Chambers manufactured as a sideline - they called this "Izal" - an anagram of one of theirs daughters names - Liza. When I worked there, it was for a large American company who had bought out the disinfectants side and all its related products (you know which one I mean, and can I just say Buckingham Palace used to order it!!) of the company, but the steel production and engineering site was still very much in full production. I witnessed its swift and heartbreaking decline (at the hands of Margaret Thatcher)from my office window - in fact I did once witness Margaret Thatcher outside of my office window.
I was 18years old when I started work here, and I learned all about life from the remarkable ladies that I worked with. Ours was a fairly young (accounts) office, and the "typing pool" were all young too, but the rest of the 250+ ladies were ancient! (to me then) aged about 40-50 years and most had worked there all of their lives.
Joan was an exception. I remember Joan starting after me. Her husband had been kicked out of the army as he had reached 50 years old - he had been in all his life and Joan had stoically packed up home and 2 children and followed him wherever he went - even 3 stints in Belfast when it was at its worst. Her husband struggled fitting into "civi street" - even though he got a job and they had a nice home. He drank a lot and caused the family many problems. I remember one week in the life of Joan. She came to work distraught as her 18 year old son had announced that his girlfriend was pregnant. Then on the Wednesday, Joan was as proud as punch when the same son won "Apprentice of the Year" (at Newton Chambers) awarded to him by Maggie Thatcher (that's why she was outside my window). Then on the Friday, she was devastated once more when Newton Chambers announced redundancies - and Joan's son, and husband were on the list.
I remember realising then that life could be extremely tough.
I used to see Joan until recently in Asda. Her husband died of an alcohol related illness and even though he had made her later life a nightmare, she only spoke about him with great fondness. Her son moved abroad (like most of the extremely talented young engineers from Newton Chambers did) and her grandson - who's conception she was so distraught about - is now a successful journalist living in Hong Kong. So some things do come out alright in the wash!
This photo is from a book I found showing how it had looked in the 1930's with all the "reps" cars. It never really changed much - just got extended a bit. 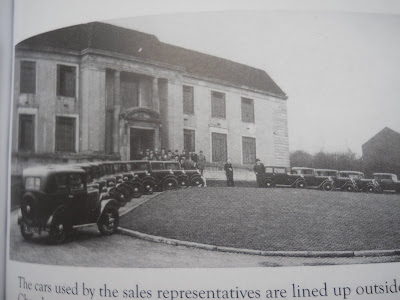 When I was there, the reps cars were all Ford Cortina's!
Some jobs just don't exist anymore. The prettiest girls worked in the Typing Pool, and always got chatted up in the pub on Friday lunchtime by the boys from "Outside Erection" at Newton Chambers (They used to have a plaque on the door with this title on it!). The"Comptometer Operator" who checked all our accounts figures (and always had RSI before anybody had ever heard of it!) is no more. The two "Telex" ladies were a sitcom in their own right! One, an elderly methodist chapel going"Miss" and the other 4 times married with a current husband half her age, rumoured to be a bit of a "goer"! (The salesmen hoisted a pair of her knickers up the flagpole on the day she retired!!). The "Gestetner" machine was one of my favourite bits of office machinery - a kind of photocopier producing cheap copies - using methylated spirit!
We worked very hard, but large offices in the 1980's were great places to work.
Sitting staring at a computer all day just isn't the same.
Posted by Diane at Friday, March 04, 2011

Lol, that is a great story .

Fab story - I started work as a typist/secretary at NatWest on the Cliffe. Used a manual typewriter and a Gestetner machine too. It used to smell awful. Statements were typed and cheque books printed on the premises with a massive machine which thumped out the books, the pages of the cq book had to be turned manually and it was scary. We also had a strange photocopier where you had to do several processes to get one image. Sounds like the 1920's erm it was 1982. Lol. Those good old days,

That is a grand looking building.

I used to work somewhere that looked similar - had been the offices of a huge engineerig company that our town was built around.

Now most of it has been converted into flats and they've spoilt the view of the parklane buy building a carpark :(

Diane did you know there is a craft fair in Southwell Minster on Saturday. If you haven't been before its stunning and the village is where Nellie in the Shed is plus tiny wool shop, two charity shops plus other independent shops. Thought you might like it. Reg Taylor's garden centre not far away and do 'proper' afternoon tea for about £12 for 2. Might see you there. Debs X

What a great post. Love that photo from the 30's. I am so glad that the imposing entrance is still there and restored. Take care. Diane xx

In my days with the GPO I remember visits to the switchboard, there was a good canteen too - that bit I do remember - whatever happened to the NewtonChamber tank that was for many years positioned on a mound of earth next to the main road ?

What a grand building. I bet you could tell a few more tales from your 'proper' office days. I also worked in an accounts office in the 80s and 90s.

I love all your stories of the past, and bits of history too.

Trouble is, it doesn't seem so very long ago to me!!

Couldn't exactly tell you why but I really liked this post.

Hi Diane , such an interesting post , history , human interest and funny bits . I love reading your posts.
My Mum encouaged me into Nursing (not the QARNS ,though I remember that advert in Jackie) and you certainly saw life ....not sure I could write about it in such an interesting way, it's a real gift.
Jacquie x

What a wonderful story about your work place and about the lady called Joan and all she struggled through. Gosh the social upheaval of those times MT has a lot to answer for as she broke up so many communities and families suffered so much. I remember my fist job was in an accounts office - we had a huge big adding machine which took up a corner of the office and a telephone exchange with a wooden box, a winding handle on one side and numbered 'balls' that dropped down into slots when you put calls through - we used to call them 'eyeballs' - I used to go for typing lessons after work it cost me 4 shillings an hour - the lady who taught me was a retired legal secretary and she was a lovely person:)

Great story - wonderful building! Grrr to MT!! Love the idea of the knickers up the flagpole! Enjoy your weekend, Abby x

I love the old photo, what a pretty place to work in. I have all my RSAs, typing fast comes in dead handy!

I go to the Parkgate TK Maxx, been into Sheffield one a couple of times as it's bigger!

Lovely trip down memory lane.
Gestetners, I remember those too, I think they'd be banned as hazardous today!
Carol xx

I feel happy, proud and sad for Joan all at the same time. Bless her.
Loved this post Diane.
XX

Lovely post-found it very interesting ,sad and funny too all mixed in together !

Its so nice to peek into other people's lives- thank you for sharing your tales of the office! It sounds like a fantastic place to work, and obviously holds some fond memories. So sad that it is no more. Hope Joan is happy in herself nowadays (you know what I mean...) too.
I always wanted a grown-up job in a big team and a posh building. I'm still working on it! x

A riveting slice of history and your life. Keep them coming.

I bet there was never a dull day at that office. How many jokes came about because of that sign?!
Poor Liza, having a disinfectant named after her!
Lisa x

Wonderful story... it is amazing the absence of change in the two photos.

Have a great weekend,
Genie

Loved that post, it really took me back to my job in a typing pool in the 60s. No computers then, you really had to be able to type accurately and produce several carbon copies. It is appalling that we now pay professionals an exhorbitant hourly rate to stab at a computer keyboard when a proper typist could do the job in half the time for a quarter of the salary.

What a great story - thank you for sharing!

Thanks for this real people piece of history Diane. I even read it out to my husband.