After weeks and weeks of blue skies and "summer " weather, when Rosie, Rowan and I decided to meet up for a bloggy blind date, we thought that a picnic would start the date off well. When I watched the weather forecast yesterday, and the weather girl explained that a Spanish Plume was on its way, we knew it could go either way. I do have photos of us all picnicking under umbrellas - but I thought it too cruel to post these! (although I think Rosie's husband Paul might not be as kind - we shall have to wait and see!)

Anyhow, after our soggy lunch, we made our way to Haddon Hall in Derbyshire. Rosie had tipped us off that they were hosting a Tudor Cookery weekend. Here we are all looking very bedraggled! 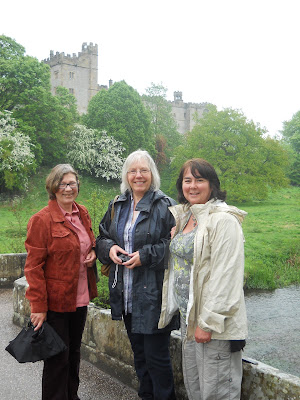 Haddon Hall is beautiful. Its a proper little jewel and like its neighbour Chatsworth, it is still lived in by the family - Lord and Lady Manners. 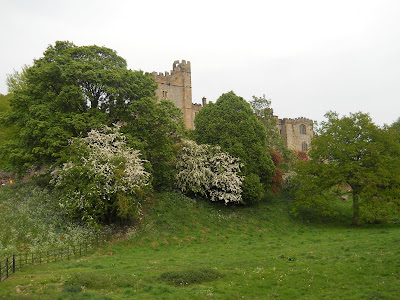 One of its wonderful features is its pretty courtyard. 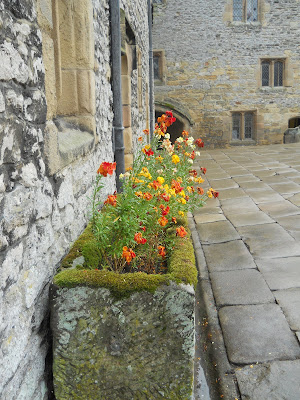 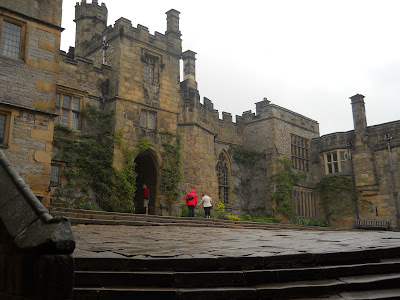 One of the cottages by the hall has some fabulous topiary. 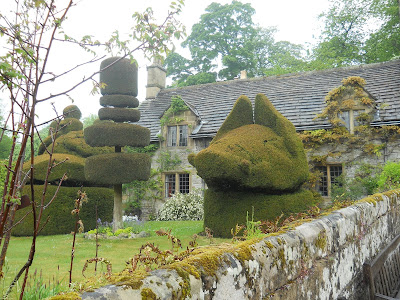 The Tudor cookery day was fabulous. They had Tudor workers throughout the house and it really brought the house to life - so much better than walking around empty rooms. 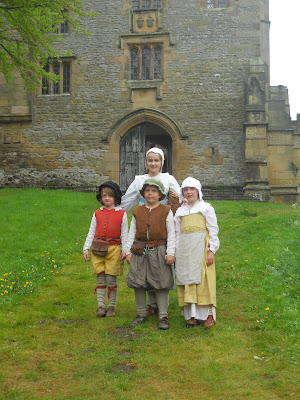 The courtyard was full of herbs. These were picked for use in the kitchen. 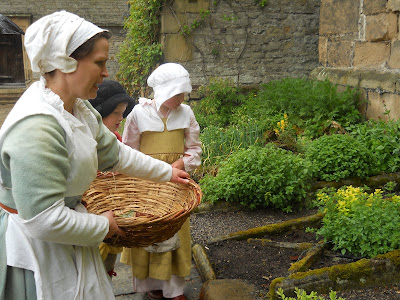 The actors were very knowledgeable and held Rosie, Rowan and I spellbound with their conversations and explanations of what they were cooking and using for cleaning etc. 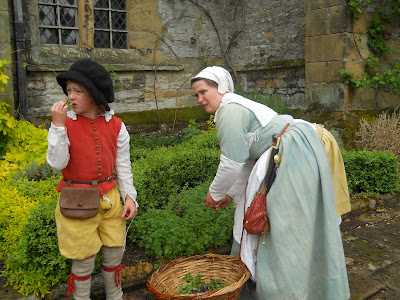 Do you recognise one of the staff? (This one's for you Clare!). Ruth Goodman from the Victorian and Edwardian Farm series was acting as the kitchen steward, overseeing the staff and checking that none of the expensive ingredients and spices etc were being stolen. She told us how all the food had to be accounted for - it was checked out of the kitchen, and then checked that it had made it to the dining hall too! 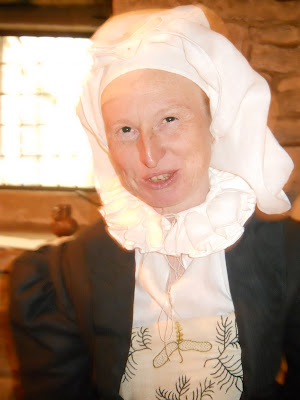 We watched all the food being prepared. 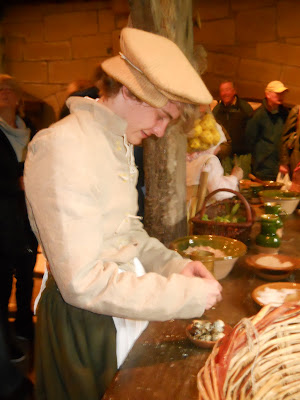 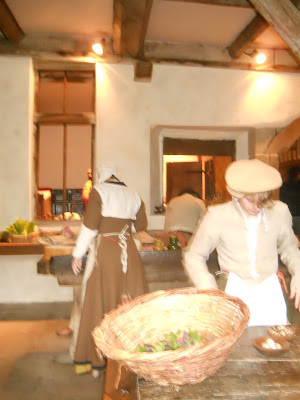 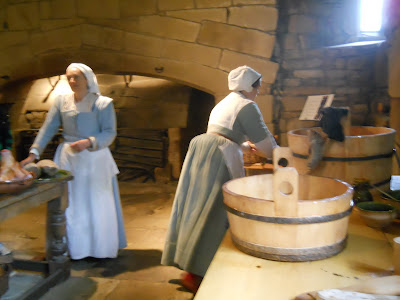 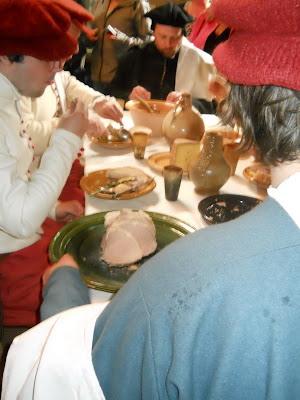 And then we watched the servants furnishing the table with the food. As a sign of reverence and respect to the lord and lady, the bowed every time they approached the table - even though the lord and lady were not even in the room!! 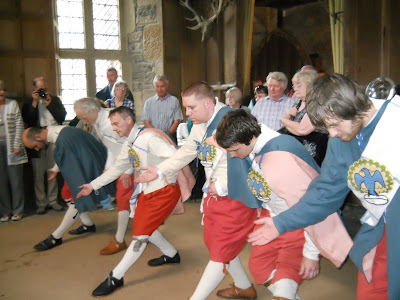 And then finally, the lord, lady and their guests were called and seated for their extremely extravagant meal. 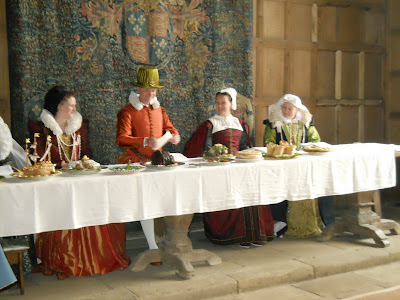 I learned so much - it was fantastic and all included in the normal admission fee. It was fabulous to share the day with Rosie, Rowan and Paul - Thank you ladies and Paul, you were all such great company.

I'll show you some more of the hall and gardens later.
Posted by Diane at Saturday, May 07, 2011

How fab was that?!

What a lovely idea, so glad you had a good day, despite Derbyshire living up to its damp name!

What a great way of learning, I would love to have seen that! Even more impressive is the fact it won't be long before you know everyone in Blogland!!

Sounds like a fantastic day!
It seems very strange that the staff were fed first. Wasn't the food cold by the time the Lord and Lady got their's?

Wow! That looks like so much fun! I love visitng places that help history come alive. Great pictures. Thanks for sharing your adventure with us. :)

I bet no=one would dare put a foot out of line with Ruth around!
Looks like it was a really interesting day out with more blends!
Lisa x

You do have great days out! That looks like it would have been really interesting and enjoyable, despite the weather.

How wonderful you got to me Rosie!
Sorry to hear that the weather has not been kind to you, anyway it looks like you had a great time together!!!
..when are you coming to Venice??? :)
xxxxx

It was a great day wasn't it? Maybe next time we'll get sunshine:)

I my word. I will HAVE to visit there. What a wonderful place. I think you may have to post a little guide book to all the great places you have been to.

Rain or not we have some fascinating historical buildings in this country. Love the topiary.

I'm still looking bedraggled this morning!! Wasn't it a great day? It was wonderful to meet you and Rowan - your photos are wonderful. I'll try to do a post later today about our Tudor adventure:)

Oh lucky you, I love Ruth, we have the Edwardian Farm on TV at the moment. Pity about the rain, but it seems you all had a great time.

Looks a great day for you all!

It looks fantastic Diane. Pity you couldn't join the tudors with their meal undercover rather than eating your picnic in the rain!!! x

sad about the rain but it must be fun meeting up with bloggers. The tour through the hall must have been the best experience. It looks so authentic. I would love to see that.

Looks like a fantastic day. You're so lucky to live near so many great houses. Still no rain here yet.

What a fun day out and a brilliant way to learn something new !

That looks brilliant fun.
I love the courtyard photo with the tub of orange flowers.

What a shame about the weather, but it looks like you had a wonderful time all the same. I love the topiary, very impressive.

It looks like you had a lovely day out despite the weather.

How fantastic- to meet up with fellow bloggers, and have such an interesting visit.