Birmingham Back to Backs

Yesterday, we found ourselves in Birmingham where we had decided to follow our team - The Sheffield Sharks basketball team - who were in the NBA finals (sadly they didn't win). Hubby decided to surprise me by booking us a tour of the National Trust Back to Back houses - somewhere I have been banging on about wanting to visit ever since they opened them. 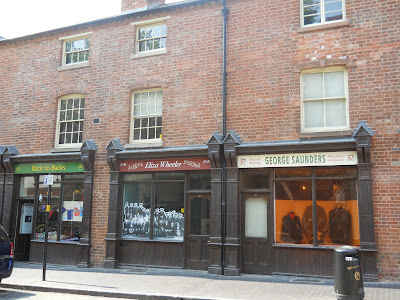 The tour of the Back to Back houses - the last remaining courtyard of these in Birmingham starts outside the sweet shop on the corner. 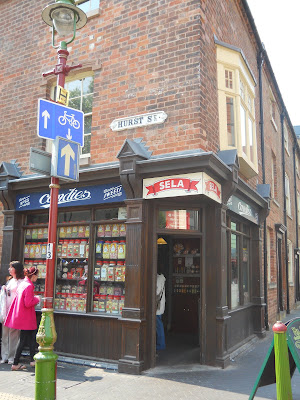 Which used to be your favourite? 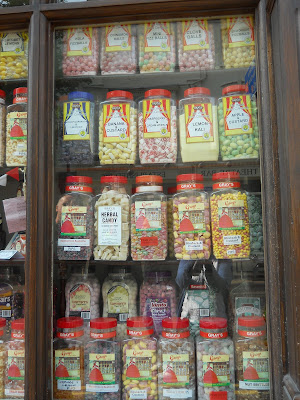 Lemon Kali was one of mine. 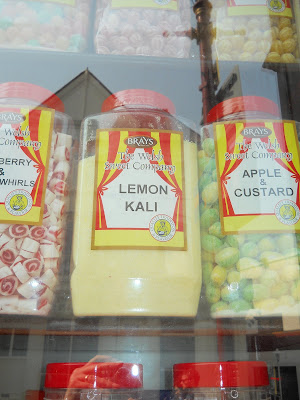 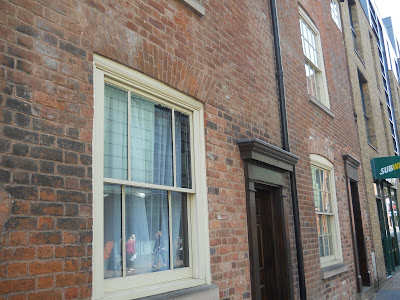 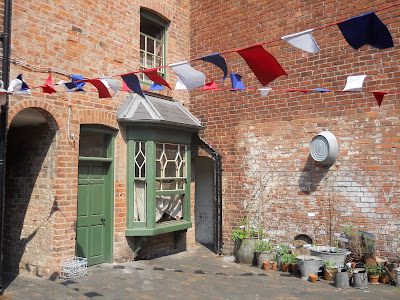 A lot of research has gone into the families that would have lived in these houses through time and the guide tells story's about them. The houses have one small room on each of the three floors. One of the families had 10 children and 2 lodgers making a total of 14 people in one tiny house. 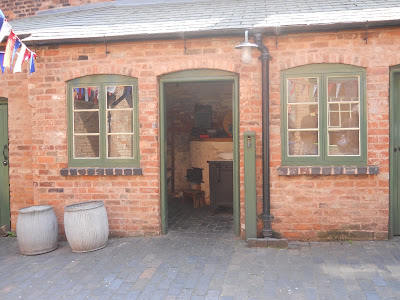 The washroom outside was shared by 12 families and each woman would have her allotted time to do her washing. Once she had finished, she would often jump into the tub to have her bath, then use the water to bathe the rest of the family. It was often like sludge when they bathed the last child - usually the baby. 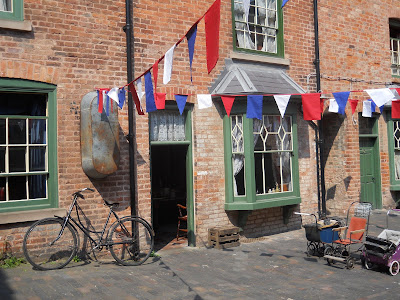 They had 3 privies to share between the families and these would have originally been "earth closets" - basically a hole where you deposited your waste, which got mixed with ash, then when they were pretty full, they would be shovelled out into the yard to await the "night soil man" who would collect it on a cart and sell it for fertilizer to the farmers. (Hope you were not eating!!).
The yard and houses look really pretty decked out with bunting for their WW2 week next week, but they would really have been vile, smelly places to live. 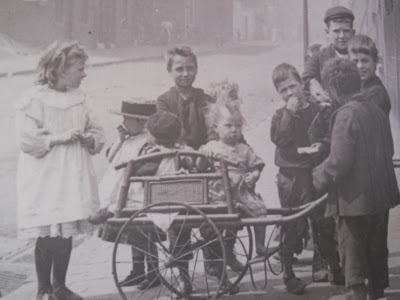 Its amazing to think that people still lived in them up until the mid 1960's. 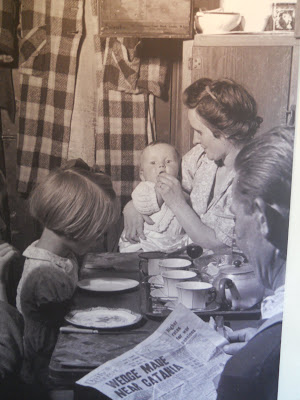 I wondered what these women who lived in these houses who struggled on a daily basis to feed and keep a family warm would make of the fact that even though we now have a limitless choice of floor covering and bed linens available to us to buy, we still love the rag rugs and patchwork that they were forced to make for comfort. I think they would think that we were mad. 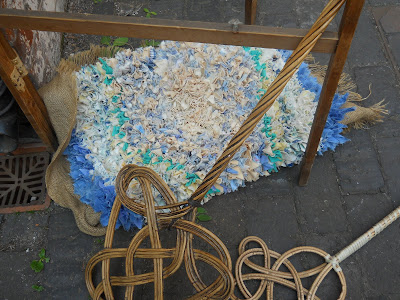 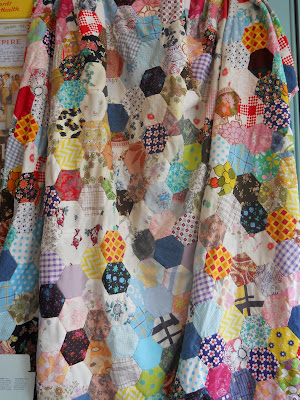 If you ever find yourself in Birmingham with time to spare, I would highly recommend a visit - but you do usually have to book in advance.
Posted by Diane at Sunday, May 01, 2011

This is on my list of places to visit - spending so many weekends in Wolverhampton, it's a twenty minute train journey to Birmingham, but I never go there because I hate it! One day, I am going to visit the back to backs and a few other places I have on my list there! One day!

We were lucky to be able to visit the Back to Backs a few years ago not long after they opened and I was fascinated with them not least because some of my ancestors lived in a courtyard in that area of Birmingham according to the 1851 census and they were gun part makers, nailmakers and ferrule makers. Have you been watching 'If Walls could Talk?' last night it was the history of the bedroom and some of it was filmed at the back to backs. Glad you enjoyed your visit - did you buy some sweets from the shop?

We don't know how lucky we are, do we.

Fascinating post Diane. I love the history of these places and will add this to my 'to visit' list.

What an interesting post, it is amazing how people used to cope under those conditions. I also used to hate history at school but I am now fascinated by it!! Diane

I dont know if you saw Lucy Worsley's programme last night, but she showed us one of the back to back houses, and described how they lived. Unimaginable now. She interviewed a lady who had lived in one until she left home to get married.

Shame about the basketball result but how thoughtful of Mr H to book you into a tour, he' sa diamond!
I've been enjoying the If Walls Could Talk series and these houses have featured on there a couple of times. They look fascinating.
Lisa x

That sounds a fascinating place to visit. It is hard to believe the conditions that some people had to endure.

Fascinating. I too saw these on If Walls Could Talk, which I am loving, the other night. x

It looks like a fascinating place to visit Diane. I have never heard of lemon kali but it looks like what we used to call lemonade powder down in London. x

Great post - very interesting! Love these kind of places - they give you a real feel for what conditions were like.
Liz

Looks a great place to visit perhaps similar to Beamish ?

What an interesting place to visit.
I wondered how kali was spelt and now I know. We used to have the rainbow kind and I liked the fact that it made your tongue bleed if you had enough of it!

How interesting, it is somewhere I would love to see along with Mr Straws House in Worksop. have you been there? Lizzie

Hi Diane that's on my list to visit - I too like social history and find it fascinating and like you didn't care much for history at school. Have you been to Mr Straw's House in Worksop - may be we could go together on our bloggy meet up. You do have to book though but it is fab. I used to get Kali from the corner shop near my Grandmas in twisty little triangle shaped bags.

I ought to be ashamed considering I find myself in Birmingham every working day and have not yet been to the back to backs - I would love to go though! Have you heard of the Black Country Museum at Dudley (west of Birmingham) - that's a whole village in similar style, with houses, shops, a church, a pub and even a fish & chip shop ..... which are to die for. And you probably would do (die that is) if you ate too many, as they're cooked in animal fat, but it's that that makes them so delicious - once in a blue moon doesn't hurt!! I digress though - I'm sure you would love the Black Country Museum if you've never been to it.

Very interesting. Life must have been so hard. You always seem to find interesting places to visit.

Oh this looks fascinating- thank you for 'showing' us. Its so easy to lose sight of other peoples struggles. Quite sobering.

Actually, apart from no through ventilation, the houses were usually in good nick. They were by no means all included in slum clearance, but I do wonder if there are any left?

Gosh, when I was last there it was on a press trip and it was all still a semi-demoltion site. We met the last family to live there, a man and his two grown up daughters. It all looks lovely now. I have to go back.

Can not imagine how i would cope with out a proper bathroom instead of these washrooms.