My daughter had to work today poor thing, so we had to get up early to take her. We had decided to go for a walk just over the border in Derbyshire. We are so very lucky to live this close to the Chatsworth Estate, and because of our early start, we got there before the bank holiday hoards. The trees in the woods are currently displaying every conceivable shade of green. 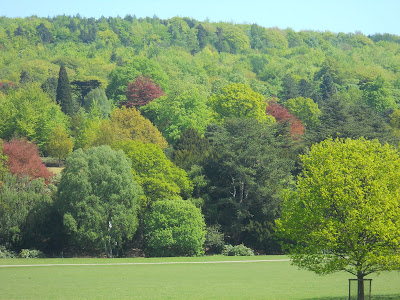 No matter how many people turn up to look around Chatsworth, there is always enough places to park, and more than enough room for everyone. The house, park lands, gardens and estate are enormous. 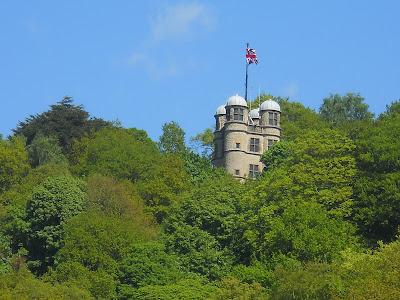 I felt so sorry for 2 ladies that had made a long trip from Essex to see the house - from the outside it is currently wrapped up like a huge parcel whilst the stone work is being restored. I feared that this would not be there only disappointment though as they were on the trail of Mr Darcy - they had an obsession with Pride and Prejudice. Ive been here many times and never managed to see Mr Darcy. The ladies had not done their research very well, and mentioned that they couldn't believe that people used to live in houses this big. I told them that it was still lived in today by the family, and they couldn't believe it. Hubby and I toyed with teasing them - we were going to tell them that we all lived in houses like this in the north! 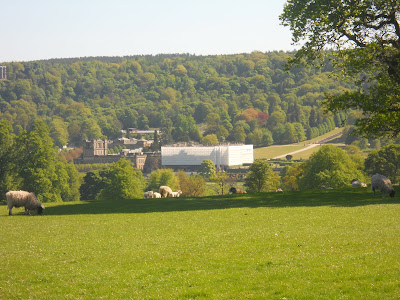 We wandered across to the Estate village of Edensor. 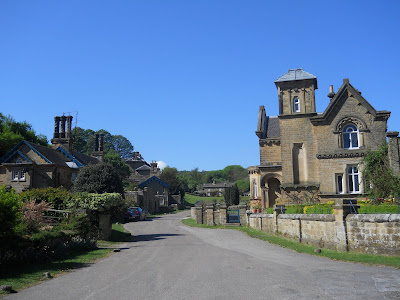 Its a perfect little place. The churchyard has a couple of famous people buried in it. 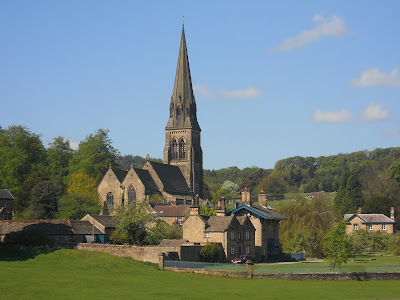 The first one is Joseph Paxton and his family. Joseph was head gardener at Chatsworth for a while and created the fabulous gardens that we see today. He also designed the Crystal Palace in London. 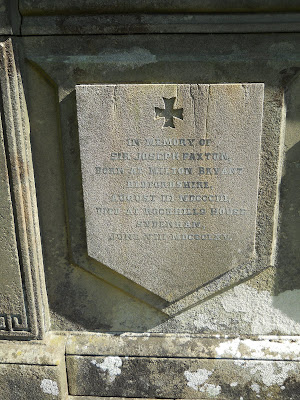 This grave was so difficult to photograph because of the sunlight and also the shade of a large tree, but it is the grave of Kathleen (Kick) Kennedy - sister of JF Kennedy. She was married to one of the Dukes of Devonshire but died in an aircraft accident whilst cavorting with one of my neighbours - Peter Earl Fitzwilliams of Wentworth. The plaque on the ground mentions JF Kennedy visiting here in 1963. 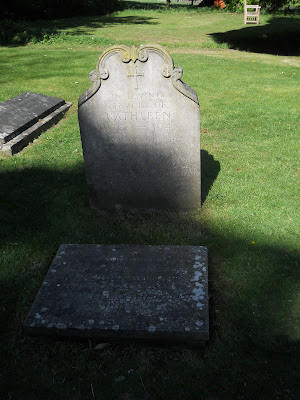 We happened upon these guys - we called it a stag party! 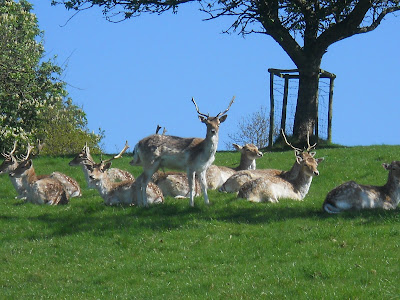 It was really sunny but fairly cool in the strong breeze whilst walking in the park. By the time we got back to the car after a long walk, it had gotten very busy. 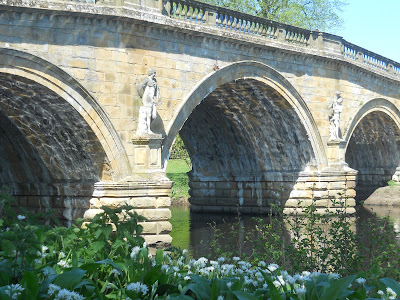 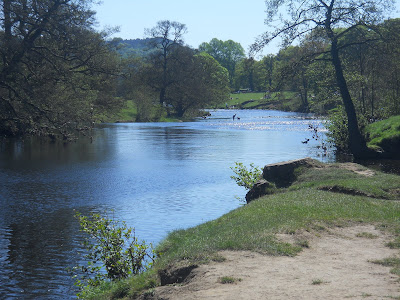 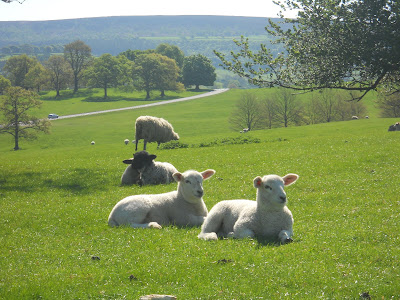 I managed to come home with a great freebie. One of the residents in a cottage near the plantation had dug up lots of Victorian bottles near her garden and had left them by her gate for passers by to take. She told me to take as many as I liked, but hubby would only let me bring these few as he knew he would end up carrying them. I'm cleaning them up and they will be displayed in my kitchen. The little white vessel says it is made in the "republic of Ireland" and one of the bottles says "Derby" on it. Great freebies. 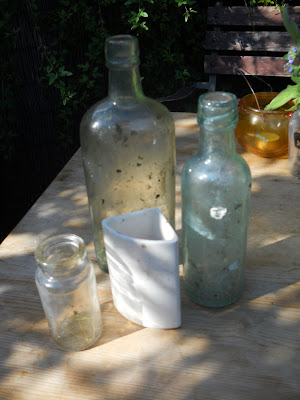 What am amazing day out. Love your photos especially the stag party. Diane

What a lovely day out, I love your freebies, they should clean up very nice. What a shame for the two Essex ladies, though I don't think they'd have believed everyone up North lived in houses like that.

Lovely photos - all those greens are stunning in the first photo! I love walking up in the woods around Chatsworth, but haven't been for a while.

We haven't been out anywhere this weekend because it's too windy. I'll walk in most weathers, but I absolutely hate wind!

I've only been there once. What a lovely place it is.
I have a feeling that a rather special couple spent the weekend there, did you spot them?!

Lovely pics and great freebies, can't wait to see them all cleaned up!
Clare
x

How lovely to get out into the Derbyshire countryside - those trees look wonderful. Looks like you had a great day and a lovely walk - love your photos especially the stag party. The bottles will look great on display in your kitchen:)

one of my favourite places on earth!!!
belive me!

Lovely photographs-its a great time of year for trees-love the different hues, foliage everywhere is so lush!
Well spotted-your freebies would look great as vases grouped together,fantastic chimneys in that little village x

Not temped to get hubby to emerge out of the river aka Mr Darcy then???

Did I ever tell you I worked there for a summer? On the ice cream hut, yum!!

Oh, Diane, lucky, lucky you on the find of the bottles! I have a small collection and love them...putting single buds in several grouped on my mantel. Now, I think you should have just given the ladies a good "story", for after all, they came for an adventure and would probably never know the difference! hehehe

Your photos show a beautiful summer's day in England to perfection.
If anyone is going to get a freebie from a day out then it's got to be you!
Lisa x

In my rambles around the country I have yet to walk in Derbyshire though it is on my list, so it was great to read this post full of information. I must admit it would be lovely to see Mr Darcy wandering about the estate!! And those bottles are beautiful, I collect bottles of that sort myself and would have been delighted as were to see the freebies!

Those pictures are so lovely, they are so beautiful and it makes me want to visit England that much more, hopefully some day I might get the chance, and if it were possible, I swear I'd live in England, maybe London, it seems so culturally interesting

Lovely to visit again through your photos. It's such a beautiful park.