Some feelings never leave you.

On Sunday, we had been instructed by the young man to meet on a local playing field - with a picnic - to meet others for an impromptu mass rounders game. It was something that his circle of friends had decided to do and invite their families. All in all over 70 people turned up. 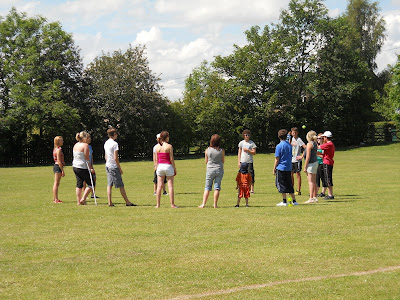 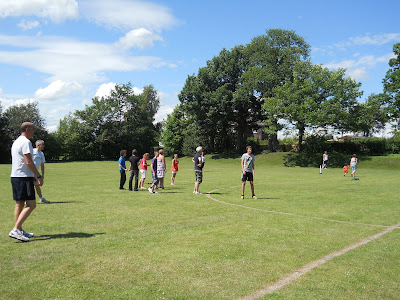 We parents commented how we felt privileged to be considered cool enough to be seen out with in public!!! 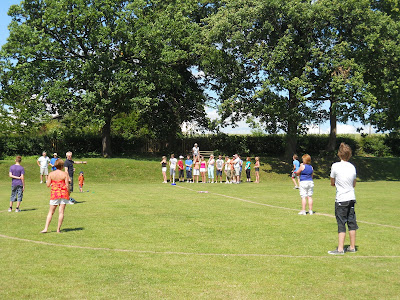 And then it happened.
After our picnic, we were all summoned to the middle of the field where 2 captains picked the teams. INSTANTLY I was transported back to EVERY rounders game I have played since I was 5 years old - and ALWAYS the last to be picked for the teams. And I was - the last to be picked. (Young mans best friends mum told me later that it was always the plan! - gits!!!). Years of therapy wasted as all the feelings of sporting humiliation came flooding back! 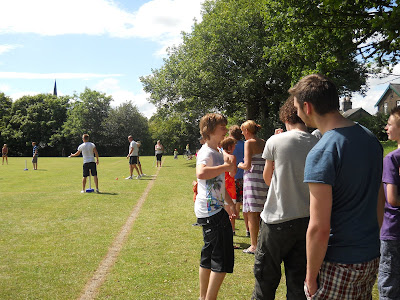 I only half shamed myself though. On my first go, I hit the ball - with the stick!! something I had never done before EVER!!! Only to be caught out!
My second go was a bit more embarrassing. I hit it again - miracle! and ran to first post. The next person hit it, and I ran to what I thought was 2nd post - only to be told that the post was actually just a fielder, so they dobbied me out at the actual 2nd post!
As my kids would say "Its never fair!". I get past 50, and suddenly become good at rounders - only to be thwarted by a confused state of mind!
Posted by Diane at Tuesday, June 28, 2011

I love rounders, but dare say I wouldn't be able to run (in a sensible fashion!) or hit if my life depended on it these days.

I hope it never comes down to that by the way.

At least you gave it a go and had fun.

What a fab idea, and so lovely that young and old, parents and children were all involved too. At least there was plenty of fielders :0)

What a wonderful occasion.
Similar discovery of suddenly becoming "sporty" happened in my 30's when I got involved with our Trade Union's Sports and Social club! From being a useless left handed rounders player who, like you,had always missed the darned ball, suddenly got "my eye in" and was thwacking them all over the place! I also played a few football games and for ever after that, if any lady mentioned they were going to have an hysterectomy, my DH would chime up, "you'll be fine, no need to worry, our lass scored her first goal after having hers"............
Carol xx

Isn't it fab all the friends arranged it. I had a picnic and rounders match for my 40th birthday a couple of years ago.
They were rotten leaving you to last though!
Your comment made me giggle! Didn't see the prog, but hopefully it's been recorded.
Lisa x

Oh how I remember "that" feeling......... anything involving a ball and I was never picked. Pah!

However, that looked like the loveliest of social events and they should all be proud of what came from it - fun!

I'm sorry I laughed, but I could just see it happening. Wonderful group of young people to organise such a great day though.

I'll bet that was a really great day out! I haven't played rounders since Juliette's Leavers versus Staff and Parents game at her primary school, I wasn't much good then and I don't expect I've improved any with age:)

What fun, I would love a day out like that but as I have no children..... Diane

BTW, I seen the awesome comment u left, thanks, glad to know u like it. I never knew if that was supposed to take place in some actual town in England, but on the show it's a town called West Wallaby. I have loved that cartoon since 6th grade. And believe me, the second I get a passport and enough money, I'm gonna b on the next plane heading your way,:). Because England is one place I would definitely loooooove to see b4 I die! And the music scene? Don't get me started, I'll b here all day telling u how much I want to see Abbey Road because of my love of the Beatles!

Oh my goodness what a lovely young man your young man must be to be involved in a circle of friends who want to do something like this. That's really lovely.

God I sucked at rounders. The one sport at school I could never get my head around.

How cool is your son!! How cool are his friends too for them all to organise a fun day with FAMILY. You must be SO proud.
Anne xx

What a lovely way to spend a day
Sue

Looks like a great day! I was always last to be picked too....quality is best left to the end, I think?!! Cx

Well, it's no wonder you were caught out with all those fielders, you didn't stand a chance. What a lovely day, that's certainly something different.

I LOVE rounders, what a wonderful treat for you all and how inventive!

I was always last to be picked to, I completely understand that feeling. I always have the last laugh though because some of the bitchier girls, well lets just say I have a far more comfortable and contented life than they do.

I was wondering if u get a chance, to email me a list of people u would either date or marry at hughjackman18@yahoo.com because I'm thinking about making my next post titled Marry or Date. There's no rush on it. I just want to do a blog that everyone can comment on, do something universal that everyone likes.

You hit the ball with 'a stick'? Maybe that's why you're now so good at it - they only had rounders bats at school!

Sounds like fun! I used to dread rounders and hockey at school as I wasn't very good at either. I used to volunteer for cross country runs to avoid team games. I could never throw or hit the ball properly and just remember the derisive groans of the others when I did it wrong. I've just had that sinking feeling in my stomach typing this comment! Glad you had a great time though:)

How fantastic of the kid's to organise that.

Not being particularly sporty at school, rounders was my kind of game - you spent most of the time stood around, either fielding or queuing to bat, especially if the teams were big.

Hi Diane, Looks like a great day . I was always the last to be picked and I'm still not keen on team games ...scarred for life :0)
Jacquie x