The second National Trust property we visited was Coleton Fishacre - another beautiful house that I could have moved in to. The house was built by and lived in by the D'Oyly Carte family who built the Savoy Theatre and Hotel and who ran the touring light Opera Company. Its less than 10 miles away from Greenway and I wondered if they ever invited Agatha over. Whilst Greenway was very much a "lived in, full of stuff and comfy" house, Coleton Fishacre looked and felt very much like a party palace. The National Trust have had to re furnish the house as only one room was left with furniture in it when it was sold. However they have gone to great pains to replicate it exactly as it was portrayed in "Country Life" in a feature it ran in the 1930's . They even tracked down the exact printing blocks used to make the bedroom curtains in Paris and had curtains printed using them.

The red border in front of the house was apparently just "going over" but looked stunning to me. 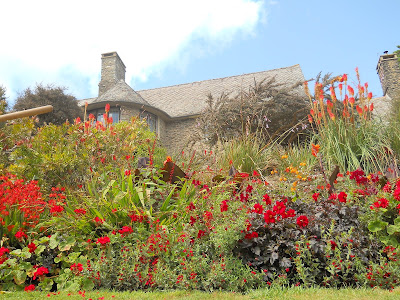 Information in the house states that Rupert D'Oyley Carte was sailing past the combe (valley) and he decided it would be a great place to build a house. They quarried stone from the estate to build the house. What a whim!!! 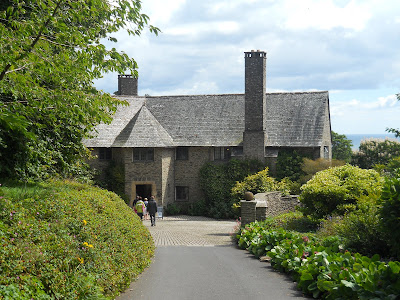 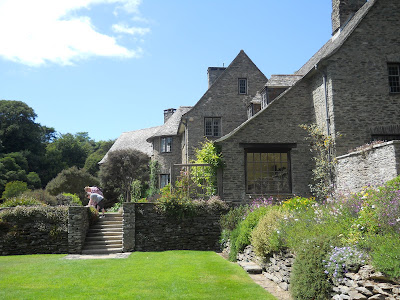 This was one of my fave features of the house. The Loggia had been built so that the family could eat Al Fresco as much as possible. 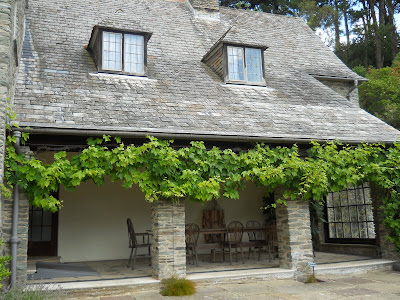 They obviously enjoyed their time in the house. A sea water pool was built at the bottom of the combe and they would take their guests down for a swim at high tide. A bell would be rung at 6pm for cocktails and G&T - my sort of hosts! 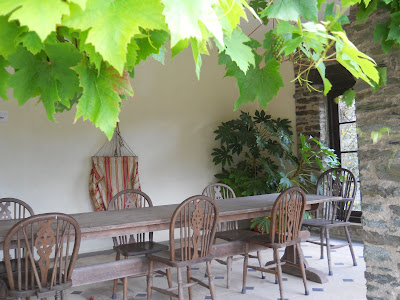 The gardens are simply stunning and feature many exotic plants and trees which flourish in this part of the UK because of the Gulf Stream. The gardeners over the years must have toiled really hard as it is exceptionally steep from the house down to the bottom of the cove. 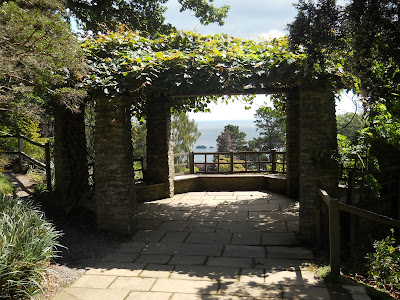 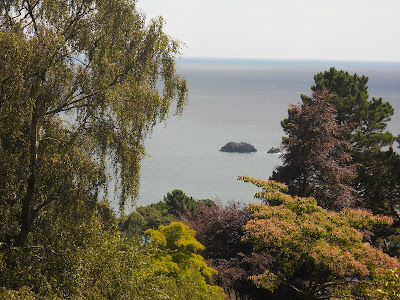 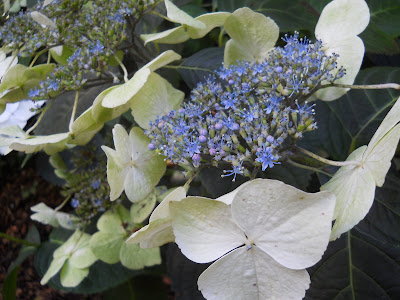 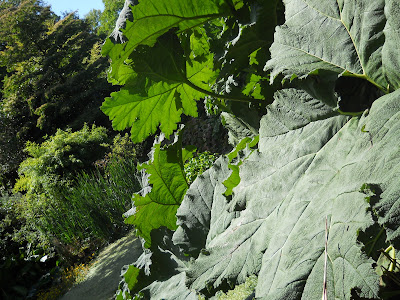 My other favourite room was the enormous lounge with the piano in it. They were playing Jazz on the gramophone and it had a fabulous atmosphere. I wanted to don a black beaded cocktail dress and drape myself on the chaise longue! Another place well worth a visit if you are ever in the area.
Posted by Diane at Sunday, August 14, 2011

wow what a fabulous place! I love the 'Al Fresco' area too - it's just perfect!!

It looks like such a wonderful place, i'd love to visit! x

What an amazing place, I would be very happy having breakfast and/or sun-downers there it is a beautiful spot. t'other Diane

I think we must have spent the week following each other around.It is a lovely area for a holiday though. I would love to go back and see more. :)

Looks like a lovely place and a lovely holiday - with perfect weather, judging by the photos! I love south west England...

Fabulous place -what a vibrant, bold colour scheme in that garden border-would love to visit this place !

What a gorgeous place. I love the idea of the garden going right down to the sea.
Anne xx

That would be a stunning place to live. The gardens are so beautiful and the seaview just perfect.

I love going to places where you can imagine the parties that must have once taken place.
Lisa x

Oh this is my favourite NT place that we've visited so far, the atmosphere feels so special. looking at your photos makes me want to visit again!