Ive never managed to be around for any of the Open Days that they have held at Thornbridge Hall, (near Ashford in the Water, Derbyshire) and its one of those places that I have always wanted to see more of. The hall is privately owned by Emma Harrison - local Entrepeneur and "Secret Millionaire" and when I read that the gardens were open today under the National Garden Schemes, I thought it was a perfect opportunity to visit. 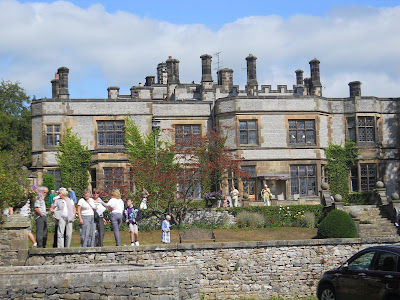 The history of the hall is very interesting and I was surprised to read that it was owned previously by 2 more Sheffield entrepeneurs at times throughout its history. 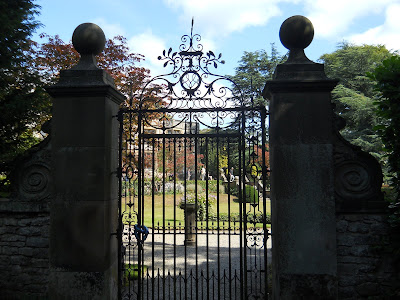 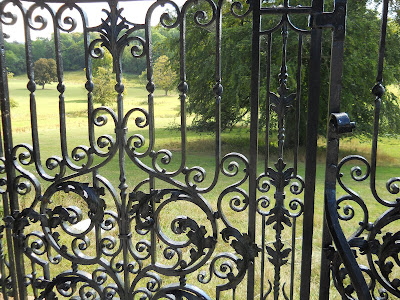 I have to say that the gardens were really surprising. I didn't expect them to be as stunning as they were - my photos cannot do justice to them. 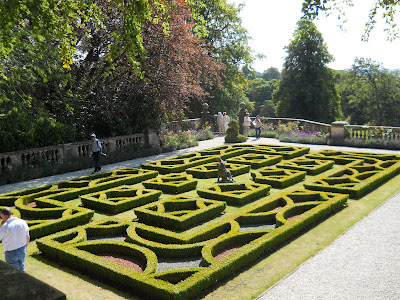 There are delights at every turn - but even though it is all really grand, it looks totally lived in and very used. 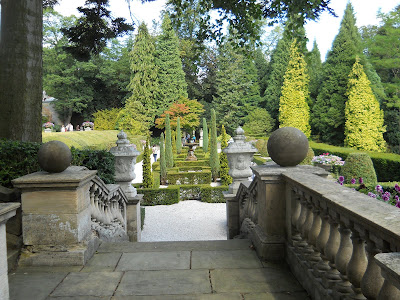 Some of the features in the gardens were bought when other local stately homes fell into decline. A couple of the fountains, and this stunning temple were from Clumber Park. 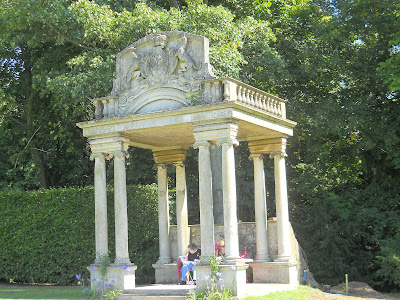 I wish you could smell these sweet peas - there were lots of beautiful sweet pea wigwams dotted around. 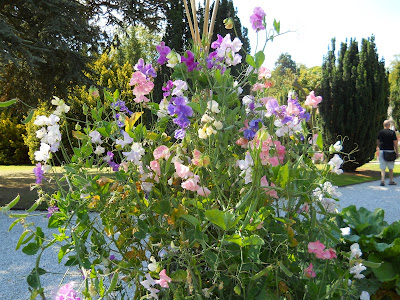 The Potager gardens were stunning - they were in a splendid very sunny spot and I spotted lots of produce being grown very succesfully. 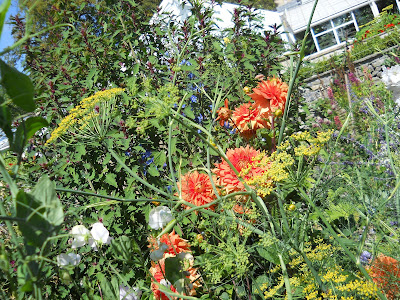 This chap seemed to have the weight of the world on his shoulders! 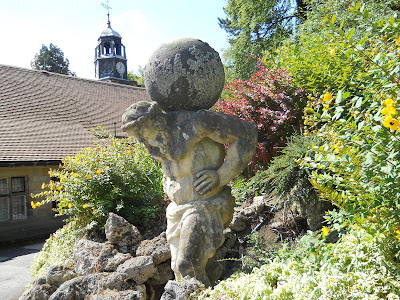 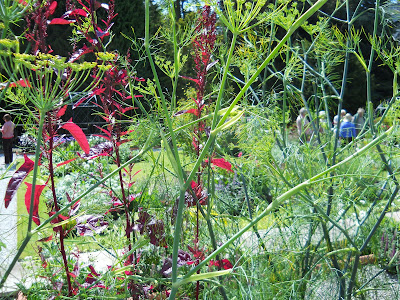 The borders were all stunning. They had a great sunny and hot day for the Open Day. I got a lot of inspiration for my own pocket hankerchief sized plot. 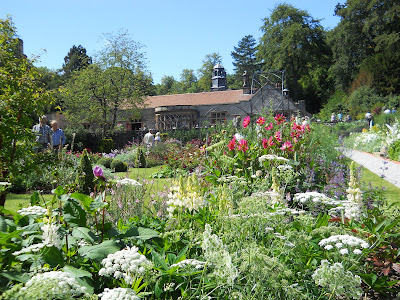 One of my favourite parts of the garden was the relatively new Orangery (seen here from the coach house where delicious sandwiches, cakes and beveridges were being served). 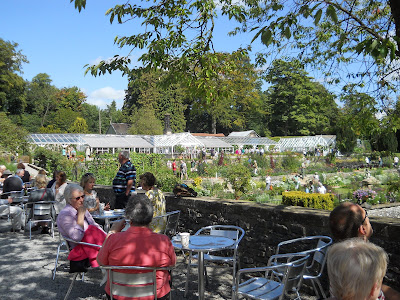 Emma appears to live with her extended family and a few friends. The house and gardens look as if at any given time, they can - and do - turn into Party Central. The Orangery had lots of places to sit and dine. 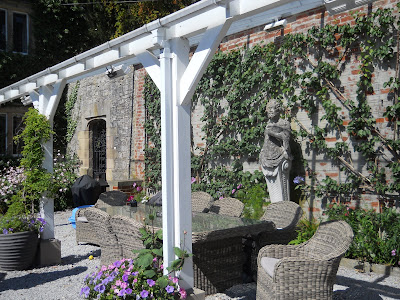 In fact they had built a kitchen into one end of the Orangery so that they could cook down here - away from the house - straight from the garden. Behind the (fabulously Farrow and Ball painted) brick wall, was the old potting sheds. Now turned into a Micro Brewery!!! A great addition to a party house - and we tested the beer ! It was really really good. The lovely pained units were full of mismatched china. I loved it all! 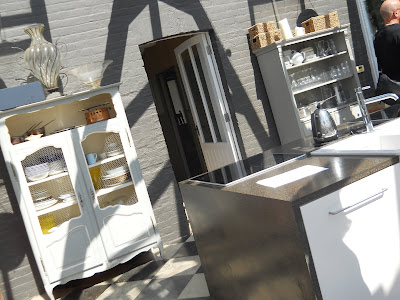 Emma is also growing 2 Lemon tree's just outside of the doors - handy for her G&T's! 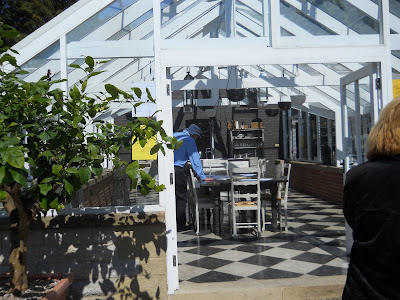 We also passed a new part of the hall that the family has built - a fab swimming pool.. So I came home wanting to completely redo my garden - to incorporate an Orangery, Swimming Pool, Pottager, Brewery and some new plants. The hall also has a underground Bar, Gymnasium, Ballrom and lots more stunning features. I really loved it all. Hubby is slightly alarmed at the number of projects I formulated in my head whilst walking round! 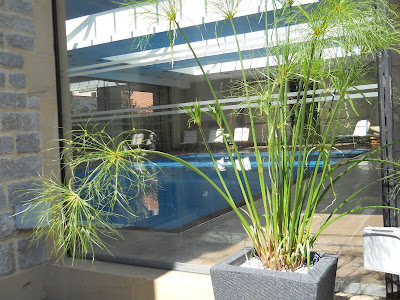 Then on our way out - something strange happened. We passed a young couple - and even though I knew I didn't know them - I thought they looked familiar. I mentioned to hubby that I thought that I recognised the young lady as a blogger that I regularly leave comments for - and she for me. He told me to ask her, but I daren't in case I was wrong. Then we bumped into them again around the corner - and she said "Hello - youre Diane aren't you" 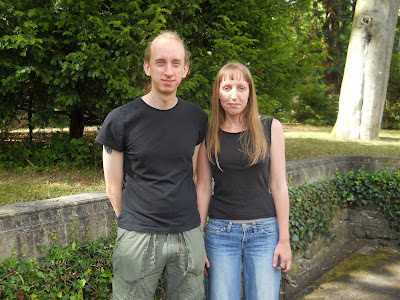 It was Louise from Ramblings of a Roachling, (and Dave - her other half). It was lovely to stop and have a chat with them - such a small world.
Posted by Diane at Sunday, August 21, 2011

Thanks for 'introducing' me to Louise's Blog. Sadly I don't get to Derbyshire as often as I once did.

Oh WoW!This brought back some memories! I spent two years living in Thornbridge Hall from 1956-1958 when it was a Women's Teacher's College It was beautiful then too. Did you get to go in the hall? In the library there is a secret room where a wall swings open to make a priest's hole and it has an exit into the next room. I spent hours and hours in the gardens studying the birds for my thesis, The Birds of Thornbridge Hall (Which I still have). It was marvellous. I could keep my sanity from all the mounds of work they heaped on us by just sitting and bird watching. The gardens weren't as elaborate then as they seem to be now. I even have a photo of me and my best friend Mollie standing in front of Atlas. I wondered if he was still there. I had just started going out with my now, husband and there were many nights we were making a dash for the back door entrance by 11:00 o'clock before getting locked out. He was attending Cliff College over near Calver and Baslow. It's still there. Thanks for a wonderful post.

argh, bad photo!! Dave thinks he looks like a chinese chipmunk (?!) and what was I doing with my mouth?!!

Hope your camera still works after that one!

What a surprise to bump into you! I had wondered if we might see Rosie there, but I never expected to meet you today!

We are spending a few days in Clitheroe with Dave's family and I've just managed to sneak five minutes on a computer to see how bad the pic was, hehe! Hopefully I'll have lots of new countryside to show you when we return home and sort out the photos (and I'll have lots of blog reading to catch up on too!).

Just tonight your name resounded in our house!
Country file were in South Hams which I only recognised from your beachy picture!

Hi Diane , thanks for your comment over at mine. I just popped over to say how much I have enjoyed your holiday posts and found another feast for the eyes...
That's an open garden I would love to visit one day ...money and taste can do great things .
how great to bump into Louise :0)
Jacquie x

I didn't even know Thornbridge Hall existed. It looks stunning and not a million miles away from us. Would like to visit.

Anna at the Doll House said...

Beautiful gardens and I just love the idea of the owners of such houses going to 'garage sales' at stately homes to pick-up some bargain fountains and statuary.

What a great post, lovely photos and a great armchair travelogue. Sounds a gorgeous place, thanks for showing me around

Oh, how I wish I'd been there! I wanted to go last year and something cropped up and I'd forgotten all about it this year. I've peered over the wall into the gardens from the walk that runs off the High Peak Trail. It looks and sounds wonderful - and you had the added bonus of meeting Louise and Dave - as you know Louise and I have met before but I haven't met Dave yet - hope you all had a super day. I can just see you digging down in your patch to create an undergound ballroom and micro brewery:)

I wish I could have joined you it looks like a beautiful place to spend time walking around. What fun to bump into another blogger as well. t'other Diane

I think your photos are stunning and are doing perfect justice. Those photos are lovely, and I just adore when you put pics on here. So beautiful

I suppose with space at a premium, you'll have to build your pool under the garden and when you want to swim in the sunshine, it rises up 'Thunderbird' style.... You're not the only one who dreams big! LOL!
But, if you had that much money, you'd move to a bigger plot from the start?

What a great post! I saw the Secret Millionaire episode, just shows what a nice lady Emma is.

What a fabulous garden!
I love the plans for your garden - no garden should be without it's own brewery!

It must be great to be able to visit stately homes and gardens in close proximity. I have to travel far to see anything like that so thank you for the armchair travel. Its fun to meet bloggers.

You visit such lovely places and what a small world!
I have awarded you the versatile blogger award. I do hope you don't mind. You don't have to accept of course. It took me ages to list my links to blogs! I am hopeless with this computer though. It is so SLOW!!!
Much love.

Oh wow what a small world it is, we where at Thornbridge hall for the Summer garden party... sadly i didn't see much of the gardens as i had a trade stand there but my youngest girl and twin boys had a fab time! One of the twins had a lovely long chat with Emma about the house and she was so sweet to take the time to answer his questions!

What a coincidence! I recognised somebody from a blog once, and they recognised me, but I was having a rough day so I hid down an aisle in the shop hoping to go unnoticed. hehe.

This place looks out of this world. How the other half live! x