A wander around Sheffield

I was meeting a friend in town on Saturday, so I thought I would take you along for a little look round too. I had to drop the DQ off at work first (She seems to be enjoying herself at Uni - fingers crossed!)
Meadowhall Shopping Centre was built on the site of a steel works, and to commemorate this, it has this wonderful respectful bronze monument called "The Steelmen" 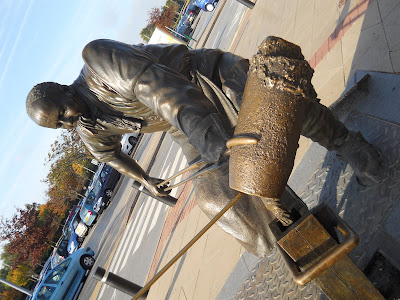 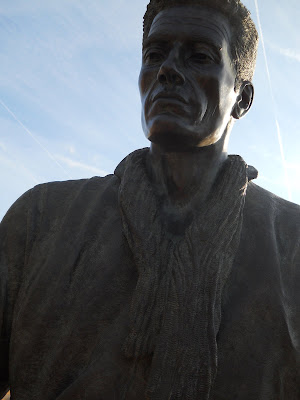 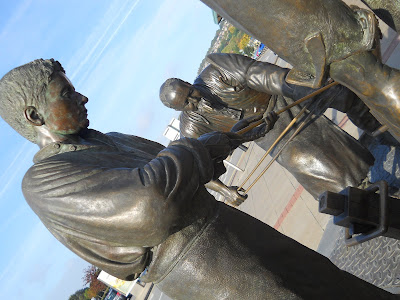 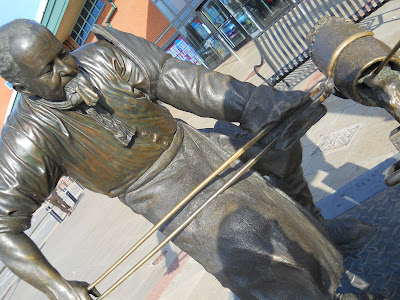 I parked up at the tram stop, and took the tram into town - no hassle and cheaper than parking in town. I was looking for things I had never seen before. 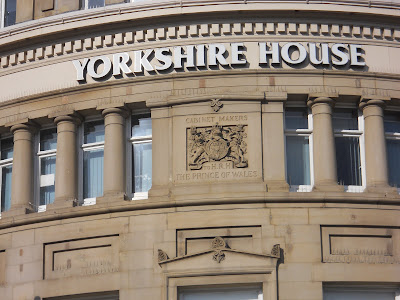 Sheffield was bombed heavily in the war, but luckily many of the old buildings remain. 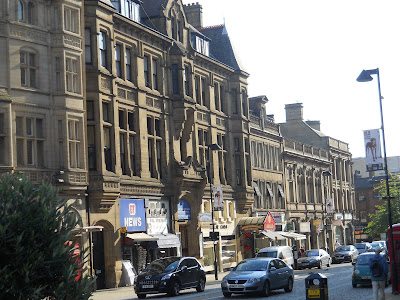 They recently refurbished these buildings. They demolished everything - except the front of the row, which they held up with lots of scaffolding. I think its great that they made a workable modern building - but kept the old look and frontage. 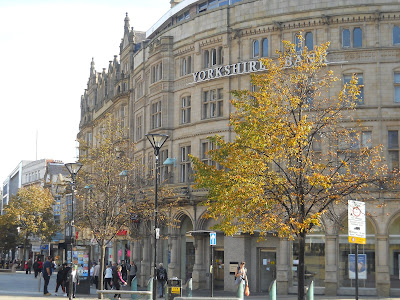 Some buildings in the city look quite Parisien I think. 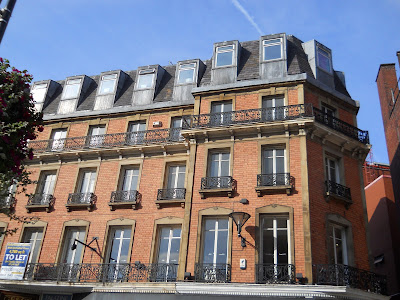 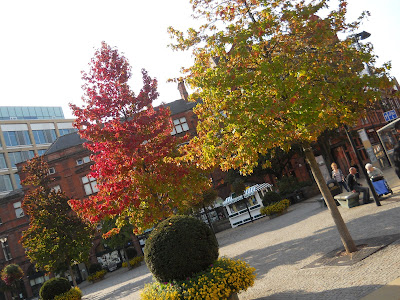 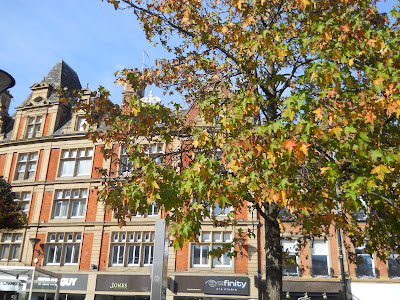 One bit of the city that has suffered greatly over the last 20 years is "The Moor". The Moor had its hey day in the 70's and I remember shops like Habitat and Hamleys opening up here, but now its all very run down. Controversially, they are moving the city market to here. Hopefully, it might help regenerate the area. 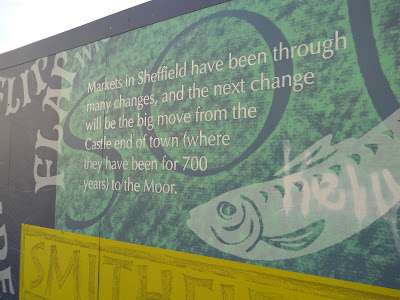 They have some old photos of the area - I thought this looked very grand. 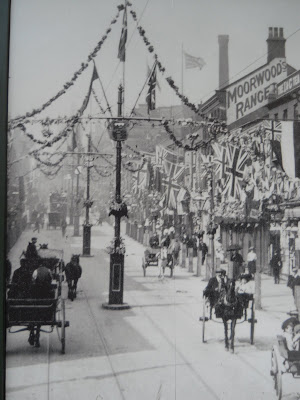 The old department stores that were rebuilt after the war now look very shabby and dated. It will be interesting to see how it gets developed. 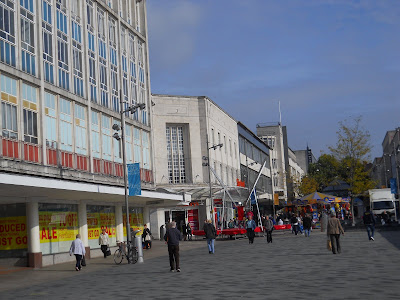 At the moment, this is where all the empty shops are. Hopefully this part of the city will become vibrant again - 0nce the doom and gloom of recession are over. 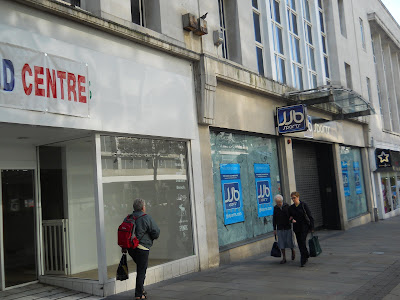 Tomorrow, I'll show you a truly beautiful bit of the city.
Posted by Diane at Monday, September 26, 2011

Didn't know the market was moving to The Moor. It is rather depressing at the moment. The Market itself is rather scruffy. Are they're going to flatten it and show the Castle foundations that I believe are under it.
Walking round it's surprising what you'll see if you look above eye level. Gods, goddesses and all sorts of coats of arms at heights they're rarely seen.
Waiting for the "truly beautiful bit", wonder if I'll agree. As always smashing pics.

Love the old photo with all the flags and bunting!
The steelmen bronzes have such interesting faces.
Lisa x

As always, you make Sheffield look like somewhere interesting to visit. Post war architecture wasn't the most attractive, lets hope the area gets regenerated soon.

That bronze monument is amazing. It may be the only bit you like around there but it is fantastic. Having never been to Sheffield, I find all the photos interesting. t'other Diane

They moved the steelmen outside didn't they. I am with you though I DO NOT like going to Meadowhall although have to admit I was one of the very first people to go in and even got a free £5 voucher for Next for my troubles and my picture in the Star - lol. The Moor is really run down isn't it needs a little work! Oh well onwards and upwards.

"Tomorrow, I'll show you a truly beautiful bit of the city...."

you just have x

Glad to hear that the DQ is settling, though I thought she would. Nowt like Yorkshire folk to make her feel welcome. I've been to Meadowhall many times yet I've never noticed The Steelmen, I'll look out for them next time I go. I love those old photos, it makes places look so grand.

Yes, Meadowhell, not exactly a restful place!
"Reel Britain" (a great series) on BBC2 tomorrow is about the high rise developments in Sheffield in the 60's.
Carol xx

Used to work in Yorkshire Bank Fargate....those were the days...straight out from work!!!

So much nicer than Meadowhell....

Memories of shopping at the department stores on the Moor with my mum and aunt looking for a new coat for a family wedding when I was about 12 or 13, we often used to walk up there on shopping trips. Have only been to Meadowhall once and didn't see the sculptures they are wonderful. Glad your DQ is settling into her new Uni:)

I'll always remember those men as the 'meeting place' for if I ever got lost as a child in Meadowhall!
The moor is a depressing place to be although I do love Atkinsons, they sell pretty much everything you can think of! x

I'm a Sheffielder now living in Cheshire. I've not been into the city centre for years. I was depressed by The Moor then, it looks even more depressing now.