One of my holiday reads whilst in St Ives was "The Friday Night Knitting Club" - much to the amusement of my young man! He kept asking if anyone had been shot yet! Or stabbed with a knitting needle.
I loved it, it was a great holiday read.  It was set in New York and centred around a single mother who owned a wool shop and the unusual friendships formed at the knitting club.  It was like "Sex and the City" but with knitting instead of sex.  I hear that they making it into a film, and I think it will translate well onto the big screen.  The book ends with a bit of a twist which I really didn't see coming.  It's proper Chick Lit, but OK for when you want a lighter read. 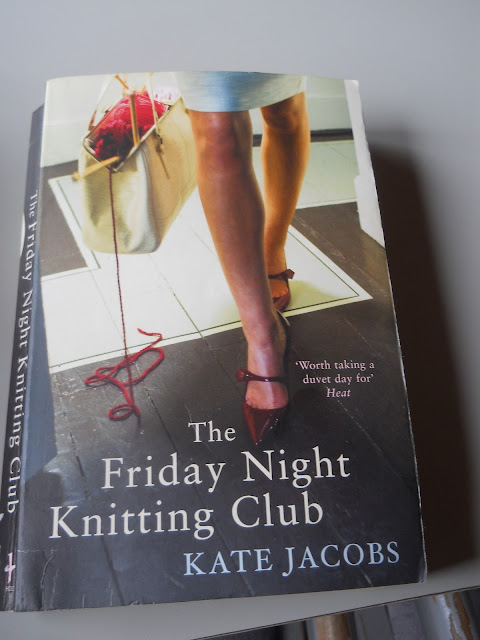 Hello!
I love chick-lit and this book sounds interesting. Your description of the plot reminds me of the Jane Austen Book Club. Have you read it?

Sounds great! I will have to try and find a copy! xx

Sounds fun. I'll look out for that one. I do most of my reading in my lunchbreaks at work, so I don't want anything too highbrow.

Like it says on the cover "worth taking a duvet day for". Sometimes we all need to read something a little light hearted. Thanks for the recommendation, Diane. x

Do you accept awards?
I have one for you!

oh my....I love NY and I love kniting.... sounds like something I could get into now I'm unexpectedly going to have more leeeeeasure time!!x

Well very pleased to see she was knitting with red wool ... that's my girl ♥

Thanks for all lovely and fab comments sweetie

Hope it's not too long before we see you again ... bfn

I've read this too and without giving anything away it made me very emotional, a fantastic read.

I shall look out for it. On holidayy I read The Lace Reader & looks like there will be a film too

I will look out for this book. It sounds like a great read. Jx

Think that sounds like my kind of book, thanks you for the review.
Carol xx