On Sunday, in need of fresh air, we decided to go and take a look at the Riverside Festival at Kelham Island in Sheffield - a half hearted affair that the city seems to do so well!!
We started off by partaking in brunch at the Milestone restaurant (which was a great way to start the day).  It wasn't all about the food, we later learned that restaurant was once one of many Sheffield factory pubs, built on the corners of roads where the factories were - ideally placed for the parched steel men to call in on their way home from work - no matter what time of day! 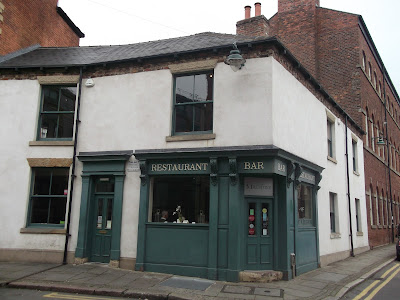 Kelham Island is probably my most favourite museum in Sheffield, and we had a good look around the many stalls set up by local history groups - we are going to try and get along to a few of their talks over the winter months. 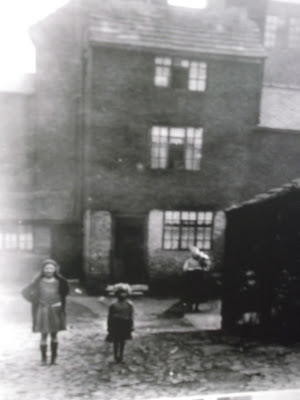 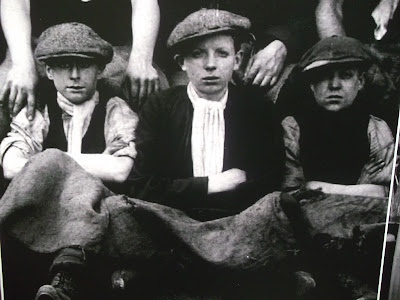 We had a little wander around the museum. 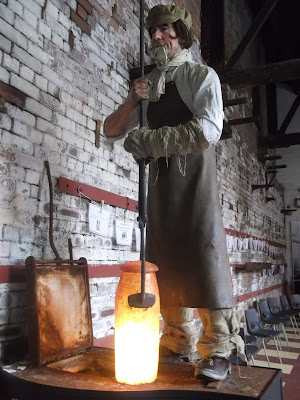 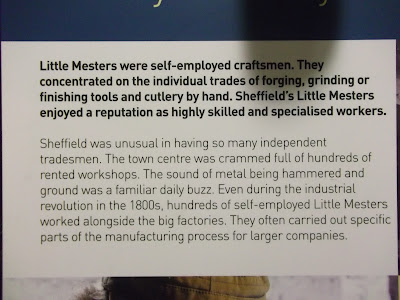 But the main reason for the visit was an advertised tour around the are by a man who's occupation was listed as "Professional Sheffielder".  He told us interesting facts about local buildings.  For example, he had helped save this lovely little building from demolition.  Now a brewery shop for the Kelham Island Brewery, it had once been home to the very small "Sheep Shearers Union" of Sheffield. 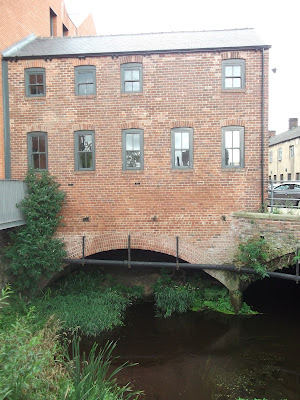 He told the story of the ill fated foray into Cotton production in the city. 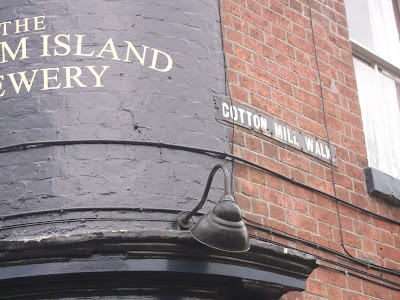 We saw a couple of these contraptions being ridden - not comfy but you can carry a lot of luggage! 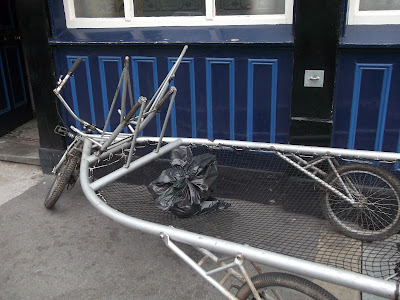 We learned all about the old factories that are dotted around the area - I loved the tiles on the main entrance of this one. 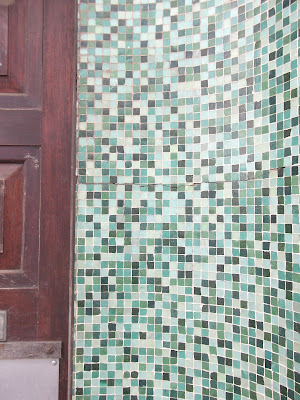 He told us how the council had wanted this pulled down in the 80's, but thankfully it is earmarked now for restoration. 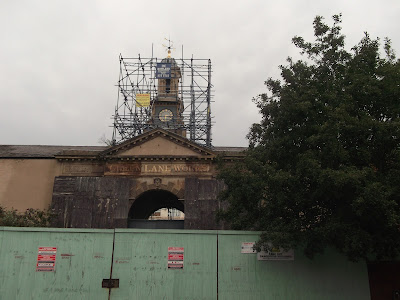 We wandered around several old cutlery factories - all run down but with preservation orders on them now just waiting for investment. 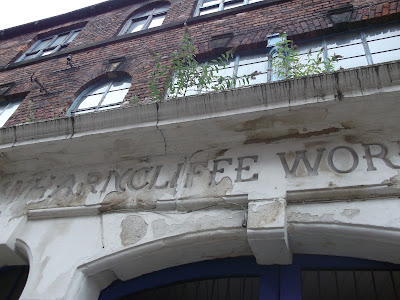 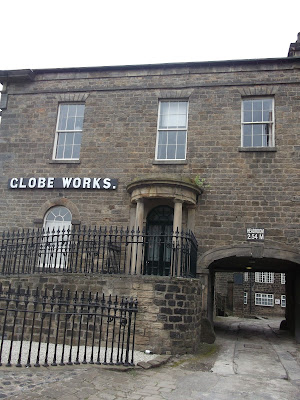 They cleverly recycled the grinding stones in the olden days - patching up the roads with them! 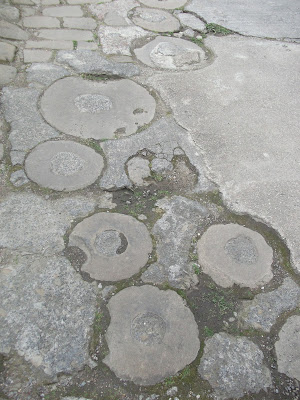 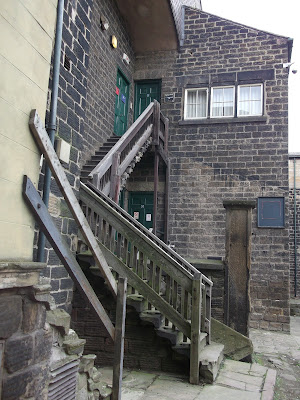 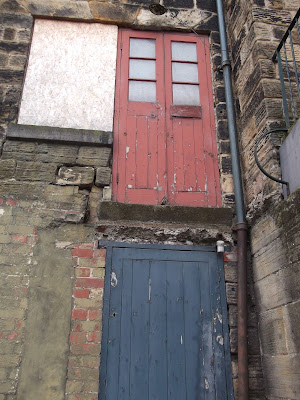 We saw relics from the olden days when we had really big breweries in the city. 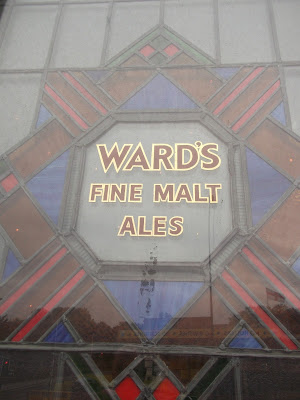 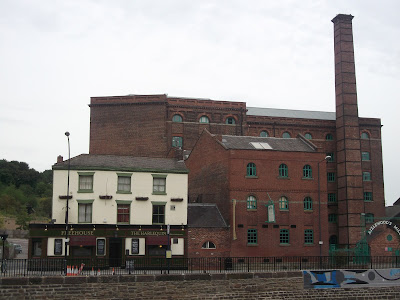 He pointed out the Flood memorial from the horrendous flood of 1864.  I've walked past this many times before and never noticed it! 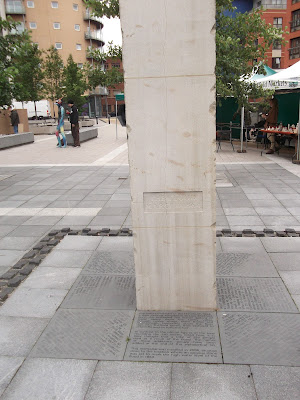 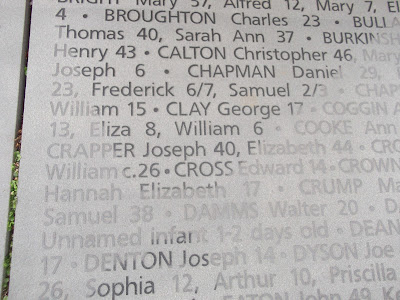 And we spotted a new Pocket Park on the banks of the Don. 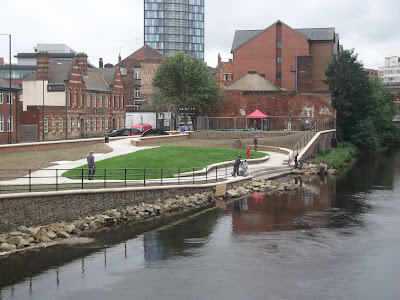 We'll have to pop back and check this out when it is finished. 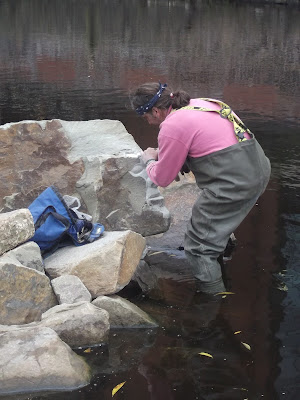 It was a great walk around a very old, extremely interesting but sadly neglected area of our city
Posted by Diane at Monday, September 24, 2012

Great post - love the grinding stones in the road! Glad some old buildings are being restored and reused.
Liz @ Shortbread & Ginger

Lovely walk - too long since I have visited some of these factories!

Oh!!! I do enjoy your jaunts around Sheffield. My Mum, Dad & I were talking about Sheffield last night and we were saying how we wouldn't find our way round now. I really must come and have a look around some of the places you have shown us.

I also think you are doing a great job of promoting historic Sheffield. The Globe Works building & iron railings are beautiful.

Have you thought of becoming a tour guide ;o)
I'm not sure why but i'm really attracted to the red and blue doors and those tiles are fab too xx

It also occurred to me that you would make a great 'Professional Sheffielder'!

I'm very sorry to hear about your father in law.

I'm so glad Britain is doing so much restoration and brightening up. When we left in 1960 and returned for a year in 1966 we felt that the Britain we knew was fast disappearing.

I've been doing my family tree and found many of my relatives lived and worked in Sheffield, so it was a joy to share your journey through the streets and see some of the history. Unfortunately I can't do it myself - too far away in Oz.

Our connection to Sheffield comes through the university. My big sis went in the mid 1970's and now spookily my son has just started. Your tours and snippets give me great view of a city I don't know well but can now stroll around with a little knowledge. You're a star! Thanks x

Wonderful post, Diane. I love the corner pub in the first photo and it is good to hear that many of the other buildings survied being demolished and are now being preserved and re-used:)

Another lovely post, thank you. To see the face emerging from the stone in the last picture is rather magical.

You find such interesting places and generally not too far from home. Have a great week. T'other Diane

I echo t'other Diane :) but why you don't show us the scrumptuos food you had?!
xxxxx

I love Kelham Island too, I want to go to the Christmas market there this year. Never been to the Milestone though, might have to give that a try. Lovely photos as always. xx

Love your post - isn't fascinating to take another look at an area you know well. I have just read your previous post too - sending loads of sympathy through the 'blogosphere'. Jx

You should do the job of a tour guide on Sheffield. You'd be brilliant!
I would love to go and see all these old buildings, so much history to learn about.
Lisa x

You should do the job of a tour guide on Sheffield. You'd be brilliant!
I would love to go and see all these old buildings, so much history to learn about.
Lisa x

Hello! I tagged you at the end of my latest post. No pressure to keep it going, just wanted to let you know :)
http://lilyloveslola.blogspot.co.uk/2012/09/questions-tag.html

Well I never Diane. True to form I read your blog for the first time in ages and you have blogged about the very subject I have just this minute being reading about. As you know its 2 years today since Dad died and I got out Aunty Ann's book and have just read the section on Grandad Sapcote and his years in the Steel Works which incidentally involved lost of drinking in those above mentioned little pubs. TTFN

Always interesting tours you take us on Diane. Love the grinding stones re used !