I have had such a fascinating day.  We had a look at what was open locally for the English Heritage Open Days and discovered that Portland Works in Sheffield was opening up briefly for tours. 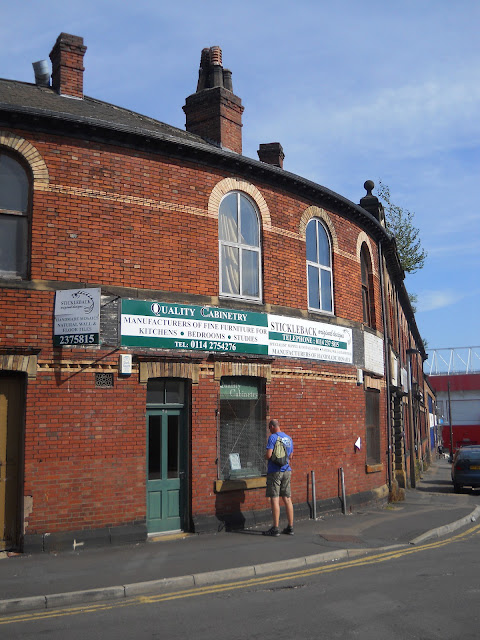 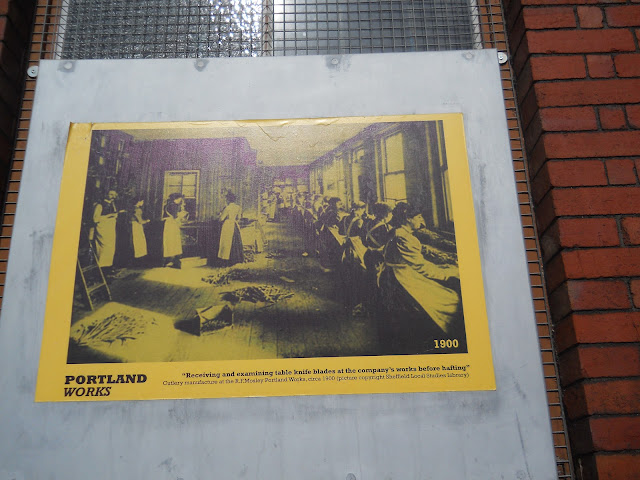 This amazing building was built in 1877 to house forgers and cutlery makers - the Little Mesters of Sheffield.  The building was recently up for sale and was going to be converted into tiny studio apartments, when locals stepped in an decided to save the works, and keep them true to their original purpose. 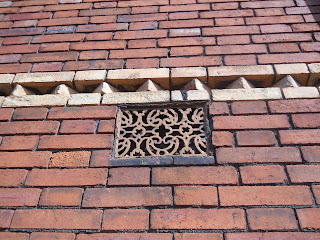 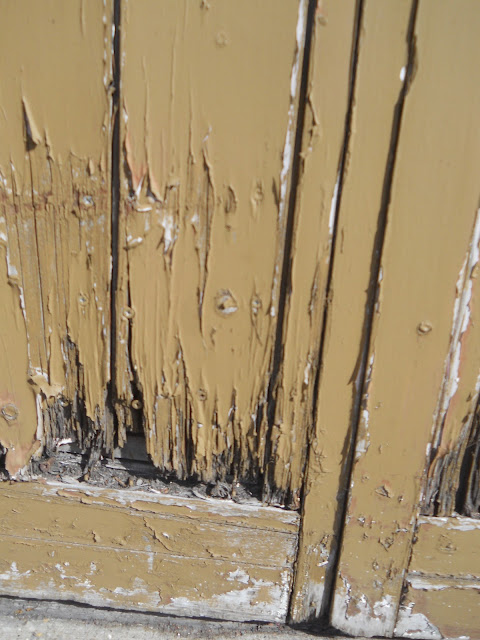 At present they are occupied by several craftsmen, some still making knives, but artists, musicians and other crafts people make a living from these lovely old workshops. 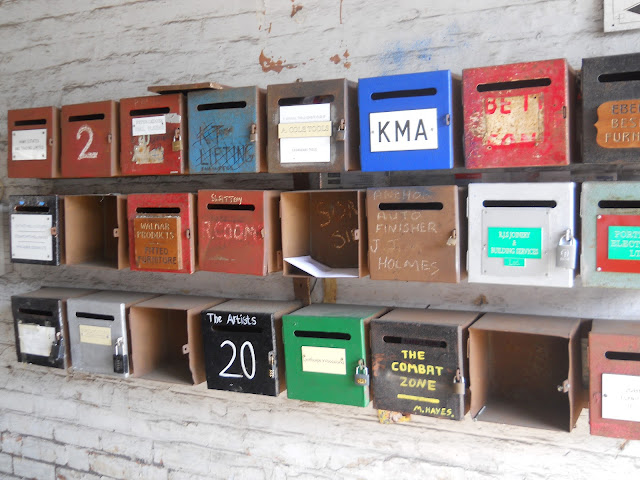 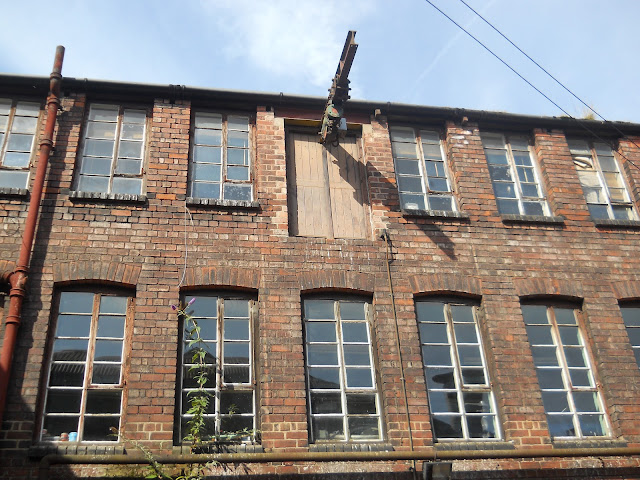 The inside of the complex is like stepping back in time.  I love that they are working to preserve these works and that they are bringing them back to life. 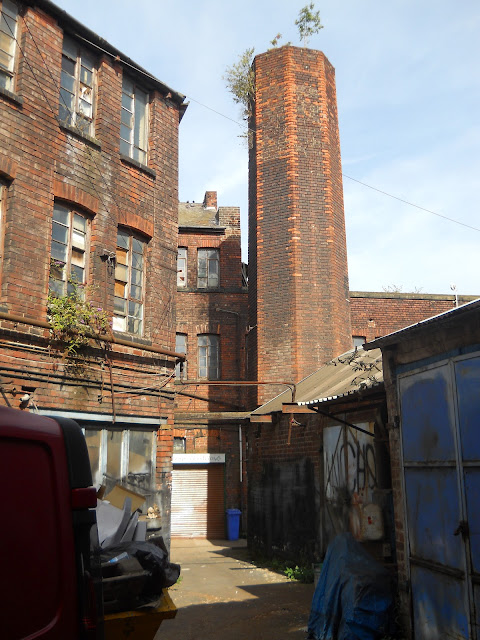 Relics from the past litter the site. 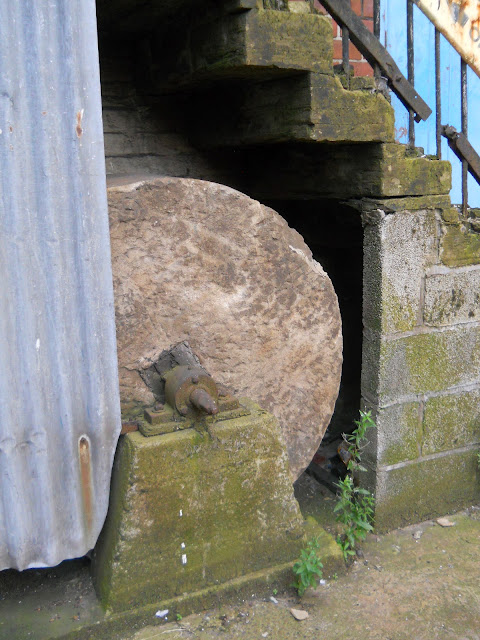 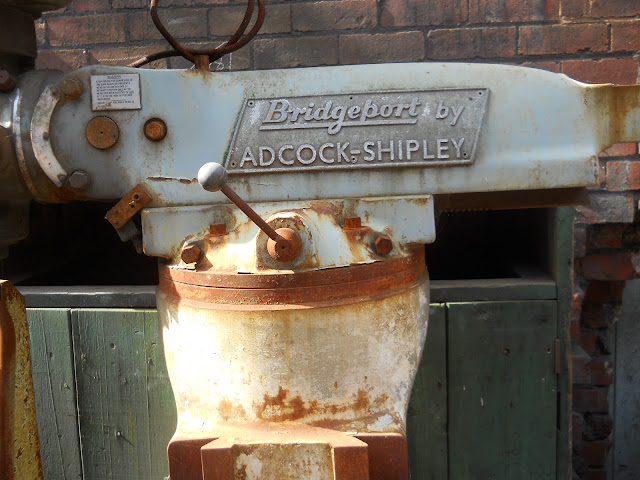 We were able to watch the craftsmen who make their living here, crafting items the same way as they would have been made when the buildings were new.  This gent was forging wood chisels. 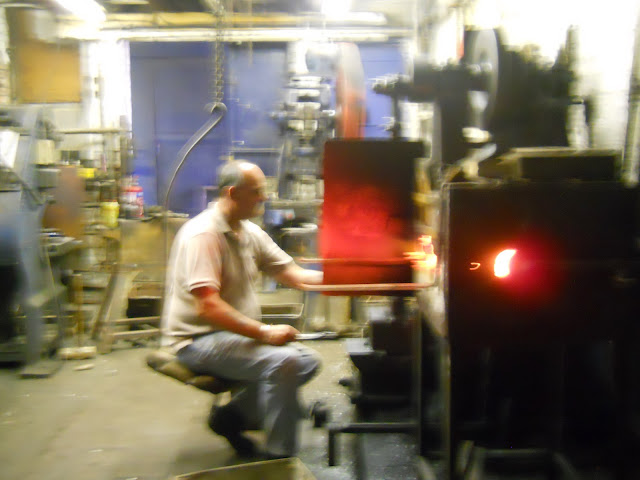 He starts with these blanks. 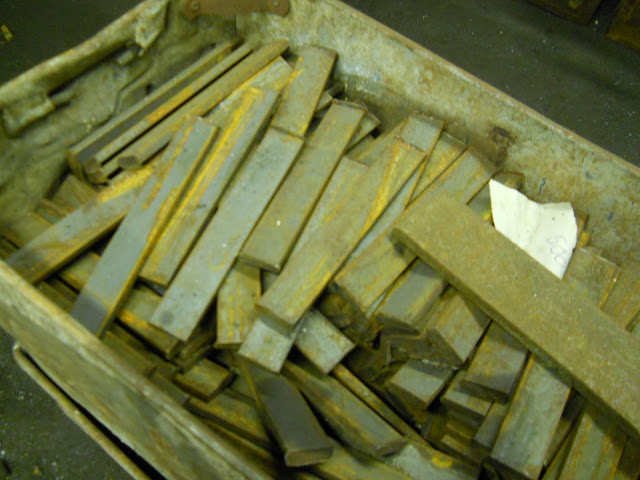 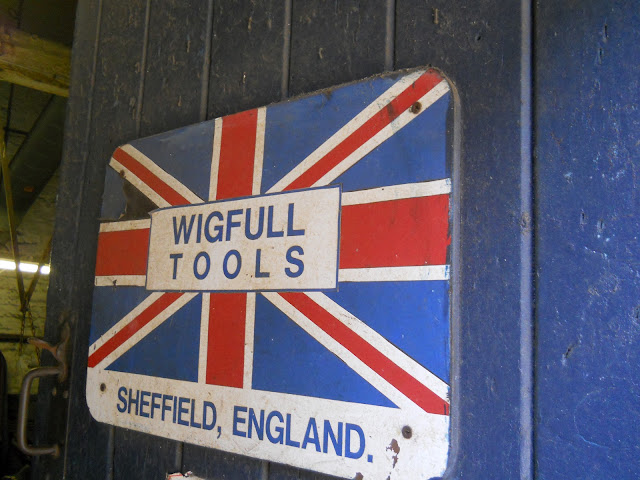 And Stuart Mitchell who works in this studio had a wonderful story to tell.  His father had worked here before, and Stuart had started working for his dad when he was just15 years old.  He now made custom knives for customers all over the world.  He is a young man who has a very unique skill that he is keeping alive and hoping to pass on to the next generation. 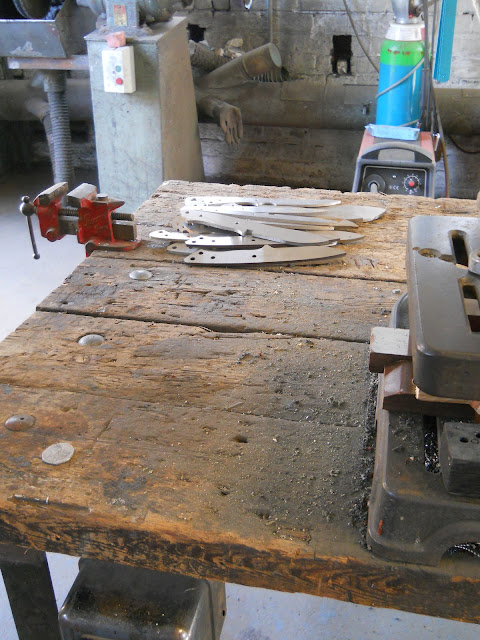 Can you guess what material this is?  He is making the handle of a specialist knife from it.  It is Siberian Mammoth Tusk - very very rare and very very expensive. 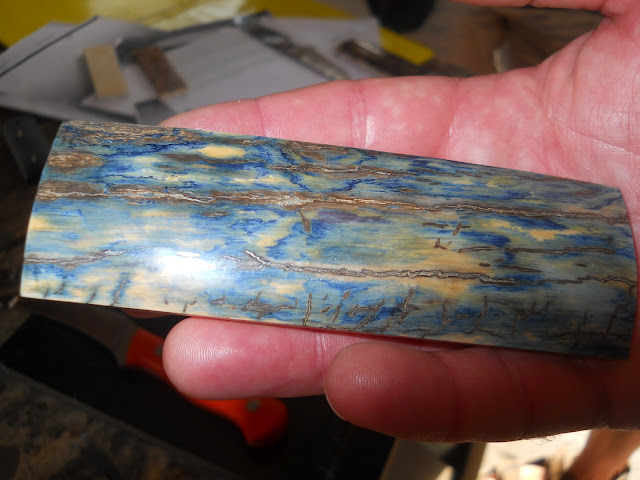 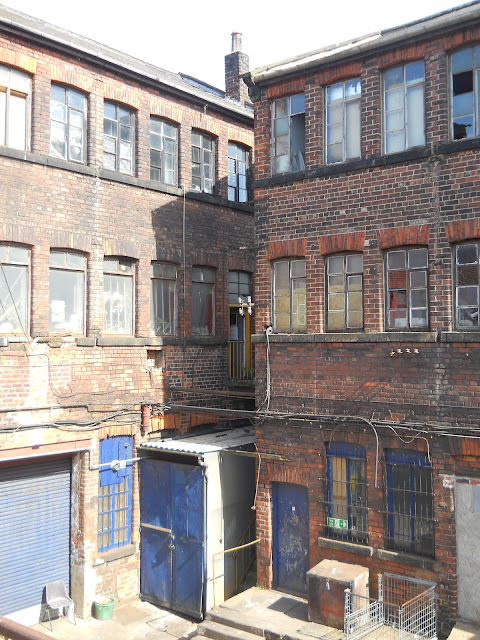 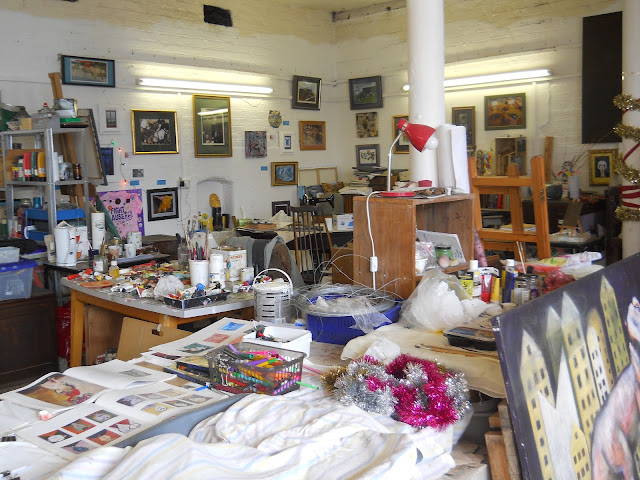 One of our favourite spaces was the roof where an eclectic collection of chairs for the present workers to gather and chat. 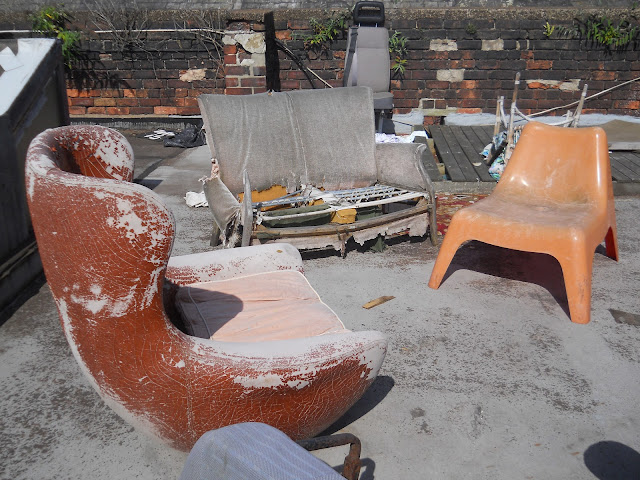 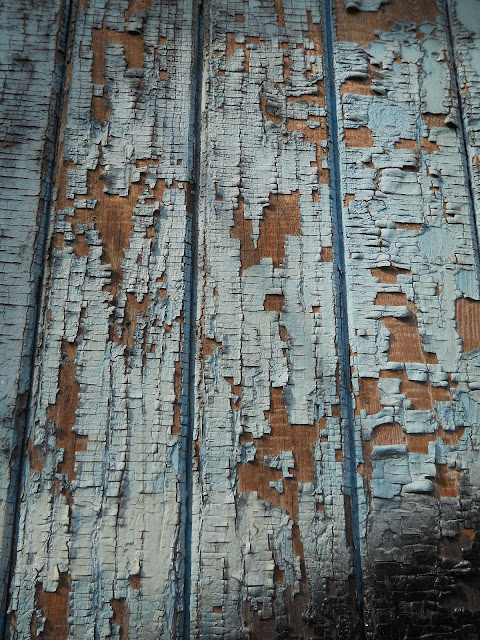 Its a brilliant building and such a worthwhile project.  The people involved mainly all have personal  reasons for working on the project.  One lady was collecting cutlery (mainly from ebay)  by Robert Moseley that had been made here.  Her God mother had been Robert Mosley's daughter. 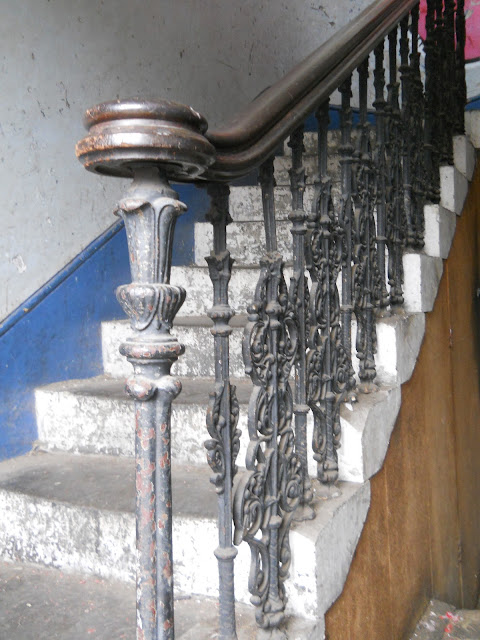 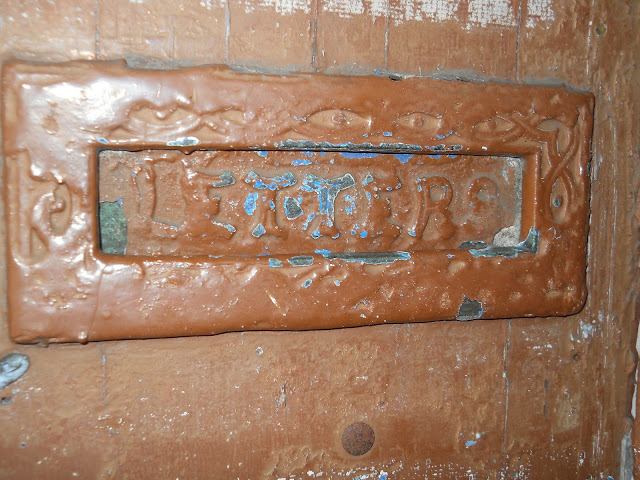 I am intrigued to see how the building gets restored and developed, and how they breathe life back into this stunning old place.
Posted by Diane at Sunday, September 09, 2012

It's really good to see buildings preserved and used for something close to their original purpose.

Far too many are either lost or converted.

And what a great opportunity for local craftspeople.

What a great day you had and what a super ending to what might have been the sad demise of yet another piece of our history. Like you I will be interested to see how they go about the renovation. x

What a great place, I love places like that.

It is great to see buildings like this preserved and put to good use.

Impressed to see that my maiden name will be saved & preserved for the future on some working machine & from Sheffield too where my Father came from, must pay this place a visit next time we are over.x

A really interesting little place to visit, you picked a good one there!
Lisa x

wow what a truly magical place....would love to have a studio there!!x

What a marvellous place to visit. I usually take part in the Heritage Open Weekend but was abroad this year. I shall have to wait for next year.

The Heritage days are such an oppotunity to visit places not usually open to the public. Your post was so interesting to read and see where some of the famous Sheffield cutlery was made. I'm so glad that it has been preserved and is being used for some of it's original purpose.
Sarah x

I am very happy that a little bit of Sheffield hertiage is being preserved. My Dad worked in the Sheffield steel industry until he was made reduntant in 1983, he was a metallurgist and my Grand-dad was a steel moulder for Firth Browns during and after the war.

Just lovely, the detail in the old buildings, you dont see that detail in newer buildings.
Keep us posted!

What a fascinating place! And that is some chimney! Your photos have captured so much of what is nearly-gone-but-still-here. The balustrade (is that the right word?) up the stairs is wonderful - good old iron work I think. And that millstone will be made of millstone grit, probably by a fairly local quarry. Oh, I'd love to go there! You had the best viewing - its bound to be cleaned up etc. but you saw it just as left, more or less. I do envy you!

It's heartening that industrial buildings are being seen as valuable and worth preserving, those works look fabulous. Is the building near John Street? I feel sure I have passed it when heading to the Harland cafe in that area (another gem off the beaten track!)
Great photos, as always. xx