A nice bit of culture

I was very excited when I heard that Baz Luhrmann was re making The Great Gatsby.  I love the book and the previous films, and I had seen some of the trailers for it and was just giddy! I have loved all Baz's previous films - I like the way he seems to not have to stick to a  budget, but just produces a fabulous extravaganza.  So with the Great Gatsby, I was surprised he stuck very much to the book - I didn't expect him to do this, the costumes were fantastic, the actors were great too.  The settings were lush, but I wasn't too keen on the "computer generated images" so much.  The only thing I felt let it down was the soundtrack.  Now, the soundtrack is really really great and a really brave choice, but the music didn't feature as much in the film as I thought it would - which was a shame.   My daughter said she wanted to feel as if she was at the party - and I know what she meant.  And I didn't see the point in it being 3D either.  I want to watch it again in 2D.  My son thought it was hilarious when I tried to sum up my slight disappointment by saying it wasn't "Baz Luhrmanny enough". 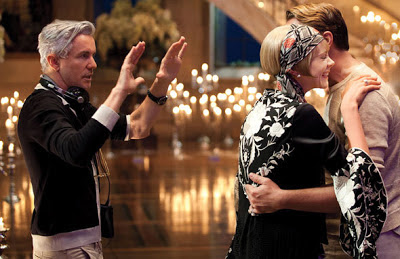 My other cultural outing was to the Lyceum in Sheffield to see Matthew Bournes Sleeping Beauty.   Again, Matthew Bourne can do no wrong in my eyes.  The production is simply stunning.  The costumes, the dancing, the sets - all totally spot on, and with Matthew Bourne twist in it.  Fabulous.
* All photos from Google images
Posted by Diane at Tuesday, June 04, 2013

Still haven't treated myself to Gatsby yet - love Baz Luhrman so I'm afraid my expectations are quite high - oh dear! Jane x

I read The Great Gatsby for the first time this year and loved it, although I haven't seen any of the film versions. Glad you enjoyed it.
Twiggy x

I read the book when I was a student (back in the 'dark ages'!). I'm hoping to see the film at a local 'art' cinema over the summer. Jx

My daughter went to see the new movie with her friends. She enjoyed it, but also says she wanted more of the music of the era etc. She also bought me the old version for my birthday and we've yet to find a good time to watch together. We didn't get to the ballet, which I had intended to treat us for my birthday although we did see Bourne's last production at the Lyceum so I know it would have been stunning. Glad you got to go.

The ballet looks stunning! I read The Great Gatsby many years ago and remember seeing the film with Robert Redford as Jay Gatsby. I loved Baz Luhrmann's Moulin Rouge so I wonder if I will like this one?:)

i loved it in 2d Di....warts and all...(didn't think it was carey mulligans finest hour and the script a wee bit disappointing somehow) but loved the extravagance and of course leo. maybe not as good as moulin but a must see at the cinema.....and matthew bourne, only seen once , the nutcracker but the girls have never forgotten how magical it was...

I've never read the book nor seen the film but from what I hear it's got to be done. Thanks for the recommendation and glad you enjoyed it.
Patricia x