Last night, I was lucky enough to grab 2 tickets for Pete McKee's "one night only" viewing of his latest collection - Teenage Kicks.

My sister accompanied me as hubby was working. I had applied for the tickets, but we had to wait until late in the week to find out where the secret location was - which made it more exciting!! The venue was in a new arty area of Sheffield - Sylvester Street - where they have converted old cutlery making workshops into art spaces. We loved the venue.

Pete is a really lovely chap with a great distinctive personal and artistic style. He has done quite a lot of work with the designer Paul Smith and I think that is where this collection sprung from. He recently took the collection to Japan in conjunction with Paul Smith. The Paul Smith T shirts and bags look amazing - I'm hoping they get them in TK MAXX!!!! 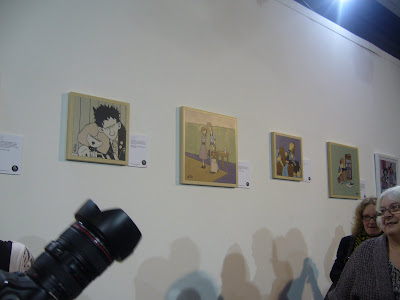 The theme behind the collection is the link between fashion and music for teenagers and how your taste in music influences teenage style. The pictures depicted styles dating from the Teddy Boy era to present day - with humour in each piece. 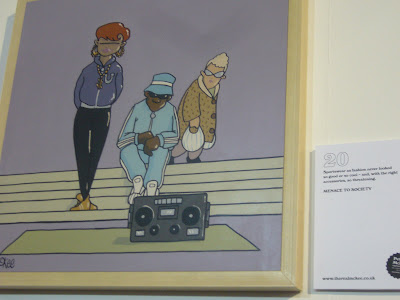 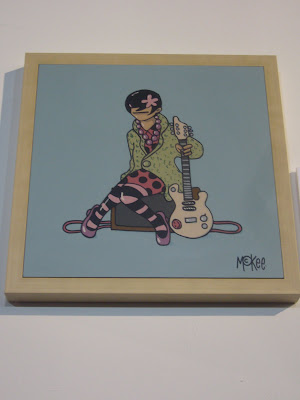 A DJ played music from these same era's, and the evening was round was rounded off by some great music from the band that Pete plays in called "The Everley Pregnant Brothers". They are a Eukelele band and play well know tunes, with words slightly altered to make them a bit more "northern" and very funny. "No oven no pies" was hilarious and was sung to the tune of "No woman no cry". The band also features Toby Foster who you may remember from "Phoenix Nights" (he played the drummer in LesAlanos). He is also a local DJ (once played a tune for the young man and I on our way to school!) and Comedian. 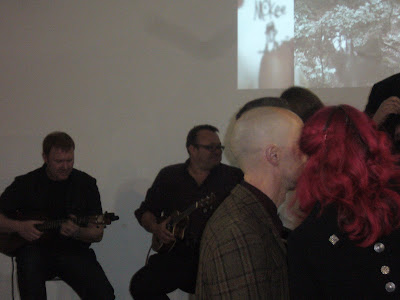 We also spotted another "celeb" - Phil Oakey of Human League, but I couldn't get a photo without looking a bit of an idiot!
We had a great night - really different. Pete is opening a gallery soon on Sharrow Vale Road in Sheffield, so of course I shall be taking you there for an outing.
Posted by Diane at Saturday, May 01, 2010

Thank you for sharing! I have seen this artists work around but never knew who it was! It looks like it was a good night!
Where abouts do you live? I am not too far from Sharrow Vale :)

You're not only a great tourist guide..but also a clever art critic! Enjoy the rest of your long weekend! xxxxxx

Phil has no hair left at all Lyn, but he is a lovely looking fella and very very slim. My sis couldnt get over his exceptionally small bottom!

Looks like a super exhibition - glad you had a great time! I was wondering about Phil Oakey's curtain of hair over one eye:)

ooh looks fab ! I was a Human League fan - used to dance like the girls ! Hair loss comes to all even Phil the frindge !
( my daughter had a fab long over her eyes frindge til last week when a friend's home hairdreser cut it off ! There were nearly tears - )

You really do go to some wonderful events,looks like a good time was had by all :-) I'm quite partial to a bit of ukelele music, especially as it's usually accompanying a funny song!

Oh Human League, loved them!
And Teenage Kicks, what a great song that is too.
Glad you had a great night out.
Lisa x