Some times when the weather is bad in St Ives, a little further down towards the end of England, there is a chance of a better day, and on Bank Holiday Monday that was certainly the case. We ventured down for a walk from Sennen Cove to Lands End.
By the time we got to Sennen Cove, Grey had turned to very very Blue. 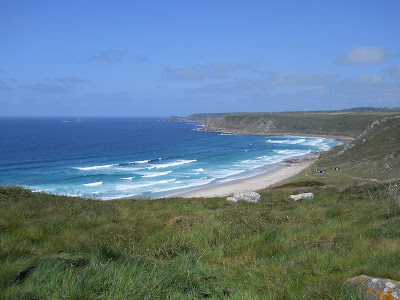 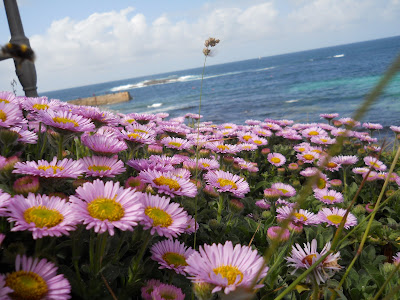 We discovered that the Lifeboat was about to launch - purely for practice, it was an awsome site. 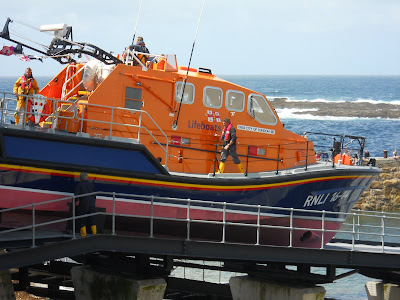 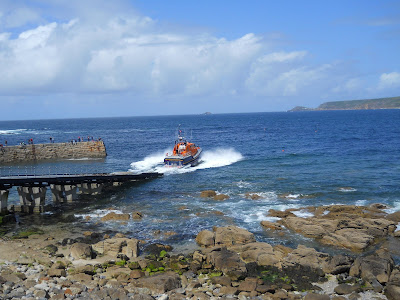 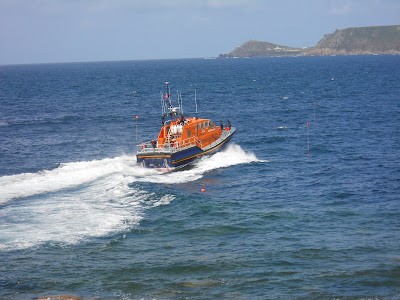 Sennen Cove is always a must visit place for me. I feel that I have stepped backed to 1950's Britain in a good way here. Its like the loveliest place that time forgot. 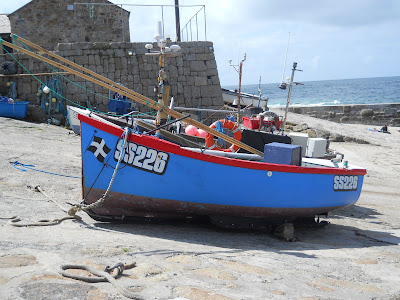 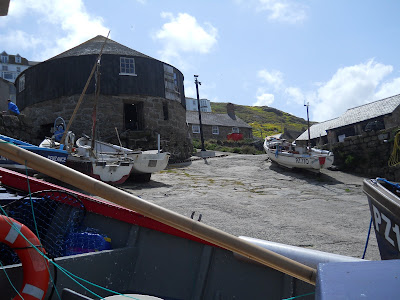 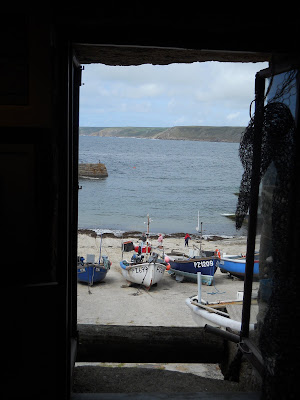 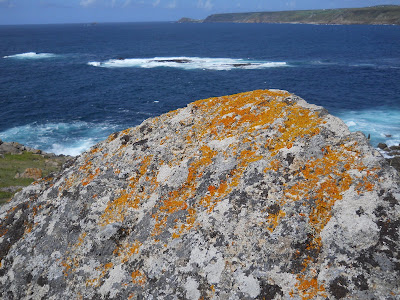 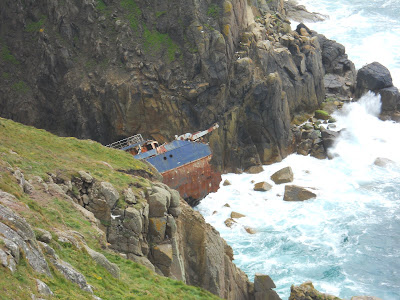 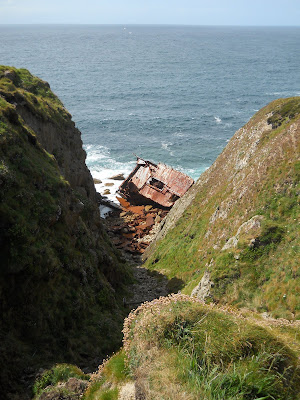 The walk over to Lands End is really spectacular with views over to the Isles of Scilly and the various Lighthouses that still protect sailors from the treacherous rocks around here. 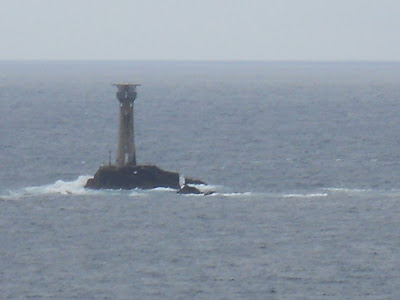 On arriving at Lands end, we saw that we were actually 377 miles from Sheffield!! Did they know we were here? 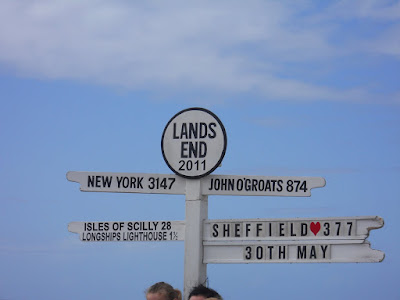 Hubby also discovered that a group of "Morgan" car enthusiasts were doing a Lands End to John O'Groats run. Now Morgan's have been my fave cars since I first discovered them in 1979 - when they cost £3000 to buy and had a 7 year waiting list for a new one. I should have bought one as it would have been worth about £40,000 now. 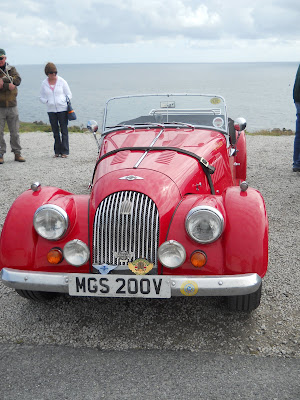 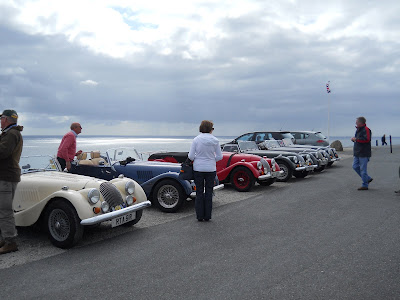 A very kind chap, sensing my excitement, let me sit in his. 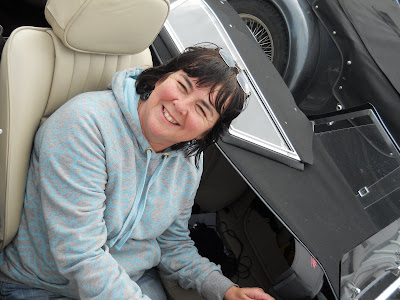 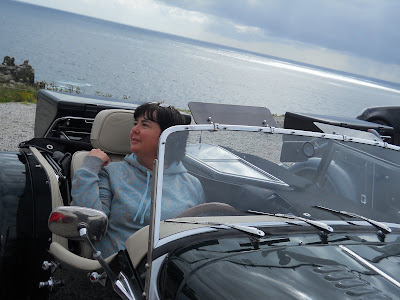 There had been a bike ride to Lands End in aid of a Breast Cancer Awareness Charity www.copafeel.org - the ride had been called "Bikin4Boobies" Most of the riders were in fancy dress. 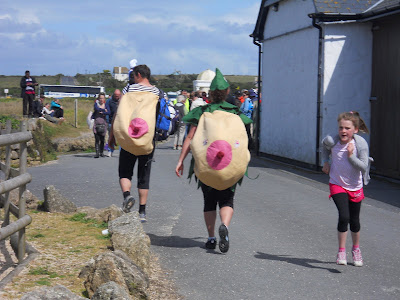 They had also arranged a little free concert at the end of the ride, and we spotted one of my favourite singers Newton Faulkner who was going to be playing later that evening. I came over all "13" and daren't ask if I could have a photo taken with him, so I sneaked one of someone braver than me! 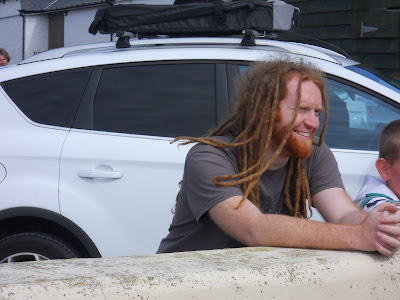 If ever I decide to leave my oldy baldy bloke and take a young lover, I shall go for a fella with dreadlocks next I think.
My menfolk didn't want to hang around for a few hours so that I could hear him sing (this will cost hubby dearly as I will insist he pays to take me to a concert instead!), so I'll leave you with one of his great tunes.
All in all, an amazing day that couldn't have been planned better - not bad for a plan B day.
Posted by Diane at Sunday, June 05, 2011

love this guy Diane....thanks for the intro.....looks like another fab time in one of your favourite places.....have the English tourist board come knocking yet.....you are a great ambassador for the delights of blighty! x

It's amazing how the weather can be so different a little further south. Looks like you had a wonderful day.

What a fabulous day out you had !enjoyed the video-now I`am a fan !

19 stunning pictures done and dusted, awaiting for the remaining 481!!!!
xxxx

ahh, Sennen is one of my most favourite places in the world! We used to stay at a cottage opposite the lifeboat house and it was always so exciting to the the men work there and see what they do!
I adore that walk to Lands End, the sea is always so beautiful and recently it has been filled with basking sharks!
Looks like you had a wonderful time! x

Diane how have you managed to post - twice. I am surroundered by washing etc. Have just got up, still in my nighty eating my porridge and you are obviously up to date with everything. I can however announce that I have indeed seen Newton Faulkner live at a gig at The Plug in good old Sheff. ha ha. Oh and I took about 3 photos. Fail. HAd a great time though. Didnt go to Sennen this time although the girl's did Belle lost her ipod on the beach. Eeek. Not a good thing for an ipod obsessed 14 year old to do. She has however made a big list of jobs she can do to make the money to buy a new one bless her. She didn't stop either.

I dont think I've ever been to sennen cove.

I would never put you and dreadlocks together!

I love Newton Faulkner too!

Fab photos, I look forward to seeing more of them soon!

That's a pretty amazing plan B day. Read all about it whilst listening to the music:) I just want to be there now:)

I think the smile on your face says it all x

Pretty good plan A day I would have thought.

I love newton faulkner, his version of teardrops is fantastic - it is on of my all time favourite songs x

Another Plan b day that was a triumph!
So much happened in one day of your hols!
Looking forward to seeing and reading about more.
The blue in the top photo just says summer.
Lisa x

Love this Newton man (not the dreadlocks though), I'd never heard of him before so thank you for that. I love Sennen, it's so barren and wild there so perfect for blowing the cobwebs. Glad you had some blue sky!

funny we watched the lifeboat being launched in llandudno in a similar way last night!

loved the pic of you in the car... your inner child was showing!!!!

How happy do you look, sitting in your dream car at Lands End Diane?

I don't believe I've heard Newton Faulkner before and love the song you have featured on this post - great voice. x

looks like you had another great day out. love your photos.

Can't believe I forgot you were down this way - sorry (embarrassed)
I also can't believe you got to see Newton Faulkner - I like his music too!
Glad you had a lovely time here!
Clare
xx

What a great day you had. I always wondered what Lands End looked like.

Places that time forgot are bliss when you find them. I enjoyed your photos and the music (I like him too...and the dreads!) I particularly love the photo (number 8) with the boat framed by the doorway. Very well composed. Lovely post.

Wow, I can't believe that's England. It's so beautiful by the coast, and I have always loved the ocean, if I were to hypothetically ever visit England, what should I see? Just need an opinion from a cool, rocking person like you, cuz you seem to be in the know about stuff, so what do you think I should see if I ever get the chance to visit England? If you want to send me an answer, here's my email- hughjackman18@yahoo.com, don't ask, my dad set it up, lol:)

What lovely photos! I love Morgans too. Haven't been to Cornwall for ages - must start planning a trip.

Get you and your fab 'arty' photos!

It'd have to be a bloke with an afro for me - the bigger the better too (tho he'd have to have nice teeth - that's a deal breaker for me) :0)

What an absolutely beautiful place Sennen Cove is! I'd love to go there for a few days. The Morgan cars are fabulous aren't they? Lucky you getting to sit in one.

Fantastic photos, what a great day it turned out to be.