Salmon Fishing in the Don

I was invited by email (totally out of the blue - I think someone must have read my blog!) to attend an event nearby highlighting plans that Yorkshire Water and The Environment Agency have the the River Don.  My email said "to someone who has an interest in the local area" and I do love a walk along the Don.  I missed a lot of the talk that they were doing, and I couldn't stay for the later one, but I gathered from the latter end of the talk that Salmon are now returning up the Don from the North Sea and trying to spawn, but the chemical composition of the river water (because of what is currently poured into it still) is not conducive for spawning.  They are aiming to remedy this.  I think that this is very exciting! 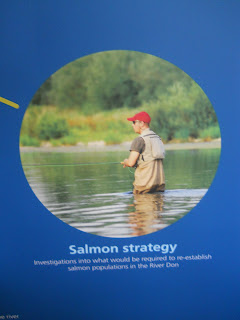 Salmon used to swim in the Don, and one area very near the city is called "Salmon Pastures", but years of pollution by the Steel industry saw the wildlife die off.  Readers of my blog will know that wildlife has returned in abundance, but there is still a fair way to go with cleaning up the river. 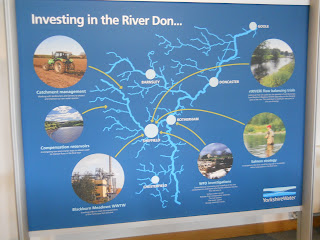 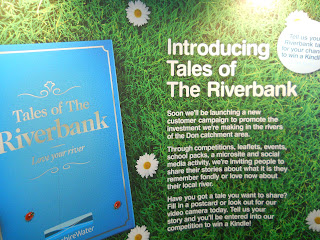 It was fabulous to read the information by different bodies and see what volunteer groups get up to.  I brought away some reading matter and we are going to volunteer for some of the events. 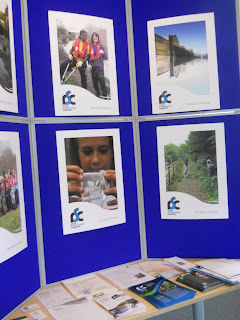 Refreshments were served.  We are really lucky here in Yorkshire to have beautiful fresh water supplies so near.  I once worked with a water company in the south who pumped their water straight from the Thames. The pumps were often halted as bodies (suicides) blocked them up!!!  The water was allowed to settle in a tank, then pumped into another tank.  That process was repeated a few time, and then several million £'s worth of chemicals.  The water was blue.  Ours is very clear! 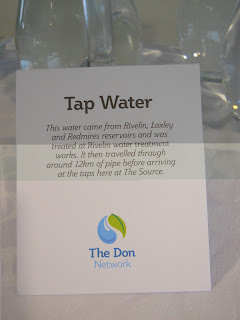 We were served mini Yorkshire puddings with beef and some very tasty cupcakes made locally by "Fancie". 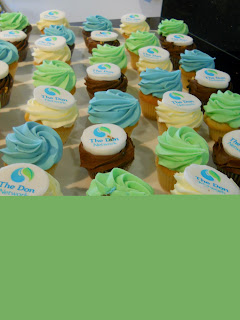 It was a very thought provoking event and I can't wait to wade in and help with the clean up.  It's amazing where a blog can lead you.
Posted by Diane at Friday, June 22, 2012

You must have felt like a celebrity,good on you, loved the small cakes, pleased they served up beef & not salmon, x

What a marvellous thing to be involved in, do keep us up to date on what you get to do.

It would be fantastic to have salmon spawning in teh River Don - I confess I was amazed to find that they are even trying! Hope you'll keep us posted about what's going on.

That's fantastic! The River Don was a filthy river when I was a child.

I'd get cleaning for a Fancie.....
You do get up to some interesting things Mrs!

How amazing! If I were younger I'd be in a river cleaning it up, too! I look forward to more Tales of the River Bank!

I'm not sure I like the idea of blue icing!!

Sounds interesting! They probably found you after you did those posts about the waterways in and under Sheffield or possibly your canal walks. Hope you enjoy your volunteering. Like Gilly (above) I can see why they have chosen the blue and green icing to match their logo but I don't think I could eat it:)

How fab!! Let me know when it is...will try and come along with you!

Always nice to be invited to something

How wonderful, I may have to ask for your autograph! Your famous now.. :)

Oh yes, I echo the other ladies, you're a true celebrity..how could they not invite you??? :)
xxxxx

Keep us updated wont you, I want to see you in your waders, actually you may need those when you come down in August!!!! See you then. Thanks for the comment over at mine!! Oh, its sunny today!!

How interesting Diane - great that you got invited (and were able to report on the refreshments again...I spot a trend!). Good to hear the Don is getting cleaned up - there may still be bodies in the Thames occasionally but it has improved hugely in the last 20 years. Maybe you can get David Walliams to swim the Don in a year or two!...xx

I loved how you seamlessly went from body clogging pipes to cupcakes!! From the grim (very!) to the sublime...they looked rather fab indeed!