So my baby has turned Eighteen - where do the years go! He has turned from a teeny tiny little munchkin.... 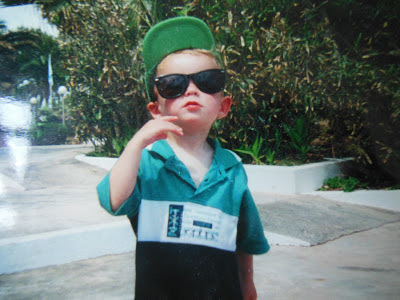 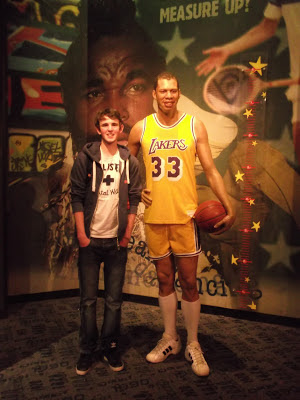 The girl who made his cake did herself proud.  She said it was the hardest cake she has ever made!!  The story is that when we were in the Nike shop on the Champs Elysee, he saw this fabulous pair of "Air Jordans" (basketball shoes) and he desperately wanted them.  He pestered and pestered, but they were well above £100 and I don't usually cave in, but we were in Paris and I caved.  But he was crushed when the shop assistant told him they were not for sale - they could be ordered, but not bought.  Earlier this year, he went to New York with his girlfriend and found the much desired shoes but at a much reduced price - he was over the moon.  So I decided that they would make a fab subject for a cake.  He loves it. 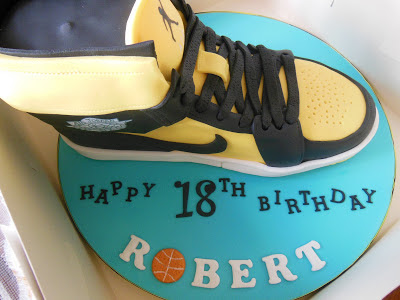 End of an era, beginning of a new one! Happy birthday to your big boy.

Haooy Birthday to Robert. A great deal of effort went into making that cake - it's amazing.
June

ah! doesn't it just whizz by?..fantastic cake he will be thrilled....my girl is 21 very soon,cannot believe it.... enjoy the celebrations! x

Happy birthday to Robert, hope you have a lovely evening.

Happy birthday to your boy. Scary how quick they grow up!

You're right time does fly by. Happy birthday to Robert
Patricia x

I know what you mean. I blinked and now have an almost 24 year old baby. Love that cake!

What a great cake! Jx

Awww, Happy Birthday to him. He is very handsome. He looks like a nice guy too :D

Many, many happy birthday wishes to your lovely boy.
I hope you all have a wonderful time celebrating such an important day.
Lisa x

Oooo 18 is proper grown up,but he'll always be your baby!! Happy Birthday to your lovely boy and that is a super cake.
Twiggy x

Congratulations Robert!
What a fab cake.

Happy Birthday to Robert - what a fab cake! I wouldn't want to cut into it:)

Congratulations to your young man! My baby's going to be 21 in August, and he's a bit lazy too (and a whole lot untidy!) The cake is wonderful.
Kathy x

What a handsome son you have, Diane. Happy (belated) birthday wishes to him.
Great cake. xxxx
PS - hope all's well with you. x