I discovered by accident that they have some great events happening at the Manor Lodge Discovery Centre in Sheffield, and so on Monday night I decided to try the "Last of the Little Mesters" talk by Peter Machan.  I learned so much!  Peter is a retired headmaster who now works at Sheffield Manor and has a great interest in historical Sheffield - especially the cutlery trade. Did you know that Sheffield was once famous for cutlery making as well as steel?   His father had worked for one of the big blade making companies.  The "Little Mesters" (or masters) were almost all self employed craftsmen who worked in the many hundreds of workshops built right in the city centre - of which many still remain - empty or repurposed usually.  A fair few have been turned into nightclubs and bars or student housing.  Only a handful of these craftsmen remain today - most in their late 80's. 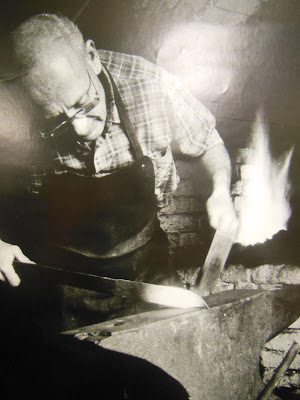 Peter had been photographing the Little Mesters at work from the mid 1970's to the mid 1980's when all the bigger cutlery companies eventually went out of business.  I remember the first time I saw "Made in Taiwan" on cutlery and thought it looked very strange.  When the businesses closed down, Peter went skip diving as they cleared the premises and now is custodian of some historically important photographs, ledgers and other artifacts that would have otherwise ended up as landfill.  He was also bequeathed some amazing pieces (like the one below) when many of the lovely chaps in his photographs died.  Close up, they are amazing works of art.  It struck me when he was showing the pictures, and telling the stories, that this "history" was very much in my lifetime.  Whilst it makes me feel ancient, it also makes me very proud to have been living in the city when this industry was still alive.  Peter's talk was very humorous, enlightening but also very very moving.  The cutlers of Sheffield were ordinary working people, but with extraordinary talent and skills - so very underrated as well as underpaid. He also touched on the associated trades, like the men who made the stamps for the blades and the women who acid etched the names on them. 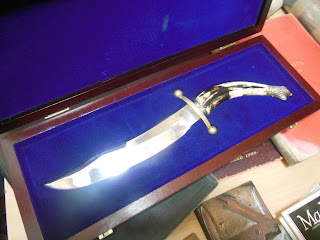 I learnt that the official (and this is real!) job title for the chap who put the left and right handed parts of scissors together was a "Scissor puter togetherer".  That the term "buff" (The buffer girls polished the blades till they shone) comes from the fact that they used neck leather from Buffalo's to do this.  And much much more.  Peter's talk (and he also writes a lot of books on the subject) was a great testimony to the men and women of Sheffield who worked extremely hard in poor conditions but sent a marvellous little piece of Sheffield  to every far flung corner of the world.

If you are local, the Portland Works is open on the Heritage Open Day weekend on the 15th September and you can see one of the remaining Little Mesters in his workshop on that day.  It is a fascinating place to look around and I know you will love it.
Posted by Diane at Tuesday, September 03, 2013

That sounds brilliant, Diane. I have a penchant for rummaging through old cutlery when I see it in charity shops and picking out older pieces marked Sheffield, and also have a few silver plate pieces made here. I have a nerdy love of checking out the makers marks! There is a great cutlery stall on Chesterfiled market, by the way, you'd love it.
I do agree it's a little alarming when one's own memories become "history" but it happens to us all, in time! xxxx

A couple of years ago, I bought my husband a pocket knife made by Trevor Ablett, a 'little mester. Trouble is, it is *so* perfect, he keeps it 'for best'. I also bought new dressmaking scissors made by Kutrite - one of only two remaining Sheffield scissor makers. We both get an enormous amount of pleasure and satisfaction from owning and using something so beautifully made and fit for purpose - and still being made just up the A53 :-)

Always good to learn more about your 'doorstep' history.

That sounds like a really fascinating evening.
I like finding out the history of words too.
Lisa x

Sounds like a fascinating talk, Diane and it looks as if there are lots of other interesting events coming up too:)

It must have been interesting to discover so many quirky things about the industry. Jx

Have you been in the Cutler's Hall-there are some wonderful pieces in there. Must try and get to some of the things at Manor Lodge especially the David Hey talk.