Like most towns and city's around the UK, in Sheffield we are telling local tales from World War 1 with it being the 100th Anniversary this year.  Weston Park Museum has dedicated a room to exhibiting artifacts and stories about how the war affected the city and local people.  One of my favourite stories (and one I didn't know) is the one about Lizzie Ward.  As we all know, most horses were rounded up and sent to France for the war effort, leaving a huge shortage of working horses back here in the UK.   Likewise, a local travelling circus found their business curtailed because of the war with most of it's young men sent away and restrictions on travelling around the country, and so Thomas Ward approached Sedgwicks Menagerie  and managed to secure the services of a magnificent but docile Elephant to help pull his waggon's for him.  And so Lizzie Ward became a regular sight on the streets on Sheffield. 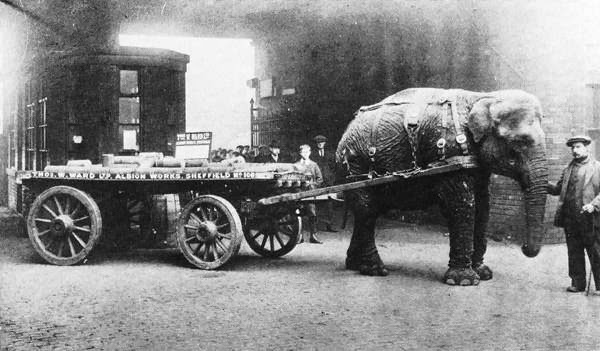 We are nothing if not resourceful here in Sheffield!    Read the story here.
Posted by Diane at Sunday, March 02, 2014

Well when I say SHE was on, I mean a bit of rare footage and her story was on Look North! X

What a lovely story, and one I didn't know either.
People often forget the plight of animals during WW1. The loss of horses was enormous and what a terrifying ordeal war must have been for them too, snatched from rural England and sent abroad.
I also wonder what happened to the remaining circus animals, if they no longer had a "job".

What a wonderful story - thanks for sharing it. I love the fact that a Sheffield bus has been named Lizzie Ward:)

Wonderful story! But how did the keepers get such neat lines across her skin???

I too feel so much for the plight of horses in the First World War. Stuck in mud, frightened by gunfire, it just doesn't bear thinking about.

What an amazing story ... and photo!

Wow, that really is an unusual sight!
Local history can turn up some interesting thins.
Lisa x

What a great story - I'm impressed. Infact, I've stolen the picture so that I can impress my friend elsewhere with it.

I've never been to Sheffield but I'm slowly quartering the country and got to Leeds last weekend, so Sheffield can't be that far away - I shall watch out for the bus named after Lizzie.