My husband is the sort of man who can fix anything - as long as it can be fixed with "Gaffer" tape. It is an essential part of our camping gear, and is used widely around the house and garden. He recently discovered that the father of one of the young man's friends had never owned any, and he now considers him a lesser man! He was thrilled to see it so widely used in Paris (although I think this was parcel tape). Now that's what he calls "fixed". 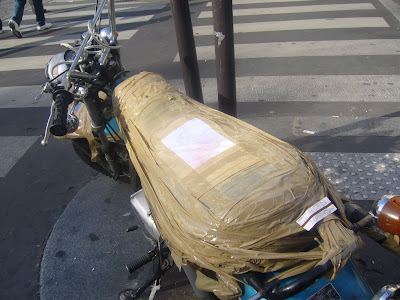 umm, mine uses bits of chord !

thanks for your comment - my teens will be 14 & 17 soon... and I have a much loved copy of The Night Before Christmas !

I always let them open a present on Christmas eve - it was either new jammies or a lovely Christmas themed story book. Clever me ... it got them into bed !!!

Have a lovely weekend.

Have a lovely weekend,

It's tape and balls of string here! I wonder how many rolls of tape it took to cover that:) Hope you are having a good weekend:)

Bet your husband is delighted with this post and the fame its brought him. Very funny.

Quality repair! Tee hee, a man after my own heart!

Have a great weekend Dians, hope you get a chance to get out and walk like you wanted....

My DH uses superglue for everything! The bike is certainly well wrapped up!