We have just returned from a romantic week for four in Paris - which was part of hubby and I's joint birthday trip (he is 50 in March). We didn't think that we would be able to get away for our birthdays as I keep getting emails etc at work threatening redundancy and with the general way the "credit crunch" is panning out, but in true Diane fashion, I was able to find us a fabulous deal - thanks to the French love of "Le Camping"!! We stayed on a campsite on an island in the middle of the Seine in the affluent suburb of Maisons Laffitte courtesy of Eurocamp in a lovely little static caravan (well equipped and spotlessly clean, but don't bring your cat to swing!!)that cost £200 all in, including the ferry from Dover to Calais!! I reckon that the savings made on wine brought back more than pays for this jaunt!!
Maisons Laffitte was lovely complete with its own Chateau in the middle of town and a handy 20 minute train ride which dropped us off right outside the Arc de Triumphe. I won't bore you with the several hundred photo's that I took, but to get the general flavour:
The Chateau in Maisons Laffitte - the area is famous for Horse Racing (apparently) and several horses were being exercised in the park when we looked around. The houses were all stunning and the little school looked like the one in "Madeleine". It is a lovley area and I would stay there again without hesitation. 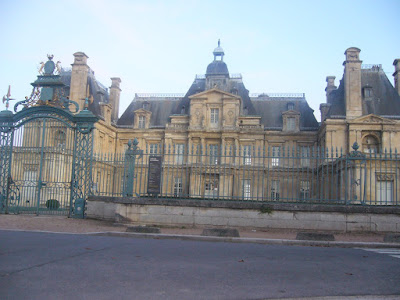 We emerged from the train by the side of the Arc de Triomphe. We explored around here - I had forgotten about the eternal flame at the Tomb of the unknown soldier, and this brought a tear to my eye. 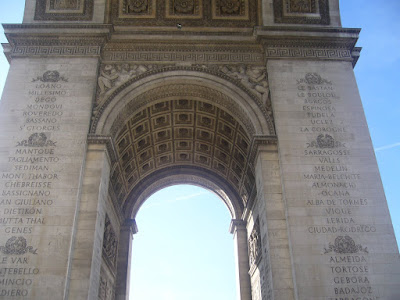 From the top, we were able to see the the Grande Arche at La Defence - amazing. 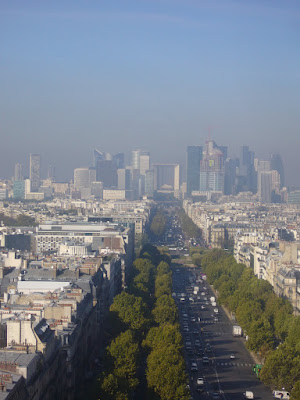 We walked down the Champs Elysee (which took forever as the kids could not resist a look around the amazing shops on here) - we crossed at the Place de la Concorde and ended up at the Louvre. I had forgotten the immense scale of the old building and the architecture and stone masonry were so spectacular. We didn't go in on this day , but we did the day after - more of that later. 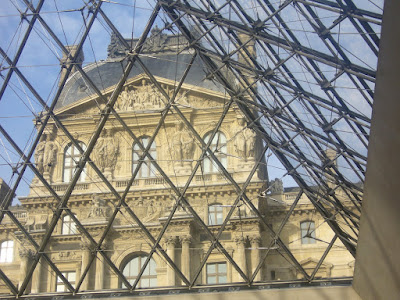 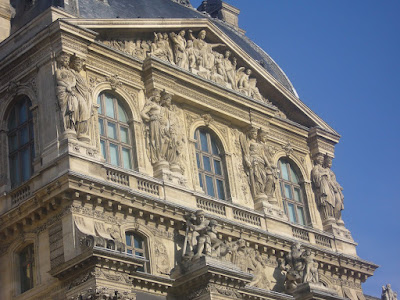 We bobbed across to the Isle de la Cite and visited Notre Dame. As you can see, we had the best weather ever - it was sunny and very hot! 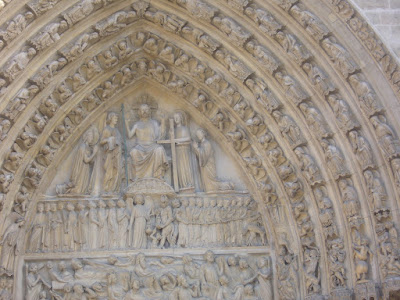 We sat for a while in Notre Dame. I had decided that the only way to get around was to walk so we didn't use the Metro at all. 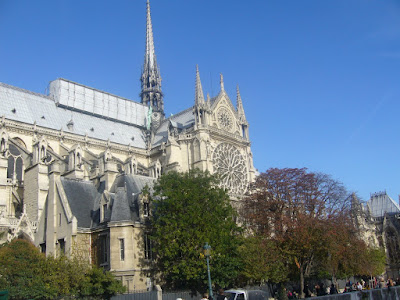 One of the highlights of the trip was when they switched on the twinkly lights on the Eiffel Tower, just as we were catching our breath. Priceless and a perfect end to the first full day in Paris. 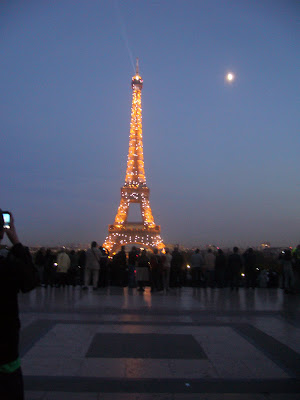 You lucky thing, Paris is a fabulous city and those blue skies, beats a wet day in Scotland.

Thank you so much Diane for sharing part 1 of your lovely holiday, I've got such happy memories de la Ville Lumière!
I will go again with my next boyfriend (when I'll find one, of course!)
Now tell the truth! You went there for the Tour Eiffel anniversary! I could only admire the lights show on the news :(

Welcome back Diane! What a lovely trip, i have some lovely memories of lots of trips to Paris. Its so beautiful. What a lovely photo of the tower. x x x x x

Wow looks fantastic.
thanks for popping over, we to had a fantastic time and we would love to move to the peak district hubby just has to find a job.

Wow! looks like you had amazing fuuun! and btw 'Dancing Queen' told me about her little blonde moment, "wheres the Eiffle Tower?!" ... "you're stood right under it!" ahhhh what a legend she is!

anywayy glad you had an amazing time :)

walter and me said...

Lovely! I adore Paris...it's been far too long since i hopped over the channel.

Hello Diane!
It looks like you had great weather for your trip! And what a bargain you found for your accommodation too.
I can't wait to find out more about your travels, it all looks amazing.
Happy days
Denise x

Great pictures, you look to have had a wonderful time.... and I laughed when I read the comment by Daniel Phung, you see my other half and I went to London a few years ago and he said: "Oh look, there's a Big Wheel".... It was the LONDON EYE!!!!!!!!

Paris looks fantastic, great photos. Its on my dream list of places to visit x

Ah, wonderful - what is it about Paris? I want to go again even more now I've seen your photos - looking forward to Part 2 :)

Well done, that was very impressive bargain hunting - I might have to hire you to find me a holiday next year!!

I've only been to Paris once before and I was 7 so I don't think I really appreciated it - would love to go back again, I'll give you a call when I want to go and you can find me a good deal!

Your photos bring back happy memories for me of my visit to Paris ten years ago...I can't believe it is that long since I last went there! It is a beautiful city and you seem to have been lucky with the weather. I hope your break helped you forget about your redundancy threats, for a little while at least.
Susie

Love the last picture of the tower all lit up - must have been beautiful.

I haven't been to Paris since Inter-railing in 1991 (showing my age!)

What an evocative account - can't wait for the next installment. I adore Paris and you have made me want to go again too! We have airmiles and keep talking about spending them on somewhere new or different but I bet you your last franc it will be Paris again (I know it's euros but still...)

I wondered where you'd got to! And it is Paris no less! And a bargain trip too.
Love the twinkly photo of the Eiffel tower. Can't wait to see the next instalment.
Lisa x

Your paris photos are beautiful - they remind me of my own trip! Thanks for the lovely comments you left on my blog. Sorry I've taken so long to reply I've only just found them - blogger failed to send me an email to let me know they were there!