Here in Sheffield, we hold the best music festival in Britain - because it is FREE! I think that this is the 3rd year that TRAMLINES has run - and this year its bigger and better than ever. The city has hundreds of pop up stages and music venues and every one of them is free. Hubby was in town for a colleagues leaving party straight from work, so I said that the DQ and I would pick him up and take a listen to who ever was playing at one of the many stages that are dotted around the city this weekend. Its a very civilised idea for a music festival - what you save on buying tickets, you can spend on a hotel room instead of camping in a muddy field! I took one look at the many bands playing - and spotted one that I knew!!!! So off we toddled.
We had a nosey in the Millenium Galleries as it was "buzzing". They had a rock band on (they were really loud, and semi clad!). The 2 girls obviously on a hen night made me laugh. 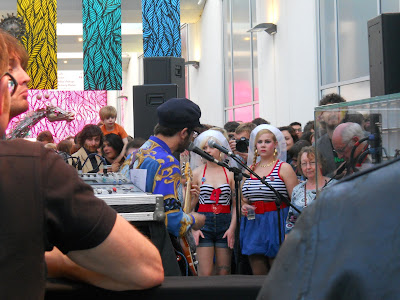 Nothing to do with music, but I snapped away anyway - The Heeley art group have some fantastic art work displayed in the Winter Gardens - these were 2 of my favourites. 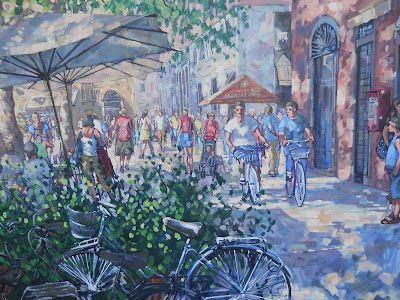 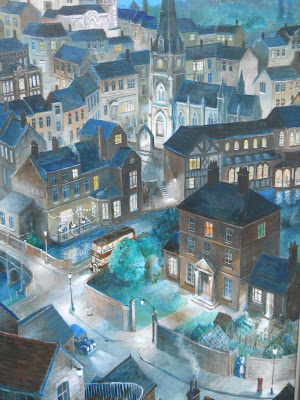 and on to our venue - via the front of the town hall where we spotted the latest addition to the Sheffield Hall of fame. 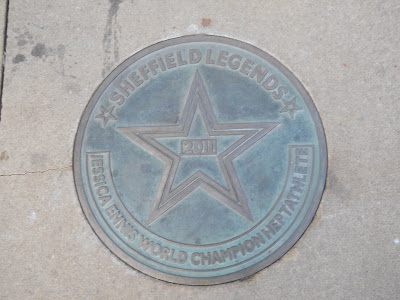 Our target venue was a stage in Barkers Pool - between the city hall and John Lewis. It was a great atmosphere and lovely to see so many people in the city on a Friday evening having a great time. 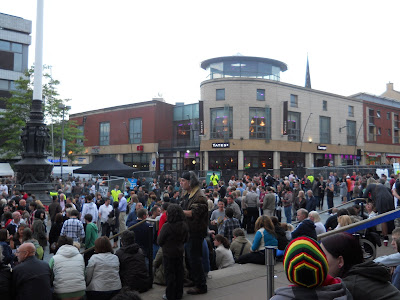 And then they came on - and I was instantly transported back to the early 80's - and Josephines night club - also in Barkers Pool. (Tucked away in the corner). Yes the act we had come to see was Heaven 17. And they were Brilliant. One of Sheffields home grown bands. And we oldies danced away around our imaginary handbags once more!!
The festival is on all weekends, and I'm hoping to catch the "Buskers Bus" at some stage as it looks good fun.
Posted by Diane at Friday, July 22, 2011

Sounds like a wonderful idea! And I love the two paintings.

Result! Did they just as cool or just plain silly? Those were the days ..

Oh Heaven 17! I liked them too. What a fab way to spend your evening.
Hope the rest of the festival is just as enjoyable.
Lisa x

This brought a smile to my face - perhaps its where you dancing quenn gets her genes from ??!

Hubby went but I was feeling a bit under the weather. We are heading into town today though - wonder who we might see. Love the second painting was it by someone called Lockwood. I think I met him at Art in the Park last year his work was amazing. I will take my St Ives bag as id so if you see me dancing around it give us a shout. (do you say dancing or darnce - like southerners - we ike to say darnce just for a laugh - as in we expresss ourselves through the medium of darnce - I could do a demo when we meet. You will laugh a lot as I darnce like an efalump. Going now hitting the Charitee shops then a spot of musak.

Looks like loads of fun going on in Sheffield right now. Good for you getting into it with the young ones. Unfortunately I can't be bothered going to concerts any more but I still do mad things like rubber rafting down the rapids in Cody, USA.

Sounds like a great time was had by all! I think I remember a couple of Heaven 17 songs! I love the second painting - it's wonderful, do you know whose work it is? I see from his Twitter page that one of my favourite singers is at Tramlines today:)

What a wonderful way to spend a weekend. My musical memories of Sheffield are the Esquire Club in the 60's - bands included Dave Berry, Kinks, Pretty Things, etc also in the 60's - Joan Baez at the City Hall and Runrig there in the 90's. Carol xx

Sounds like a great event, and even better having groups on from the 80s. The paintings are wonderful.

That looks like great fun. My sister lived in Sheffield for a several years. I loved visiting her there!x