When I was a child, I would spend the October school holidays "potato picking" for the farmer in our village - in fact the October holidays were always called "Tatie Picking Week". Let me tell you, I don't know how I used to manage a week. Yesterday the hubby and I emptied this sorry looking receptacle out onto to the garden to reveal.... 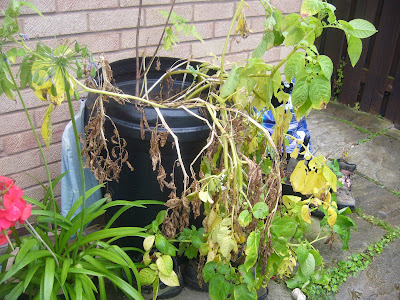 ... this basin of beauties. We both complained of bad backs throughout the harvesting!!! (old age!!). Don't ask me what type they are - I just remember some spuds sprouting in the cupboard, so we planted them. We cooked the first lot within 5 minutes of picking and they are delicious. We will be feasting on different potato recipes for the rest of the week!! 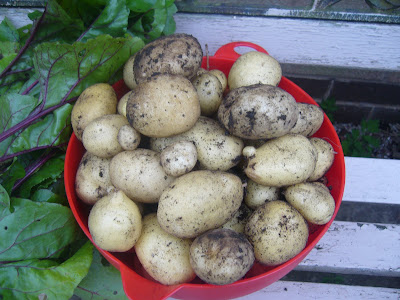 I also grew these in a corner of the garden too. I never liked beetroot when I was a kid, then in my twenties, my Grandad (who was in his 80's at the time) made me a ham and beetroot sandwich and I didn't have the heart to tell him I didn't like it, so I ate it and discovered that I loved it!! I thought about my Grandad this evening. He died when he was 93 years old. He was a woodcutter and a big strapping chap - but never fat and he only was ever ill once (he thought he was dying because he never realised how bad you felt when you were physically sick!!) He never had colds or any common ailments. He ate all the things that are supposed to be bad for you. He told me that when he was young, the youngest of 13 children, he was only allowed to eat the dripping from the meat - his older brothers who worked ate the meat. He still loved dripping in his older age - often frying his bacon in it, then pouring it onto his plate to mop up with bread. He loved butter too - and spread it very thickly on thick sliced bread. I went to the cinema to see "Julie and Julia" and at the end of the film it said that Julia and her husband both died in their 90's. She used tons of butter in her cooking. It made me smile.
Its a lovely film - I love Nora Ephron films (except "Bewitched" which I can only describe as lack lustre). She certainly knows how to "style" a movie. The scenes in France are an utter delight. I'm all fired up to get back into the kitchen now autumn is here - so much for the diet!

Sounds like my old grandad .... I remember going into their old scullery (that's what they called it then ... the only fitted bit was a sink with cold tap on the wall and a gas water heater) to find a pig's head staring at me .... grandad was going to make brawn which is something I've never tried. All my grandparents ate lard, dripping, salt,fry ups and all the other things that are supposed to be bad for us but they managed to survive until their late eighties with very few health problems.

Ilove Nora Ephron films too. My all time fave is "You've Got Mail" - I've seen it hundreds of times!!

I am in awe of your wonderful veggie patch especially the potatoes which look wonderful. I hope they taste as good as they look

ah, round to yours then for beetroot sandwiches with lashings of butter, ooh i love it !

Thanks Diane for the tip about the shop in Haworth - will definately seek it out next week.

Really pleased to hear your view on the 'Julie & Julia' film as I fancied seeing that - I think Meryl Streep is ab fab, so that's a must see now.

Lovely story about your grandad. I think if folks are born with a certain constitution, they can eat/drink whatever they like without ill effects. My dad is 82 and he smoked from a very young age until in his 70's, is very overweight and eats fried food all the time - there's not much point in him worrying about it now at 82!! :0)

I really want to go and see Julie & Julia - saw Nora Ephron on BBC News yesterday and then saw a preview for it last night when I was at the cinema. Main problem is going to find someone to go and see it with me!

What a great harvest, I'm very impressed with your spuds!

A great harvest and all those taties!!

That's a really good harvest of taters from a bucket. My dad grows beetroot and then my mum pickles it. We then have beetroot with everything until it comes out of our ears! Then it starts all over again when the next crop is ready!
Great story about your grandad.

Wow, those potatoes look wonderful - ours haven't done very well this year. I saw a clip from that film on TV the other day it looks good - I really like Meryl Streep and also loved the films 'Sleepleas in Seattle' and 'You've Got Mail' so it looks like a must see film:) We also used to have 'tata picking week at junior school:) Yes,it is the Alton of Alton Towers and Buckler's Hard is on my 'want to visit' list:)

The older generation were made of tough stuff, I put it down to 2 world wars and rationing!

Nora Ehpron films are fab I quite agree.
And yes I love beetroot too, as long as it's pickled in sweet vinegar. And potoatoes I can only eat as crisps or chips. It took me 7 yrs into my marriage not to want to be sick everytime I made mashed potato, I have a real aversion to it which I put down to mean dinnerladies!
Lisa x

Those potatoes look lovely,a good haul from a few seed potatoes. My mum was just like your grandad, always loved bacon fat, dripping and lots of butter and she died at 88 from old age - no arthritis, heart trouble etc etc. She always used to say that you should eat a good varied diet and everything in moderation. Think she had it about right as did your grandad - mind you I think that generation worked a lot harder physically so they didn't pile the pounds on.

walter and me said...

Hope Julie & Julia makes it to Pz, so many good films never quite make it this far!

Grandads, they are the best aren't they? I remember so many little details about my Grandads, thanks for sharing yours, it has sent me off down a Lane I am very happy to travel :D
Sarah x

My grandfather was very old when he died and also did all the 'unhealthy' things including eating the fat off his steak (which used to horrify me as a child!!)... i must say, I like a bit of bacon dripping drizzeld over my bacon sandwich !! xx