A 10 minute drive out of Sheffield brings you to the Derwent Valley. The area around this side of Sheffield is covered with beautiful dams that are used for supplying drinking water to most of the midlands. On Saturday it was a perfect day for the long (13 mile) walk around the top 2 lakes in the valley - the Derwent and Hewden dams. Can you believe that this lies between Sheffield and Manchester - 2 of this county's most industrialised city's? 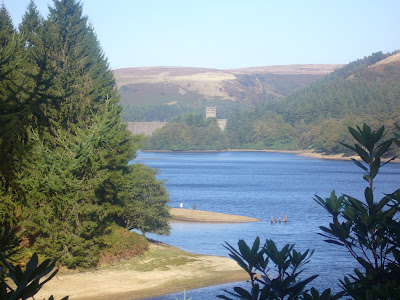 As you walk around, there are lots of tell tale signs of the town that was built to house the navvies who built the dams and their families. Apparantly, navvies could be very difficult to control, and letting them bring their family to live here had a big calming influence on them - except when they had been drinking. If you enlarge the picture below, you can read what happened to 2 of the landlords of the "canteen"!! 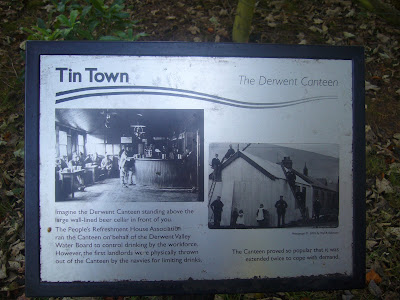 The dams were used by Barnes Wallace to help him develop the bouncing bomb in World War 2. You can get helicopter rides which fly you over the dams (playing the Dambusters Theme tune!!) from a nearby hotel. Whilst we were there, an old Dehavilland Dakota (I was reliably informed by my live in WW2 expert) came over the moors and flew down the valley - it looked brilliant and it made my day! We also got a fly-by by the Red Arrows - I just love it when the Red Arrows show up out of the blue!! 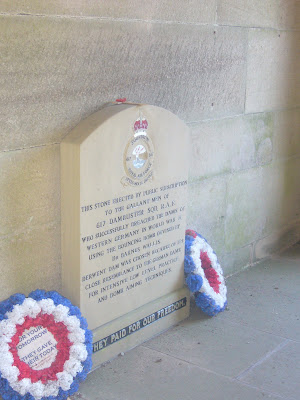 The scenery all around the dams is truly spectacular - and will look more so in a couple of weeks time when all the leaves turn golden. 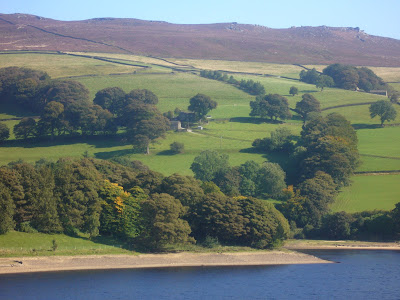 The water is faily low. I know some of you have had a lot of rain this year, but we seem to have missed it thankfully (after the deluge and floods of 2007 and 2008) 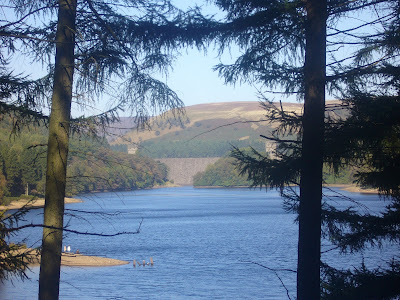 We had a great picnic spot, and stopped to paddle in one of the rivers that feeds the dams. 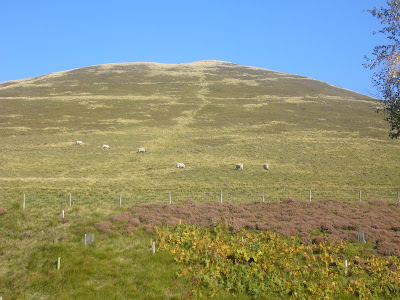 The sky was clear blue and the temperature was perfect for such a long spectacular walk. I couldn't think of any where I would rather be on such a great day. It felt like heaven. 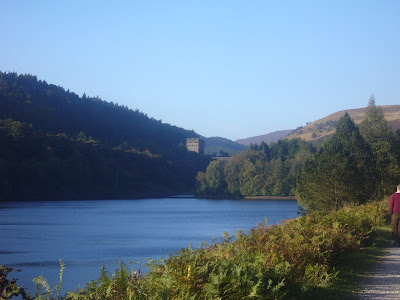 On Sunday we travelled north west to Preston to visit the University open day as it has a course that is of interest to the dancing queen. She fancy's doing Media Production so that she can work making TV programs - ideally for MTV. The Uni wasn't bad, and the course looked ok. The druggies and drunks that hung about between the halls of residence and the main campus were of great concern to me, as was the lecturer who gave us the talk and tour. He was head of the department and hubby said it looked and sounded like he had spent Saturday night on the real ale and smoking waccy baccy . He had nothing prepared and couldn't even work his PC or TV. Ah well, I hope that Salford inspires me more next week.
We finished at the Uni at 1.30pm, and as we were only 15 miles from Blackpool, I thought it might be a great idea to go and have a stroll along the prom prom prom, and then stay for the famous "Illuminations" which get switched on at 7.30pm.
Now I have some really lovely memories of Blackpool. When I was a little girl, we holiday'd there every year. I remember having great fun in the Pleasure Beach - seeing Cilla Black and Jimmy Clitheroe (so showing my age here!!!) at the end of the North Pier (every year that we went!!!), watching the ballroom dancing at the Tower Ballroom etc etc. I know that it went down hill rapidly when families decided to go to Spain instead in the early 1980's. I last went to Blackpool 20 years ago when hubby and I first got together, and whilst we did have a nice day then, it was turning into just a "Party Town" and not very appealing. Well, I can report that it has gotten much much worse. Its dire and dirty and crumbling and I couldn't find even one thing that I thought was remotely ok about the place. The young man thought we would have a problem killing time before the lights came on and he was right. We walked from the South Pier, up to the North Pier and back again and promptly got back in the car and went home. The young man said that you can tell how bad a place is when McDonalds looks like the best restaurant in town. The place is like hell. 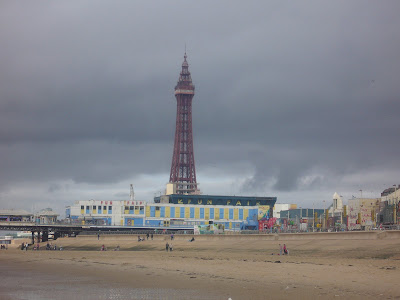 We did laugh at the amount of Hotels, Self Catering Flats etc that had the word "Luxury" in the description of their establishments when they clearly were anything but!
Posted by Diane at Monday, September 28, 2009

Ahhh, beautiful photos of beautiful countryside - lovely!
The dams sound very interesting to visit for a great walk and you had gorgeous looking weather.
Sad to hear about Blackpool. I've never been, one of my friends is planning on going for a long weekend in Oct, maybe I should advise her to go somewhere else!

Limiting drinks - and so they should!! Be thrown out that is!

Lovely pictures of a part of our country I never seem to get far enough to visit.

What a heavenly scenery (the dams of course!)Have a good start to your week :)

I love it around that area Diane, arent we lucky to have it practically on our doorstep? Glad you enjoyed yourselves and thanks for sharing lovely photos....but Blackpool...oh dear, I know what you mean - we ventured there a few years ago on the way to somewhere else and were sorry we did. Did it stink of burgers? There was rubbish everywhere when we stopped by, and I remember we too laughed at the signs outside the boarding houses advertising things like ENSUITE!! and C O L O U R TV's IN EVERY ROOM!!! Like it was some amazing new trend!!

That thirteen mile walk looked heavenly......... absolutely beautiful. Have never been to Blackpool, but it doesnt look like I have missed much!

Diane! I love to work, I'm not lazy! ..have you ever seen an elephant in a glass shop...it was me! That's why I use Swiffer duster...so I don't need to move the stuff from the shelves!

Hello. I've been to Sheffield soooo many times & have never heard of the Derwent Valley. It looks so beautiful- I must visit there next time I'm up.

Thank you for visiting my blog :)

Yours is lovely too- I will be back!

Stunning photos of the countryside and dams. Whenever I see any of those WW2 planes I get goosebumps thinking about what they had to do and the crews inside and the dreadful things they faced.
I have never had any inclination to visit Blackpool and after your experience this weekend I don't think it's changed my mind!
Lisa x

the photos of the derwent valley look gorgeous. I went to Blackpool about 8 years ago and felt then that it was very slowly dying and it would seem that this is still the case. its very sad as it could have so much to offer.

What a fantastic walk around the dams. I've been to Ladybower and walked there but not to Derwent or Howden - I have a little book about Birchinlee the Tin Town - it's a fascinating read. I also wonder about the farms and villages that were abandoned when the reservoirs were built and are now under water. I remember going to Blackpool as a child and being taken to see a circus in the tower - the performance area in the arena filled with water at the end. We were then taken to see the animals - I'm afraid I didn't like it or the clowns either. I'd heard recently from some neighbours how dire Blackpool was now. Hope Salford has more to offer than Preston with Media courses for your Dancing Queen:)

Once again gorgeous photos of the countryside. And you're so lucky to see the Red Arrows, I love them!!

Never been to Blackpool, when I was at uni in Manchester we always said we'd hop on a train and go but we never did - looks like we didn't miss much!!

hope you like Salford better - it is a much more established Uni and Manchester is a great city - thanks for the lovely photos - am really impressed with 13 miles!!!!!!!!!!!

Diane, it would be nice to meet up when you come next year. I am doing my first ever "blind date" with a blogging friend this week - I know we will get on like a house on fire but still feel nervous, silly ain't it!

Thanks for all your lovely comments you always leave for me, I love hearing from you

ps. So many happy memories of Blackpool - I love everything about it for all of it's unrefineness!!!!

Wow what a wonderful place, shame about Blackpool we had a similiar experience ourselves there a decadeor so ago.

Lovely pics! I haven't been to Blackpool for an age either ... I agree it's like Hell!!

Two very different days in hugely contrasting places. I suppose we should all be grateful that we can get out and about in beautiful countryside whilst wondering why others take the Blackpool option.

i soooo wanted to visit blackpool when we went to lancaster but there wasnt enough time. probably best given your experience. we always went up there for hols, southport and cleveleys too and i have fab memories of the ballroom in the tower and mike and bernie winters at the show!!ahh

Hello Diane,
Just fell across your blog and so glad I have it's a lovely blog.

We're off on holiday in a couple of weeks to the Edale valley and can't wait to visit Derwent Valley as when we were there last year we just drove passed but we have more time this year.