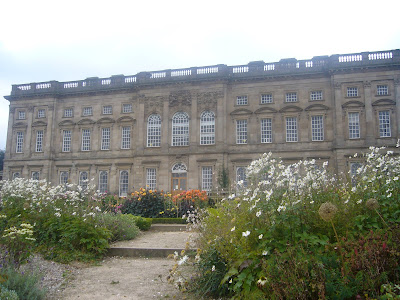 Blogging has opened my eyes to so many totally amazing places in the UK, but none more than the gorgeous places that are here on my doorstep in South Yorkshire and places that I was in danger of taking for granted. I realise now, that South Yorkshire is packed to the brim with beautiful large old country houses. None of these are owned by the National Trust or English Heritage. Some are still in private hands, whilst the others are used for hotels or colleges. Wentworth Castle (not to be confused with Wentworth Woodhouse which is actually in the village of Wentworth-although they were related.) is situated in Stainborough and clearly visible when you head south on the M1 just past the Barnsley turn off. It was built in the 1700's and was lived in up until 1948 when there was no heir to the house and so it was sold off. It is now a college, but the gardens and parkland are now run by a newly formed trust so that they can hopefully be restored to their former glory. It was the subject of a BBC programme called "Restoration" and they won a lot of money to start the project off. Despite already costed millions, the project is still in its infancy as the infrastructure of the place had to be strenghthened and rebuilt in places. Hubby and I took advantage of the free open weekend to catch up on what has been happening since we first went to take a look.
As the house is a working college, you cannot usually get to look inside, but they do have a few open days in the summer. I'll have to try and catch one as I have never been in.
The gardens are not at their best at this time of year. They are truly spectacular in May/June time when the Rhodendrons and Azaleas are in flower. This Victorian garden still looked very pretty. 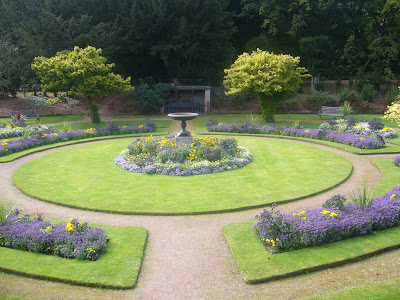 The views over the parkland and surrounding area's are very lush and green. The village where I was born is in the middle of this photograph, however the scenery did not look like this when I was growing up as the area was mined heavily for coal and until recently massive coal tips dotted the landscape. There are none of them left now. 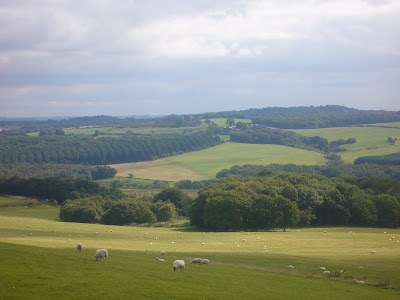 At the top of the hill behind the house, one of the Earls of Strafford built a mock castle with its own half ruined keep. In summer, they hold Opera and plays on the lawn now. 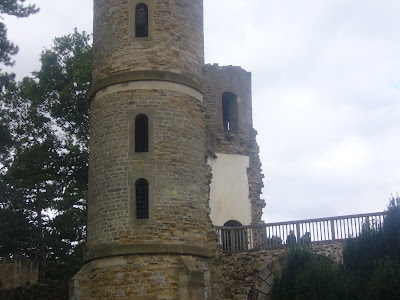 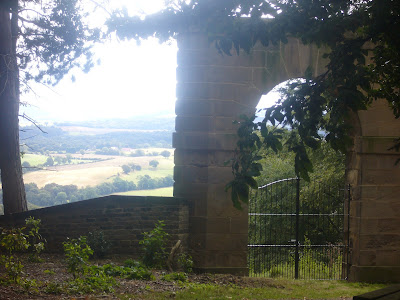 The trust was unsuccesful in securing funding to restore the huge conservetory behind the house. They are still trying to raise money for this project. If they are not quick, I fear it will fall down. It looks very dilapidated. 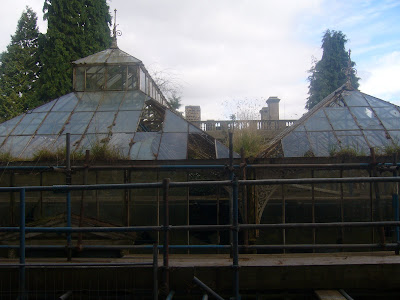 There is a walk around the parkland itself with a number of follies, lakes and bridges to see and it has one of the best kids playgrounds that I have ever seen. It also has a fabulous tea room. I suppose they have to rely on locals coming back time and time again as Barnsley isn't currently a tourist destination.
Posted by Diane at Tuesday, September 15, 2009

I completely agree about blogging opening one's eyes to the amazing places we have here in the UK.
It does it in two ways - through other peoples' blogs I virtually visit many places I have never been and see some that perhaps I would make an effort to get to at some furure date, and in one's own blog - since I have started blogging I find I make an extra effort to find and visit interesting places on my own doorstep, it's been quite an eye-opener and worth it for that alone.

I particularly like your Victorian garden photo by the way!

Yes it's great that we can all get to go to these places through the medium of blogging.

The heritage weekends are a great idea. It's always sad when these old buildings fall into disrepair, so even though this one is being used to a large extent it would be great if that wonderful conseratory could be conserved too.
Lisa x

What a lovely place! Do you really have nice weather during these days?? Lucky you!

I'm so impressed at the number of day trips you manage to take! Is there a stone left unturned in South Yorkshire?!

Love the picture of the Victorian garden, the colours are lovely.

Thanks for your kind comments about Wentworth Castle Gardens. We will hear on Friday the 25th Sept whether we have been successful obtaining a phase 1 pass from the Heritage Lottery Fund to restore our Conservatory. It will cost approx. £3M to return this great building back to its former glory. Fingers crossed!

You will be surprised to learn that Barnsley is indeed a tourist destination and we get people travelling from all over the UK to visit our estate. Last year over 30,000 people visited us and we also get many visitors from abroad. As you know we are just a stones throw from the peak district and have some lovely countryside around the borough. I'm sure as time goes by, more and more people will get to know this little secret!

Hi Paul, How did you find my blog? Would love to have a chat with you - drop me an email if you get chance diane008@btinternet.com.

Michela - yes the weather here has been beautiful for the last 2 weeks - hubby said this morning that its the best spell of weather he can remember from the last 3 years!!! Thats why we are making the most of it and the housework is just getting left - plenty of time for that later!!

I think the reason why I love your blog so much, is that it reminds me of the rich & beautiful heritage that I am surrounded by, here, just a little south of you, on the edge of the Peak District. Now that I am older, and unable to afford to live in the peak villages where I spent my teens, do I now appreciate how lucky I was, but I also realise how lucky I am to be only 10 minutes away, and that daily I pootle around the countryside of NE Derbyshire. Your blogs remind me of this, and inspire me to get out & explore what is on my doorstep.

Sending you a hug & thanks

I'm always finding out new things and new places to visit from other bloggers - you especially Diane, have shown me so many lovely places - I know we have lots of favourites in common especially in Derbyshire but I love your posts about your immediate area in South Yorkshire - I think blogging about our local places opens up our eyes to what is around us and what we can take for granted or think that perhaps other people won't find them interesting. Hope you are enjoying the lovely weather:)

The landscapes and buildings in your part of the world truly are breathtaking!