When hubby finally arose (he had been on nights), we decided to have a quick walk around Nostell Priory (NT) which is just a short ride from us. It totally throws me when we have a late start to the day - although I hasten to add that I had been up early to drop the dancing queen off at work.

Nostell Priory is near Wakefield and houses very fine Chippendale furniture. It has a great park and lakes too. We had a quick whiz around the house, and then headed outside for a walk around the lakes. 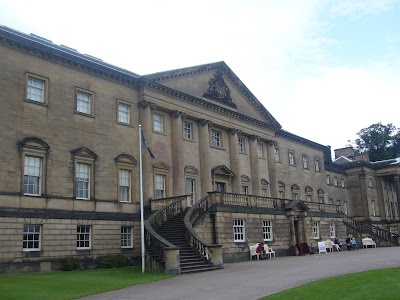 The picture below was taken from the back of the house. On our tour around, one of the stewards told us that it was notorious amongst the gentry for being a very cold house. The kitchens are on the right of the picture and seperated from the main house by a long stone corridor. Hubby said they must have never had a hot meal!! 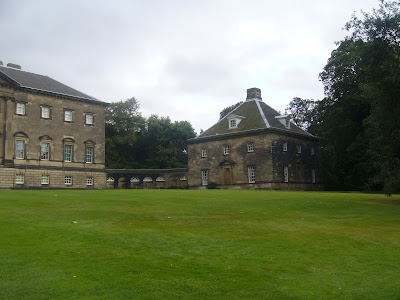 The sun shone whilst on our walk making lovely patterns on the lake - very similar to the lakes at Wentworth. I wonder if they were designed by the same person? 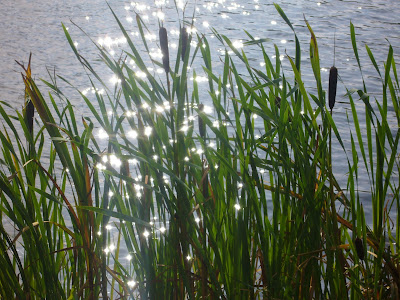 We had never noticed this bridge on previous visits, so we went closer to investigate. 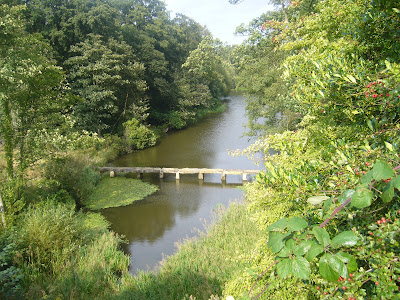 We discovered a newly developed walk around the bottom lake. It turns out that until recently, this bridge had been on the bottom of the lake after collapsing in many years ago. They must have found some strapping blokes to fish it out and re construct it!! 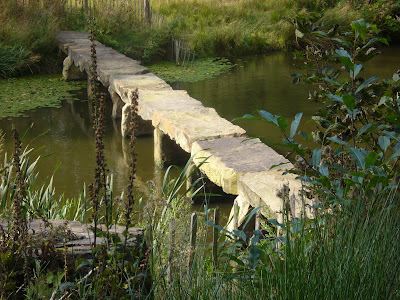 Finally my summer knitting project is complete. I can't do complicated knitting any more, I seem to have lost concentration - so I like to knit something I can just pick up and put down ad hoc. Here is another cushion for the teenagers play room. 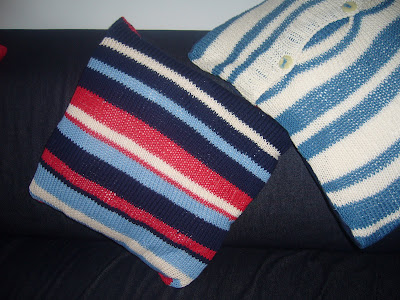 and the back. I do love a Nautical stripe!! 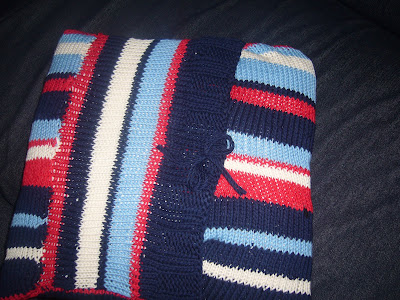 Christmas Baby! I asked the MagPie and she just smiled ;D

Lovely stripey knitting, good colours too. Well done on finnishing it! I have many indiscriminate pieces of unfinnished knitting loitering on shelves and in little nooks making me feel guilty!

Lucky you that you can knit,the cushions look great! Have a fabby Sunday!

Those cushions look lovely. My Mum spent an ill-fated summer trying to teach me how to knit once. It didn't end well and I've never tried it since!

that kitchen house is intreguing because of the black staining on the outside! obviously it was before the days of extractor fans!! x

The black staining on the outside of the house was caused by the surrounding area being a mining area and everyone having coal fires. The rest of the house has had a clean up. xx

Good idea with the knitting. I could do with a project like that! I can't believe I knitted all my own jumpers and cardies in the 70's and 80's!!!

i love your little trips out.....i so want to come up to your part of yorkshire and explore.you should definitely be a consultant for the tourist board!

I think Elsy is spot on, you should work for the tourist board! So many lovely places you have to explore.
Lisa x

Thanks for the tour, despite their current financial problems the National Trust do a good job preserving these places for us all to enjoy. Love the nautical cushion, hope it becomes a national treasure too.

Loving the back of that cushion. Have started a replacement blog. Would love you to keep visiting whenever time allows. x

I like simple knitting, too - so you can talk and be sociable - it's often more relaxing, as well!