...or as they would say around here - "rarnd tarn" (its very difficult to spell broad Yorkshire!).

I found myself on Saturday with no playmates, and so I thought I would take myself off to Barnsley.

I hadn't been to Barnsley town centre for ages - the last time I went I thought it ought to be twinned with Beirut! So I had been in no hurry to go back. Barnsley has been a victim of economic times since Maggie Thatcher and Arthur Scargill went to war. The town was a mining town and when all the mines closed, they were replaces by - nothing. It also used to have several large clothing factories (no one in Barnsley had need to shop in M&S, you could get everything from the factory shops!), sadly, every one of them now manufacturing in the far east and replaced by - nothing. Barnsley is one of the top 10 towns in Britain where employment in the public sector is greater than the private sector, so once again it is bracing itself for even more unemployment and decimation of its communities.

After my last visit a few years ago, I wasn't expecting much, but I was very pleasantly surprised.

The town hall is a bit different from other northern town halls which all seem to be Victorian Extravaganza's. Although it has been cleaned up, it still bears some of the grime from when it was surrounded by the coal mining industry - I think it adds to its charm. 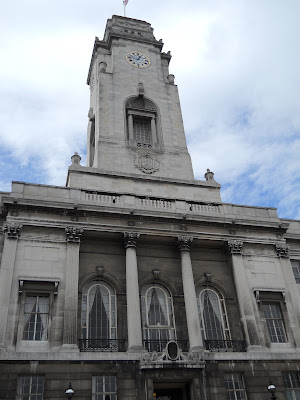 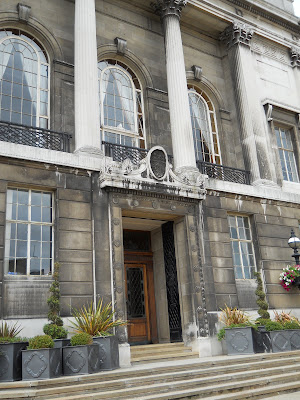 Planting around the town hall is very "Parks and Gardens", again adding to the charm. 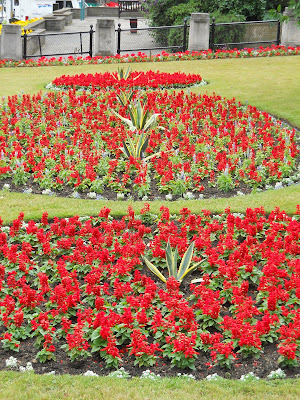 Now you don't expect to see this in Barnsley do you, fashion capitol of the north? I don't think so, but Pollyanna (a shop where I have never been able to afford to shop in) has been at the top of its game since the early 1980's thanks to its powerhouse of a person, owner Rita Britton. It also has a great little cafe too (with a french chef). In fact the town now has lots of very lovely little cafes. 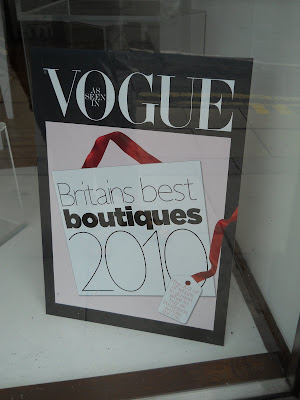 The town boasts a couple of very pretty Edwardian Arcades. This one has had a recent makeover and now features some lovely little shops including a stunning little vintage shop selling brilliant vintage children clothing and handmade gifts. 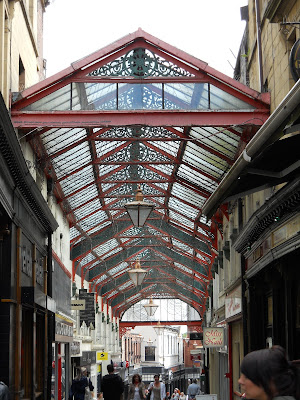 The town centre was hit hard (like every town and city centre in South Yorkshire) when the huge shopping mall "Meadowhall" was built near Sheffield, however it hit back by building a small indoor mall in the town centre itself (genius) unlike Rotherham who built its mall out of town (bad idea).
My mission was to check out the once famous Barnsley Market.
Now here's an idea for all you fans of bunting - try using cheap, England ladies thongy pants! Very effective! Only in Barnsley!!!! 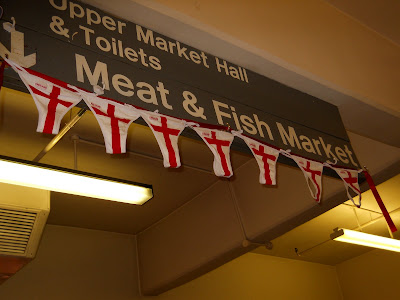 I worked in Barnsley in the 1980's and the market was fabulous then. Thanks to our manufacturing overseas policy in the UK, the market no longer boasts the fantastic fabrics, shoes and clothing it used to sell, but I was pleasantly surprised to find a few really good stalls. Some of the stalls have been here since time begun. 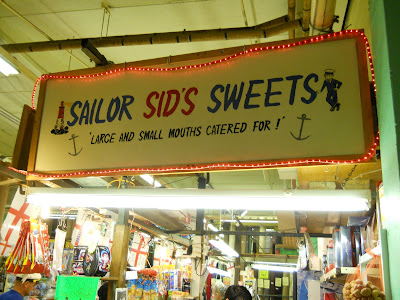 And its still great for haberdashery. I bought 2 HUGE reels of ribbons for just £1. 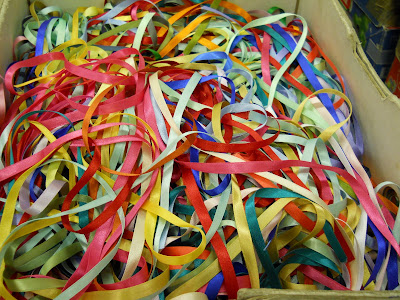 The food market still thrives - great quality, priced to suit the tight Yorkshire folk. I couldn't help compare the great look of the fruit, veg meat and fish with the sad offerings we get in supermarkets. 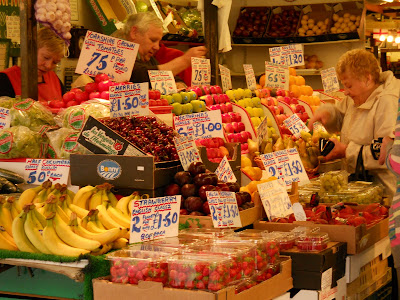 All of the bakery stalls are local bakers (the town has a fair few bakeries - one of them sells baguettes to France!) 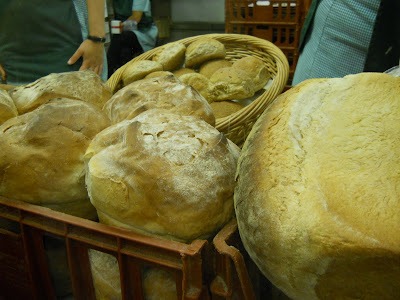 I hate supermarket fish - you can't beat a proper fishmongers. 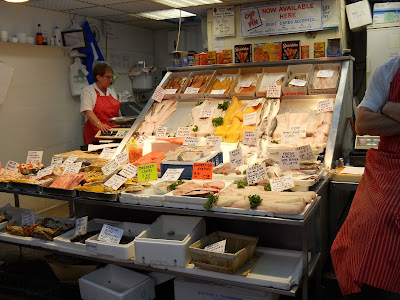 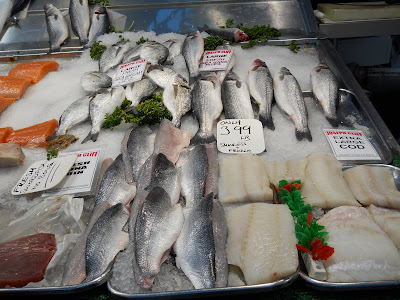 WARNING - vegetarians and those of a nervous disposition may need to look away now!
I have only seen stalls in Barnsley and in France selling delicacies like these - Tripe, pig bag(!!) cow heels, pigs trotters, chitterlings. I admire the french for using all of the animal in their cooking, and surprise surprise, they are still doing this here in Barnsley. Ive only had tripe once, and it didn't taste of anything, I'll have to find a french recipe! 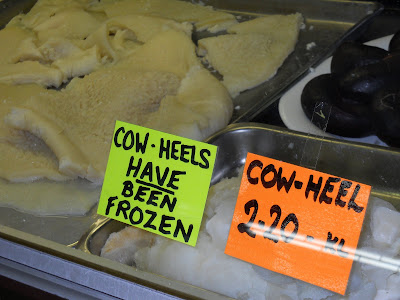 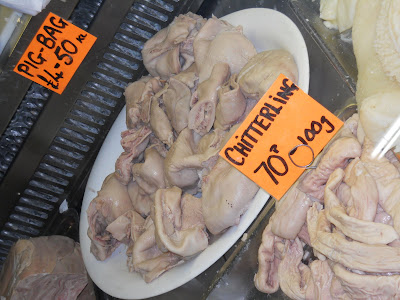 Before I left, I had to check to see if the roundabout was still there. Its been here ever since I was a little girl. Like me, it has faded charm and is most definitely an antique, but still in great working order! 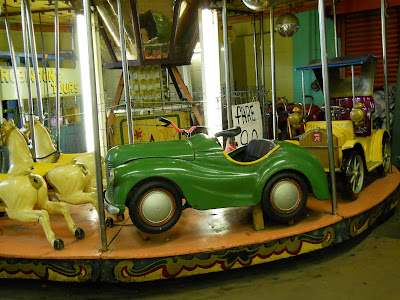 It made me think - I use supermarkets because they are convenient. I work on a business park in the middle of nowhere, and can't get to a market in the week. I also (like the queen) never have any cash on me and use my "switch " card in the supermarket. However, I may have to change my habits. Market shopping is more fun, cheaper, more seasonal and the produce is far superior.
Barnsley - I'll be back!!! Or as they say in Barnsley, "I'll si thi"

And can I just say, for the third time in as many posts, I got some funny looks taking my photo's - especially on the offal stall!!!!
Posted by Diane at Sunday, July 18, 2010

Oh the memories came flooding back...my mum made all our clothes (and the rest of the street) and barnsley market was a fave for fabric! the sweet stalls, the roundabout, I remember them well! Thanks for a sharing a super post from a proud yorkshire lass!
Deb x

Fabulous thanks for showing us

Made me proud to be Yorkshire too. You really can't beat a proper town with a proper market, beats an out of town supermarket any day. Great photos, great post for Barnsley.

As much as I love progress...well, sometimes "things just ain't what they used to be!" I had a similar experience returning to a coal mining region here in the US. I expected to see a depressed, run down area but was so pleasantly surprised at their ingenuity. Lemons to lemonade! I love it.

I always find the fruit & veg in supermarkets such a disappointment. It always looks, and smells, a million times better on a market stall or in a proper greengrocers.

I loved the bunting.... it made me laugh out loud.

Of course, the other thing about markets is that you get a bit of banter from each stall holder......... Wish I had a market like that nearby....

Love the Sailor Sid's Sweets sign and the bread looks gorgeous - we have a local covered market that opens twice a week at the back of the town hall. There is also one in the city centre on the lower ground floor of the Potteries Shopping Centre and it attracts quite a lot of shoppers down to it:)

Oh Diane you could work for local tourism you do a grand job and you make it all look and sound great. Have a great week hugs Pat

I just love your little peeps into Yorkshire life Diane, it's brilliant and better than the travel pages in the paper! That bunting is just tops. Love love love it.

Thanks for the tour. I've never been to Barnsley (it's south of here) although my cousin has a pub there.

That was a lovely tour. It is great to see all those places and all your enthusiasm for them.

Fingers crossed for Barnsley - I'm sure it'll weather the storm of the next few years but i hope it isn't too harsh!

i love that market diane....you are so lucky to have all that on your doorstep. how wonderful to be able to shop like that again, i bet we would be more inventive with that kind of produce.

My DH was in Barnsley on Saturday too but he was at the Women's cricket international! I've never been but I must admit it does look quite interesting especially the fresh food stalls in the market. I've never been able to face tripe but my mum loved it! An old friend of mine is a lover of pig's trotters! I'm OK with liver and kidneys but I confess that most offal isn't my idea of good eating. It's more the thought of it than anything and maybe if I was hungry enough I might be less picky! Love the roundabout, that is so nice.

I bet the freshly baked bread smelt delicious, not sure it would have been quite so fragrant by the tripe!
Lisa x

Brings back a lot of memories , About 20 years ago I used to visit an ex of mine who still lives there but then he broke my heart -- that is one accent you can never forget.

It's years since I've been to Barnsley market. I used to go on a Saturday for the all the fab fabric stalls. It's a shame they are no longer there.
Great post :)