I don't spend much on skincare. I'm fortunate enough to have fairly decent skin and a pot of Nivea or Astral (the very cheap stuff) usually sees me right and stops me wrinkling up like a prune. However, a while back, I applied for a "Freebie" on the Moneysavingexpert website, and was chosen to take part in a blind testing of face creams. I was sent a very large pot of some very strange smelling face cream that I had to test and give my opinion on. To my surprise, the cream did seem to make a big difference to the texture and brightness of my skin, and several people commented too. I was most disappointed when it was revealed that I had been sent one of the more expensive creams and it was way out of my price range.

However, on a recent trip to TK Maxx in Sheffield,(not wanting or needing anything, but having to have a look around any way!) I discovered a pot of the cream that I had tested - at a way reduced price! 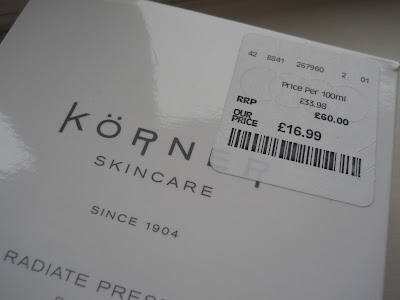 And whilst £16.99 is much more than I would like to pay, I decided to treat myself as it should have been £60.00. This pot incidentally is about a third of the size of the one that they sent me to test, so that was a fantastic freebie!

Interesting that the expensive stuff does seem to make a difference.

That was a real bargain and with the expensive creams a little usually goes a long way.

Whose a lucky girl then!! Sometimes TK Max has brilliant bargains, I once bought a lovely pale blue italian leather weekend bag it was so beautiful £40 instead of £140 a real bargain.
have a good week Diane,
Jillxx

I agree great bargain [and even better freebie ]everyone deserves to treat themselves urm ! now and again [all the time in my case ] have a great week Diane .

Wow, who pays £60?! What a bargain. I love TK Maxx. I too never use creams and never wear make up. Maybe I should?!

What a bargain especially since it works. Were you able to keep the one they sent for testing?

Blimey, £60 for a face cream. I don't suppose £16.99 is too bad when you already know it works. You certainly got a good freebie there.

I've never even heard of the Korner Skincare - but, is that any wonder, seeing as it's well out of my price range too.
It's always nice to treat yourself Diane and you managed to get such a bargain :0)
xxxx

As you know I worked in Boots so I have tried them all & what I'ld say is stick to the one that you have always used your skin is use to it, & it's better on your purse too.

I use good old Ponds or Nivea but friends do notice when I use ones that I may have had as a gift . Enjoy your TK Max bargain !

I have nere heard of Korner Skin care. I agree £60 is outrageous £16 is much closer to a sensible price. I used to use and sell DeLance make up in S.Africa which was perfect for my skin and very reasonable, it is unavailable here unless I get it posted which then just bumps up the costs. I have switched to Garnier but will use Delance if I can get it and someone is coming over to the UK. Diane

This should be a lesson to us all in the necessity to browse discount shops: a great bargain! So nice to find something that makes your skin feel good too.

Lucky you - what a bargain. Worth paying for if it makes a difference.

I suffer with rosacea in the worst place (my nose) and it makes my life a misery so I really need good moisturiser and will pay a lot for it if it helps me! Dave has just bought me some Steam Cream to try after another blogger recommended it to me!

Wow that's amazing! I had a look on money saving expert but couldn't work out how to sign up for freebies - how do you do it?

What a bargain! I was in T K Maxx this morning but just around the home section - there were some lovely things. I've never heard of that brand before! I always use Body Shop vitamine E creams and cleansers etc. You certainly had an excellent freebie there:)

I'll definitely have to check this band out,

I have always wanted a pot of Creme de la Mer but could never justify paying over £100.00 for a pot. If it were a freebie though...... I do like to use nice face creams. If I use cheaper brands it makes me feel cheap which is silly I know, but it is how I feel. I would rather look like a prune!!! x

Can't seem to use anything but Clinique or my skin goes silly, trouble is it costs a lot. NOT however as much as some mentioned above.

I love wafting past the Chanel counter in our local town, just love the packaging - but does it work!

I hope you stocked up, what a complete bargain!