Whilst out browsing on Sharrow Vale Road today - I discovered 2 copies of my teenage bible - Jackie - just £1 each BARGAIN!!! and a great investment if you bought it at 7p and sold it for 100p!! (more maths Michela!). I let out such a cry that hubby thought I was having a heart attack! I have known my friend Sue since we were 5 years old. She constantly reminds me of the teenage girls that we were - so much so that I still call her Pixie, and she calls me Chicken legs - our comprehensive school nicknames. We would read the print off Jackie every week. Both of these are from February 1977 - so a bit later than we would actually have been buying it, but I don't think it ever changed much. Come with me and re live your youth. 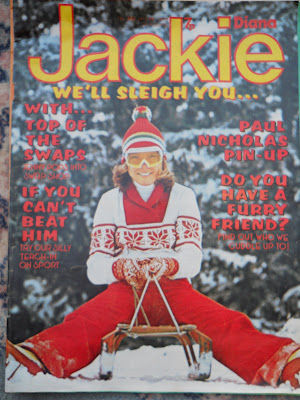 I liked the story's, obviously written by someones Mum. No boy in my class would have recommended talking any problem over with your parents - in real life he would have been saying " well just don't tell 'em!" (I love the "they'll probably be very reasonable" - of course they won't, they were parents - they would just say "no"!!!) 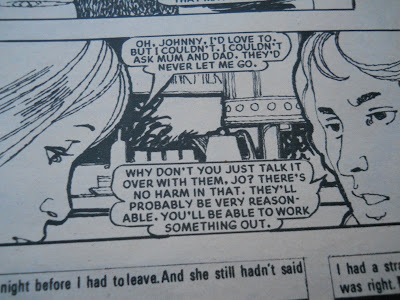 And the posters. I flirted only very briefly with the Bay City Rollers. I was only allowed 1 poster on my bedroom wall - I chose David Cassidy. 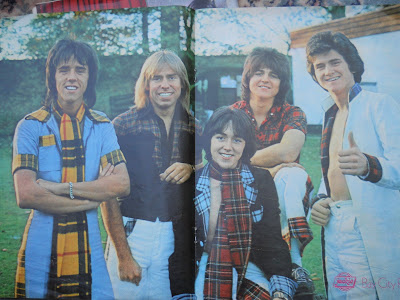 And this is for Janet and John - they know why. 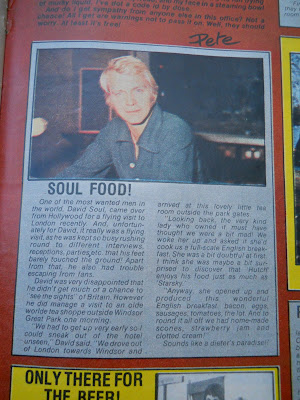 Were camera's not invented in 1977??!! The fashion pages are drawn!!! But I still wanted everything. 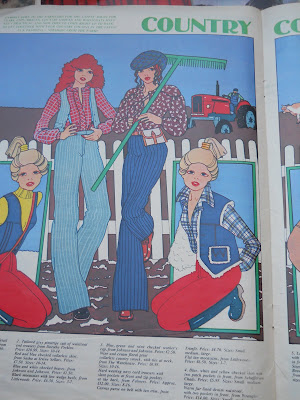 There are very few adverts in the mags, but I really remember this one. I wanted to join the Queen Alexander Nursing Corps (I probably got the idea from this advert!). I sent off for the booklet and it really fired me up. But my mum - the dream squasher- told me to forget that daft idea. (You have to understand that my mums idea of the perfect job was that you had to be able to get to it on a "Yorkshire Traction " bus - just the one, no changing buses!) 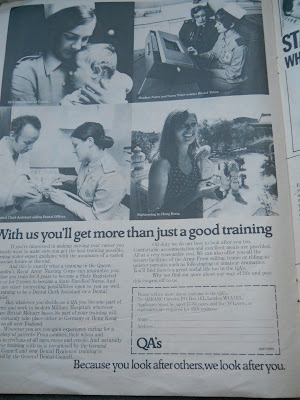 All my questions about periods, different size boobs, split ends and clicking knees (and I did once go to the doctors with clicking knees!) were answered by "Dear Doctor". 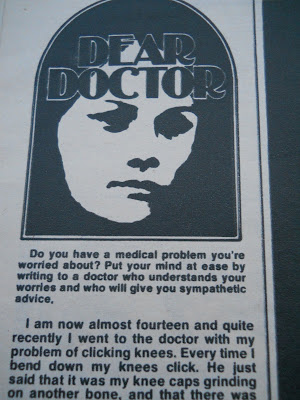 And problems about boyfriends (or lack of in my case) etc were delicately answered by Cathy and Claire. 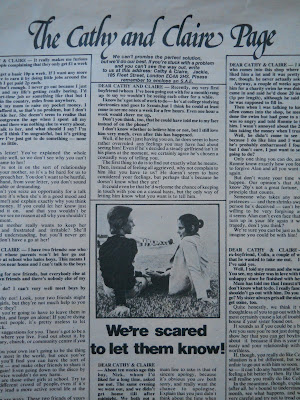 But my favourite bit (as Pixie reminds me every time I see her) was the "Weekspot". I religiously followed their suggestions every day, every week. 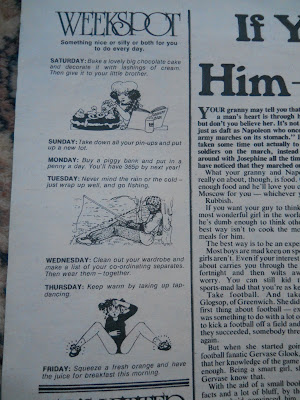 These were a brilliant find and I shall be posting one of them off to Pixie (when I have read it cover to cover of course.) I won't even have to tell her who its from!
Posted by Diane at Saturday, February 26, 2011

Brilliant ! the young David Soul still makes my heart thump faster !and I still remember practicing kissing on the back of my hand[as recommended in Jackie]for that all important first snog !

Thanks for the memories! My Mum bought me Jackie, Mates and My Guy every week!!! They seem so tame compared with what is on the market today! I used to love the Bay City Rollers and once went to see them when I was in the audience of the T.V show Supersonic shown on Saturday mornings!!! x

Swoon, I loved David Soul. I remember buying Jackie too, 1977 would have been around the time I was buying it. Ah, the memories.

I used to read Jackie too. Have you see the book version isbn no
1-86200-376-9. I got mine from Eccy Road charity shop. Its a great read. I was a Donny Osmond/Bay City Rollers fan and was only reminiscing yesterday about my visit to the City Hall to see them when I was 9 I didn't go alone though I was with my very responsible 11 year old sister and her pals. Can you believe that on our own - we were dropped off and colected but we wouldn't do that now would we. We had home made skinner trousers on and tight t-shirts, it was fab. Woody was my man and Eric my sisters lol. I once pretended to tear her poster and she went MAD. Happy times.

Forgot to say listened to Shangalang only yesterday at Hope and Elvis - her new courses are on the website. Oh and what is the girl doing in the Friday picture!

A really interesting post to someone like me who lived in Zimbabwe and never saw any of these things. I guess we had something different over there but I can not remember what!! the other Diane xx

I think I was a bit young for 'Jackie' although I do remember it in the shops.
I was a 'Tammy' girl myself and when I could get it the slighty spooky 'Misty'...before I moved onto 'Smash Hits' and 'Just Seventeen'.
I remember getting the very first issue of 'Just Seventeen' free with 'Smash Hits' in about 1983/4
Happy days!!!
Em xxxxxxxx

I was buying mine a bit before 1977 too but I devoured Jackie every week. Janet, I remember practising kissing the back of my hand too! Strangely it didn't bear much resemblance to the real thing, I later found out...

Hi Diane , great find ,I aws more of a "blue jeans" fan but I remember Jackie too.
That weekspot picture for tap dancing made me laugh ....for a moment I thought it said lap dancing :0)

Oh how fascinating! I have never heard of it but it looks so tame compared to the stuff the publish now, i'd much rather have read this kind of thing! x

I have had the best laugh this morning reading this post and the comments. Especially kissing the back of the hand bit. Hysterical.
Thanks for the laughs,
Anne xx

Fab, I loved Jackie, I have two big Sisters and used to sneak a peak at their copies and then bought my own when I was older. I learnt so much from the Cathy and Claire problem page :)
Twiggy x

You have sure had fun going back in time. That find must have been like time travelling. I can't say that I remember those mags, probably not available here. I am redoing my old photo albums, getting the photos out of those horrible plastic sticky pages. This activity has taken me back to my teenage days too.

that should be ALBUM FORM!!!

how I loved jackie - our teenage bible... I used to cut out the weekspots and still have the book that theya re in. Loved your post as it brought back sooo many happy memories of when I was growing up.

What a fab find to take you back for a wander down memory lane. Don't recognise that bloke in the front of the Bay City Rollers photo, di he leave and get replaced I wonder?
Following those weekly suggestions is probably why you cram as much into life as you do,maybe it sowed the seed of wanting to try doing as much stuff as you can. Mind you you were probably like that anyway if you wanted to do the QA nurse thing, always busy!
Lisa x

Ahhh! those were the (innocent) days. I dread to think what info is inside mags aimed at the same age group today.

Starsky was always my favourite, even though he had questionable taste in cardigans.

Well that was a trip down memory lane! What a great post and there I was thinking I was the only person in the world with 'chicken legs' as a nick name! x

Those were the days! I think I may have had Jackie for a short while but I remember more buying 'Petticoat' and 'Fabulous' magazines. My Mum disapproved of 'Petticoat'! Ah, David Soul - I still have an LP of his somewhere in the roof space:)

Oh my gosh, I so remember Jackie magazine, and the picture of David Soul...well he was all over my bedroom wall! Wonderful :o)

... another great trip down memory lane and you've inspired me to do a similar post - check it out Diane if get a minute!

I was more of a Marc Bolan girl. Great post - I rememebr it all - but nothing about the Week spots!

Some of the sugestions for Week Spot are a hoot...'if you save a penny a day you'll have 365p after a year!' Aww, so innocent. Good times.