Ive hardly been in this week. I have had a full weeks entertainment - and it only cost me £15!
First up was a trip to the cinema to see the remake of "True Grit" . I managed to get 4 free tickets for us (from www.seefilmfirst.co.uk via Moneysavingexpert sight). Usually the free tickets are for chickflick/romcom type movies, so the boys were highly delighted when this weeks tickets were for a Western. Hubby didn't think it would be any where near as good as the original, but he was wrong. It was really good. The acting is superb, the cinematography is great and Matt Damon looks so tasty! 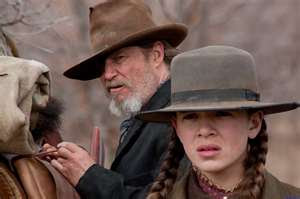 Next up was a trip to my very local theatre - The Academy Theatre - at Birdwell. This is a great little theatre that they made out of a frozen food warehouse. It has taken off big style. The level of acting and singing that the company produce is equally as good as any I have seen at larger theatres. I went with my WI group to see "La Cage aux Folles" which was a superb play about a transvestite night club in Cannes. All the male actors were from the Barnsley area and had to be waxed to within an inch of their lives!!! They were superb and I really struggled to tell the boys from the girls! Cost £10

And last but by no means least was my sons schools production of "Grease" (he wasnt in it, but I knew a lot of the ones that were). The school has produced some great musicals over the years and this was up there with them. The acting and singing was spot on, and they had their own orchestra made up of very talented pupils and members of staff. School concerts still bring a tear to my eye! I am such a Jess. Cost £5

All in all a very lovely weeks entertainment.

You on mse too?

Wow, you've been busy - and it all sounds great - and a bargain! Well done! Enjoy the rest of the weekend!

Sounds like a great week ! glad you have recommended the True Grit film -quite fancied going to see that myself but was worried I might be disappointed and compare it to the John Wayne version -have a great weekend Diane LOL X

They all sound like fab evenings out Diane. I really miss going to the cinema and theatre. Fingers crossed Violet will be able to sit through a Pantomime at the end of this year :0)
The school play sounds amazing - can't wait for that kind of thing to start.
xxxx

They sound like my kind of outings. I love watching school plays, you can tell that they put so much effort in to producing them.

I'm a bit wary of the new True Grit but I'll go see it eventually! Great that you had such an entertaining week.

You have been busy and very lucky with the cost of your evenings out too! Glad you enjoyed all the entertainment - have a great weekend.xx

Thanks for the review of True Grit Diane .... I too was wondering if it would be as good as the original. I didn't think anyone could fill John Wayne's boots but after seeing Jeff Bridges in the trailer seems it will be worth going to see. Have a great Sunday!

I must go see it!

Lucky you getting free tickets.

Wow what a great week you have had and all for £15.oo well done.

Have a good day hugs Pat.

sounds fabulous... I've heard very very good reviews for True Grit... maybe should have chosen that instead of Black Swan...!

Coen Brothers mvies do tend to be very good don't they. Glad it was enjoyed by all.
Have you seen the Birdcage movie? Love it, bet it was fab on stage.
And who doesn't love Grease? Tell me about it.... stud?!
Lisa x