Our "home" whilst in France was on the campsite at Maisons Lafitte - a very affluent little suburb of Paris and only 15-20 minutes by RER train (which seemed to be every 5 minutes) into the centre of Paris.
The campsite itself sits on an Island in the middle of the river Seine, and it was fascinating to watch the huge barges passing. 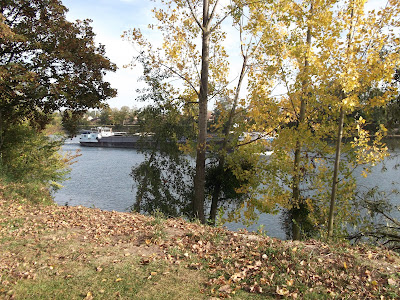 It has its own Chateau, 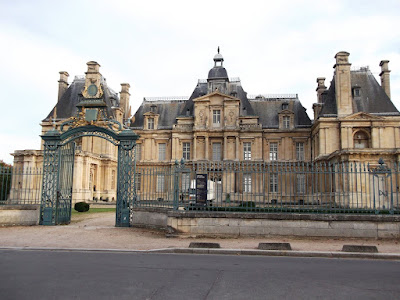 which sits in the middle of the town, 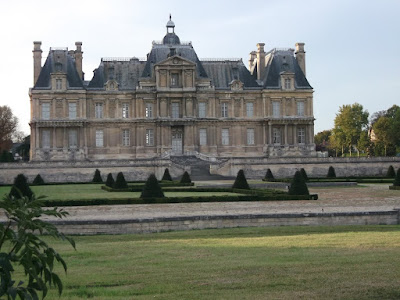 It has great little parks for strolling around and sitting people watching, 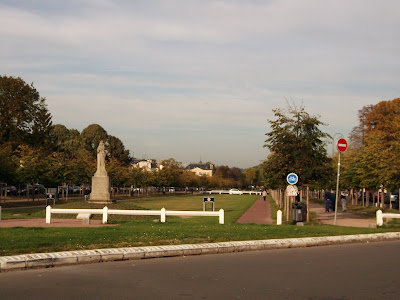 And is famous for being a centre for horse racing in France. 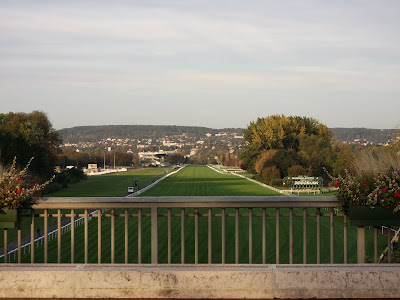 In Masons Lafitte, every Frenchmans maison appears to be a mini chateau. We had a good look in the estate agents windows and realised that here you could buy one of these for around 4 million euros, whereas in central Paris, you only got an apartment for that amount! 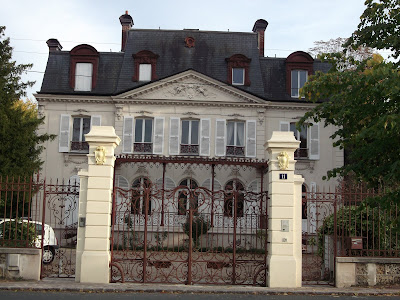 The main drag had some great shops and restaurants on it. We bought our baguettes filled with ham, cheese and salad every day before we got on the train in the morning - and found somewhere spectacular in central Paris to sit and eat these. We called back at a very reasonable priced restaurant before returning to our caravan each night. We sat out on the pavement and the atmosphere was brilliant. We watched the French men hop straight off the train and call into the Patisserie before heading off home. We watched everyone stop and speak to a French lady (who was obviously famous in France, but we didn't recognise her) and have their photograph taken with her. We watched how everyone chatted non stop and socialised over meals, coffee, wine. I love that part of French culture. 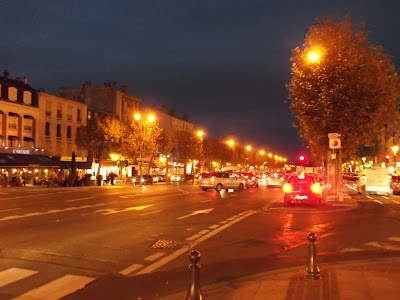 It feels very safe in Maisons Lafitte, and its such a handy and economical place to stay for a visit to Paris. Its the second time we have stayed here, and we would not hesitate to return. 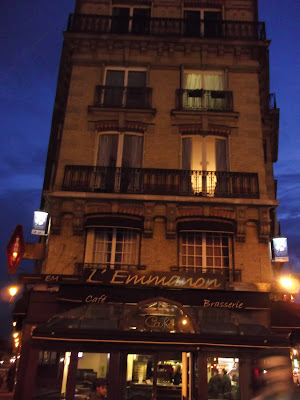 It looks wonderful!
I can't get my head round the fact that there's a whole town on an island in the middle of a river!

looks like paris might be on our agenda - al la Diane style of course - we couldn't afford it otherwise so thanks for your tips.

My wife Becky and I have stayed where you mentioned, about five years ago. We loved it for being so close to Central Paris, and for its own charms as well. Really must think about going back sometime! There was an excellent Boulangerie on the road back to the site, if I remember rightly.

Really enjoyed your Paris posts, it's been a walk down memory lane for me!

It looks a wonderful place in it's own right, but very handy for Paris too. The chateau looks very grand, and so does the mini one.

What a lovely place to stay, and a hole town on an island how great.

What a wonderful holiday you had. I have never been to the Continent. But that particular spot looks very enticing.

Sounds lovely - we've just been the once to montmartre and can't wait to go back - like you say the culture there is so warm and inviting - magnifique !

It all looks so elegant. Thanks for sharing your top tip for a place to stay. I wonder who that woman was?!
Lisa x

Looks an interesting place and what a good idea to stay outside the city centre away from the top city prices. I love that building in the last photo and wonder about the people who live in the balconied appartments above the cafe - the lights are on and peole are at home:)

Your campsite sounds like a treasure island, hidden away from the busy city. It looks beautiful and quiet, a fabulous place to stay. How do you find these secret places?! I love how you started the day, typically French! I love people-watching. xx

That looks absolutely the right place to stay, Diane! So handy for Paris, but much more fun to go back to and enjoy village/town life. And safer, too!

I'm inspired - must try to do something similar! By the way may I borrow your Miss Pettigrew when you've finished her please?

Excellent tip for visiting Paris. I'd never have thought of it but will definitely bear it in mind once the children are a little older. Thanks for sharing!

Wow! It all looks so lovely. Superb pictures - makes me want to go there myself!

Fantastique ma cherie x How superb Diane, you really transported me, Paris in Autumn is so lovely - well anytime really! I must check out your island,

It looks and sounds an excellent place to stay, must bear it in mind for the future. I just hope my future will extend far enough for me to carry through all my plans for it:):)

It sounds like a super place to stay. Economical, safe and handy to the city. I loved the way the men all take a french stick home every evening.