Being married to a policeman has its fair share of drawbacks - one of them being the shifts that he works. As a result of being a shift worker, we generally have his time off "planned" to the nth degree, but this is no guarantee that the planned event will happen - as a last minute shift change, or having to stay on after a shift has thwarted many a night out.
So last weekend was one of his precious weekends off - and we didn't have a plan! The weather on Saturday dictated that walking would not be pleasurable, so I thought we could head into Sheffield for some impromptu culture. We could do the galleries, or museums or whatever!
We happened upon much excitement outside of this new cafe/restaurant. They have apparently got a loyal following and have just moved premises. We had never heard of Gusto before, so we gave them a try. I can see why they have fans. the food and especially the service was wonderful. We wandered through Tudor square 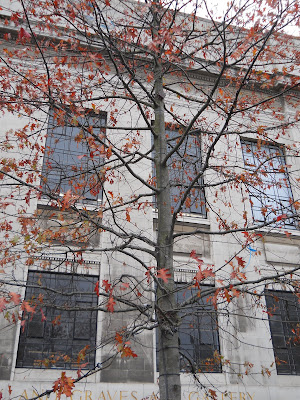 and decided to chance the afternoon matinee at the Lyceum where we managed to get excellent seats for the performance of Journeys End. It was a powerful performance telling the tale of very young men in the trenches of World War 1 - especially since we had driven over the Somme region last week. I wasn't on my own in having a blub at the end! 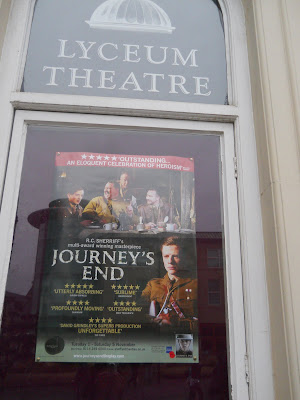 Then we battled our way home on the tram, through the hoards of people who were going to the "After Dark" fireworks display, football fans, and Britney Spears fans (of which there can't have been that many surely)!!!
Posted by Diane at Tuesday, November 08, 2011

Not heard of Gusto bet K has been though. Was in your neck of the woods yesterday working at local primary school. It was lovely.

I remember seeing Journey's End in Nottingham a very long time ago - you can tell how long ago as the leading actors Peter Egan and Christopher Timothy were young men - I found it very moving at the time. Gusto sounds good - your spontaneous day out sounds perfect:)

diane where is gusto?
it looks like it should be down Paradise square?

Sounds like you had a nice unplanned day except for the crowds on the way home.

Sometimes the days when you don't plan anything turn out to be the best, this happens with us too!

Sounds like you two had a good, nice time. Love the photos.

Sounds as though you had a good time, I was under the impression that my friend P was getting us tickets for Journey's End - looks as though she forgot about it!
Our book is mostly in local shops but Rare and Racy and Callaghan's the bookbinder on Devonshire St in town have a few copies. If you want one and can't get to Devonshire St I can post a copy to you.

It sounds like you had a wonderful time, perhaps you should have unplanned weekends more often.

Hi Diane, what a great weekend, Journey's End sounds like something I would enjoy too.
It is indeed a good idea to plan for those precious days off, one of my friends is a Paramedic and her husband is a Paediatrician, they both work shifts and get very little time off together.
Thanks for the message re the date for the Sprotbrough event - is it at the Church or the Community Centre?
Carol xx

You always have such a great time and never far from home. Gusto sounds interesting. t'other Diane

You've got to get the best out of every spare moment.

We've got a Gusto a few minutes from us, and I've eaten in the one in Newcastle too. It's always a pleasure!!!

Even if you did have to fight your way through Britney Spears fans to get home...it sounds like you had a lovely time! I can't think of anything better than spending time with the ones you love - plan or no plan. :)

Isn't it the best when you go unplanned? no expectations so no disappointments.

Sounds like a great day out! Spontaneous ones are often the best - and Gusto sounds great!

Sounds great Diane. Have you signed up for julie Arkell?

You manage to do the nicest things - even on the spur of the moment! Scrolling down your previous posts, we spent a fab week in St Valery sur Somme a few years back - lovely place.

Not bad for an unplanned day out! I'm just off to put my curlers in!
Lisa xx