From Cutthroat Bridge to the top of the world

Today, I had a walk with a bit of a grumpy old man. He was grumpy because:
a) He has pernicious Anemia and he's ready for his 3 monthly jab
b) Although it was his day off, he had been seconded to work the local Sheffield Wednesday/Sheffield United derby match - when he really wanted to go and watch it.
c) They cancelled his secondment at the last minute, and all the tickets had been sold!
d) It was an important match and he was not convinced that they were going to win (he always errs on the side of pessimism!)
So Sheffield Wednesday's loss was my gain and off we set to do a long walk on the Peak District border. I did have to listen to the pre-match waffling on the radio on the way, and I had to listen to his pre-match rants, and I think I did a great impression of someone who gives a damn! 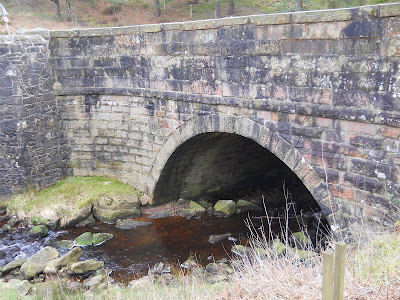 We set off from Cutthroat Bridge which is 7 miles from the centre of Sheffield. You can hazard a guess at the story behind the name and you won't be far wrong. The trouble when I let hubby decide on the walks we do is that he tends to favour very steep climbs! And this was a bit of a climb. 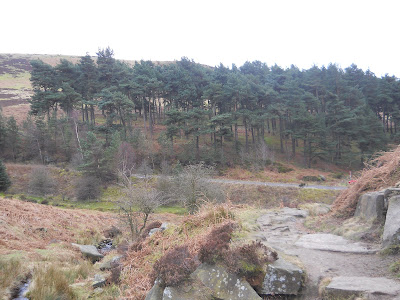 It had been blue sky when we set off, but it soon clouded over - however it was much warmer than yesterday. 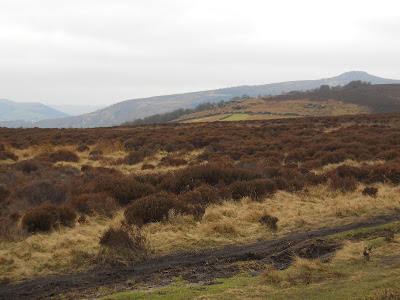 It may have been a bit of a climb, but the views down towards Derwent Dam and Ladybower Dam were beautiful - it felt as if we were on top of the world. I am so lucky to have this virtually on the doorstep. We also noticed that all the Dams (where our drinking water comes from) are not as low as they appear to be in the rest of the country. 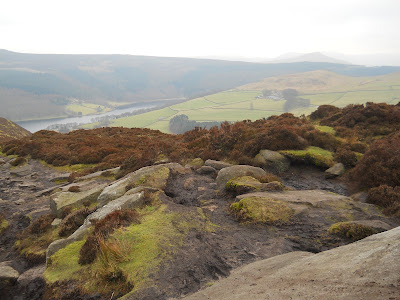 This side of the water is still in South Yorkshire. 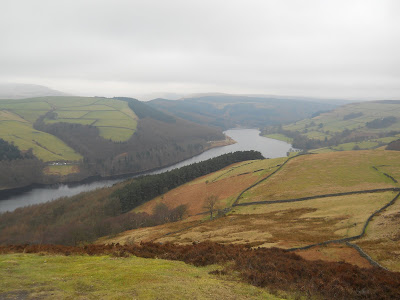 I believe the border is down there - The Yorkshire Bridge. 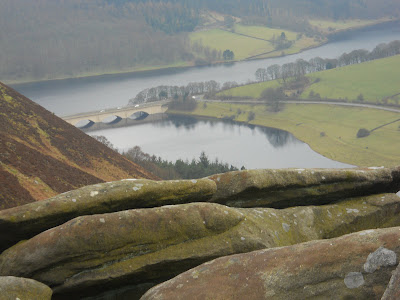 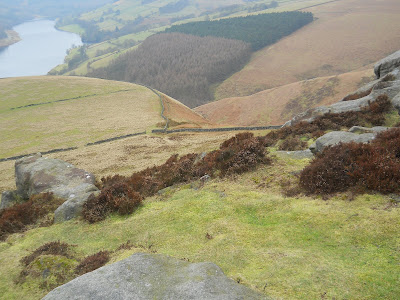 The 360 degree views down the valley's are just gorgeous, and all you can see are moors, hills and lakes. 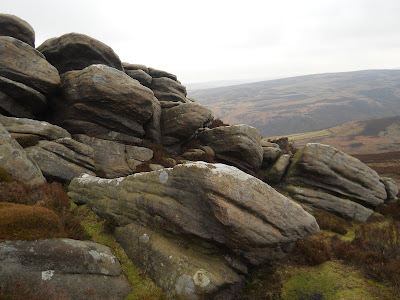 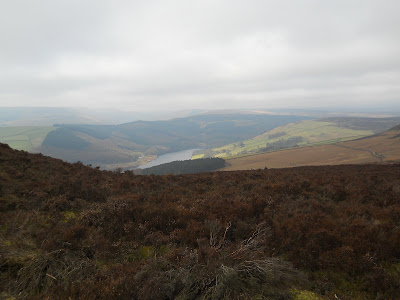 I spotted evidence of an old settlement on another hill. It must have been a very hard existence up here back then. 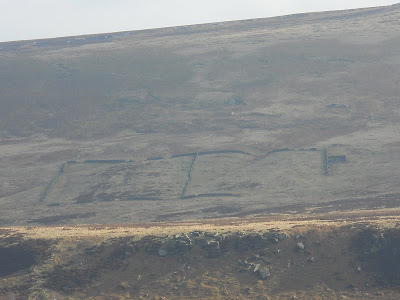 On our descent, we were treated to sunshine and clear blue skies. 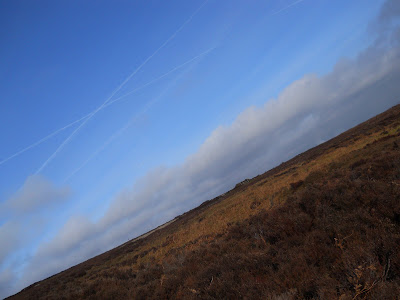 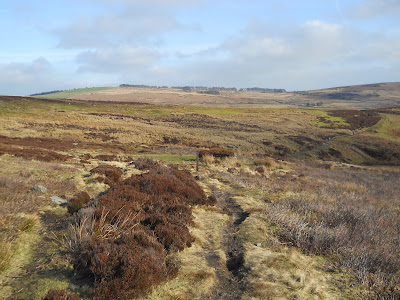 I found this ancient way marker which reads "Sheffield Road 7 Miles". If this was the road back then, it would have been hard to navigate, even on horse back. 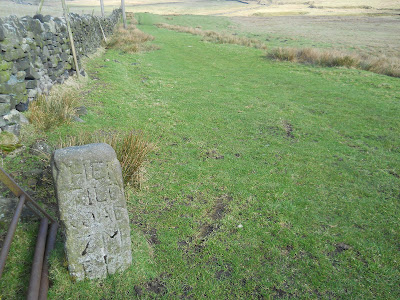 We made it back to the car just as Sheffield Wednesday scored the one and only goal of the match - so alls well that ends well. I'm sure the walk did his blood pressure more good than attending the match would have.
Posted by Diane at Sunday, February 26, 2012

Really lovely walk Diane, I was with you all the way. When our children were small we used to visit the Peak District for our holidays and always said we would go back one day. Perhaps this summer!

Thanks for the reply - It was the Lathkill Hotel I was trying to remember!

We always moan that we might not win and guess what we didn't yes the Two Bones Household is Blades through and through. Come on you red and white wizards! We did it on purpose you know Diane so you could keep your Manager - please let me assure you that actually I know very little about football other than lots of players have rather nice legs.

Spectacular views! Visited the Peak District years ago - such a beautiful part of the country!
June

Glad the best team won! Those views are completely stunning, bet you had lungs full of fresh air by the end and any cobwebs were blown away.
Lisa x
p.s the river we were by was the Itchen

The Peak District is such an outstanding area with gorgeous views everywhere.I count it a real privilege to have lived in the area several years -- and not in the towns either. I find it very calming to live in beautiful countryside and The Peak District is one of the best!

You aways have such nice places to walk, hope all is good now.

Beautiful pictures of a lovely area glad the outcome was good

What a super walk with lots of wonderful views. I love those waymarkers so full of history. Hope hubby is feeling less grumpy now his team won the match:)

What wonderful views, I bet that walk blew away the cobwebs.

What a lovely tour. I have seen Ladybower, the water was completely still and the trees reflected in its surface made my eyes go odd. It is a truly beautiful area.

Lovely walk, but I don't do hills, I like walking on flat land!

gorgeous views and I love your descriptions of everything Diane. I had forgotten how beautiful the countryside is so close to "home" (inverted commas because London has been home for 31 years!).

You certainly were high up by the looks of it! Glad to hear that the reservoirs aren't looking too bad. I'm not sure I could manage that climb - distance isn't a problem nor are legs and lungs but I get lightheaded when I do long steep climbs these days.