On Sunday, I had a special date in Sheffield with one of my longest standing school pals. We first met when we were 5 years old and her family had moved to my village. We went through primary and junior school together, but became very firm friends during the horrendous comprehensive school years. We lost touch a little as we both went our separate work ways, then reconnected when we had babies. Whilst we both have very different characters and personalities, when we meet up, we instantly become 15 year old Chicken Legs and Pixie again! Its wonderful! 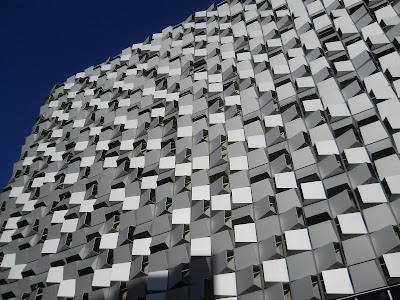 It was such a beautiful morning, that I thought I would photograph the city - I showed you it lit up at night last week, so here it is by daylight. 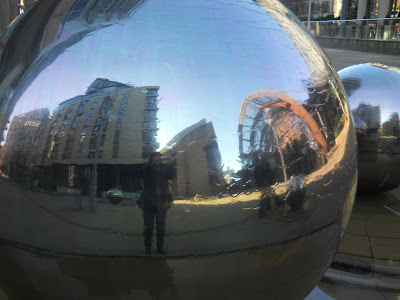 I love the old Georgian houses (now shops and offices) on Norfolk Row. I plan to find out a bit more of the history of this lovely old row. 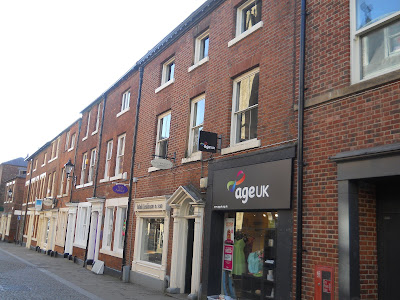 My first stop was at a lovely cafe here for breakfast with hubby and the young man (whom I had cruelly dragged out of bed). Although the tables were optimistically set outside, it was far too cold early on to sit here. 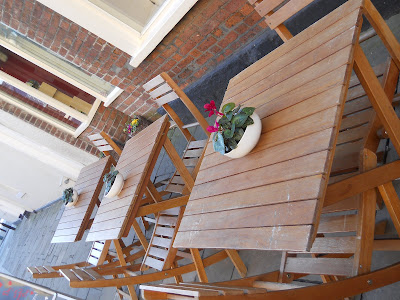 I love Sheffield early on a Sunday morning. The church bells ring from the Cathedrals and churches in the centre. This is the Catholic Cathedral on Norfolk row. 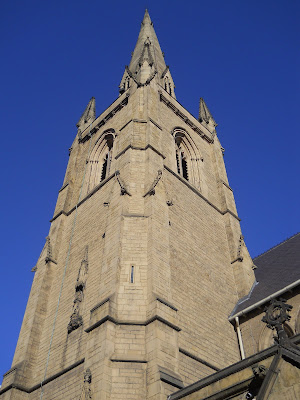 And the Methodist Chapel just around the corner. 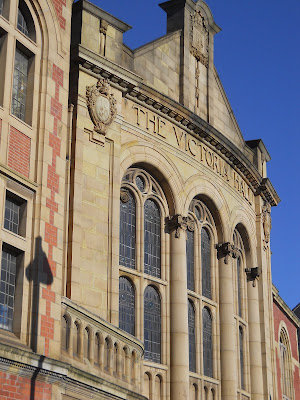 I passed the Stage Door outside of the Crucible. 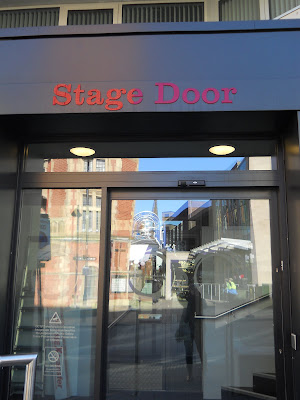 And I spied Mercury on top of the Lyceum Theatre, 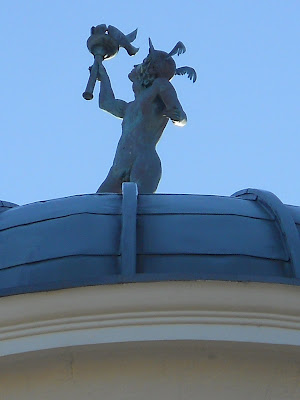 and the Egyptian who presides over the lovely Graves Art Gallery. 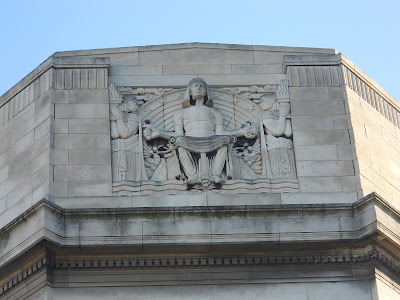 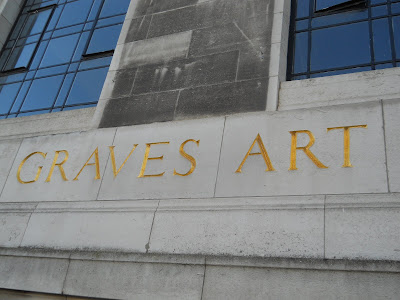 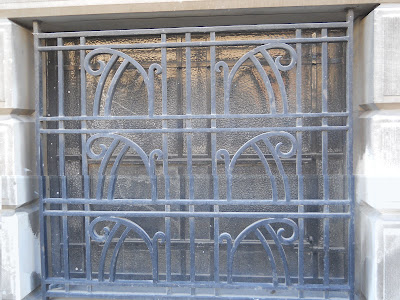 I wandered through the Winter Gardens and noted some welcome colour. 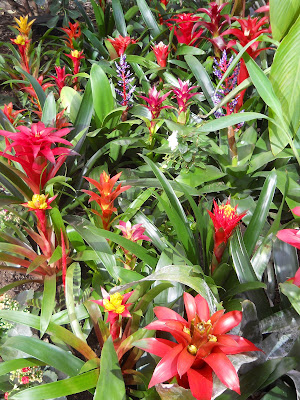 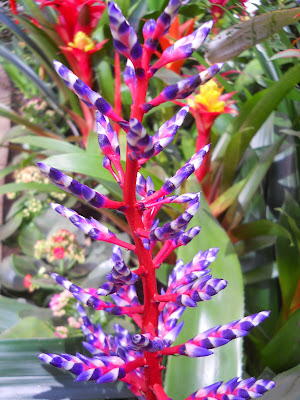 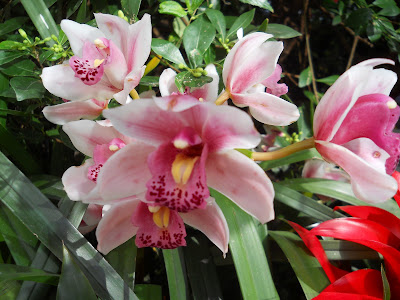 Sheffield, like many English cities and towns at the moment has many shops that are empty. We also have many very talented graffiti artists, and they have been commissioned to brighten up these spaces. 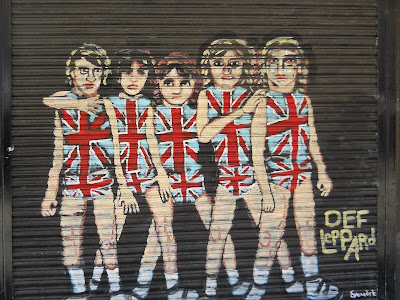 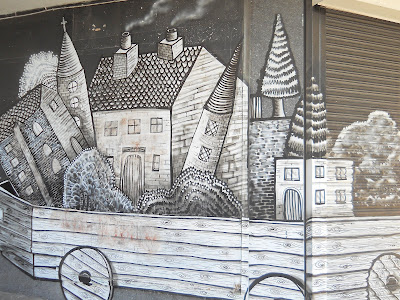 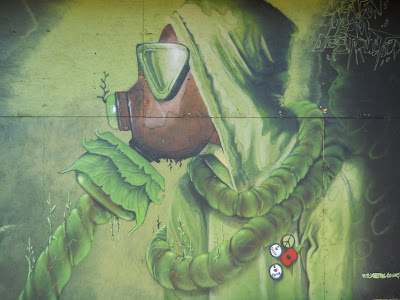 We took ourselves up to the top of one of the city centre car parks to admire the view. 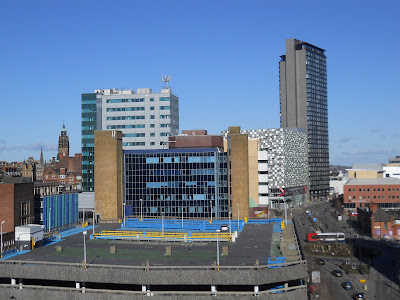 Many of the late 60's/early 70's buildings are earmarked for demolition once the recession is over. Building was just about to start on a massive city centre development when the credit crunch hit, so plans have been suspended for a while. 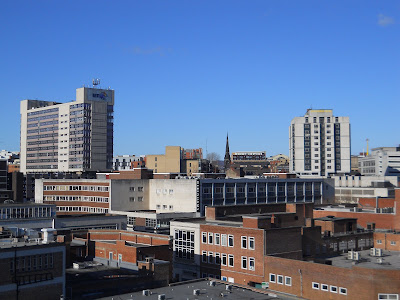 From up here we could see towards Norfolk Park and the Cholera Monument - which I have yet to explore. 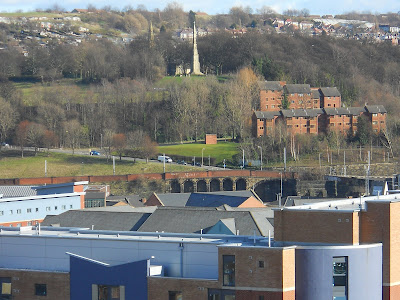 Up until very recent times, the city centre was a very industrial working city centre, and plenty of the old units still exist. Many of these here are old cutlery works from when Sheffield was the centre of the world cutlery industry. Many of these buildings are derelict, some have been re purposed, but I don't think any are still used for cutlery production (although we do have the odd one or two still in existence elsewhere in the city). 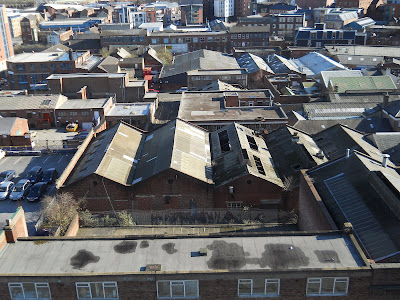 I quite enjoyed the trip to the top of the car park!
Posted by Diane at Monday, February 20, 2012

Thank you for the trip around the city.

When I was growing up my Mum worked in a solicitors' office on Norfolk Row and also attended the Methodist church as a teenager.

I must have a walk around the city centre, I haven't been into the city for at least 8 years.

It is my BF's birthday in May and I'll be coming over, I ought stay a few days.

It is fantastic meeting up with 'old' friends. I only have a couple of school day friends left. Thanks for sharing these lovely photos. t'other Diane

Sadly I've lost touch with my oldest friend but I see friends made at about twenty & the thirty years just rolls away when we meet.

I have lots of similar photos of sheffield from our visits! I love that graffiti you showed that is sort of black and white, If I recall correctly, I really noticed it beacuse there's a turtle on it somewhere, in a bit you didn't photograph!

We like a night out in Sheffield as but it's been 2 or 3 years since we went because premier inn never have the £29 room deals there anymore and I like to stay overnight and do some exploring while we're there! Still, it's not so far now wolverhampton is not involved!

I've never been to Sheffield - it looks like an interesting place. Love the Victorian buildings.
Liz @ Shortbread & Ginger

Never been to Sheffield but feel I know it a little now, your photos really do it justice, they are great.

Please tell - you are Chicken Legs aren't you?

A super post, I must get OH to take me to Sheffield, I've been past it enough times.

I always have a rush of nostalgia when you post a sheffield entry!!!

You are such a great ambassador for Sheffield. I too have been to the top of a car park to enjoy the view.
That graffiti is fantastic - art.
It is great to meet up with old school friends isn't it, the years just roll away.

I love the graffiti art its so good, lots of lovely photos from you day out.

The city centre looks different again in daylight. How lovely to meet up with friends who you have known for years.

Sheffield is a really interesting city - some of its industrial builds are beautiful.... Fab photos!

I try to meet up with my oldest friend at least once a year, this year we are having a week's holiday with our DH's. They (the DH's) laugh at us because we never stop talking, doesn't matter how long it is since we have seen each other, we just continue where we left off.
Great photos, love the Graffiti.
Carol xx

It is so sad about the demise of the Sheffield cutlery industry. When we first started selling cutlery we sold only Sheffield made cutlery. Now that has dwindled to almost nothing. I love your photographs and the way you pick out such unusual and attractive views and details.

Loved the tour and the pictures especially the angle the cheese grater was taken , it resembles an aerial view of Jerusalem !

Lovely tour and photos - I'm fascinated by the Cholera monument and the row of houses. One of my favourite paintings was (probably still is) in the Graves Art Gallery. Glad you had a super time with your friend too:)

Sorry you stopped me reading after the chickenlegs pixie comment!

Thanks for following me again
chickenlegs?

The graffiti is amazing, I love that kind of stuff.

You always find the little things, the unusual things to show us! Plus, of course, pics of Sheffield as seen from the top of the car park! ;)

Meeting old friends is always good, but I am ashamed to say I have lost touch with so many people I used to know really well.

How can you be such a cruel mummy???
Thank you for the tour!
xxxx

I love the graffit art, it does wonders for a place. I've never been to Sheffield, but your post has certainly planted the seed in my mind, so who knows oneday - but I need an excuse to go that direction :)

Love the bromeliads and orchids in the Winter Gardens - so nice to see some colour at this time of year. Have a good weekend, Diane. x