I found these photos at my mum's house today and thought I would share them with you.
My Grandparents were a huge influence in my life. We lived with my Mamas and Grandiwad when I was born, and we only moved around the corner from them later on. I loved being at their house. I could do what I liked there and they always had loads of time for me. They both loved the outdoors (which is where I get it from) and Grandad had worked outdoors all his life. He was from Lincolnshire originally and roamed around getting jobs on large estates as a woodcutter. 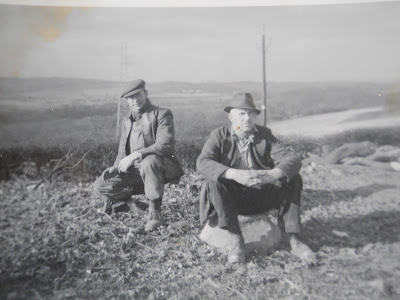 He is the one on the right in these 2 photos and is working for the Fitzwilliam family on the Wentworth Estate. A lot of the plantation woodlands around where I live were planted by my Grandad. In these photo's he is working with his very good friend whom I only know as "Deafy" (pronounced in a very northern voice as "deee-afi"). Deafy was so called becuase he had been in a very serious mining explosion where lots of men had been killed. He survived, but was left completely deaf. My Grandad thought the world of him and in his later years chose to spend Christmas with Deafy and his brother who lived next door to each other instead of us as they were such great company for each other. 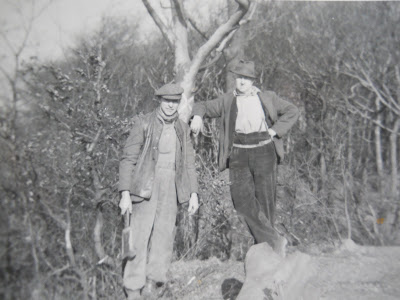 My Grandad never looked any different. He would have been about 50 years old in this photo below and he still looked the same when he died aged 93 years old. He is photographed here with my mums glamorous cousin Sylvia and my grandma. I also get my wombling tendancies from Grandad - although I will never be anywhere near as good! 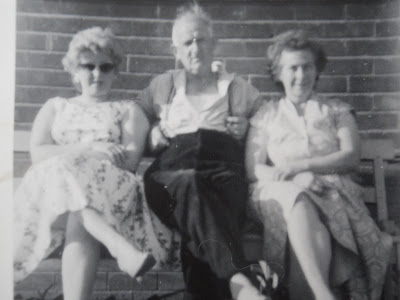 He was a few years older than my Grandma. When they met, she had been looking after the rest of her siblings and step dad after their mother's death. The others were all older than her and worked so she had to stay at home to look after the home and cook. She was treated a bit like Cinderella by her siblings. 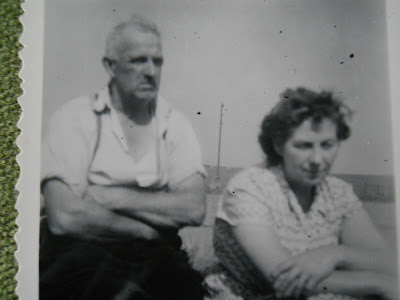 He looks a bit stern in these photo's and he could be when he wanted to be. But he was the most fabulous true gentleman with a totally wicked sense of humour and the most protective of husbands/father/grandfather and great grandfather. He adored my Grandma, and was devastated when she died too young aged 63. They had never had any time on their own as Mamas step father had lived with all their married life and had only died the year before her. To his credit, he brushed himself down and got on with his life, living it to the full and learning how to cook, wash and clean - things he had never done before (although he pegged his jumpers on the washing line by the shoulders and walked around looking like superman! - we never dared tell him!) 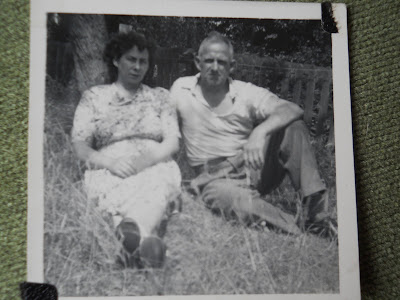 I remember my childhood with Grandma and Grandad being somewhere like between Larkrise to Candleford and The Darling Buds of May. They were what real grandparents should be and I consider myself to be so lucky that I had them living practically on my doorstep. I visited them almost every day of my young life. I think about them and miss them both every single day.
Posted by Diane at Sunday, February 19, 2012

wonderful memories and photos. It's so sad that she died so young though. My grandad died young at 68, and I miss him every day.

I do like a bit of family history and it's lovely to recall those memories.

How lucky you were to be so involved with your grandparents. I think it's a real shame that a lot of children these days (mine included) don't see as much of their grannies and grandpas as they should. We live 250 miles away from my folks so my kids haven't had them at all really.

Such a sweet record of your heritage and the lives that helped shape yours. No greater tribute for a grandparent! Thanks for sharing your story and the photos.

I often wonder if grandparents realize how much influence they have on their grandchildren. Great post. What's "wombling"? Don't think I've heard that before.

Lovely post. I was lucky to have close, caring grandparents too, wished they could have stayed around for a lot longer.
Carol xx

Such lovely photos, and great story's to go with them.

A lovely story, I only knew my mother's parents and spent time with them almost every day as a child - memories to hold forever x

What a wonderful post, Diane. You have some lovely memories of you grandparents. You are so lucky to have known them for so long - all four of my grandparents had gone by the time I was 12 - both grandads before I was 5 so I don't really have many memories of either of them. I love looking at old family photos - how times have changed:)x

Super post I do love family history and they sounded wonderful.

What a lovely post. It's amazing what wonderful memories photos can bring. Digital cameras are such a great invention, but I still always get my favourite photos printed out and put in to an album. Your grandad lived to a ripe old age, so sad that your grandma died so young.

What a lovely post, you wrote it in such a lovely way too.

A very moving post today Diane. What lovely memories you have of your grandparents.

I knew only one of mine, my Father's Mother, a tiny little Welshwoman who loved a flutter on the horses and would tell anyone's fortune by tea-leaves. Sorely missed.

Such a lovely post, I loved all the old black and white photos. Thanks for sharing your precious memories :-)

Wonderful childhood memories Diane. I love to read about 'real folk' and their lives. x

How fabulous to have such happy memories about your grandparents, they sound just like how you would love your nan and grandad to be. You can certainly see the family resembalence between you and your Mamas.
Lisa x